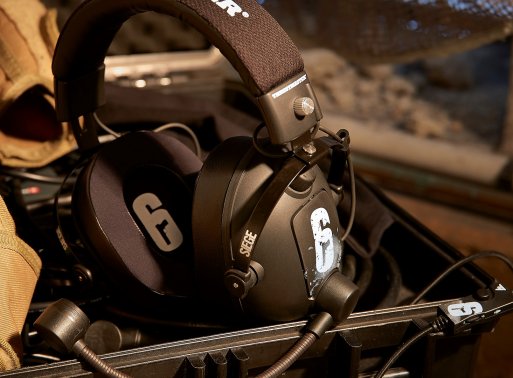 Today, Thrustmaster announced that two new headsets have been developed for Rainbow Six Siege that will coincide with the release of the game’s next DLC. These headsets are exclusively licensed and endorsed by Ubisoft. The two headsets available are the T. Assault Siege Collection Headset and the Y-300CPX Siege Collection Set.

The T. Assault features 50mm analytic drivers in order to give players every advantage in the field. The sound pressure level prevents distortion at a rate of less than 1%. The microphone is unidirectional, fully adjustable, detachable, and boasts a signal-to-noise ratio of 56dB. The T. Assault is built with a metal skeleton and 25mm ear cushions in order to provide hours of comfort and durability. The volume control for in-game sound is located on the earcup, while the microphone volume control is located on the cable.

The Y-300CPX is a headset designed to give players flexibility at a great price. The Y-shaped design is unique and maximizes comfort, while its earcup design acts as a bass amplifier. This model shares the same microphone as the T. Assault, along with 50mm drivers that provide clear sound that gets contained by the large cushioned earcups. This headset allows gamers to adjust the microphone volume, audio levels of the game, and even the bass.

Both headsets will be available at the same time as Rainbow Six Siege’s December DLC, with the T. Assault being priced at $99.99, and the Y-300CPX being priced at $59.99. The T. Assault will be compatible with PS4, Xbox One, and PC, while the Y-300CPX will be compatible with PS3, PS4, Xbox 360, Xbox One, Nintendo Switch, PC/Mac, smartphones, and tablets. Make sure to check out the images above and stay tuned to Gaming Trend for more news.