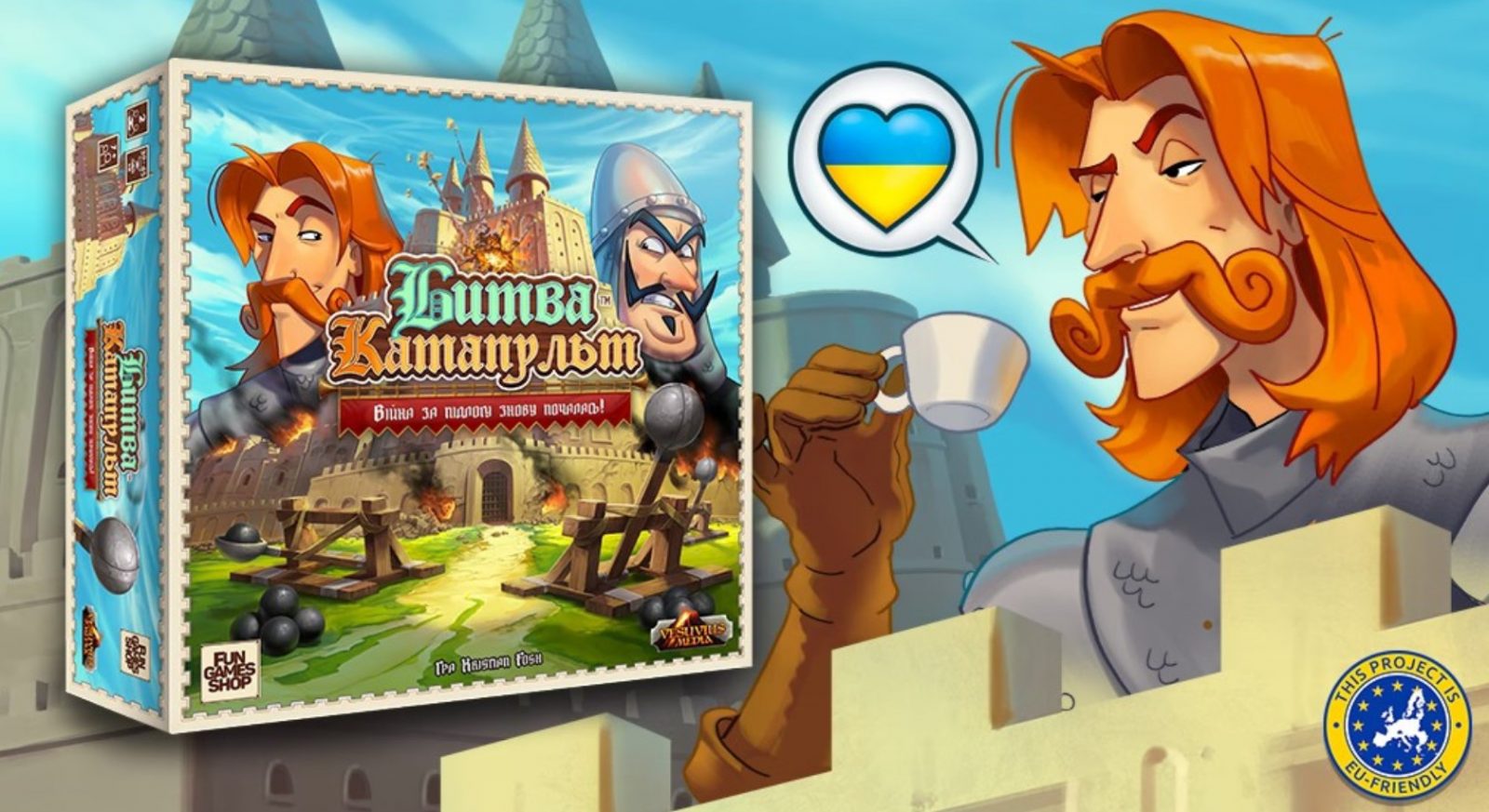 Catapult Feud Ukraine edition is available now on Kickstarter and has already raised over $10,000. The funds raised will go towards the cost of production and to help rebuild some of what was lost during the war. You can read a statement from Vesuvius Media below:

“This is a very special Kickstarter campaign,” said Konstantinos Manos, CEO of Vesuvius Media. “Many of us are watching the war in Ukraine from afar, see the devastation, and want to help. This is one way we can.”

Andrii Pertsov is the owner of Fun Games Shop in Kyiv, Ukraine. Last year, Fun Games Shop partnered with Vesuvius Media to publish Catapult Feud for the Ukraine market. All was going great, the games were produced in January, and on their way to Ukraine. Then, on February 24, war broke out, leaving the games in limbo and a country in ruins.

“From the first days of the war, we converted our warehouse into a community shelter for families to use. After several days, we managed to get our families to the city of Lviv, leaving a dire situation behind,” said Pertsoy. “We have no idea when we will be able to return.”

Together with Vesuvius Media, Fun Games Shop launched the Kickstarter campaign for the Ukrainian edition of Catapult Feud on Sunday, March 13. The funds raised will go towards regaining the costs of production and to help rebuild some of what was lost during the war.

“We are overwhelmed by the support and words of encouragement from the backers,” said Pertsoy. “Some backers have even asked if they can donate their games to Ukrainians. This is amazing.”

Designed by Kristian Fosh, Catapult Feud is a 2-player game of last person standing. Players choose one of two families, either Chaufort or Cunningfields, then build a castle to fortify their troops. Using a catapult, players launch rubber boulders in an attempt to knock over their opponent’s troops. When all troops of one family are knocked over, the battle is over. The winning family must have at least one troop standing upright.

There is no text on the cards or components of Catapult Feud. Although the rulebook of this edition is in Ukrainian, backers can download and print the rulebook in English, French, Spanish, or German. Backers will also have the option to donate their game to a Ukrainian child, in the pledge manager, after the campaign.