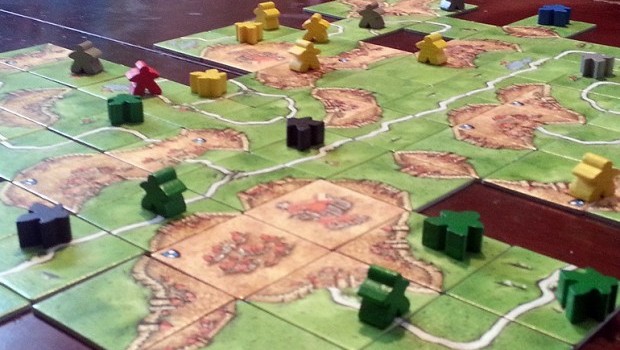 A while ago Z-Man announced that they would be taking over publishing for the entire Carcassonne line.  While I thought this was interesting news, I didn’t think much of it at the time.  Now Z-Man has announced that Carcassonne will be carried in Toys “R” Us stores, which is a huge win for gamers everywhere.

Z-Man Games, the publisher of award-winning board and card games is proud to announce that the award winning game Carcassonne is now available in Toys “R” Us stores across the US.

Carcassonne is part of the new generation of board games, following the same trend as the vastly popular Settlers of Catan. Carcassonne is one of the leading games in this new wave of board games that is now reaching a vaster, mainstream, public. Since 2001, more than 7,000,000 Carcassonne products have been sold worldwide; the game has been translated in 24 languages; and it also has an iPad and iPhone app. With 7 million copies sold, that’s more than 200 million meeples around the world! If you were to put them hand in hand, they would spread over 1800 miles! That’s as far as the distance between Las Vegas and Chicago! This shows the wide spread of Carcassonne’s popularity around the world and the fact that Toys “R” Us has decided to pick-up the game is just a confirmation of its immense success among gamers and casual players. Carcassonne is the ideal game to introduce someone to board games; since it is simple yet challenging enough that a new generation of players will want to play over and over again.

We are proud to be playing a leading role in the renaissance of board games with the success of Carcassonne. With the game now being available at Toys “R” US, we are convinced that its popularity will continue to grow, since it is now accessible to a wider audience.

While we have seen some games start to become available at stores like Barnes and Noble and Target, getting Carcassonne into Toys “R” Us is a good first step.  Hopefully this will become more commonplace, and we’ll see better and more varied board games in even more stores.