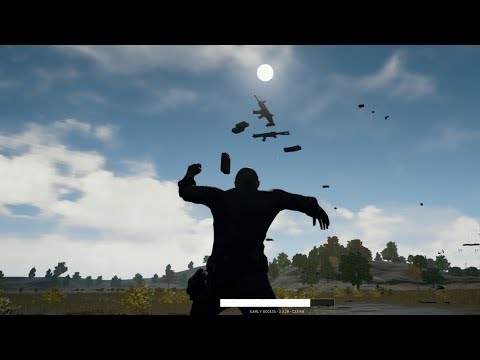 We’ve been playing a lot of PLAYERUNKNOWN’S BATTLEGROUNDS lately, and we’ve learned quickly that visibility is everything in this game. Having yourself exposed in a field is a surefire way of getting yourself killed, especially in the late game. Keeping doors open inside a building you’ve fortified gives outside players more opportunities to track your movements through windows. Facing an outside wall with your gun equipped could flag enemies down to your position, courtesy of your rifle’s barrel clipping through the building wall. PUBG players are on the lookout for any sign of a potential threat, and their acute awareness of the game’s nature has been swiftly honed.

Players have taken to implementing some interesting tactics to account for this dynamic. Most high-level players are turning their graphics sliders all down to LOW so that they can more clearly see players hiding in the grass (which disappears on low settings). I’ve once been told to ditch my bulky Level 3 backpack in the late game so as not to stick out while crawling through an open field.

But I’ve yet been told to activate first-person mode while in the plane to activate a see-through-walls bug. Nevertheless, I did just that, and the results were pretty hilarious.

During one of my more recent rounds of PUBG, after landing in the military base with my four-player squad, I realized that there were no buildings—nothing but prairie-like fields and a bunch of floating loot. My friends were experiencing the same game they’ve played dozens of times while I was floating in and out of buildings (with plenty of difficulties). After mistakingly clipping in and out of the invisible walls, I began to instruct my teammates in which buildings to loot, which compounds to stop at for resources, where to find cars hidden between buildings—nothing could be kept from my all-seeing eye!

It wasn’t long before we realized I would be able to see people through walls as well! Coming upon this revelation, we quickly attempted to make our way towards the circle to bring the havoc of omniscience to the rest of the server. Unfortunately, my game crashed well before we reached any other players.

Stay tuned as we attempt to replicate this godly bug!