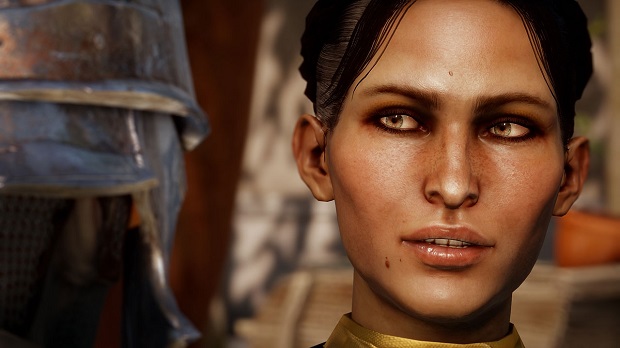 As part of Bioware’s ongoing character showcase blogs, the studio has release details about a new character in Dragon Age: Inquisition called Josephine.

Like returning character Cullen, Josephine will act as an advisor to the Inquisition as opposed to a party member.

Writer Sylvia Feketekuty describes Josephine as a diplomat, but an optimistic one.

“Josephine has worked for years as an ambassador in the royal courts in Thedas. She’s very familiar with Orlesian politics, which comes in handy. She’s an excellent mediator and speaker. Crucially, she knows just how hard it can be to change people’s minds, and how much someone’s ego is tangled up in being “right”. Josephine prefers to gently steer people into agreement whenever possible, but she’ll take a stand when needed. There’s occasionally an iron fist beneath that velvet glove.”

In her advisor role Josephine will oversee the Inquisition’s politics while the party is out fighting according to Feketekuty.

“Josephine is the head ambassador of the Inquisition. She handles diplomatic disputes on the Inquisitor’s behalf, raising the player’s reputation and spreading the Inquisition’s influence throughout Thedas.

Or in less fancy terms: Josephine does a lot of work that’s very important, and also very boring. Keeping a huge organization like the Inquisition afloat takes negotiations and paperwork and endless politics, but Josephine lives for that kind of stuff. She prides herself on having the Inquisitor’s back (for example, making deals with the right people, or heading off power plays by other nobles) so the Inquisitor is free to make the decisions that actually shape the world.”

Within the interview, Feketekuty confirmed that Josephine will be a bisexual love interest, available to all of the game’s four playable races.

“It was also fun to write a romance again. And because I know people will ask: You can try to win Josephine’s heart as any race or gender. I think we ended up with some fun moments whether you’re trying to romance her or just be her friend, but there’s one particular scene that I love.”

“She has a good relationship with Leliana. They’re old acquaintances, and they both know the other is very good at what they do. That said, I think it is a relief for them to see: “Oh, our work styles mesh after all. Phew!” That’s not to say they always agree with each other, but they’re a good team.

Meanwhile, while Josephine and Cullen respect each other, Josephine would always rather work towards a diplomatic solution while Cullen doesn’t always think it’s the practical choice. Josephine can get impatient with that attitude and the clash in their philosophies.”

Bioware has been showcasing Dragon Age: Inquisition for awhile now, such as returning character Cullen and newcomer Dorian.

Dragon Age: Inquisition will be coming out on PC, PlayStation 3, PlayStation 4, Xbox 360 and Xbox One on October 7th.