Minsk, Belarus / Vienna, Austria, November 10th, 2021 – Ladies and Gentlemen, the next President of the United States of America: You!

In this upcoming story-driven satirical thriller, you are elected to the most influential position in the world with just one goal in mind: advancing your own agenda. With a history as a shady, rich, and ruthless businessman, you’re under investigation by the FBI. They don’t have proof yet, but eventually, they’ll dig something up. Being president grants you immunity and to keep it that way, you’ll have to pass the 28th Amendment to the Constitution, granting you lifelong immunity!

Manage your team of skilled professionals and make sure the amendment is passed – no matter the cost. How you spend your time in the Oval Office is up to you. Can the sinner become a sort-of-saint and make it look like he’s actually a good president? Or will the people call you out for the crook that you are and cause your approval ratings to sink to rock bottom?

Experience this dark and gritty political thriller when This Is the President launches on December 6th, 2021 on PC. 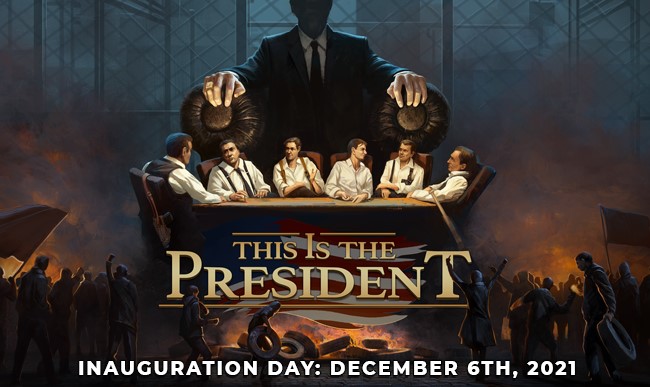 This Is the President on Steam: https://store.steampowered.com/app/730430

About This Is the President

This Is the President is a satirical thriller, where the President of the USA manages the country like a mobster and tries to escape justice for past crimes. Change the fabric of the United States Constitution by persuading, blackmailing, bribing, and bullying a large part of the political system into granting you lifelong immunity.

Manage your approval rating, cash and crew unlike any US President before – stay on top of your presidency by any means necessary.

Experience a compelling interactive narrative with a wide variety of choices and story branches. Will you end your term on your terms or are you just a pawn in a bigger game?

Rule the country as a true mobster would with a shadow cabinet that is feared and respected on a global scale.

Stay tuned to Gaming Trend for more info on This is the President and for all your gaming, tech, and entertainment news!