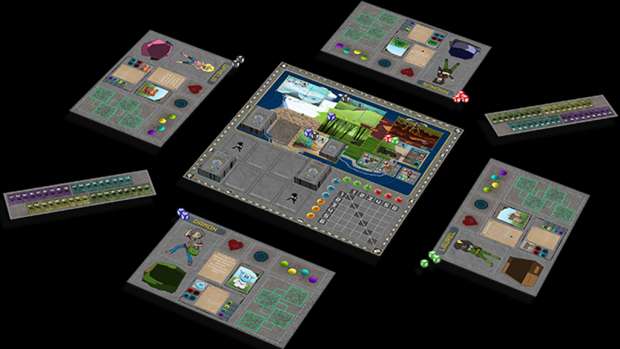 The Pokemon phenomenon (and to a lesser extent Digimon) has introduced video gamers on how to increase the stats of their captured fighters.  While that has translated to a successful card game, there really haven’t been any board games to simulate this.  Kid Loves Tiger wants to give that feeling to players with their Kickstarter Beast Masters.

Beast Masters is built on the foundation of classic video games like Pokémon, Monster Rancher and Digimon. In the game, players take on the role of a young new trainer, looking to become the very best! Players will spend months training their beast, using a unique dice placement board with various training regions, adventures, threats and duels, leading into a grand seasonal tournament.

“I wanted players to FEEL like they really were invested, not just in their Trainer and how famous they got, but rather the Beast, how many Techniques the Beast knew, and making each one have their own “feel” in regards to dueling and training”, Designer Chris Peach says.

Beast Masters can be played by any kind of gamer. The game has a ruleset that is easy enough for new gamers and gateway gamers alike. The game also has enough complexity and depth for experienced gamers to dig their teeth into strategies and meta’s from game to game, finding the right training combos for each Beast. The best part about it says Chris, is the blend of familiar mechanisms but displayed in an original manner. Dice Placement has never been so fun.

Beast Masters is a game for 2 – 5 Players, ages 13 and older, with a runtime of 60 – 90 minutes. The game includes a Rulebook, tons of different Cards, Multiple Trainer Boards, 30 Custom Dice, 40 different translucent cubes to track energy. The game also has 8 Free Beast Cards and Beast Trait Cards for their Kickstarter Backers.

Beast Masters launched on Kickstarter on Tuesday February 7th at 3:00 pm Central time and will end on Tuesday the 28th of the same month! Don’t miss your chance to get a copy!

I admit I thought that this would have been aimed for younger children, but hopefully they can play with the assistance of an adult.  Look for more details on their Kickstarter page.