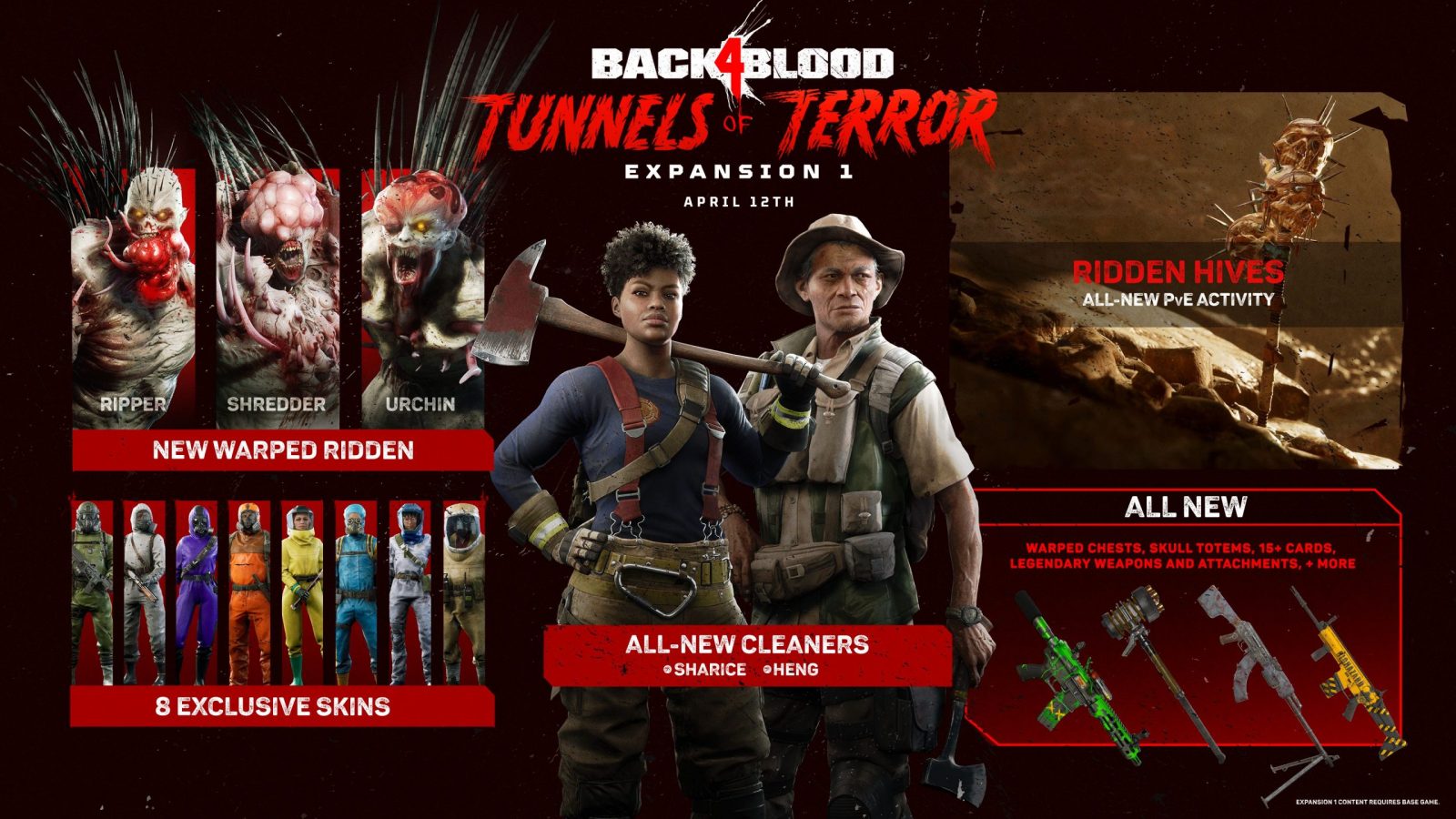 Back 4 Blood just hit a huge milestone and announced that over 10 million people have played their game. Alongside that announcement they revealed that the game’s first DLC expansion, Tunnels of Terror, will be released on April 12th, 2022. The Tunnels of Terror DLC will add a new co-op activity known as Ridden Hives, where players will explore dungeons below Evansburgh that are infested with Warped Ridden, a new ridden type. You can read more below:

Lake Forest, Calif. and Burbank, Calif. – March 1, 2022 – Developer Turtle Rock Studios and publisher Warner Bros. Games today announced that over 10 million players have played Back 4 Blood, 2021’s best-selling new IP on consoles*, since its launch last fall. This milestone is met with new details for the game’s first major downloadable content (DLC) expansion, Tunnels of Terror, which will be available on April 12 as part of the Back 4 Blood: Ultimate Edition, Back 4 Blood: Deluxe Edition, Back 4 Blood Annual Pass, or via standalone purchase. The expansion will feature the new Ridden Hives PvE cooperative activity, new playable Cleaners and Ridden variants, exclusive character and weapon skins, and more.

“To achieve such a milestone in the short time since the launch of Back 4 Blood is a historic event for our studio and this franchise,” said Turtle Rock Studios President and General Manager, Steve Goldstein. “As we look ahead, we’re excited to keep the momentum going with our upcoming expansion, Tunnels of Terror, which will offer more cooperative content for fans to continue cleansing the world of the Ridden.”

When the Back 4 BloodTunnels of Terror expansion arrives on April 12, teams of up to four friends can jump into an all-new co-op activity known as Ridden Hives, where they will explore seven different dungeons full of labyrinthine tunnels below the depths of Evansburgh that are infested with a new Ridden type, Warped Ridden. To claim exclusive loot and rewards only offered in Ridden Hives, players must outmaneuver and overcome the daunting new Warped Ridden, including the landmine-setting Urchins, monstrous Shredders, and damage-dealing Rippers. The new Warped Ridden variants are also playable in PvP Swarm mode.

The upcoming expansion introduces two new playable Cleaners – Sharice, an axe wielding firefighter, and Heng, a tough as nails, no-nonsense restaurateur. Also included in Tunnels of Terror are eight exclusive character skins, seven new legendary weapons, 12 new weapon skins, new cards, and more. The expansion will coincide with the release of the No Hope difficulty setting, a free update adding an extra level of challenge for elite players. Please note, all playable content included in the Tunnels of Terrorexpansion will be accessible by all players in a party as long as one player in that party has purchased the expansion.

Additionally, there will be no microtransactions of any kind, cosmetic or otherwise, added to the game as part of this expansion or any future content update.

Back 4 Blood is a first-person co-op zombie shooter from the creators of the critically acclaimed Left 4 Dead franchise and is available now for Xbox Series X|S, Xbox One consoles, PlayStation®5 (PS5™), PlayStation®4 (PS4™), and PC. For more information about Back 4 Blood, and to begin playing right now, please visit: www.Back4Blood.com.

*Based on U.S. tracking from The NPD Group.