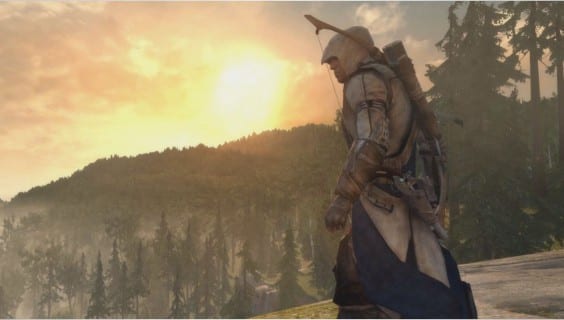 We’ll kick off our coverage this morning with a sweet trailer showing Native American Ratohnhaké:ton’s journey from young man to Assassin for the war against the tyranny of the British Army. The game is coming up in just a few weeks, so we’ll soon be able to see this story unfold for ourselves, but here is a little bit more about the trailer in the mean time:

Get a glimpse into our hero’s tale and discover the events that led to the creation of a master assassin and the eventual birth of a new nation. Get a deeper dive into Connor’s background, motivations and storyline, and learn how this all-new hero ushers in an entirely new chapter in the Assassin’s unforgettable saga.

I love the new combat mechanics in this game, and I can’t wait to take them for a spin once again. For those wondering how it fares on the Wii U, I saw it running side-by-side with the 360 version and they look identical. No matter which platform you choose, Assassin’s Creed III is looking like an absolutely sure bet. Look for it to hit shelves as a Wii U launch title, and for all other platforms (including offshoot Vita title, Assassin’s Creed: Liberation) on October 30th.