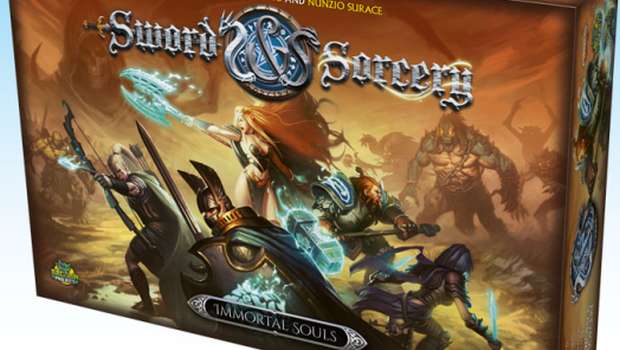 While Gen Con and Essen seem to be the big conferences that get a large number of new releases.  However, Ares Games has announced that at Origins Game Fair 2017, they’ll have several new games previewed at the show.

Ares Games will attend Origins Game Fair 2017 (Booth GH102, June 14-18, Columbus, Ohio), this year as a sponsor of the show, presenting the long-awaited epic-fantasy cooperative board game Sword & Sorcery and four new airplanes in the WW1 Wings of Glory line. Three games coming this Summer will be showcased at Ares’ booth – the hidden movement, deduction and adventure game Hunt for the Ring, the racing and betting game Divinity Derby, and This War of Mine the Board Game, tabletop adaptation of the award-winning video game.

Visitors will have the chance to try games recently released by the company, such as the WW2 Wings of Glory Battle of Britain Starter Set, the family game Quickpick – Mutant Dinosaur Park, and the new edition of the horror card game Stay Away, and can get special items as the promo card “H.P. Lovecraft” with any purchase of Stay Away or the promo card “Bubi” with Last Friday, along with other promotions and special deals.

In addition to the demos at the booth, many events are scheduled during the five days of the convention. Buckeye Gamers in Flight will run events of WW1 and WW2 Wings of Glory and Sails of Glory, with prize support from Ares. Attempts of new world records of most players in a game will be held by Ares. On Friday, from 10AM to 12PM, for WW1 Wings of Glory, and from 12PM to 2PM, for WW2 Wings of Glory. On Saturday, it will be time to try to break the world record of Sails of Glory, at 10AM. The schedule also includes 9 Sword & Sorcery’s events and 4 Galaxy Defender’s missions.

NEW GAMES AT THE SHOW

Sword & Sorcery – Funded last year on Kickstarter with over $500,000 pledged, Sword & Sorcery will debut at Origins, with demos at the booth and five events, and will release in stores in early July. In the game, up to five players control heroes with unique powers, fighting together against the forces of evil – controlled by the game system itself – to save the kingdom and break the spell that binds their souls. The heroes are legendary characters brought back to life by powerful sorcery. Weakened by the resurrection, they grow stronger during their story-driven quests. By acquiring soul points during battles, the heroes’ souls regenerate, restoring their legendary status with multiple powers, magic and soul weapons, and powerful artifacts.

The Starter Set, Sword & Sorcery – Immortal Souls, features 28 ultra-detailed 32mm scale figures and modular boards, several decks of cards, Solo Play, high character customization, sophisticated combat and magic system, and quests designed to be completed in about 90 minutes or less. In addition to the starter set, two accessories for the game will be released – S&S Custom Dice Pack and S&S Doors & Chests. The game will hit the stores after the Kickstarter backers’ fulfillment has been completed in late June.

WW1 Wings of Glory Airplanes Packs – Four new WW1 aircraft for the popular game will be released at the show, each of them featured in three different versions: the French Nieuport 17 (piloted by Francesco Baracca, Charles Nungesser, and Bill Thaw/Raoul Lufbery), the German Albatros D.III (Hermann Frommherz, Kurt Gruber, and Manfred von Richthofen), the Austrian UFAG C.I (161–37, Flik 62/S, and 161–138), and the British RAF RE.8 (30 Squadron, Marsh/MacKay Dempster, and 59 Squadron). The new WW1 Wings of Glory Airplane Packs include specific cards with optional rules and game information specific to each model – such as optional equipment (rockets, machine gun), special rules for individual airplanes, ace cards and skill cards.

The Hunt for the Ring – A new game coming to the War of the Ring line, Hunt for the Ring is a hidden movement, deduction and adventure game, for 2 to 5 players, that recreates the initial chapters of “The Lord of the Rings”. In the game, one player must bring Frodo Baggins – the Ringbearer – and his hobbit friends from their home in the Shire to the sanctuary of Rivendell, where the fate of the One Ring will be decided. Using secrecy and the help of powerful allies, the Ringbearer must escape the chase of the Nazgûl, which is controlled by up to four other players.

Hunt for the Ring is designed by Francesco Nepitello and Marco Maggi, co-designers of the award-winning “War of the Ring” board game, and Gabriele Mari, designer of “Letters of Whitechapel”, “Mister X” and “Garibaldi”. The game features cover and character art by John Howe, seven highly–detail miniatures sculpted by Bob Naismith, and a beautiful game board by Francesco Mattioli. Due to release in August 2017.

Divinity Derby – A party on Mount Olympus quickly turn into a crazy race of mythic flying creatures, where the gods bid on (and influence) the outcome of the race, with the Olympic “All-father”, Zeus, as the ultimate judge. In Divinity Derby, a fast-playing card-driven game, each player assumes the role of a god, betting on a race among mythological flying creatures, and plays with two hands of cards, sharing a cardholder with each neighbor, conspiring against – or with – the other players.

The game, for 3 to 6 players, age 10 and up, is designed by Carlo A. Rossi and features a colorful gameboard, six miniatures modeled by master sculptor Bob Naismith, over 100 cards (illustrated by Ukrainian artist Denis Martynets), card holders and tokens. Due to release in September 2017.

This War of Mine the Board Game – Cooperative game about surviving in a war-ravaged city, based on the gripping survival video game by 11bit studios. Players are part of a group of civilians trapped in a besieged and conflict-ridden city, enduring many hardships that test the essence of humanity. To survive, they need to make tough ethical choices, which have consequences that last the rest of the game.

This War of Mine was adapted to tabletop by the game designers Michał Oracz and Jakub Wiśniewski, and funded with a campaign on Kickstarter that raised £621,811 in pledges, supported by 9,627 backers. Published by Galakta Games, its English edition will be distributed by Ares Games worldwide, excluding Europe, from August 2017.

It looks like Ares Games has a great lineup, with new games coming out each month for the next couple of months.  If you’re at Origins, you’ll definitely want to check them out!  If you can get in on the Galaxy Defenders missions, I highly recommend it.

Related Articles: Divinity Derby, Sword and Sorcery, Tabletop, The Hunt for the Ring, This War of Mine The Board Game, WWI Wings of Glory
Share
Tweet
Share
Submit