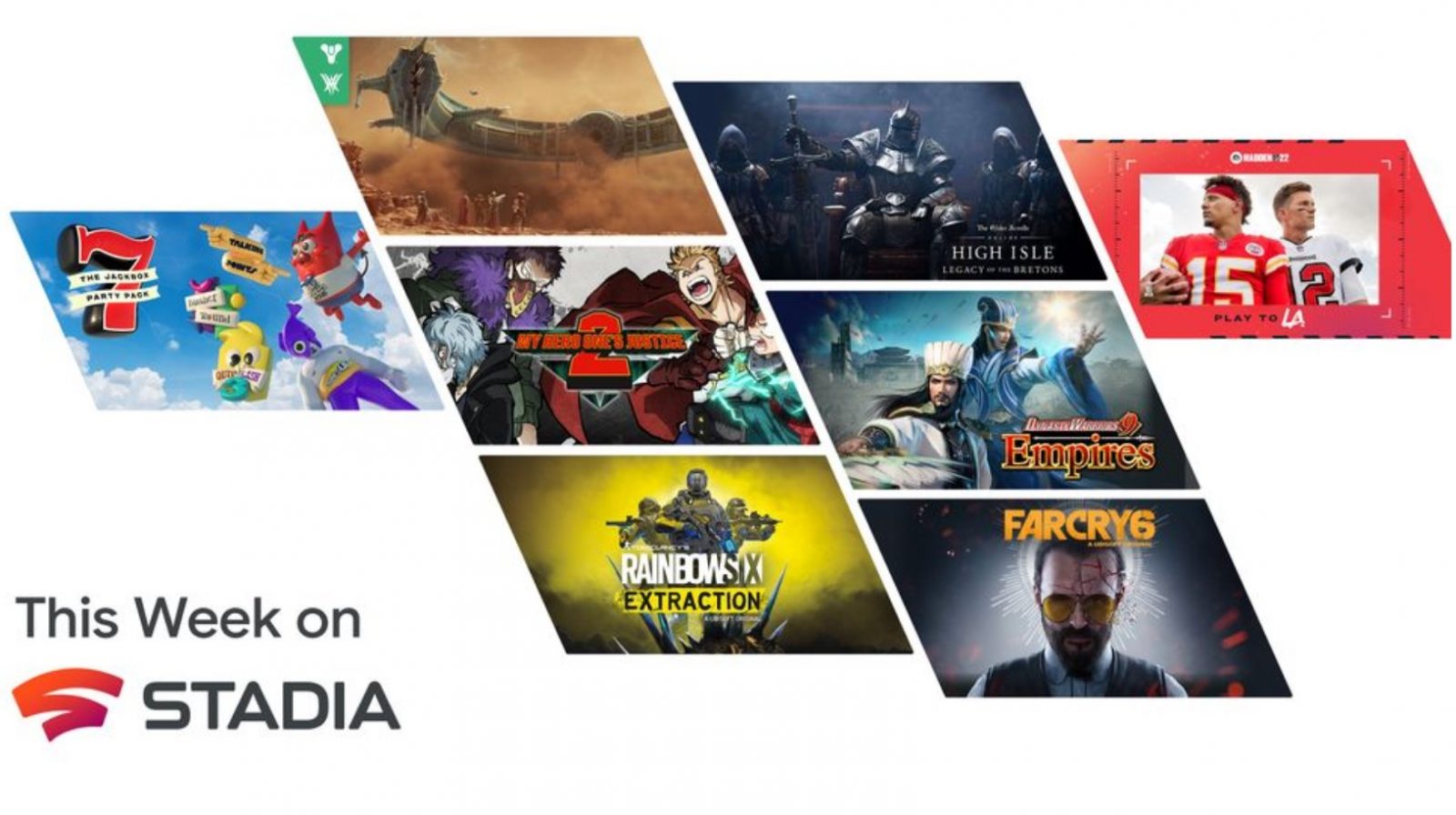 What’s in store for Stadia this month? A ton, judging by the press release below! My Hero One’s Justice 2, Dynasty Warriors 9 Empires, Rainbow 6 Extraction demo, Jackbox Party Pack 7, The Elder Scrolls Online: High Isle, and more! Read below for the full list:

It’s game over for the year’s first month, but here at Stadia we’re just getting 2022 started. We’re kicking off the month of chocolates and love by extending some sweetness to our dear Stadians.

The battle for justice continues, but this time the fight gets bigger, badder, and quirkier in MY HERO ONE’S JUSTICE 2.

Play through the anime as you relive iconic scenes! Pick up after the finish of MY HERO ONE’S JUSTICE and see what happens to Deku and the class at UA.

Grab it on Stadia starting February 15.

Don’t miss the chance to engrave your name in battlefield lore when DYNASTY WARRIORS 9 Empires drops on Stadia February 15. Test your might against insurmountable odds in a one-versus–one thousand melee while conjuring up a battle plan in a country-conquering simulation.

You’ll have the chance to build alliances and navigate the nuances of backroom (and backstabbing) politics to ensure your force fights as one. With options to play as rulers, officers, or freelancing mercenaries, you’ll experience exciting battles where wisdom and courage intersect in castle sieges.

Forget guns and ammo – your team is your greatest weapon in Rainbow 6 Extraction! You and your squad can combat both your nerves and an emerging alien threat in this tactical co-op shooter.

With nothing to lose during this try-before-you-buy period, the only thing stopping you from giving this game a go is your own fear.

Get ready for five (yes, five!) new games including the hit threequel Quiplash 3 and the collaboratively chaotic The Devils and the Details.

Feed your NFL postseason obsession in Madden NFL 22 with Play to LA. Check out Super Bowl LVI content in Ultimate Team that celebrates the past, present, and future of the big game, then watch this official prediction video featuring Marshawn Lynch!

The Elder Scrolls Online’s upcoming chapter has just been announced, and High Isle is now available for pre-purchase. Traverse majestic cliffs, stunning castles, and lively tournament fields as you explore the noble home of the Breton elite, a new location never before seen in an Elder Scrolls game!

Part of the Legacy of the Bretons yearlong adventure, in High Isle, you must fight to defend the honor of this chivalric culture against the mysterious forces of the Ascendant Lord as he seeks to plunge all of Tamriel into chaos. High Isle also introduces a brand-new way to play with Tales of Tribute, a competitive card game.

Pre-purchase now and you’ll get immediate access to the Palefrost Elk mount and Palefrost Elk Fawn pet* in addition to a host of additional rewards at launch. Better yet, if you pre-purchase The Elder Scrolls Online Collection: High Isle, you’ll gain instant access to the ESO base game and all previous Chapters.

*Available with pre-purchases now through April 4, 2022.

WAS JOSEPH RIGHT? Step into the mind of Joseph Seed from Far Cry 5, playable in co-op, and battle your inner demons. Explore a twisted version of Hope County, fight your former followers and confront your family members; available now!

Destiny 2 ViDoc: Light in the Darkness

Join the Bungie developers as they discuss Savathun, The Witch Queen, Season of the Risen, and Void Subclass updates, weapon crafting and more.

See you on Stadia!