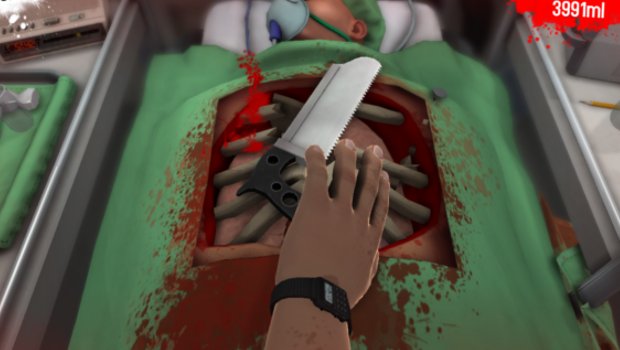 Have you ever wanted to experience what it’s like to be a surgeon? It’s one of the more fascinating jobs out there, really – slicing open another human being’s body and, with the care and precision that can come only from thousands of hours of practice, performing delicate works of life-saving grace on a person whose well-being is entirely at your mercy. It’s as solid a premise for a game as anyone could hope for… but still, it’s missing something, isn’t it? It needs some character, some twist. Instead, how about you experience what it’s like to be a surgeon who can only use his left hand, clearly has no real medical training, has finger-dexterity of a three-toed sloth who’s been slamming vodka and Red Bull, and whose first ever surgical task is a heart transplant? If that sounds terrible to you, well, it’s all downhill from here. But if that sounds strangely compelling, then good news – Surgeon Simulator 2013 may be the title you’ve been waiting for.

I have to admit, I was caught flat-footed with this title. Surgeon Simulator 2013 is so dry of a game title that I automatically assumed it was meant to be somewhat serious – even the screenshots, taken on their own, look just realistic enough at a glance. That illusion shatters quickly. In fact, you don’t even have to start a level to realize that you’re dealing with a title whose approach to surgery is pretty tongue-in-cheek: you’re given the whole ‘control this awkward left hand’ aspect of the game right at the starting menu screen. Right beside your hand is an old-school Apple IIe style monitor giving cursory instructions on how to control your hand-avatar – move the mouse to move your arm, press the right button to move your wrist, left button to lower your hand, and the A W E R and space keys to grasp with each individual finger or the thumb. Sounds easy, right?

Wait a second – no it doesn’t.

[singlepic id=12085 w=320 h=240 float= left]It’s awkward. Hilariously awkward, in the best sense of the term. Really, the developers at Bossa Studios originally developed the prototype for this game during a 48 hour Global Game Jam – and apparently the whole point was to make the whole affair as much of a clumsy, struggling affair as possible, on purpose. Chances are you’re going to make a complete and utter mess of the desk that functions as your opening menu / initial experience with the Surgeon Simulator 2013’s controls, and it’s probably going to be a fun affair. You’ll try to grab the receiver of the phone that’s ringing, and chances are you’ll screw up and knock the whole thing off your desk entirely. Maybe you’ll pick up one of the pens and try to draw on the nearby notepad – and you’ll probably fail at that too. Eventually you’ll decide, okay, enough of that, let’s try an actual level in this game… and that’s when you’re going to find that the very first mission on your surgical quest is a full-blown heart transplant. No long, detailed tutorial, no pulling a splinter out of someone’s thumb as an initial learning experience. Welcome to Surgeon Simulator 2013, you’re a drunk one-handed klutz – now smash open a ribcage!

[singlepic id=12087 w=320 h=240 float= right]I do mean smash open, by the way. On top of the awkward controls, this game makes sure to throw a variety of clearly non-medical toys into the mix for you to experiment with – and while I’m sure a hammer or a drill may have some legitimate uses in a surgical context, shattering ribs into a pile of indiscriminate bone probably isn’t the result of proper medical procedure. Thankfully, the game’s pretty forgiving of all this – have fun with it. Really, the guy on the operating table likely isn’t going to survive your first foray into the world of surgical fantasy. You’ll realize that the moment you’re trying to rip your patient-victim’s lungs out of the way of his heart, only to notice your watch loosen and fall from your wrist, ending up hiding beside his liver. Just leave it in there if that happens, by the way. Time is of the essence, and the game doesn’t dock you any points for dropping watches, scalpels, bottles of water or anything else into that bloody organ-pit.

[singlepic id=12089 w=320 h=240 float= left]There are a few levels to the game – you’ll swap hearts, kidneys, even a brain, and you’ll do so with some time constraints. But really, Surgeon Simulator 2013 is a little like Scribblenauts in that it feels less like a game, and more like a toy or gadget. You can have at least a half hour of fun poking around at the level selection stage alone, and the bulk of the game’ 48 achievements are devoted to doing neat or silly things rather than being particularly skillful at completing the actual objectives laid out for you. After a while, I managed to complete the open heart surgery level and graduated to a dual kidney operation, so I’ve played enough to admit that there really is enough ‘game’ here for Surgeon Simulator 2013 to be worthy of being called one. Still, you’re not going to appreciate the title unless you enjoy the more gadgety aspect of what’s being offered, or chasing after silly achievements like electrocuting and drugging yourself at the same time. If all you care about is finishing the levels, you can expect to be frustrated. Then again, maybe that frustration will make your eventual success all the more glorious.

With a current price of $9.99 on Steam, Surgeon Simulator 2013 is coming out of the gates rather reasonably priced for what it is. I didn’t encounter any crashes or bugs, or indeed any form of frustration that wasn’t clearly built into the game intentionally to begin with – if anything, the whole thing feels remarkably polished, more than many major releases. Still, it’s a game that’s going to appeal far more to people who have a macabre sense of humor or who just plain enjoy ‘toy’ style games. If taking a hammer, a power drill and a saw to someone’s internal organs (and doing so with all the grace of a drunk, sleep-deprived orangutan) sounds appealing to you, pick this one up – or at least throw it on your Steam wishlist and wait for the inevitable deep discount.