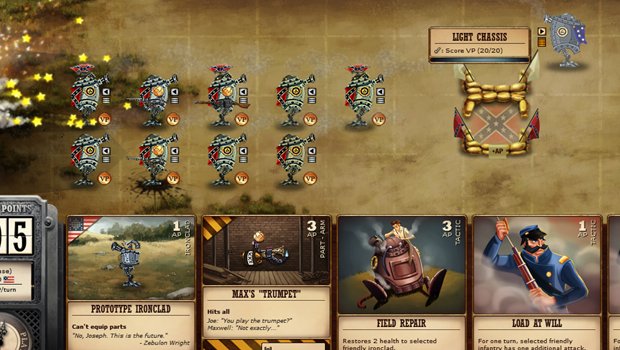 Ironclad Tactics is the latest game by Zachtronics, best known for quasi-science indie puzzler SpaceChem. Combining collectible card based deck management and realtime tactical challenge with a story set in an alternate history of the civil war where steam-powered mechs joined soldiers on the battlefield, it’s easily one of the most unique titles to come out this year. The result is a fun little game that carves out an odd niche somewhere between Plants vs Zombies and a scaled down Magic: the Gathering, loaded with unlockables and even multiplayer options while being paired with an unfortunately flat storyline. But at $14.99 it’s worth a shot for anyone looking for a truly original tactical puzzler with a refreshingly original theme.

Ironclad Tactics takes place during the outbreak of the American Civil War, but with an alternate history spin involving bulky, cartoony mechs taking their place on the battlefield alongside the soldiers. The game initially deals with the tale of two engineering brothers working under the tutelage of the inventor of the mechs (the titular ironclads), but the story is easily the weakest part of the title – a mix of an interesting premise, well-drawn graphic novel style storytelling, all undone by utterly terrible pacing. Neither the characters nor the situations they’re in are given nearly enough time and attention to develop, making it feel almost as if a cliff notes version of the story is being told rather than the real deal. This doesn’t impact the gameplay of Ironclad Tactics – and at the end of the day, that’s what really matters – but given how well-designed the game itself is, and how unique the premise is, it’s really a shame that the story fares as poorly as it does.[singlepic id=16406 w=320 h=240 float=right]

Luckily, the actual meat of the title has much more going for it. Ironclad Tactics plays almost like a Plants vs Zombies game, but with both sides playing as the zombies. You assemble a deck of 20 cards – a mix of ironclads, human soldiers and assorted upgrades or tactical maneuvers. Each of these cards has an action point cost associated with them in order to place them on the field, or (in the case of upgrades and tactics) apply them to relevant cards already deployed. The ironclads themselves will have one or more ‘points’ attached to them – and if you manage to get your ironclad from your side of the screen to the enemy’s side, those points will be added to your total. Reach the required point total before your enemy does, and you win the game. The aforementioned action points are automatically accrued on a per-turn basis. This is a realtime game – there’s no pausing and waiting for either your or the enemy’s turn to complete, which likewise means there’s precious little time to think over your tactical moves. Adding to the pressure is the constant cycling of your hand – you can only have a maximum of 5 cards to choose from at any point, with the ‘oldest’ card you’ve drawn being discarded if a new card is added while your hand is full.[singlepic id=16409 w=320 h=240 float=left]

There are some additional gameplay modes Ironclad Tactics offers up – puzzle-based challenges, or tactically advantageous locations on the map (such as a mortar that can be operated by select units, granting you victory points every two turns it’s held – or locations that will add to how quickly you accrue points to spend on cards as long as you hold them) but victory point accrual is the heart of the game. It’s a very nice system, one that manages to be original while at the same time feeling as if the whole design has been given a considerable amount of thought and tweaking – balancing the pre-game planning aspects of deck building while at the same time making the gameplay feel faster and more high-pressure than a normal card game would be. It’s very easy to ‘miss’ when trying to get creative with tried-and-true formulas like these, and Zachtronics is to be commended for pulling off a novel entry into the genre.

Despite the collectible card nature of the game, there are no booster packs to buy, and certainly no cash shop purchasing of cards. Instead, cards are acquired by in-game unlocks – whether by playing through the story campaign’s stages, completing special per-stage challenges, engaging in multiplayer, or successfully completing per-card upgrade conditions (such as ‘defeat 20 enemies using this card’). It’s nice to play a fun collectible card game without being roped into the wallet-draining hook of booster packs and other such typical antics – and the variety of cards available in Ironclad Tactics, as well as the diversity of challenges through which they’re unlocked, is considerable. There’s a whole lot of content to run through, and the inclusion of multiplayer modes only extends that further. It also seems as if Zachtronics has some long-term plans for this title, and it’s always a pleasure to see a dev team dedicated to supporting its game even after release.[singlepic id=16411 w=320 h=240 float=right]

At $14.99 on Steam, Ironclad Tactics is definitely worth a look for any lover of collectible card style games who’s looking for a fresh system to master. While the awkwardness of the campaign mode’s storyline is unfortunate, the game more than justifies its cost in terms of inventive mechanics, a refreshing setting and a well-thought-out realtime tactical system – all without the looming threat of microtransactions and booster-pack expenditures that so often are matched up with any card-based game.