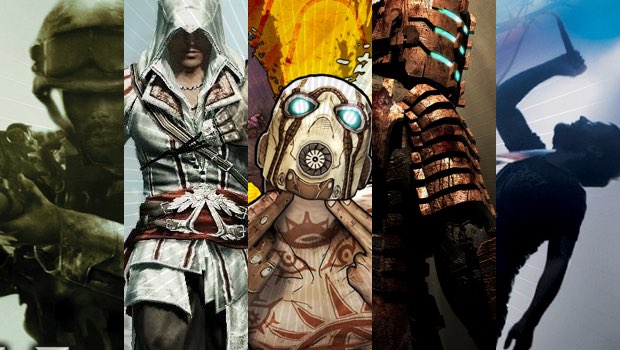 Missed games 25-21?  Click here to catch up and don’t forget to check back each day this week as we continue to reveal the top games of last generation!

With Resident Evil beginning to veer towards a more action-oriented experience after RE4, it left a void in the survival horror genre.  Not only did Dead Space manage to pick up where Resident Evil left off when it lurked onto the scene, it created one hell of an exhilarating experience while also still managing to stay frightening.

Perhaps what is most engrossing about Isaac Clarke’s rescue mission aboard the USG Ishimura is just how atmospheric the game is.  There may have been a small handful of human survivors still aboard the ship that Isaac interacts with, but the majority of the game is spent guardedly wandering the ruined hallways of the ship with only the terrifying sounds of the ship’s clattering metal interrupting the unsettling silence.  And what better way to set the mood than with the game’s lack of a HUD, with all relevant information, like health and ammo, cleanly displayed in-game on Isaac’s own engineering rig.

Dead Space 2 and 3 were enjoyable in their own right, but seemed to lack the focus and emphasis on fright that the original did, making it the sole horror game on our list.  When it comes to story, scares and presentation, Dead Space had it in spades. – Matt Welsh, Editor

Bigger, badder and more badass than its predecessor, Borderlands 2 improved upon everything that made the first game so great.  The gunplay was excellent, 4-player co-op worked wonderfully, classes all felt varied (yet equally powerful), and the loot system was jammed full of the game’s 87 gajillion guns.  Perhaps even more addicting was how every little action earned some type of reward, be it XP, guns or badass rank, so it always felt like your time was never wasted.

Much like the original, Borderlands 2 also featured an enjoyable story filled with memorable characters, each of which was even more hilarious than the last.  Tiny Tina, Ellie, Torgue, and Butt Stallion are just a few of the colorful residents that you’ll encounter as you trek across Pandora.  Perhaps most importantly, Borderlands 2 also introduced us to Handsome Jack who instantly became one of gaming’s most epic and beloved villains.

As far as sequels go, Borderlands 2 hit all the right notes and then some.  Whether you enjoyed the action, story, humor or customization, there’s enough excellent content to keep you “joy puking your face off” for a long time. – Matt Welsh, Editor

If you weren’t exactly impressed with the first Assassins Creed game, I wouldn’t blame you. It wasn’t a particularly great game. It had a one-note protagonist and it got extremely stale and repetitive very quickly despite the potential for an intriguing story. Then came Assassin’s Creed 2, and that game showed just how sequels are supposed to be made.

No more one-note protagonist, instead you have a deep and constantly developing main character to invest yourself in. No more boring, repetitive mission design, there’s a much greater variety of objectives. Assassin’s Creed 2 did everything a sequel is supposed to do: it took the potential of its predecessor and perfected it. There’s not much else you can hope for, and it’s one of the best examples of why you should give a series with potential a second shot at bat. – Niko DelValle, Editor

Guitar Hero may have been the proof of concept for rockin’ rhythm games in the PS2 era, but Rock Band is the innovation that made the genre a staple for living rooms and parties everywhere. A vast DLC library and healthy mix of drums, guitar and karaoke vocals kept the formula fresh, but it was the community aspect that makes Rock Band so memorable.

The feeling of actually jamming out to a song with friends, playing out rock fantasies in the comfort of your own home, is an experience no other game has managed. Even if you were a solo player, there were leaderboards for every song and difficulty, and tons of weekly challenges to surmount. Plus, we all remember where we were when we conquered the Endless Setlist. – Eric Van Allen, Editor

The progenitor of so many modern military shooters after it, Call of Duty: Modern Warfare quite literally modernized the first-person console shooter landscape. Stuck in the beaches of WWII, Modern Warfare took the excellent shooting from previous games and put a modern twist to it, creating a memorable experience that, some will argue, still has yet to be toppled to this day.

A single-player campaign with so many standout missions: All Ghillied Up, Heat, Crew Expendable, No Fighting in the War Room, Endgame. A brilliant multiplayer that kicked off the craze of progression systems, that managed to stay fresh and exciting across a variety of modes. Ingenious map design. Gorgeous graphics. Modern Warfare, to this day, is still one of the best modern-era shooters ever made. – Eric Van Allen, Editor