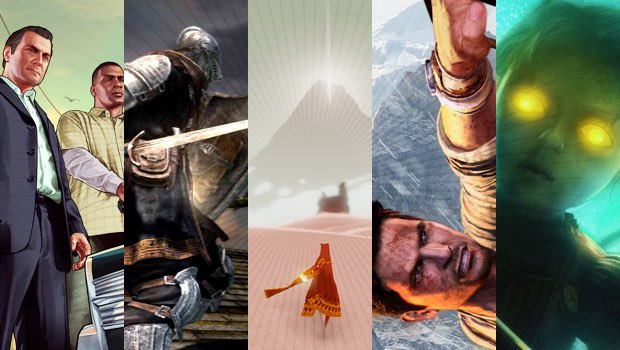 Uncharted 2: Among Thieves was the game that made Nathan Drake more than a C-list celebrity in the games industry.

Where Uncharted: Drake’s Fortune was a good proof of concept, Among Thieves turned Uncharted into more than just a serviceable action-adventure game, and into the industry’s own  blockbuster action film with its incredible interactive set pieces. What other series lets you climb up a train that’s falling off the side of a mountain, or take part in a firefight that collapses an entire building while you’re inside it? Many games would have these events take place in a cutscene, but Naughty Dog puts Nate and the player in the heart of all of its action.

Uncharted is the movie-turned-game the medium has always wanted, and Uncharted 2 establishes what it means to take on such a heavy role in the industry, and paved the way for the incredible follow-ups that came after. – Kenneth Shepard, Lead News Editor

You may have heard this a million times already but it’s worth repeating. Journey is more than just a game, it’s an experience. As I sit here and try to come up with words to describe the game, I get lost in thought. How do you put into words the feeling you get when you get through this extremely short game (two hours at most) and sit there as you try to wrap your mind around what this journey was really all about and what exactly did it mean? It manages to convey a sense of mystery without coming off as pretentious.

Journey crosses that fine line between game and art. Thatgamecompany had already made their mark in the industry by coming up with extremely original and experimental indie titles like Flow and Flower, but nothing quite like this. The moment you run into another wandering player who you may end up sharing this experience with until the end of the game, without even knowing who they are or where they’re from is the moment you start to understand that this game is something special. Every gamer will have a different experience when playing through Journey and every gamer will have a unique perspective on the meaning the game had for them. Can games be considered art? Journey answers that questions with a resounding yes. It’s hard to explain why. You’ll just have to play it yourself. – Paul Cesar, Features Writer

Grand Theft Auto games never disappoint. GTA V is the culmination of every open world game that came before it and one of the most massive and detailed playgrounds in video game history; it’s bigger, better and more ambitious than any other GTA game to date. The unique attention to detail, that comedic satire on modern society; it’s all there as you would expect a GTA to have but GTA V gave us so much more. There is another open world game on this list that we ranked higher, but if you want a true representation of the “sandbox” genre that GTA itself made relevant, this game easily takes the throne.

GTA V wasn’t limited by hardware limitations like in San Andreas or by the serious and more realist approach to the world that GTA IV had. Having 3 main protagonists for the first time opened up a world of possibilities when it came to storytelling and the newly introduced heist missions were just the icing on top of the cake. Judging by the amount of quality on our list, this last generation was one that we’ll remember for years to come and GTA V came in at just the right moment to become its swan song. – Paul Cesar, Features Writer

So many games mold themselves to fit the player. Play it your way, no way is the wrong way, here’s a checkpoint and a marker telling you where to go next, here’s a cutscene to tell you the plot and move along please… Dark Souls takes the opposite approach. In Souls games, you are given a general objective and then told “go.”

The lore and atmosphere of Dark Souls are engrossing. The combat is punishing but rewarding. Each fight feels like a deadly tango, and only one dancer walks away. The enemies, bosses, even the world is trying to stop you – and overcoming all of it is incredibly satisfying. There’s a story to be found, yes, but even the NPCs tell their own tale; stories of abandonment, loss, despair and then hope, even in the darkest of caverns. Souls is a single concept brought to its fullest peak, and one of the best designed games ever made. Difficulty shouldn’t ward you off from playing this masterpiece. Just prepare to die. – Eric Van Allen, Editor

Bioshock fundamentally changed games for me. It was dark, intense, and is arguably the game to have started the postmodernist era that we’re now all enjoying as gamers. It caused me to think about why characters blindly do what they are told in video games, and fundamentally altered the way I thought of video games.

As if all of that wasn’t ambitious enough, Bioshock is also one of the greatest cautionary tales of Randian-style Objectivism that exists in any form of media. What would a truly anarcho-capitalist society look like? What are the potential pitfalls of a completely laissez-faire capitalist community? To this day, no game has come close to tackling subjects as complex and meaningful as the ones that Bioshock took on in the early days of the previous console generation’s lifecycle. – Travis Northup, Staff Writer