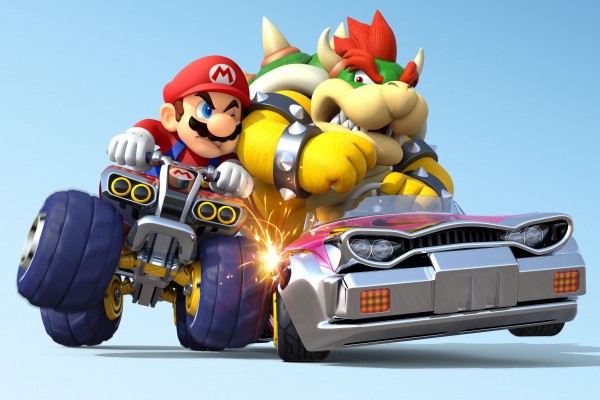 2014 was a year of transition for the gaming industry. The new consoles all stumbled to gain their stride and there were more than a few disappointments along the way. Looking back, some of the best games I played this year were just updated versions of last year’s games. With remakes of blockbusters like Grand Theft Auto V and The Last of Us clogging the systems, it was sometimes hard to find the genuine 2014 games that left a lasting impression on me. It wasn’t my favorite year in gaming, by any means, but it still had it’s moments and there’s always next year.

This was my favorite car simulator to come out this year. It only got better with the latest patch that updated the levels with realistic weather effects such as rain and snowfall. The physics feel weighted and polished and the way it tracks your worldwide ranking for nearly every corner you take makes every second feel like a new challenge. It also looks amazing, so anyone interesting in showing off the graphics of their brand new PS4 couldn’t go wrong with this title.

This game plays like I’ve always dreamed side scrollers would play. It’s fast, intense and it makes you feel like a complete badass ninja as you speed through your enemies slicing through them like butter. It’s a non-stop adrenaline rush so be careful you don’t end up playing this for eight hours on a Saturday, just make sure to take plenty of breaks for food and water and you should be fine.

I play a lot of videogames, it’s true, so any game that I can also play with my girlfriend has got my vote. L.B.P. has been a favorite of mine since the first game introduced its concept of building, sharing, and playing user generated content. This latest itineration enhances the graphics, introduces new characters and items while also maintaining the same charm that the series is known for.

I had no idea what I was getting into, and to be completely honest, even after beating this game, I still don’t know what I got into. P.T. is a creepy mystery that employs some of the most creative and original gaming tecniques that I’ve ever seen. I would have never have figured out the solution if it wasn’t for youtube, but the experience of playing this thing to the end is well worth the research. And best of all is the whole thing is free. I didn’t think I could be scared by a videogame anymore, but then I played P.T

If you’re a fan of the first L.O.S. then this should be a no brainer for you. Not only does this continue the storyline from the original, but it also recaptures the darkened tone and atmosphere that made the first game so exceptional. The new camera control system makes this the kind of game that you can explore for countless hours.

I got this game after already having played the original release on the PC and I still consider this a new game. It’s amazing how well the gameplay translates to a controller, making this play more like Action RPG titles such as Baulder’s Gate or Champions of Norath.

I’ve been playing the Infamous series since day one, but this is the first time I’ve felt like an overpowered demigod. Being able to select between multiple power types such as speedster or flyer, rather than just being stuck with the electricity powers from the first two games, makes this the most exciting addition to the series. Not to mention the graphics are some of the most impressive on the PS4 to date.

The first time I hit Wario with a red turtle shell, I knew I was hooked. He spun wildly around screaming in the air and waving his fists over his head in a fully animated sequence that made me feel like I was watching a high rez cartoon. This game is so much fun that it makes me forget it’s about racing go-karts and throwing banana peels. Just like Smash Bros. this is a crowd pleaser game that shines brightest with a group of friends.

If I were basing my top ten list on gameplay hours alone, then Destiny would be my top pick hands down. But a good game needs to be more than simply addictive. Fortunately, Destiny’s gameplay is also great fun. The weapons are creative, the balance in the PVP is solid, and the multiplayer interface is seamless. For a good time, get six friends together and hit one of the weekly raid events. Just try your best not to get addicted.

At its core it’s a very simple fighting game, two buttons for attack with different moves based on how you press the directional pad. It’s easy to pick up but difficult to master. The variety is the real reason this game is so much fun. The levels have a mind of their own, each of the 50+ characters is unique and special, and there’s no telling what will happen when you have eight fighters jammed together on the same screen. This game represents the reason I got into videogames in the first place, shouting at the TV with a group of friends and having a blast.