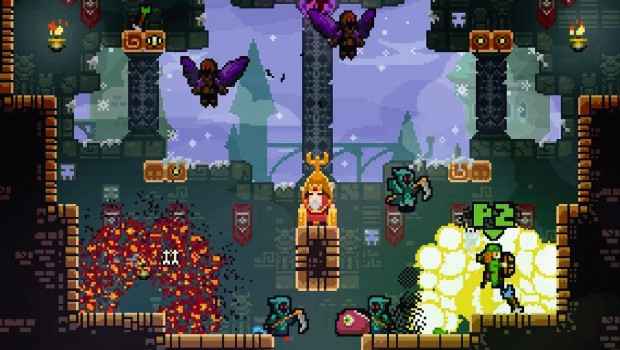 2014 was a strange year for video games.  The first year of a new console release puts a lot of pressure on big developers, and many of them, most criminally Ubisoft, haven’t delivered.

Luckily this year a lot of smaller studios and indie devs picked up the slack and made me feel happy about my rather large investment in a PS4 so early on.

I’ve always loved watching what independent developers can craft with video games, which my list heavily reflects.  So here they are, my top 10 games of 2014.

I’m a sucker for stealth games that allow any approach imaginable, which is exemplified by the Metal Gear Solid series. Metal Gear Solid V: Ground Zeroes was an absolute dream to me offering dozens of different approaches to the same island.

Camp Omega is a densely packed playground of the best that Metal Gear Solid has to offer. It gives you new approaches to stealth, such as driving covered vehicles right past enemies, that transcend the typical “crawl slowly through a bush” style gameplay of the series’ predecessors. Ground Zeroes ushers in a new era of Metal Gear Solid games.

Metal Gear Solid V: Ground Zeroes is a master class in action stealth games that didn’t just get me excited about MGS V: The Phantom Pain, it took me for an absolute ride.

“Oh my god, jump, run, jump, poke poke!” I shouted that at my computer while my friends and I shared one keyboard between two players, and Nidhogg was to blame.

There are so few working pieces to Nidhogg, but they can all be used in such awesome and variable ways. All you need to do is get to the opposite side of the screen, but there’s an enemy armed with an epee who wants the same thing.

It’s the little touches that makes Nidhogg rise above the rest of the pack of “easy to play, difficult to master” games that came out this year. Players can get rid of their sword in order to run faster, and there’s nothing better than being unarmed and overtaking an armed opponent with nothing but a well-timed roll. Every piece of Nidhogg is so meticulously polished, and that earns it a spot on my top 10 list.

8. Tales from the Borderlands

I first heard about Tales from the Borderlands at E3 this year, and it really surprised me. I had to get into that preview, because I was just so curious how Telltale’s tone was going to mesh with the absurd world presented by Borderlands.

I fell in love with it immediately. The main characters were instantly likeable and identifiable. I am a sucker for fish out of water scenarios, and throwing a corporate lacky like Rhys onto Pandora and watching him squirm was so satisfying.

Tales from the Borderlands took me to sides of the Borderlands universe I didn’t know it had. The natural flow of the story from one location to the next, peppered with high octane moments, made for a fresh and exciting experience.

7. The Binding of Isaac: Rebirth

Punishing difficulty plus procedurally generated levels made me say, “Just one more try, I’ll get lucky this time,” over and over while I burned the midnight oil trying to destroy Mom, unlock all of the characters, and conquer the challenges presented by The Binding of Isaac: Rebirth. There was no way I was turning my console off until I reached that climactic ending.

Hardcore games are coming out more and more every year, but Shovel Knight is the most true-to-form hardcore game to come out in 2014. Simple mechanics lend themselves to some of the most intuitive yet challenging gameplay in this sidescroller.

Shovel Knight stinks of homage to the NES classic, but doesn’t go so far as to even wink about its influences. Never reducing itself to a quirky nostalgia trip, it just feels like an insanely polished NES title that stands on the shoulders of Mega Man and Ducktales that came before it. Intricately designed sprites, music that takes you right back to the glory days of the NES, and absurdly well designed levels all scratch the nostalgia itch.

Where did this game come from? I first heard about Middle Earth: Shadow of Mordor at E3, and it looked interesting, but its goals were a bit lofty. I didn’t know if it could pull it off.

But it delivered in spades. Punching every imaginable combination of face buttons to pull off awesome combos, stringing them from orc to orc, was so intense.

When you die in Shadow of Mordor, you don’t lose a life or return to a previous checkpoint. You get to see the orc who killed you rise through the ranks in the game’s innovative nemesis system. The game doesn’t rely on setting the player back for death; it just tells them that there are consequences for their actions, and that they should be ashamed.

I was extremely skeptical of Hearthstone: Heroes of Warcraft when I first heard the idea. A mystical realm filled trolls, demons, and orcs and we’re going to focus on a card game

Then I played my first game and I was hooked. Every aspect of the game, from placing down your initial card, all the way to losing (which I do a lot of) is just so visceral. The rules are simple enough to explain to anyone in about 15 minutes, but lend themselves to stunning combinations of cards that can devastate opponents.

Winning in Hearthstone is satisfying in ways unlike any other card game. Of course, if you ever beat me, it was just luck.

3. The Wolf Among Us

I was a bit worried about playing through The Wolf Among Us. I had never read any of the comics and was worried I would get lost trying to understand the lore of the fantasy world. Even so, I trusted Telltale Games and the plethora of good press the game was getting and dove straight in, and I have to say that I did get lost.

The game’s world was so immersive that I was able to beat the entire season in just two sittings, devouring the story’s twists and turns and finding myself caring for every character. Just when I thought I had a fact to hold onto, the narrative stole it away from me, and I loved it. Well-acted characters accompanied the intricate story and dragged me deep into the Fables world. Season 2 can’t come soon enough.

2. Super Smash Bros. for Wii U

Smash Bros. Wii U is the game that made me buy a Wii U. On Black Friday, I got a great itch while chomping on a salad at Moe’s. The great itch to play the Wii U, more specifically Super Smash Bros. That evening, I was mashing buttons and unlocking characters until the pads of my thumbs were raw, and I loved it.

Super Smash Bros. Brawl was more of a party game, introducing mechanics, like tripping (ugh), that would put pros and entry level players on somewhat more even footing.

Smash Bros. Wii U manages appease my casual side with insane 8-player battles and the fun boardgame-like Smash Tour and my hardcore side with intense Omega levels and high levels of character balancing.

I got Towerfall: Ascension through Playstation Plus earlier this year, and the first time I booted it up, I wasn’t very impressed. Sure, it was fun, but for some reason it just wasn’t grabbing me — until my roommate decided to join me in the fray.

After that we were hooked, working towards beating every stage on hardcore difficulty every day after we got off work. After about a month we had attained our goal, so we turned to the VS mode, which can get serious quickly when you add in friendly wagering and adult beverages.

All of the game’s mechanics are so deliberately designed. Jumping, shooting, and dashing all feel so natural that when an opponent scores a kill on you, you know that the only person to blame is yourself. I had more fun tensely gripping my controller over Towerfall: Ascension than I did playing any game this year, hands down.