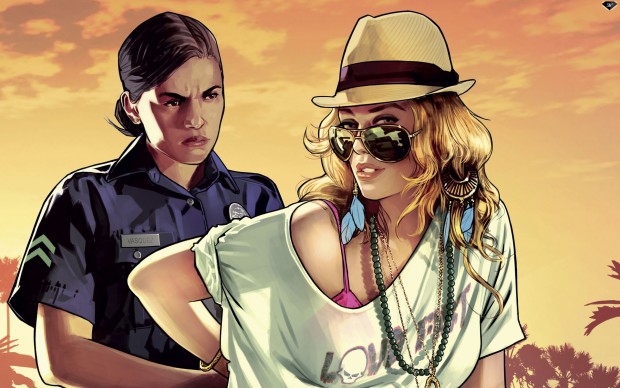 It’s fun being the boss.  I get to make the rules, and then I get to break them.  Why?  Refer to the beginning of this paragraph.  See?  Awesome.

Being frank, 2014 was the year of broken games.  We saw unstable, buggy, and incomplete games pushed into the hands of the unsuspecting public.  But we also saw amazing games, too.  Games that bent the rules, pushed back against genres that have laid dormant for a long time, and even one that asked us what it means to be human.  Without further ado,  it’s time for my Top 12.

12. South Park: The Stick of Truth

From the opening moments of picking your character, all the way through the bizarre conclusion, this game is a 100% perfect representation of the show.  Loyalty to the source material, the voice actors from the show, and a well-built script come together to create a game that would make a TV censor twitch.  The JRPG-style combat has you summoning the guy from City Wok and Matrix-Jesus, and using Jew-jitsu as Cartman slings his usual insults.  If you are a fan of the show, you should pick this up.  Check out our review, mmkay?

When I saw this game at E3 2013 I didn’t give it a whole lot of thought.  The section shown in the demo was impressive graphically, but it didn’t set the world on fire.  When the game showed up for review, my expectations were for a standard shooter like its predecessors.  What I found was something emotionally engaging and surprisingly human.  BJ was no longer the dull instrument of war, and the Nazis were more than one-note villains.  There was even an alternate timeline story to explore.  Machine Games really outdid themselves, and it paves the way for real excitement for a sequel.  Our review tells the whole story, but this game is far more than I expected when judged against its predecessors.

If you take a look at my reviews, you’ll note that racers aren’t often on my to-do list.  I went to an event to check out Sunset Overdrive, but they also had Forza Horizon 2 to check out.  I knew immediately that this was a game I had to play.  Part arcade, part racer, and filled with the world’s best supercars, Forza Horizon 2 had more variety in its first hour than most racers have under their entire hood.  My own review felt like a love letter, and I declared it the best racer I’d played in the last decade.

The brilliant yellow color makes it go much, much faster.

While we did disqualify all remakes and updates from our site top ten, we were all happy to give them their due in our personal lists.  Grand Theft Auto V was near perfect when I reviewed it, and David agreed with his review on PlayStation 4.  When a game is already this amazing, what do you add to it other than higher-resolution graphics?  How about all new vehicles, an expanded soundtrack, multiplayer for up to 30 people, double the draw distance, a first person mode, as well as swipe controls, visual chase indicators, and police chatter on the DualShock controller for PS4.  Rockstar pulled out all the stops on this one, and it stands out as one of the best games on any platform.

Wait…what?  But I thought space titles were dead!  It turns out that, as PCs move into the next generation of graphical improvements alongside their console counterparts, the space sim is poised to make its triumphant return.  Being able to procedurally generate entire universes and turning players loose in cockpits of spacecraft to traverse those worlds is just the start.  Add in things like Oculus Rift support and you build something truly special.  Elite: Dangerous takes on a journey that will keep us floating in the vast sea of blackness for a very long time.  Niko turned in a great in-depth review, so don’t just take my word on it.

If we are measuring our Game of the Year candidates on pure playtime, Rocksmith 2014 would be #1 on my list.  It has fed a new addiction, leading to me owning four guitars (as of this writing), and spending a great deal more time listening to music differently than I ever had before.  Rocksmith has made me, a lifelong musician, appreciate music differently — another fine example of games transcending the norm.  The team at Ubisoft San Francisco continues to bring amazing music to my home, the most recent being Jimi Hendrix.  I turned in a novice review when the game first launched (Matt Buckley gave us the perspective of a seasoned guitar player), and I turned in a hilarious (in my humble opinion) video review for the Xbox One upgrade from 2014.  Enjoy, and give my regards to the RIAA.

The moment just before you are actually hooked.

There really isn’t a “mascot” for the Xbox One yet, but Fizzy from Sunset Overdrive does a great job until Master Chief gets back on top.  Sunset Overdrive brings hilarious fourth-wall breaking awesomeness, combined with some of the best aspects of games like Jet Grind Radio, Saints Row IV, and Tony Hawk, to create a game that is uniquely Insomniac.  Hardcore LARPing, a few showtunes, over-the-top weapons, and missions like exterminating 500 pigeons with a makeshift BBQ are just a few of the reasons why you absolutely must own this Xbox One exclusive.   Check out our video review for the candy colored chaos.

The best horror movies ever made are the ones that use tension instead of jump-scares.  The original Alien movie was masterful as it kept the tension high but you didn’t see the titular creature until more than halfway through.  Alien: Isolation nails that same vibe.  The first time you see the beast it isn’t with a jump-out scare moment, but more of a “oh, by the way – and you are now being hunted” sort of thud.  It is a perfect introduction for the monster as it feels organic and never forced.  The game proceeds this way throughout, the beast stalking your every move without the developers artificially staging monster closets.  The set pieces are incredible, and the sound is mind-blowing, but the graphics here create shadows that will bend your brain.  You’ll see creatures around every corner, you’ll see shadows that make you back away, and all the while the monster is right behind you….maybe.  Other than hilariously slamming every hiding spot as hard as possible, the game makes stealth and evasion into something amazing — an incredible redemption on the previous efforts from Sega and their chosen developers.  You can read my full review on it here.

In space no one can hear how loud your hiding places are. *SLAM*

Ubisoft makes amazing AAA games, but they also occasionally step away from the mountains of money and long development cycles to make something amazing.  Rocksmith 2014 is one example of that, and Child of Light is another.  Built on the UbiArt Framework engine, Child of Light looks like a painting come to life.  As Travis said in his review, it only takes a few moments with the game to ensnare you and leave you hooked.  The game is a 2D platformer, but it mixes nicely with an Active Time Battle combat engine to create some compelling gameplay.  Throw in a fresh take on multiplayer and a new twist on our favorite fairy tales and you can see how such a small title can burn so very, very bright.

An incredible game with a strong female lead

You might be surprised to see Diablo III on my Top 10 list, but with the amount of time my wife and I have put into this game on the Xbox 360 (review), and again on the PlayStation 4 (review), it absolutely deserves a spot.  Blizzard has refined the formula, rebuilt the controls, and added a deluge of new content to Diablo III to create something entirely different than its PC counterpart.  The new class is amazingly well balanced against the existing ones, and multiplayer on the couch remains the best way to defeat the dark lord of terror.

I had this entire list written before I discovered The Talos Principle.  Reading David’s review, it was clear that I couldn’t declare a Top 10 without experiencing this game.  Croteam, the folks that brought you Serious Sam and its sequels, have delivered an entirely new puzzle game that not only looks absolutely amazing, it makes the player question their assumptions about what it means to even be human.  When AI becomes sentient, what separates us from them?  Should they have rights?  When they begin to think and reason, should we continue to dispose of them as mere things?  This game came out of nowhere for us, and a great many sites may miss it due to just how late in the year it was released, but make sure you don’t — this game is absolutely amazing.  Whether it’s today on the PC, or in 2015 when it releases on PlayStation 4 and Android platforms, I simply cannot recommend it highly enough.

Play this game. Discover and then question what it is to be human.

The team at Bioware took an incredible risk with one of their biggest franchises.  Eschewing the linear storytelling worlds and their internal engines, they instead created an entirely open world using the same engine as Battlefield 4.  This was a massive learning curve, a major adjustment in the way the main story and the incredible wealth of side missions would unfold.  While some parts of the game do feel a little checklist driven, every other part of the game feels incredible and hand-crafted.  The storytelling is masterful, the characters are the best they’ve ever been, and the decisions you make have a meaningful impact.  I put together a spoiler-free video and written review, as well as a quick platform comparison and three rounds of multiplayer on this title.  Once I completed it, I immediately restarted with a new character to make sure I consumed every single bit of content this game had to offer.  Bioware has raised the bar once again, and I cannot wait to see where they go next.