When you travel for work as much as I do, you develop a streamlined routine. For me, that includes one carry-on suitcase, a window seat, and a simulation or tycoon game, especially when long-haul flights are involved. During just such a flight from Los Angeles to New York, I found myself curled against an airplane window, Switch in hand, ready to invest a solid six hours into what turned out to be one of the most charming tycoon games I’ve come across: Megaquarium.

We at Gaming Trend first fell in love with Megaquarium in October of last year, when Ron gave the PC release an 85 and left a wishlist of features. I’m happy to report that the Switch release has addressed every one of those wishes, and continues to provide an engrossing, surprisingly deep, tycoon experience. Progression feels faster than what was detailed in Ron’s review, and rarely, outside of Brutal mode, did I feel an oppressive cash crunch. I even started off a new aquarium with the largest tank I possibly could on a few occasions, just because I could. Filling said tank with a collection of colorful undersea critters allowed me to quickly rack up ecology and science points, allowing me to line the walls of my little aquatic paradise with smaller tanks filled with anti-social, picky, or aggressive specimens. 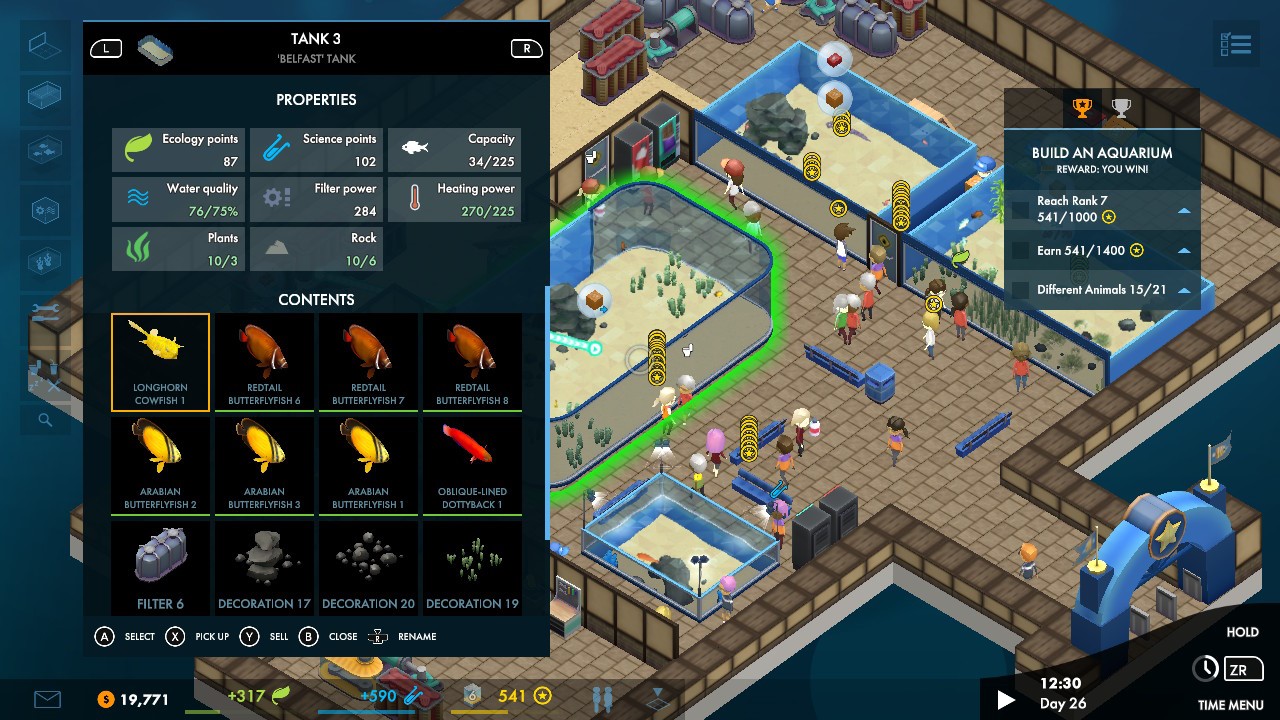 There’s more to Megaquairum than just your colorful floating friends; fish don’t feed themselves, and you’ll have to hire workers to keep your aquarium running. Different people have different skillsets, so it’s important to hire the right person. If you hire a cheap labor force who can feed your fish but don’t know how to fix a broken down protein skimmer, your corals are going to have a bad day. Over time, your employees level up, allowing you to either expand upon or improve their existing skills. You will also be able to set priorities for each worker, ensuring that your rockstar with a wrench is always hurrying to get that broken heater working again, while your new hire who can’t seem to figure out how to put a magazine in a rack spends his time cleaning the bathrooms. You can even create zones within your aquarium, creating workspaces for your employees to focus on, so they don’t waste half their day walking from one end of the building to the other. It’s a great way to keep the ever-expanding sandbox mode aquarium from overwhelming you entirely.

There are always things happening in this game, and I’m not talking about things simply breaking down or getting dirty. You’ll constantly be receiving mail from investors, scientists, and hobbyists, all looking to help you out in exchange for a favor. Some will pay you money to raise a certain species so they can observe it, while others will give you access to a new kind of fish if you are able to trade for a full-grown specimen they are seeking. It keeps things fresh and interesting, and helps break the monotony of the gameplay loop tycoon games often fall into. 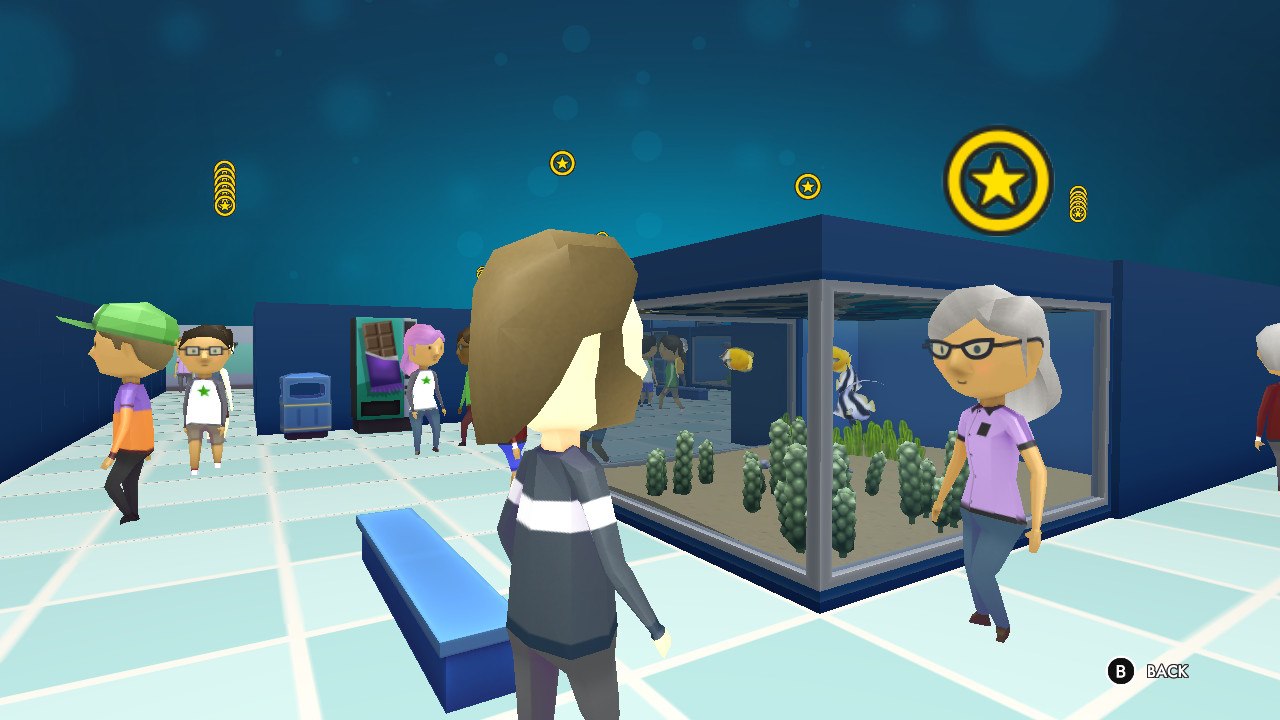 And your fish grow. That Moray Eel may be a great tankmate now, but it will grow up quickly, and once it does, it will start eating any smaller fish it comes across. Learning how different species grow, how much room they will need, and how much they will impact the water quality once they are full grown is an important and surprisingly fun part of the game. Add in the fact that you can zoom in and actually wander through the halls of your aquarium to watch them swim and grow, and you can become surprisingly attached to some of these critters.

The Switch port is solid and quite easy to play, once you learn the controls. It took me a little while get used to using the left Joy-Con buttons to open menus, but now that I have the hang of it, I can’t imagine doing things any different. I do wish that I could use the shoulder buttons to rotate items, but the Y button does the trick. Megaquarium features an unobtrusive auto save, and while there is a bit of a load time when you first start the game up, but outside of that, everything runs pretty smoothly and speedy, with only the occasional hitch. 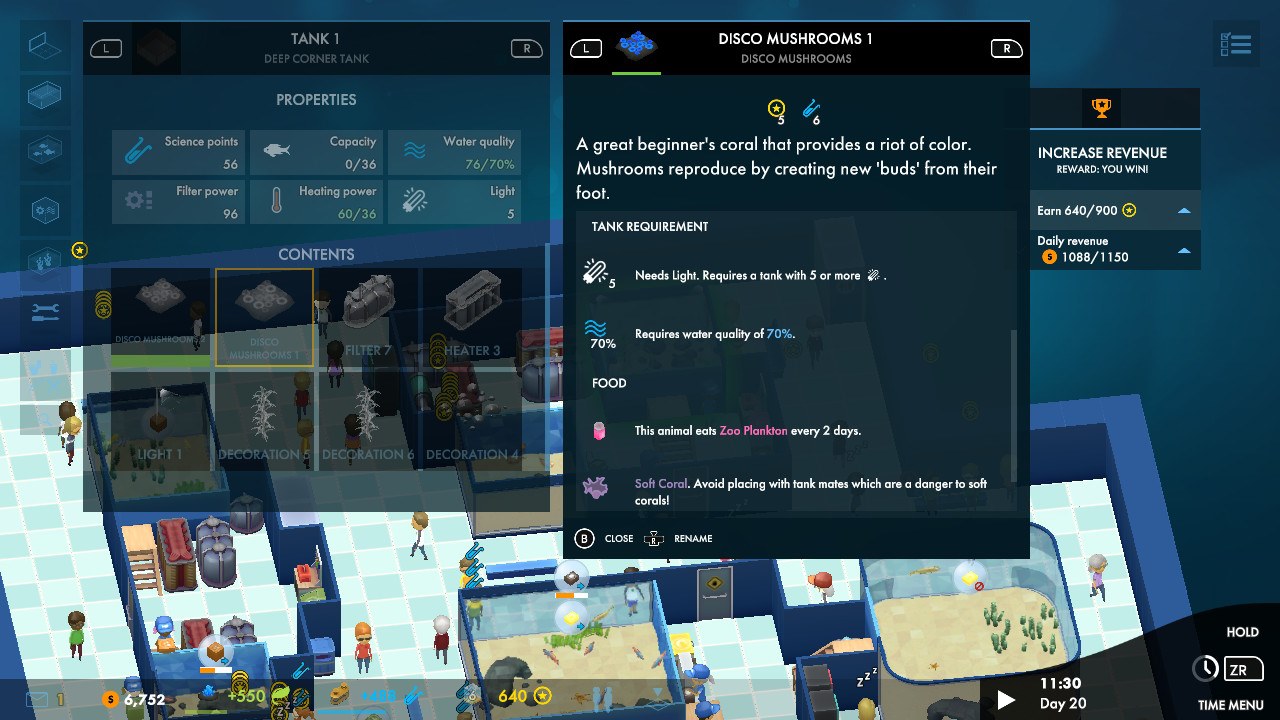 Megaquarium does demand your attention; slip up and you’ll watch a rare species die, an entire tank’s health goes down the drain, or build the wrong kind of environment for that new species you just unlocked, but it’s still surprisingly relaxing. Instead of constantly stressing over staff or money, I found myself maintaining my aquarium while thinking back to the tiny saltwater tank and its curious and delightful inhabitants which livened up my bedroom many years ago. It was a truly delightful way to spend a flight, and a game I have returned to several times since.