Card games and video games alike were a big part of my childhood, along with the childhoods of many others. Sometimes these worlds would collide when digital versions of card games were made available, which eliminated the need to purchase physical decks and card packs until you got what you wanted. One incredibly popular, and to this day, still ongoing example, is Yu-Gi-Oh!. From the card game, to the show, to a boatload of video games, this franchise has kept chugging along since the late 90s. Now we’ve got a cool collection of almost every Yu-Gi-Oh! season to date represented in one portable game on the Switch.

Yu-Gi-Oh! Legacy of the Duelist: Link Evolution is actually a port of Yu-Gi-Oh! Legacy of the Duelist, which was released for PS4 and Xbox One back in 2015, and PC in 2016. This new version is not only portable thanks to the Switch, but it also includes all previously released DLC for the original game. For fans of the series, this is definitely a sweet bonus. I actually played the original back on PS4 and loved it, so I was excited to hop back in after four years. 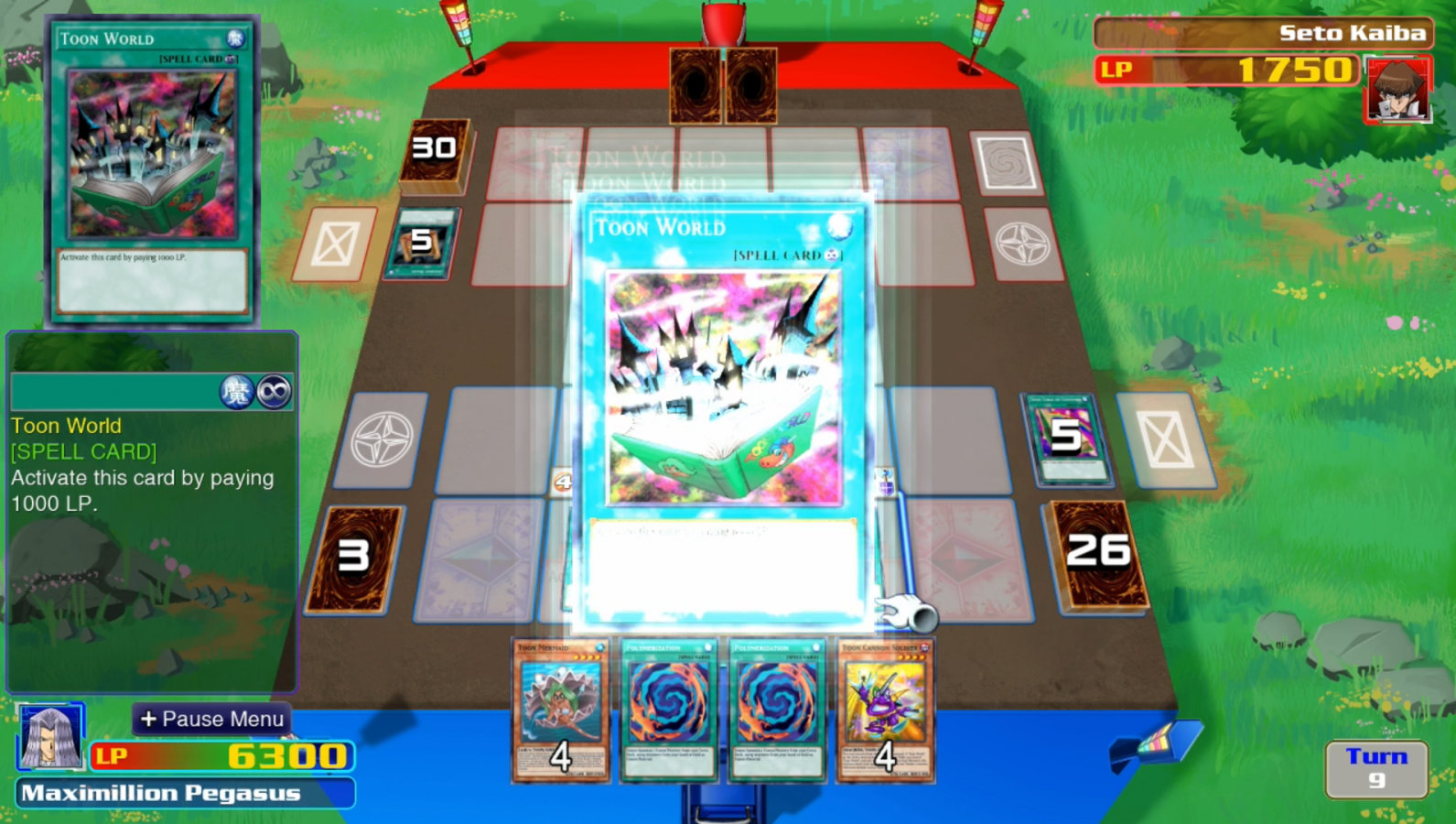 The story of the game follows the stories of each series (aka different characters, plotlines, gimmicks, etc) in a cliffnotes sort of fashion. There’s no overworld or anything; each series has its own tab that contains the most important or memorable duels that happened during it. Each duel gets an explanation of what’s happened up to that point along with a short scene involving the corresponding duelists. The scenes are just still images with text, but for anyone familiar with the shows, these are more than enough to jog your memory. For newcomers, I’d highly recommend going back and watching the shows (at the very least check out the original Yu-Gi-Oh!). The game offers a tutorial to show you how to play, but I feel that the game itself is much better when you’ve experienced the shows that it’s based off. The campaign takes you on a journey through the original Yu-Gi-Oh!, GX, 5Ds, Zexal, and Arc-V storylines, along with a few matches from the newer VRains series.

When taking part in one of the campaign duels, you have the option to either use the character’s current deck from that scenario or your own deck that you’ve built. It’s nice to be able to use your personalized deck against the duelists, but I think it’s better to stick with the pre-made deck. This allows you to truly step into the shoes of the character and do your best to win with their unique strategies. Not only that, but playing with a plethora of deck setups helps you learn more about the cards and develop new strategies. It also gives you access to cards that you may not have unlocked or obtained through packs yet. 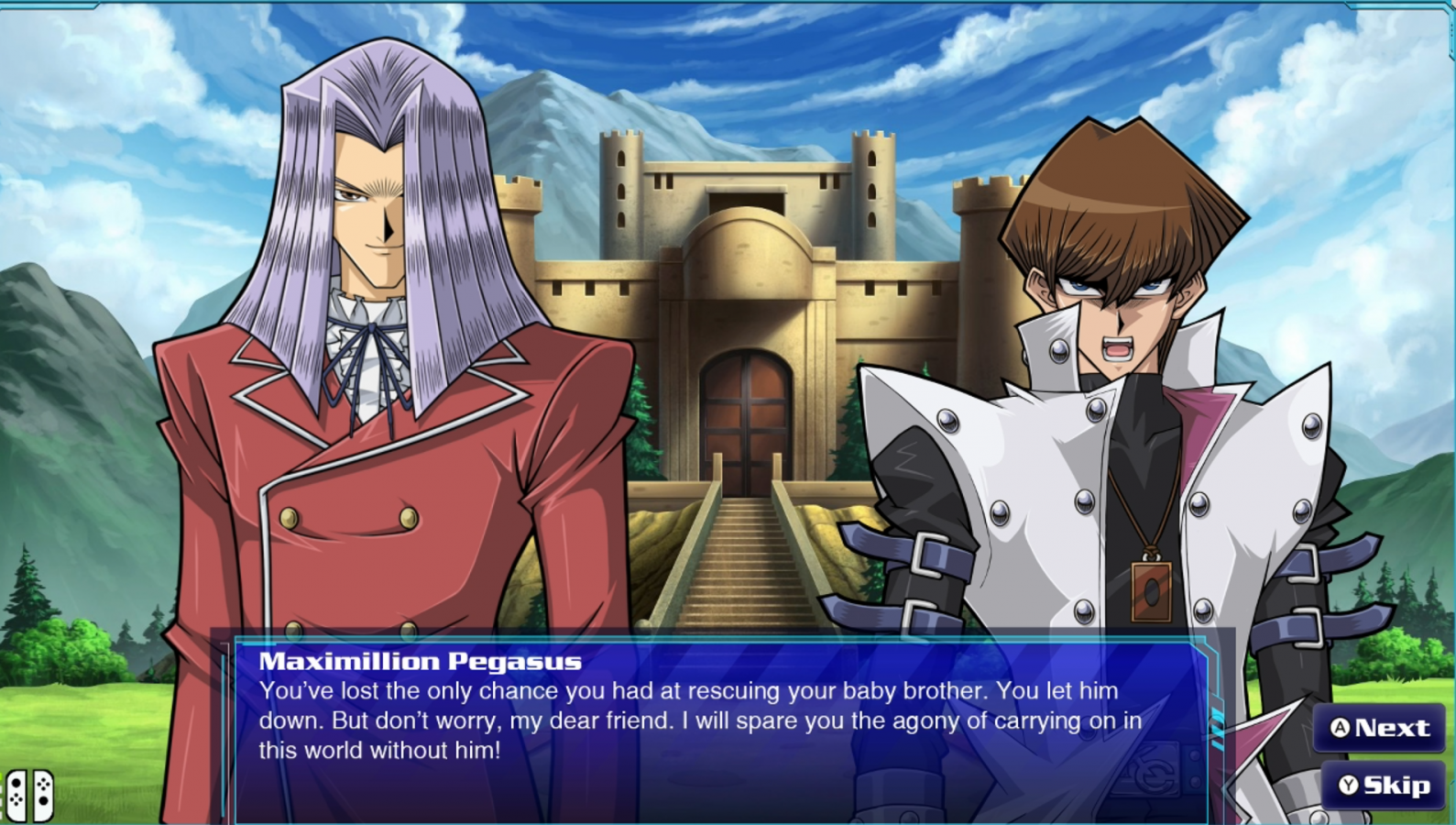 One cool feature is reverse duels. After you win a campaign duel, you unlock its reverse duel; the reverse duel allows you to play the scenario as the opponent you previously defeated. This essentially turns every campaign duel into two duels, which adds more content to have fun with. You aren’t required to complete the reverse duel in order to unlock the next scenario, but doing so rewards you with more cards and battle points that you can use towards buying packs. I’ve personally tried to do as many reverse duels as possible, although some duelists’ decks feel underpowered at times.

As mentioned before, you can buy packs and build your own decks. These packs are bought with battle points that you earn from winning duels. As you play through the campaign, you unlock various booster packs to choose from. These are separated by the character who uses the cards or at least follows a theme relating to them. One of the earliest ones you get access to is the Grandpa Muto pack. 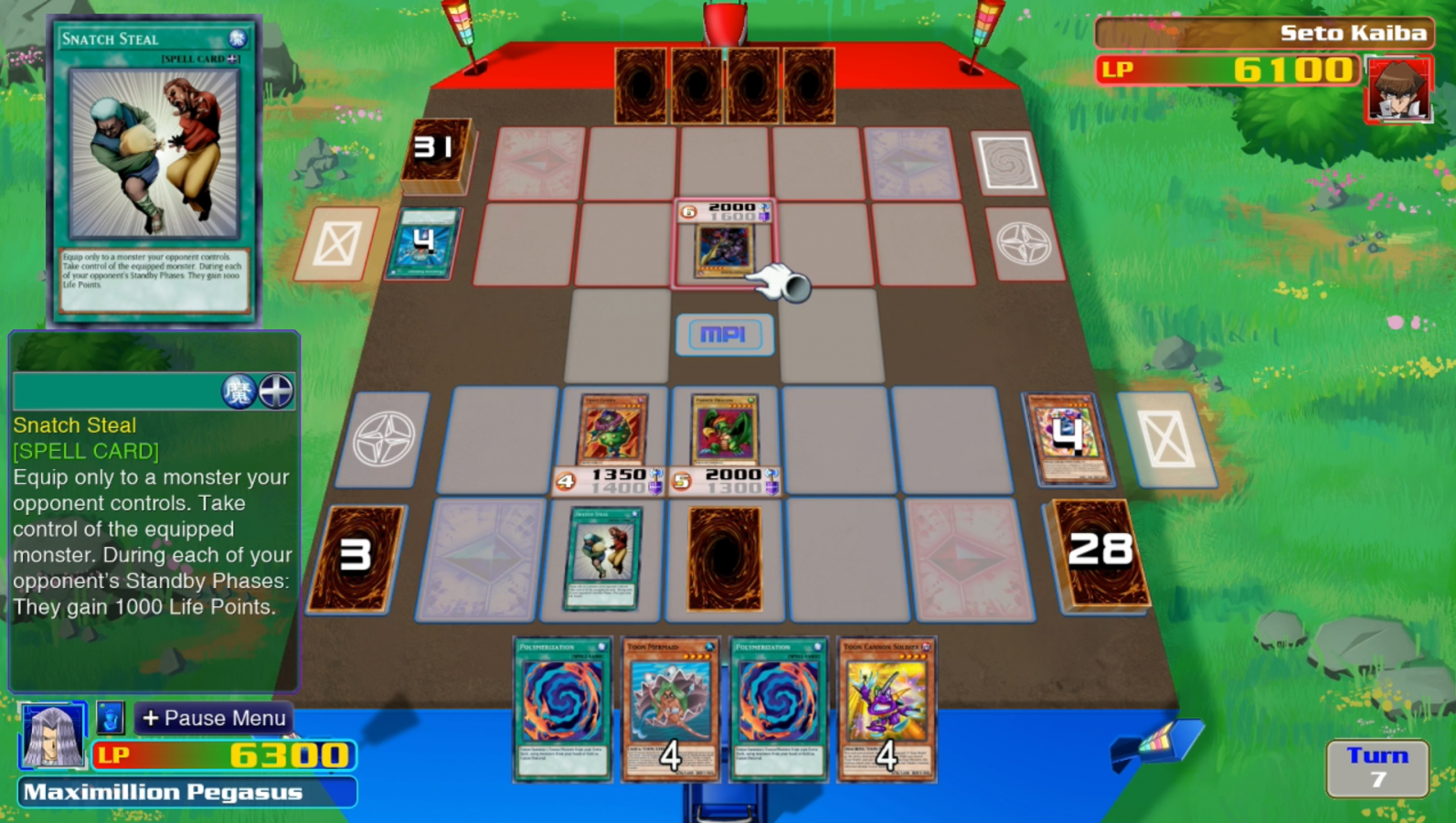 Besides the campaign, there are also multiplayer, duelist challenges, and battle pack modes. Multiplayer was my biggest worry and it unfortunately confirmed my fears. I had a hard time even finding any matches, and when I finally found one, I regretted it. Not only did the gameplay drag on during my opponent’s turn, but my actions were pretty delayed on my end as well. I could see my cards, but had to wait until the prompts to use them came up. Nothing like this happens during single player, and these kinds of slowdowns really take you out of the game. It almost makes you wish you were literally taken out of the game.

Duelist challenges is a mode where you can challenge characters from the show to duels outside of the story. The difference here is that they are using the best version of their decks, so make sure you’ve built a good deck of your own. The challenge here is real and you’ll feel great after proving that you can take down these seasoned duelists. 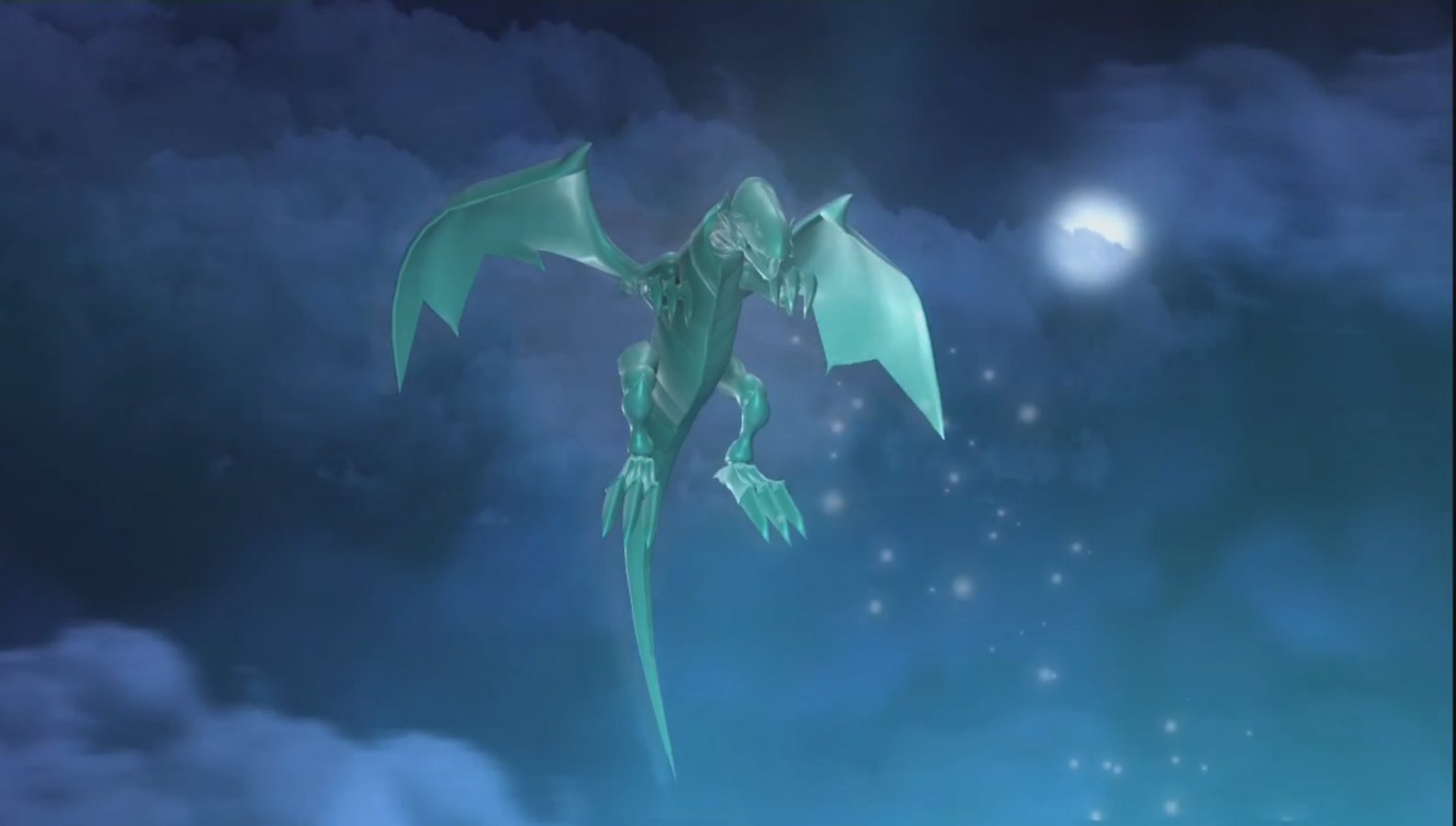 Battle pack mode is pretty interesting as well, as it acts as a randomizer mode of sorts. There are two variations: sealed and drafted. You choose one of the battle packs and spend 2000 battle points in order to start. Choosing sealed gives you a deck built from the 50 cards that you get in the battle packs, while choosing drafted opens up a bunch of packs and lets you choose 45 of them to build your deck with. Both variations are fascinating and test your ability to craft strategies from a mismatch collection of cards. Each variation tasks you with winning five duels and after you’re done, you get to keep the cards that you used. You can also take a break between duels and come back to continue later, which I appreciated.

In terms of gameplay, veterans of the franchise will be pleased to know that nothing has really changed. The only changes are the obvious gameplay mechanics that get added in later parts of the series. For newcomers, as I previously mentioned, there’s a tutorial to help you out. The more you duel, the better you’ll get the hang of things. Yu-Gi-Oh! isn’t a hard game to learn, although the more recent iterations add more complex mechanics. Even so, the difficulty comes from the luck of the draw combined with your strategic strengths more than anything. As a longtime fan, even seeing my plans get reversed or knocked down only prompted me to make a comeback. 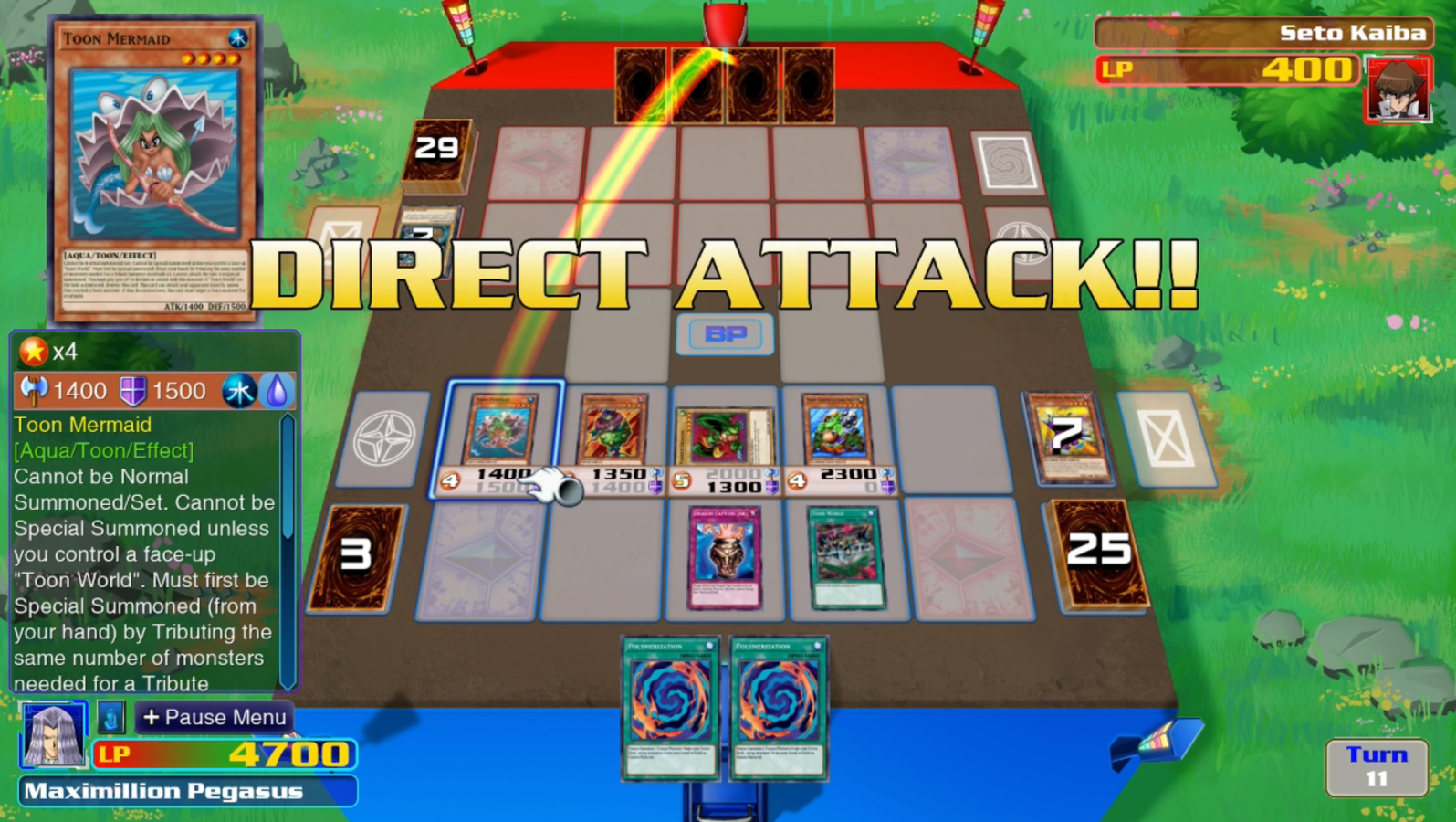 All in all, even after having played a previous version of this game, it’s still nice to be back in it after four years. If you’re looking for some nostalgia, an entertaining journey through the history of Yu-Gi-Oh!, or are even just trying to get into the game as a newcomer, then Legacy of the Duelist: Link Evolution is a great choice. There are over a hundred campaign duels to take part in (double that if you count reverse duels), along with two other modes to jump into. If you’re looking for more multiplayer focused action, then you’re better off steering clear. As I mentioned earlier, I had a hard time finding a match, and even when I did, it was awful. That being said, for a single player experience, you can’t go wrong here, especially since you can take it on the go with you. So grab your deck, believe in the heart of the cards, and shout “It’s time to d-d-d-d-duel!”

Yu-Gi-Oh! Legacy of the Duelist: Link Evolution is a great compilation of the franchise's history. With tons of challenging campaign duels, duelist challenges, and battle packs, there's plenty to scratch that card game itch. Multiplayer is scarce and laggy, so I'd steer clear.

Codi loves to play video games and watch movies. He will watch almost any kind of movie just to experience them. His ideas take inspiration from the shows and movies he watches, and games he plays. He also loves a good pun.
Related Articles: Yu-Gi-Oh! Legacy of the Duelist: Link Evolution
Share
Tweet
Share
Submit