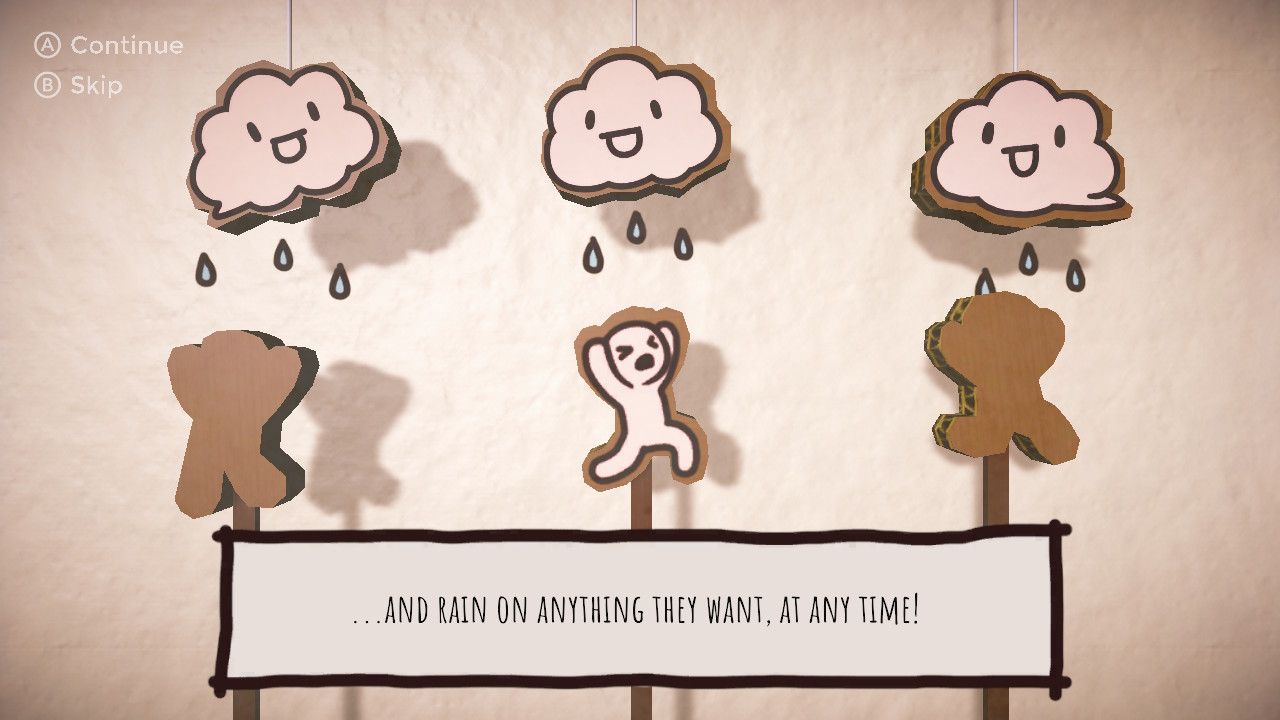 Look, I may have gotten a PlayStation 5 for Astro’s Playroom, but I’m waiting for a next-gen iteration of the Katamari Damacy series to come my way. In the meantime, I’ve been filling up the ball-shaped hole (please don’t read into that) on my Switch with wacky games that are like Katamari Damacy but aren’t. Donut County, Untitled Goose Game, and Part Time UFO have a quirky similar feel, but they lack the eternal chaos that the Katamari series provides. Thankfully, I didn’t have to go far to find Rain on Your Parade, a game with a silly premise that tickles my funny bone and feels innovative with every turn. 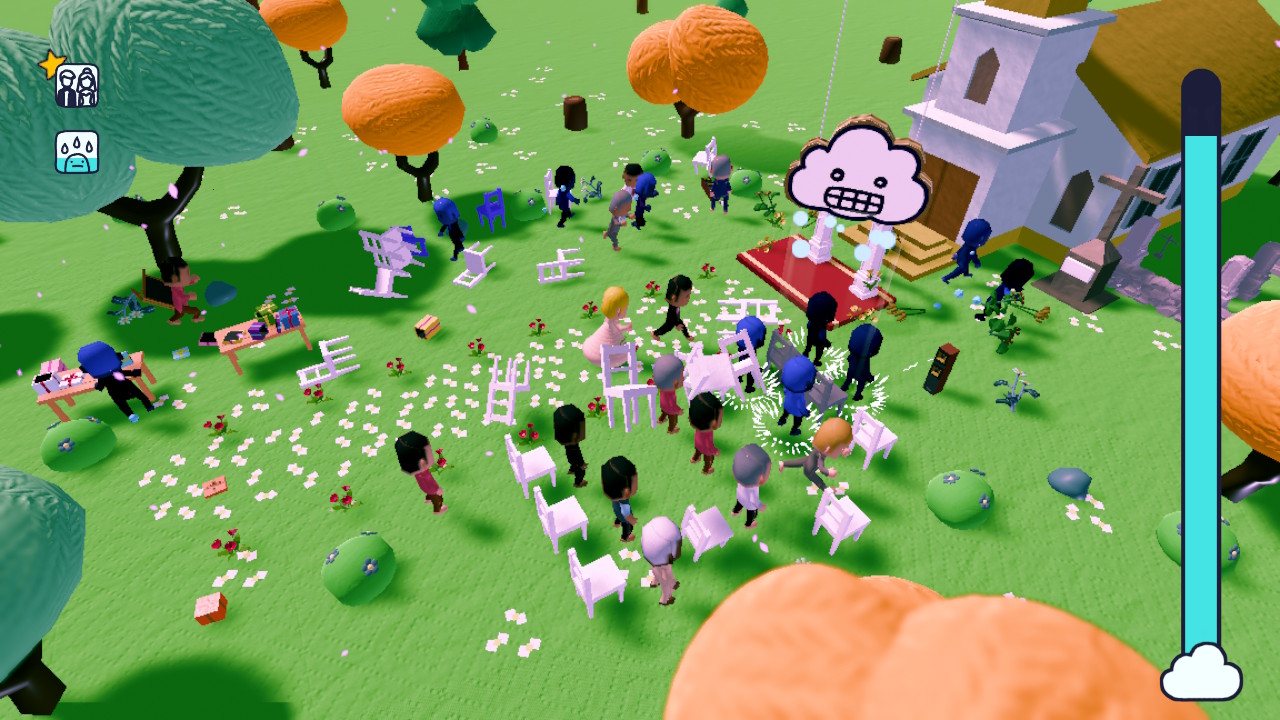 In Rain on Your Parade, you control Cloudy, a mischievous little cloud that wants to go to Seattle (where it’s always cloudy!) and will stop at nothing to wreak havoc and inconvenience the public’s day. In fact, the game immediately plops you into a wedding in the first stage as you learn the power of soaking everything and everyone in your path. Each face button corresponds to a power that Cloudy has, from your initial rain downpour to snowfall to lightning and a tornado. Both rain and snow require water to operate, which will deplete as you continue to use those powers. The people (named hoomans here) can easily be moved around as you are a literal force of nature. It never gets boring to water down a group of people, and mixing this with lightning makes for a cathartic release when dealing with the recurring Dr. Dryspell and his minions. 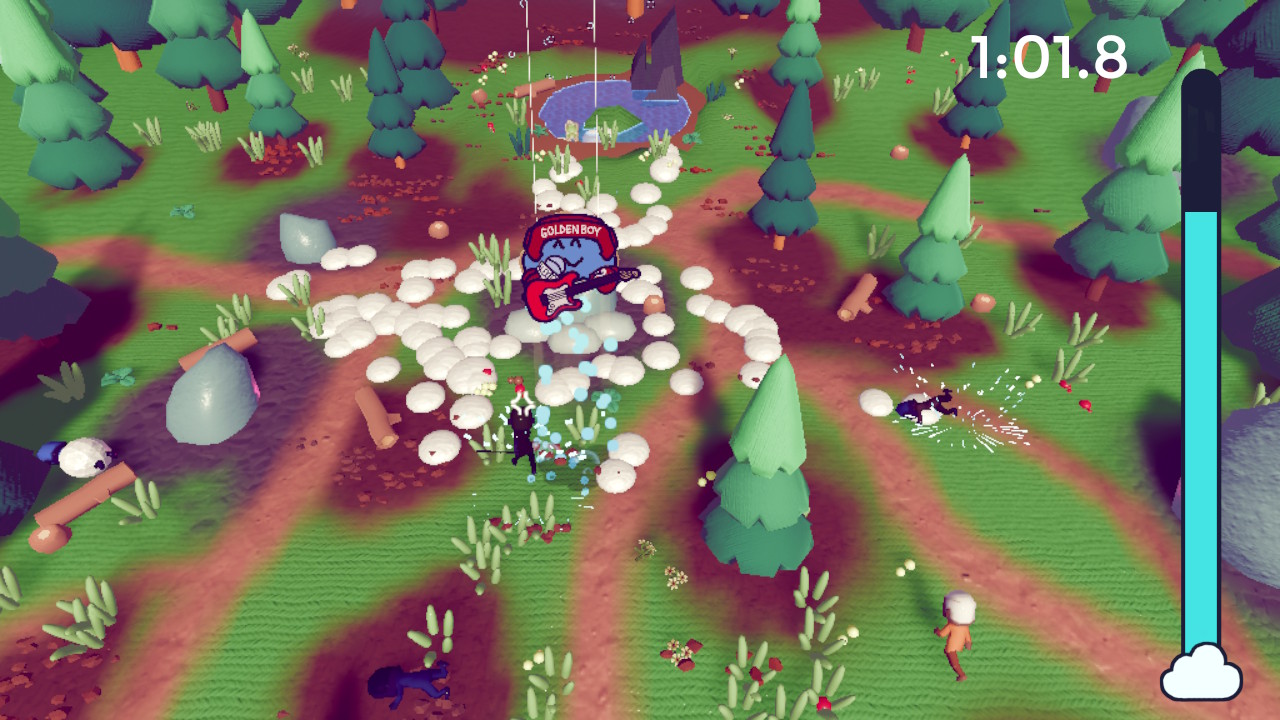 What makes the game hilariously fun is the fact that the controls are perfectly balanced to be tight while also allowing some slippery physics to not make the game too seriously rigid. Hoomans bounce like ragdolls constantly (thankfully they don’t die, as one of the conversations will assure you), and there’s enough chaotic elements in the area that it’s charming and goofy rather than frustrating. The game is a bit easy for the most part, but there are some objectives that will challenge completionists out there. There is a surprising amount of customization for Cloudy, as you will collect items, which you can change on the fly, by 100% completing a stage. Some stages have hidden objectives which you’ll have to try and explore, which makes for some replay value.

The best part of Rain on Your Parade lies in the sheer variety of missions. It almost feels like What the Golf in terms of absurdist humor and randomness of each mission. For a game with four main moves, it uses them quite well and in some pretty zany ways. You have stages where you have to wreak the most havoc (a score attack with a mosh pit comes to mind), but there are some stages that also use the power of converting your normally freshwater rain into acid or even oil to burn cars and generally cause a mess. 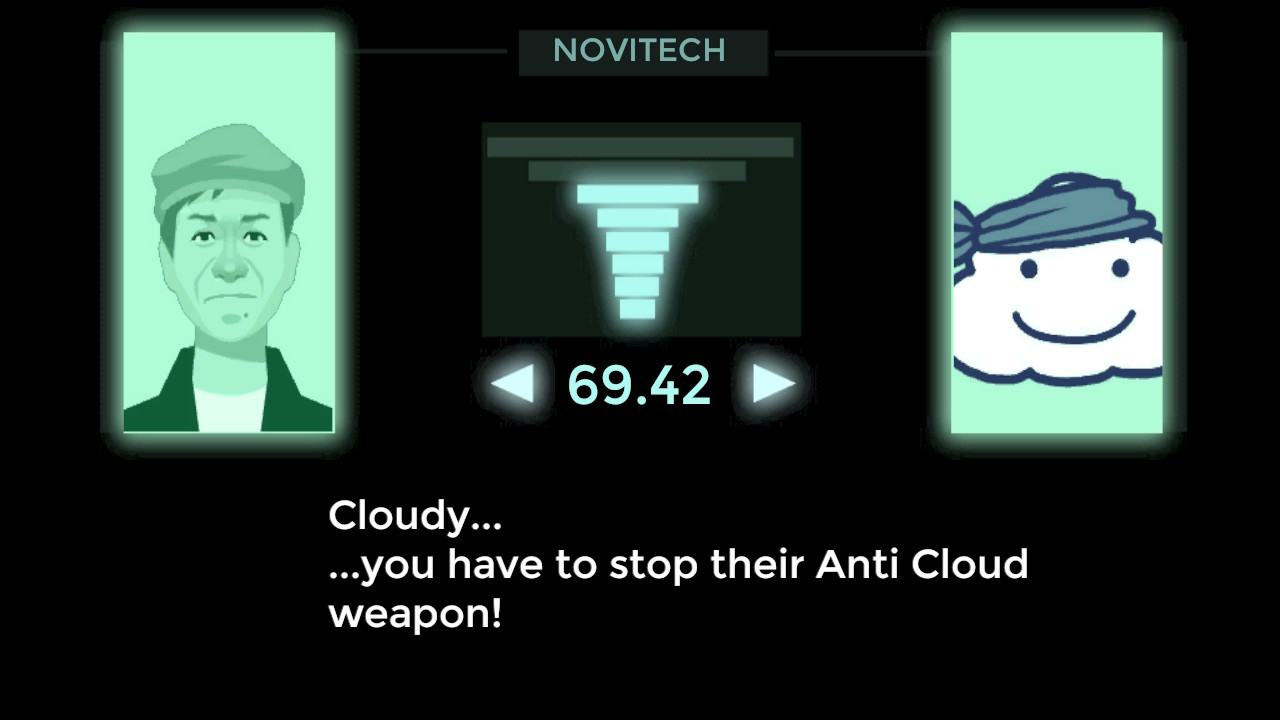 The longer stages in the game include multiple missions and are easily the best part of Rain on Your Parade. A couple of standout favorites are a group of missions that take place in a parody of The Office (complete with impersonations of the cast), and a George Romero zombie-type movie where you have to turn the public into zombies by using rain. Even the tornado segments are reminiscent of Katamari Damacy, since a lot of those stages involve sucking objects into the tornado and whipping it around back and forth. There are also tons of references to pop culture here, including video games like Metal Gear Solid and DOOM. It’s fun trying to sneak around like Solid Snake in order to infiltrate an enemy base… and then forgoing the mission at the end to zap all the baddies with lightning. It’s a funny game with all-ages humor that can be enjoyed by the whole family. I was floored by how many different references were included in the unlockable items with which you can equip Cloudy; heck, there even was a ProZD item in that batch! Pretty neat. 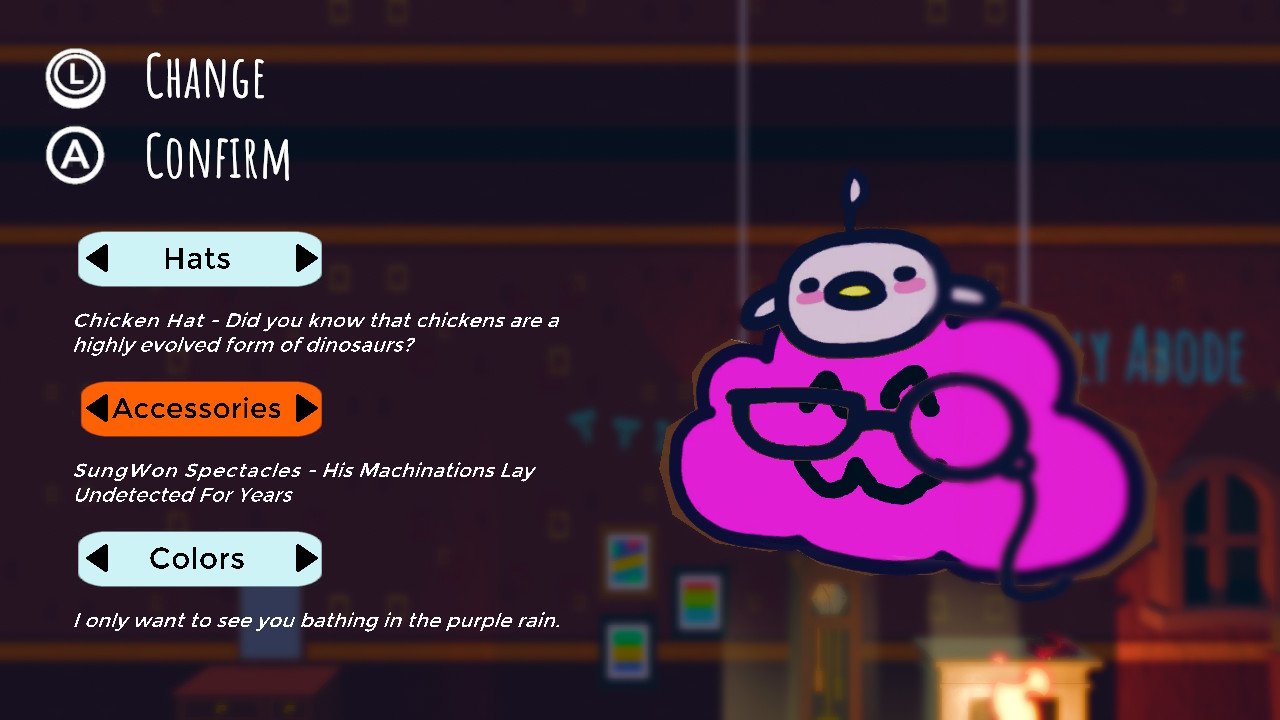 However, while the breakneck pace makes it so that there’s not a dull moment, this is also a flaw in the game, as it never really dwells on a concept long enough to flesh it out. Most of the stages last about a minute or two, and unless you’re going for unlockables or just want to try beating a high score in one of the scored levels, there isn’t much incentive to go back to them. Thankfully, the longer levels (which will take about 5 to 10 minutes to complete), outweigh the shorter ones, and there was not a boring moment during my 3 hour runtime of the main story. (Okay, there WAS one mission where you literally press nothing for a high score, but that was the only lull. Promise.) 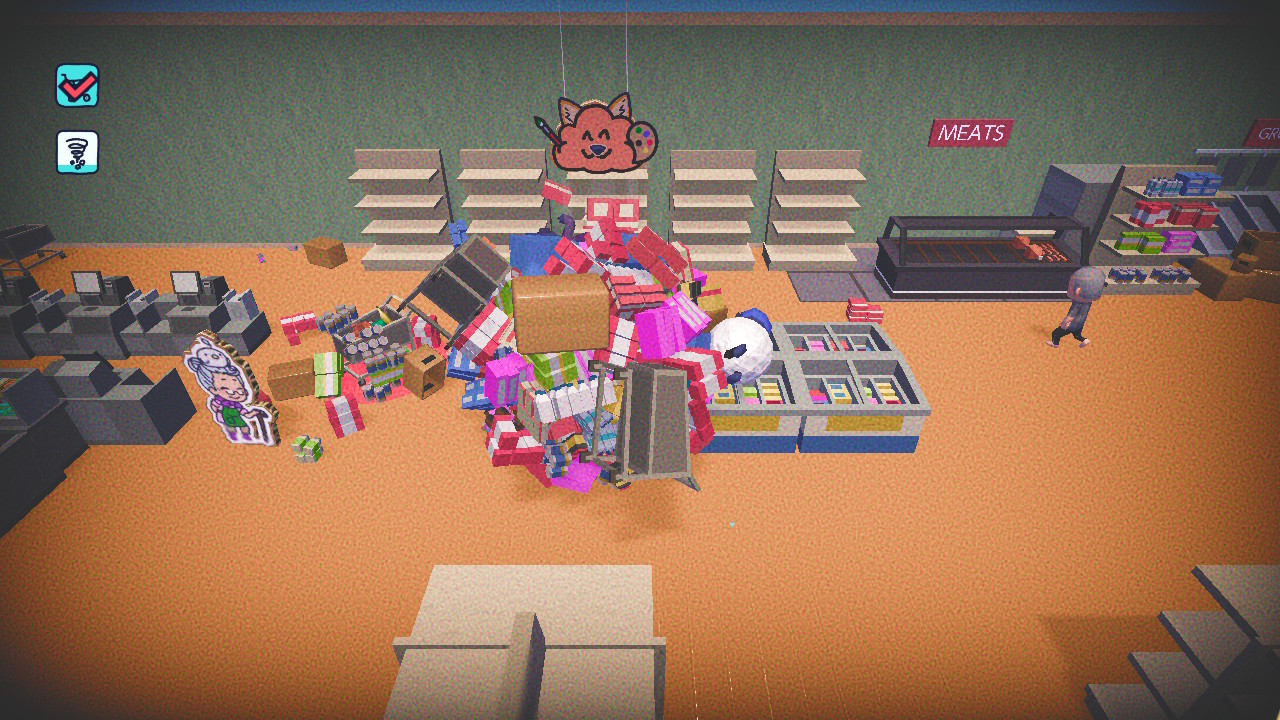 In terms of presentation, the graphics are charming and have a Saturday morning cartoon feel to it. Cloudy and some NPCSs are rendered in cardboard while other objects are in a minimalist 3D style. It’s a nice contrast that pops with the colorful graphics. There are a few hiccups here and there when playing in handheld mode, but it’s alright when docked. The music is a bit of a weak point, with some stock tracks being used to grating effect. It’s not a dealbreaker, but I would have appreciated more original tunes than what was offered here.

Rain On Your Parade

Rain on Your Parade has made me feel emotions for a cloud that I have not felt... well, ever! With a charming aesthetic, entertaining pop culture humor, and a wacky premise, you should play this game if you want to spend a weekend ruining a bunch of people's lives with water.

Elisha Deogracias is an aspiring accountant by day, freelance writer by night. Before writing for Gaming Trend, he had a small gig on the now defunct Examiner. When not being a third wheel with his best friends on dates or yearning for some closure on Pushing Daisies, he's busy catching up on shonen manga and wacky rhythm games. Mains R.O.B. in Smash. Still doesn't know if he's a kid or a squid.
Related Articles: Indies, Rain On Your Parade
Share
Tweet
Share
Submit