There are tales of vast riches in a mysterious castle filled with monsters. Many have tried to fight their way past these beasts in the hopes of claiming this reward, but all have failed. Unfortunately for them, this castle is home to The Summoner, a powerful being who will do anything to get rid of intruders. Even so, you feel confident enough to enter the castle and take on this challenge. Devious Dungeon 2 keeps most of the same simple yet enjoyable combat and platforming that made the original good, but added just enough to make it worth coming back to.

Devious Dungeon 2 is a pixelated action platformer that is easy to learn, but keeps you engaged. The gameplay consists of simply running, jumping, and attacking, but just because the controls and premise are simple doesn’t mean you can run in recklessly and succeed. The first game was like this as well, but since the sequel adds some new enemies alongside creatures from the original, you have to tread carefully, even if you played the original. If you rush in without thinking, especially late in the game, your health will get shredded. In other words, be careful when facing foes such as cannon goblins, wizards, butchers, and giant frogs. 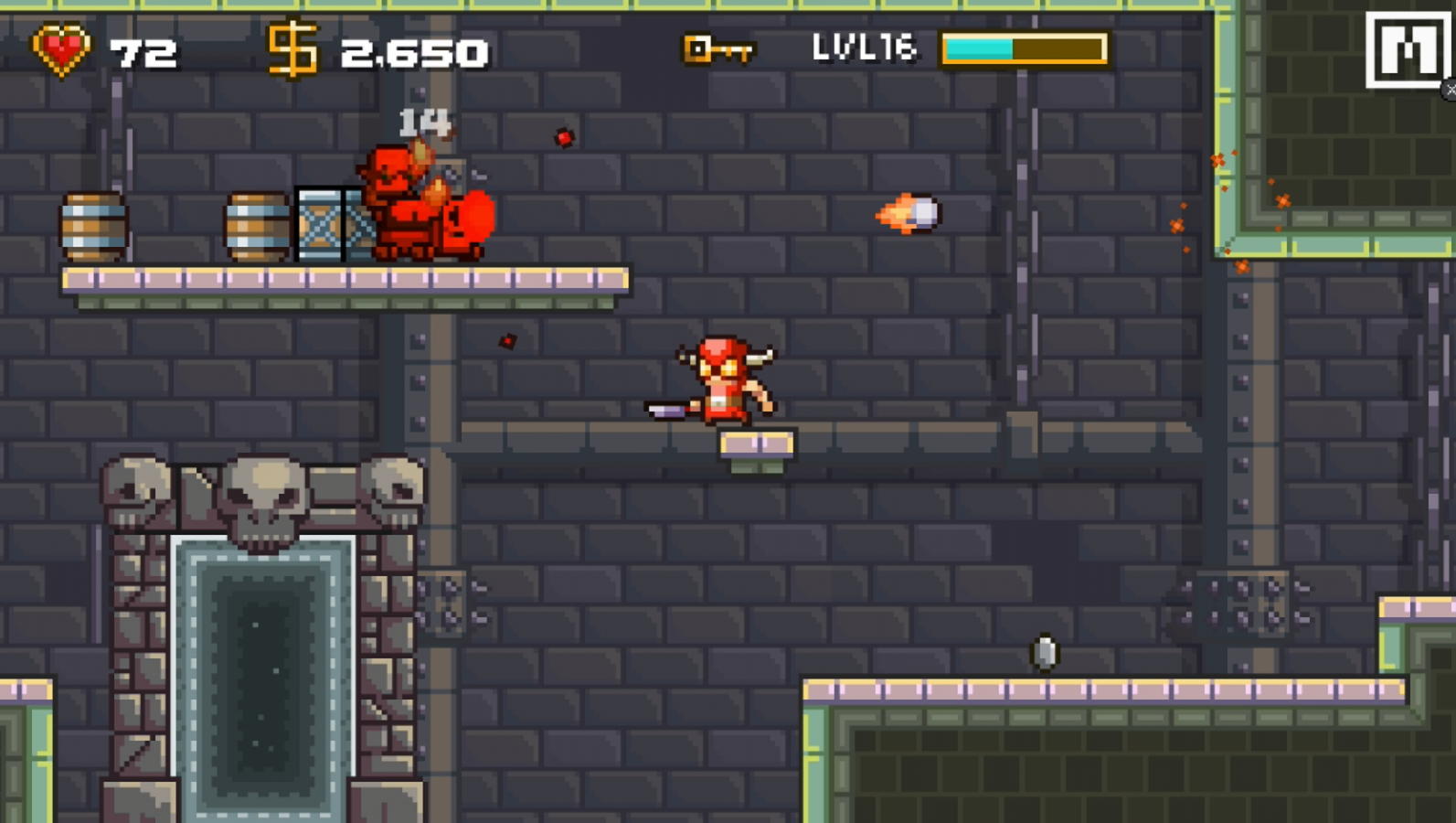 One new aspect I liked was being able to choose one of three classes. The original only had a default warrior, but this time around you can be either a barbarian, a mage, or a rogue. The barbarian is essentially an updated version of the original character, except they have a special ability now. The barbarian only uses melee weapons, such as swords and maces, but has a passive damage reduction to protect him during combat. The mage uses wands that shoot energy and he can levitate for a short time with the press of a button. The rogue can use both melee and ranged weapons, and also has the ability to double jump.

Each character’s playstyle varies based on their equipped weapons and abilities, which I appreciated compared to the first game. Each class also has different starting stats for damage, health, and critical hit chance, so take that into account as well. I immediately went for the mage because I liked the idea of having some attack range this time around. Not to mention that the levitating sounded cool, and it happened to be incredibly useful during my playthrough. The amount of gaps that I was able to traverse easier, along with catching myself partway through some falls, brought plenty of relief. One trick I learned quickly and used quite frequently was jumping into the air and levitating at the perfect height to hit an enemy above me, then floating just out of reach as they went to attack. You only get to float for a few seconds, but with no cooldown other than having to touch the ground, you’ll likely use it a lot as the mage. 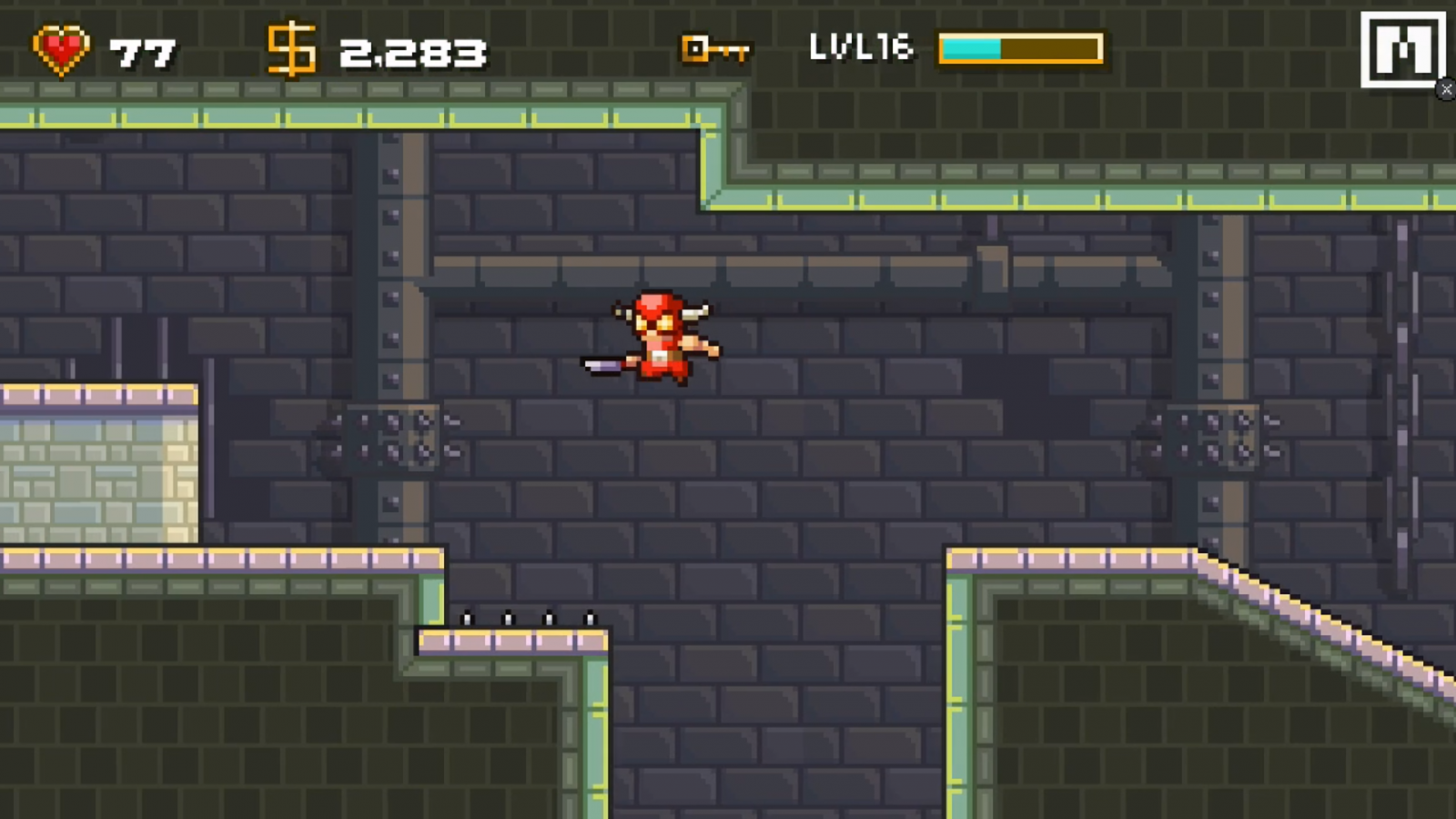 As with the first game, the game is broken up into multiple sections, each with their own procedurally generated levels. No two levels will ever be the same, even if you die on a level and have to retry it. Reaching that level again yields a completely different layout and enemy spawns. This keeps the game fresh since you never know what to expect. At the end of each section, there’s a boss to fight. If you learn their patterns and fight carefully, they aren’t too tough, but some can still be annoying. Some attack patterns are tedious to work around and other times you need to change your weapon in order to be more effective. For example, two different bosses required me to swap to an older wand in order to beat them easier. Around every five levels, you’ll be taken to Olaf’s caravan to buy items from his shop and get healed by the priest for 50 coins. With how easy it is to collect money in the game, the priest’s price is as affordable and worth it as it was in the original. In case you die, the upside is that the caravan and boss rooms act as checkpoints, so you can warp back to them easily.

One thing that the sequel kept that I didn’t like was having to buy equipment in a specific order. To unlock the next step up in equipment, you first need to buy the previous option, even if you have no interest in it. Sure, you don’t have to equip it, but the fact that you’re forced to spend money on it to get access to better stuff is a pain. This being the case, I had a few times where I saved up enough money to buy a wand that I didn’t want and also instantly buy the following wand in order to avoid the first one. Sometimes you’d go from a wand that could freeze enemies to one with no special effect. The only benefit was that it had a few more damage points than the ice wand, but losing that effect was a bummer. Effects such as slowing down enemies, burning them, and poisoning them did wonders during some of my fights. 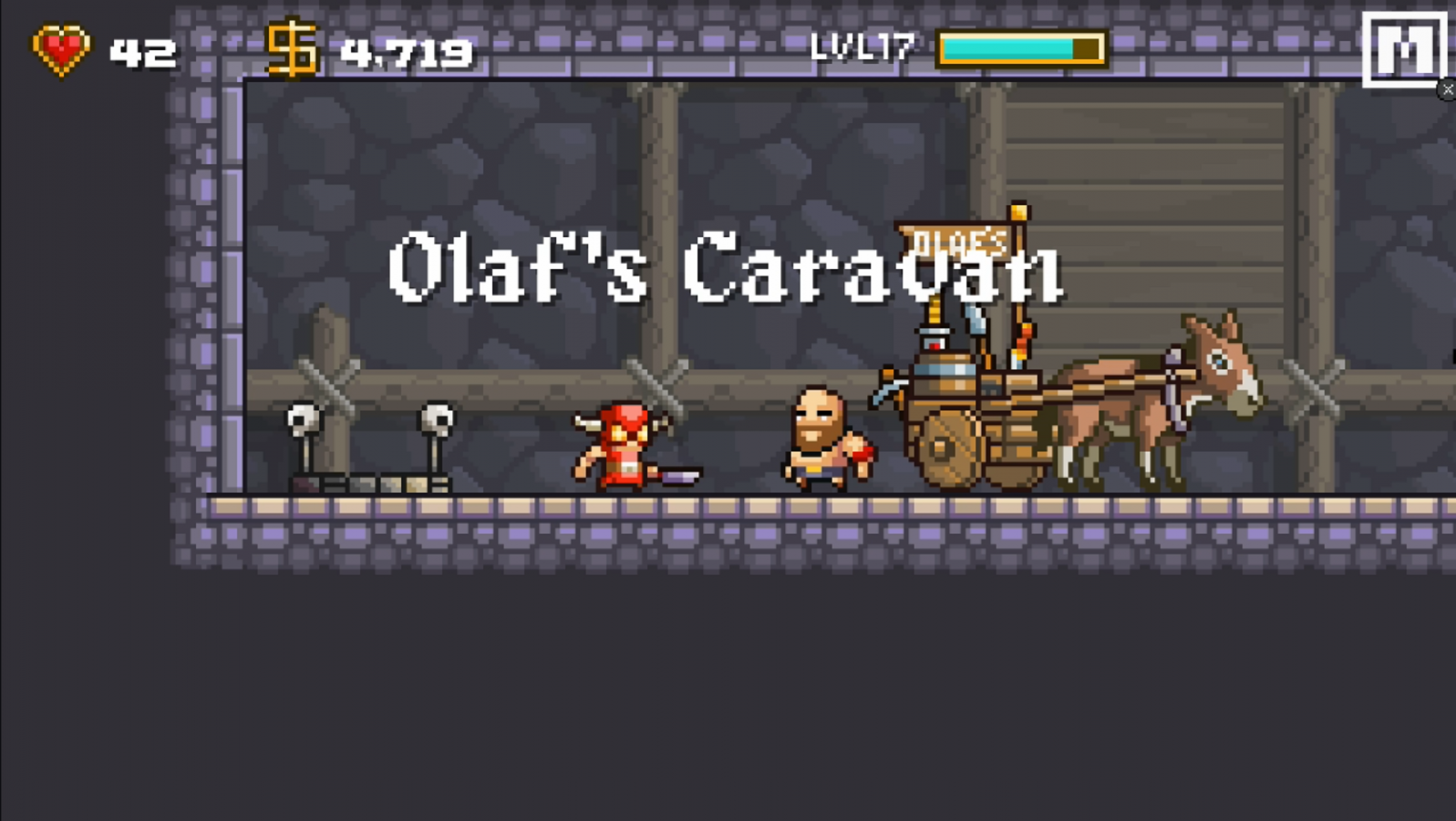 In addition to weapons, you’re also able to buy armor, potions, and trinkets. The rings and amulets from the first game have been removed and replaced with trinkets. The upside is that you have to buy fewer items, but it has one downside: you can only equip one trinket at a time. You still have to buy them in order, but the stats they change and by how much have no static consistency as you progress. This caused me to stop buying them after a short time. The potions, however, stack on each other and become incredibly useful. They offer permanent stat boosts and are more than worth their price. The last couple of the stockpile offer some pretty awesome boosts considering their costs. The armor only increases your max health, but it does so in larger amounts than it did in the first game, which made me feel more powerful.

As you defeat enemies, you’ll gain experience and level up. Leveling up lets you choose between raising your damage, health, or critical stat. Choosing damage increases your damage by one, health raises your max health by two, and critical increases your critical hit chance by 1%. In addition to enemies, you can also find hidden tomes that grant large boosts of experience as well. Along with these tomes, you can find treasures that offer big chunks of money as well. Tomes and treasures won’t always be together, but there are times when I did find them together. 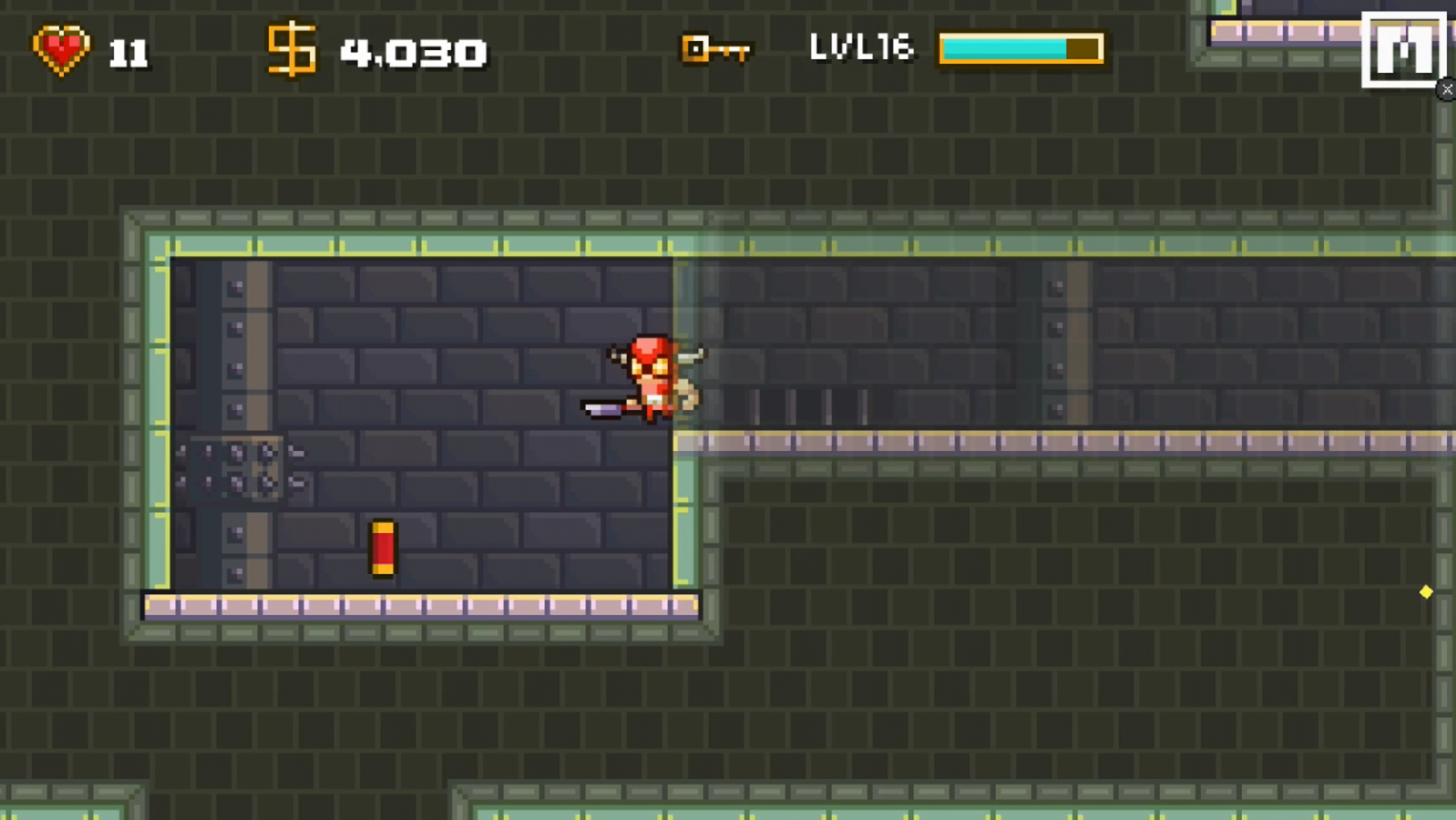 As mentioned before, the gameplay is simple yet engaging. You can pick it up quickly, but you’ll need to be careful if you want to make it far. The pixelated designs of the characters, enemies, and world are charming and offer a feeling of nostalgia. The sounds add to the medieval fantasy tone and fit pretty well too. Devious Dungeon 2 is a wonderful sequel and makes enough changes to make you glad you came back for more. It will only take a few hours or so depending on how well you do, but it’s worth it if you liked the original or just want a fun little action platformer.

Devious Dungeon 2 is an entertaining action platformer that adds onto the original's premise. Choosing a class made the game feel different enough while still retaining its charm. Buying equipment in order was still a drag, but it doesn't hurt the game too much.

Codi loves to play video games and watch movies. He will watch almost any kind of movie just to experience them. His ideas take inspiration from the shows and movies he watches, and games he plays. He also loves a good pun.
Related Articles: Devious Dungeon 2
Share
Tweet
Share
Submit