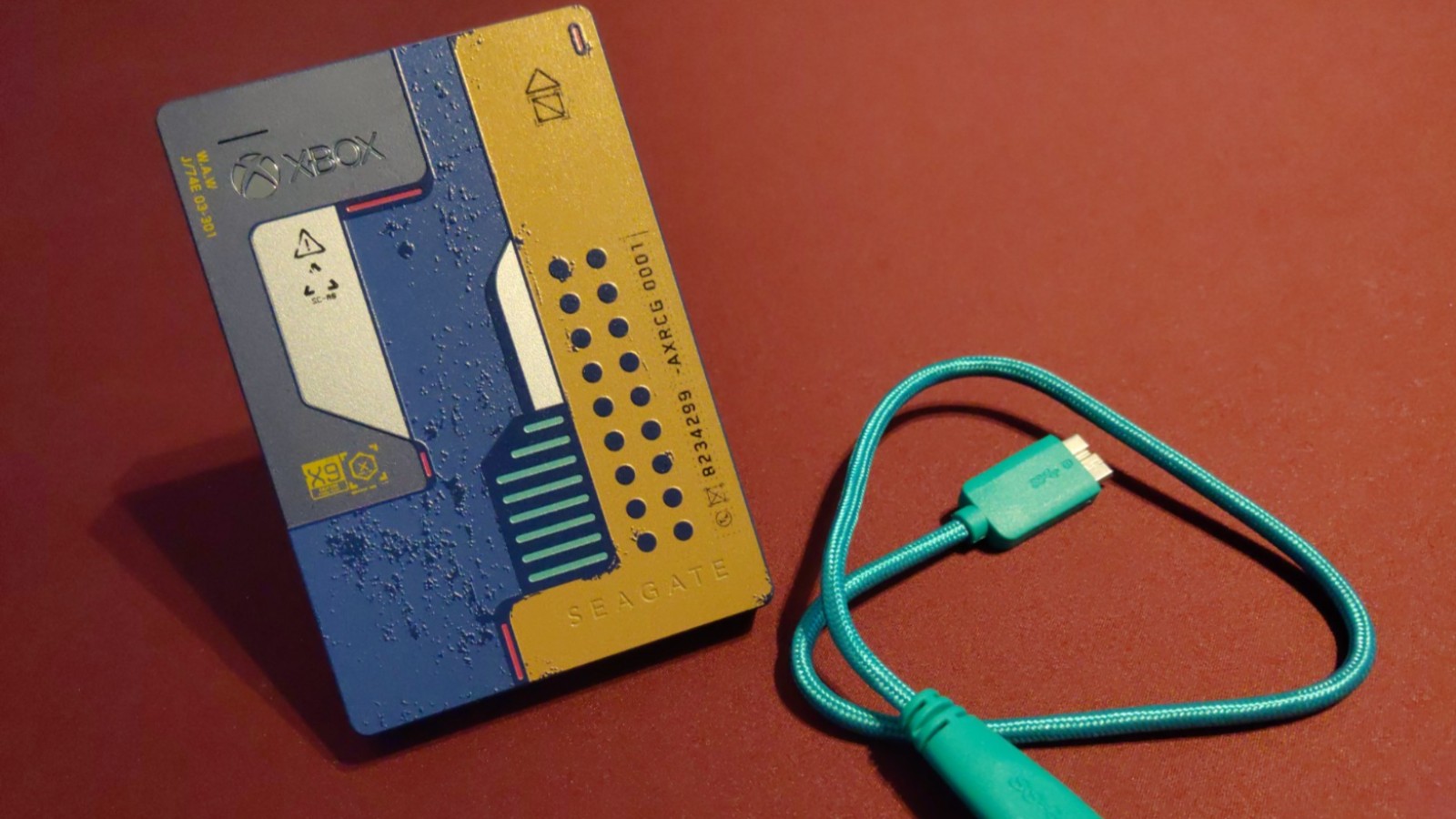 If you are anything like me, you’ve got Cyberpunk 2077 fever pretty bad right now. While the original April 16, 2020 release date came and went, the CD Projekt RED team assures us that the September 17th, 2020 release date is locked in. One of the other things we can be sure of is that this game is going to need a lot of room to stretch its legs. With their previous effort from 2015 (The Witcher III and it’s expansions) hitting over 80GB, and games getting larger every day (Watch Dogs 2 – 100GB, Final Fantasy 15 – 148GB, Middle-earth: Shadow of War – 151GB, Gears of War 4 (110GB), Halo 5 (113GB), or Quantum Break (180GB)), it’s clear that we need more breathing room than a 1TB internal drive can offer. There are a wealth of external drives out there, but few look as cool as Seagate’s newest external drives. This time we’ve gotten our hands on one celebrating the upcoming launch of Cyberpunk 2077. Let’s dive into the performance and aesthetics.

Since these drives are plug and play, formatted and ready to go with a single button press, I’m going to focus on performance, looks, and price. As the limited edition drives are a rotational storage drive, it has a maximum speed of around 140MB/s, whereas SSDs can hit upwards of 550MB/s (Such as Seagate’s own Game Drive for Xbox – our review). The problem, of course, is the price difference as this Cyberpunk 2077 drive retails for $89.99 (2TB) and $149.99 (5TB), whereas the SSD is $329 for 2TB — nearly 4X the price. Let’s fire up our hard drive testing systems and see where this one lands. 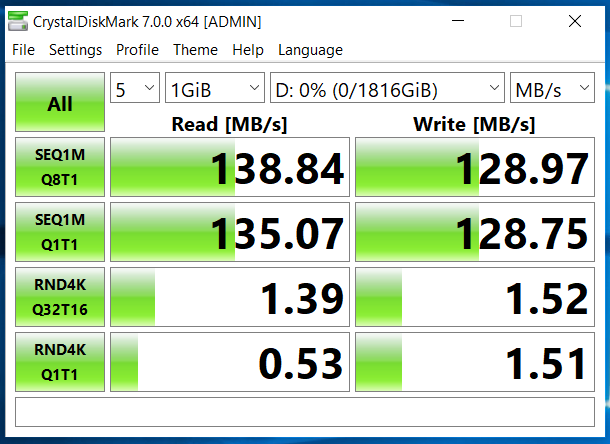 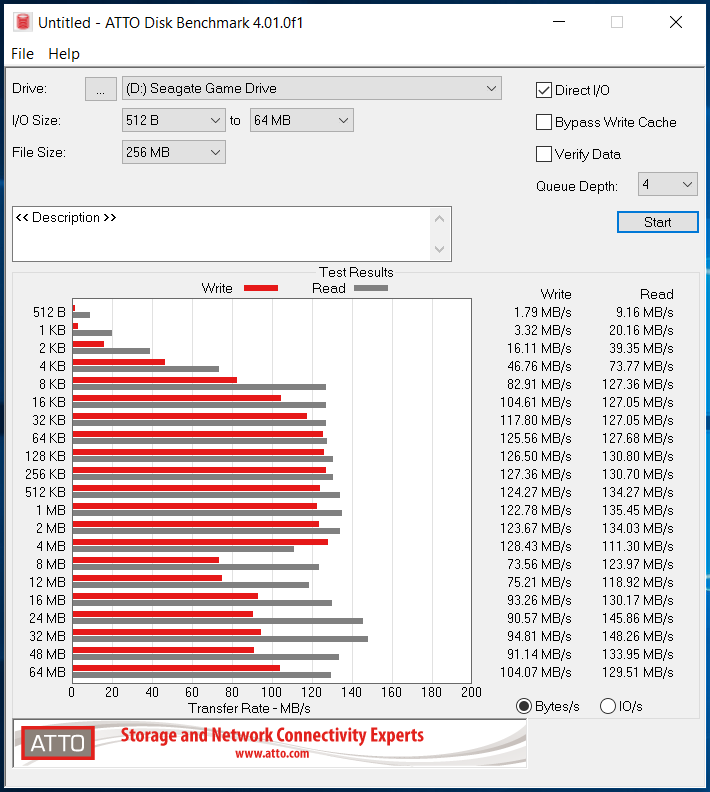 ATTO results across a wide variety of file sizes.

As you can see, despite being a rotational storage medium, Seagate’s engineering is rock solid, delivering at or above the rated speeds across any file larger than 64 KB. Like we saw on the Gears of War special edition drive (our review), it outperforms most mechanical drives which hit much closer to a real-world 90 MB/s write speed. You can see where the reads and writes hit the edge of the platter, picking up speed once again as they move towards the inner edge and center. Running this benchmark multiple times yielded almost exactly the same results, as did running it again after dropping a full terabyte of data onto it. It’s nice to see that level of consistency.

Beyond synthetic testing, the aforementioned copy is a great example of real-world use. Grabbing 30GB of files and moving them to and from the drive produced solid results. Copying to the drive remained in the 130 MB/s ballpark throughout. Copying those same files back, it’s clear to see the cache in action, with a taper off back to around 140 MB/s once said cache was exhausted. Again, highly consistent. 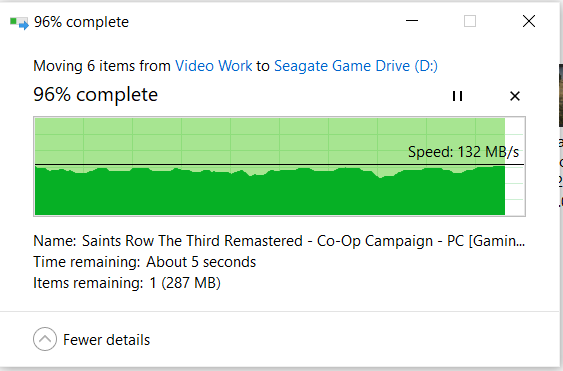 Copying to the drive. 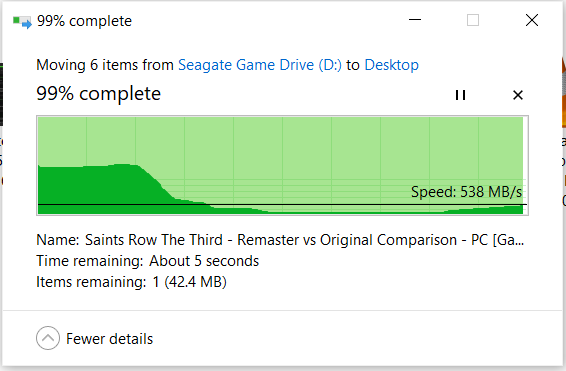 Copying from the drive. Note the cache effect.

There are a ton of plain black drives out there from many manufacturers, but Seagate has the official partnership with CD Projekt RED to bring their collaboration with creator Mike Pondsmith’s Cyberpunk 2077 world to the real world.
I only have one complaint with this drive — the warranty. If you are in Australia, India, and China, you get a three year warranty. If you reside outside of the Americas, but not in those three countries I just mentioned (e.g. If you live in England, Africa, Russia, Greenland, Iceland) you get a two year warranty. If you live in North America or South America however, you get a whisper-thin one year limited warranty. While I can’t say I’ve had a failure of a Seagate drive inside of a five year period (and often far longer — I use them for my NAS, and often with tens of thousands of always-on cycles), I hate having to lean on Squaretrade to get that number to a more acceptable three year warranty. In terms of price, Seagate heard our feedback on their previous efforts which had a nearly $30 premium over their other drives. This one is right in the sweet spot, being just $10 over their similar capacity plain black drive. The difference here is that it comes with a thematically-perfect braided blue cable and LED light, and a downright fantastic aesthetic that shows they really put in the extra effort. 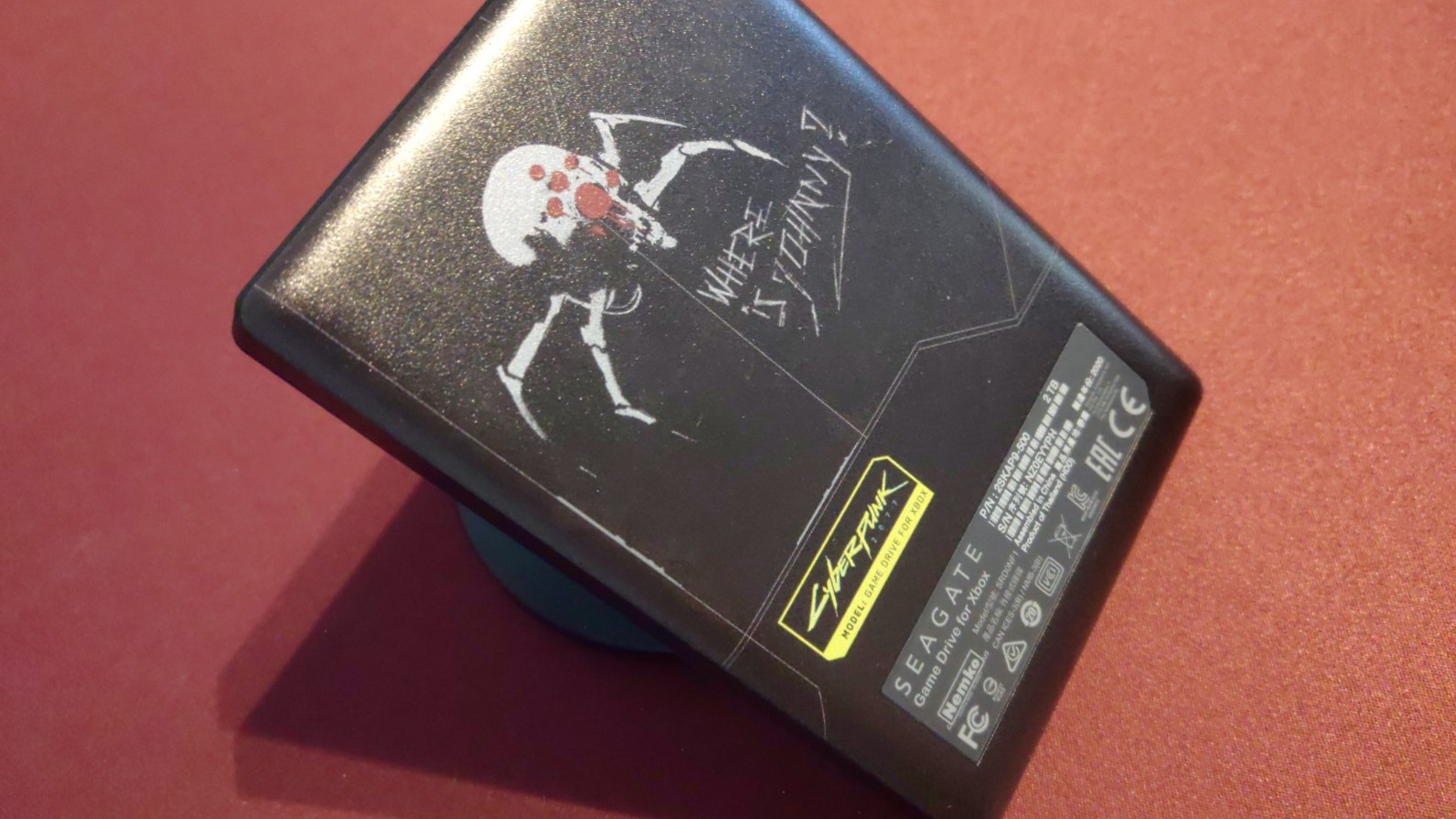 Seagate’s other themed drives all have one thing in common — they are smooth cases with their thematic artwork painted on. That’s not a knock against them — they look very cool, but this drive takes it up a notch. Looking like an old piece of industrial tech, the drive has texture to it, Down the right side is a mustard yellow grip plate with an insertion arrow, like this drive would be slotted into some machine in the Cyberpunk world. It has a serial number down the side and subdued Seagate lettering etched into the surface. On the left side is a shiny Xbox logo, with warning symbols and more thematic designators. The center looks like old blue metal with surface rust. In the left corner is the aforementioned blue LED that matches the cable when in use. Flipping the drive over reveals a yellow Cyberpunk 2077 logo, and above it is a skull-spider with the message “Where is Johnny?”. This drive’s look and feel certainly puts me in the right frame of mind to jack in and solve that question. 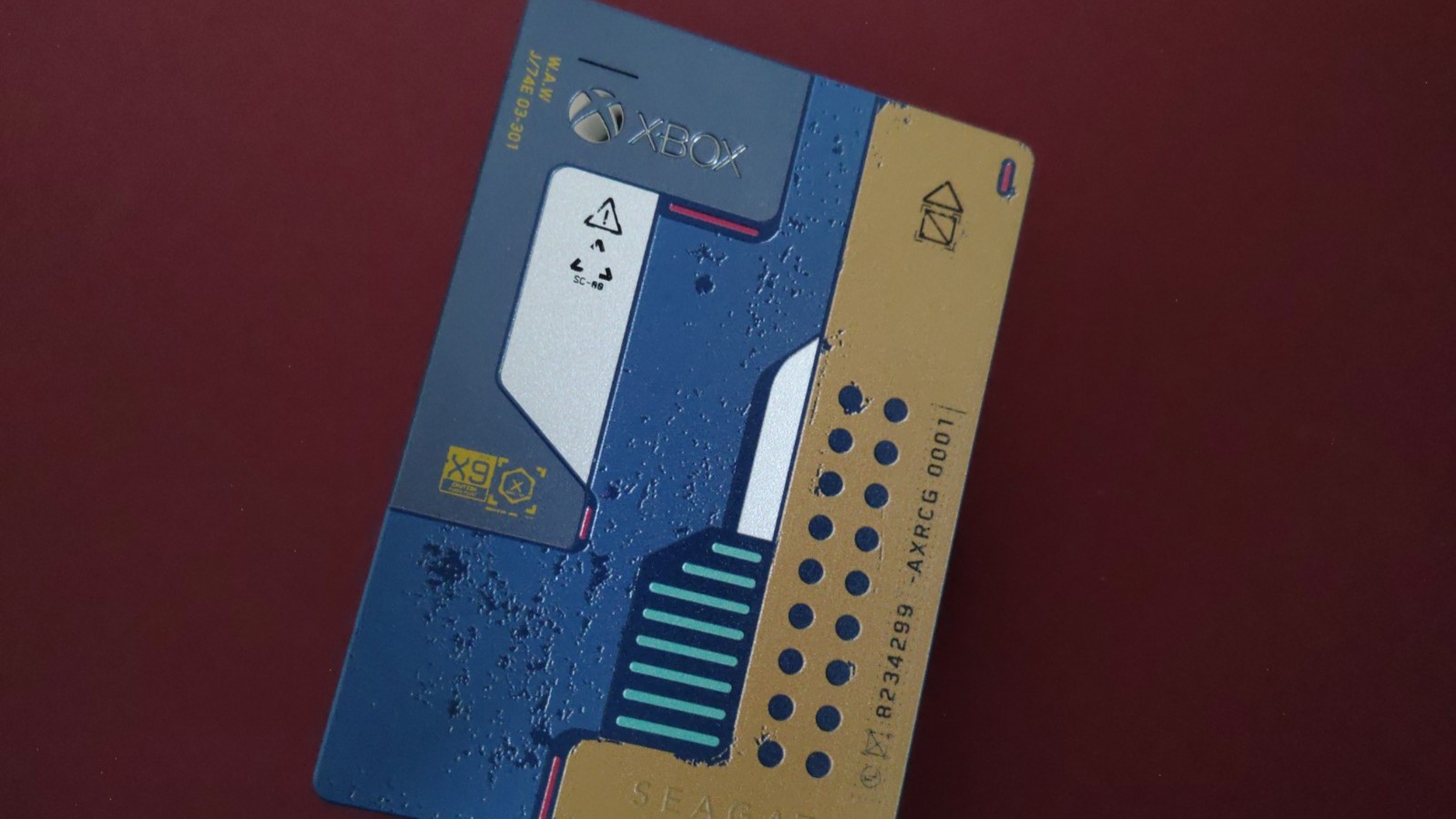 The faux patina on the drive is a pretty cool detail.

The Special Edition Gears 5 drives launched at $99.99 and $149.99 for the 2TB and 5TB editions, respectively. Here we see the price dropped a bit with the Cyberpunk 2077 drives landing at $89.99 (2TB) and $149.99 (5TB). Comparatively you can grab a plain black or white 2TB drive for $62 on Amazon as of this writing, but here’s something to keep in mind — the Gears 4 special edition drives will cost you $1199, and the Gears 5 drives are headed that direction. When I say “limited quantities”, I mean that these will be gone in the blink of an eye. Cyberpunk 2077 is one of the most anticipated games in recent memory, and this drive is going to be really hard to find almost immediately. If you want one, now is the time.

While SSDs offer a tremendous amount of speed, they often lack in capacity, and none have cool theming like this Cyberpunk 2077 drive. A true collector’s item, this extraordinarily consistent drive will sell out in the blink of an eye. While we have a little longer to wait for the game, don’t wait on this one.

Ron Burke is the Editor in Chief for Gaming Trend. Currently living in Fort Worth, Texas, Ron is an old-school gamer who enjoys CRPGs, action/adventure, platformers, music games, and has recently gotten into tabletop gaming. Ron is also a fourth degree black belt, with a Master's rank in Matsumura Seito Shōrin-ryū, Moo Duk Kwan Tang Soo Do, Universal Tang Soo Do Alliance, and International Tang Soo Do Federation. He also holds ranks in several other styles in his search to be a well-rounded fighter. Ron has been married to Gaming Trend Editor, Laura Burke, for 21 years. They have three dogs - Pazuzu (Irish Terrier), Atë, and Calliope (both Australian Kelpie/Pit Bull mixes).
Related Articles: Hardware, Seagate Cyberpunk 2077 hard drive
Share
Tweet
Share
Submit