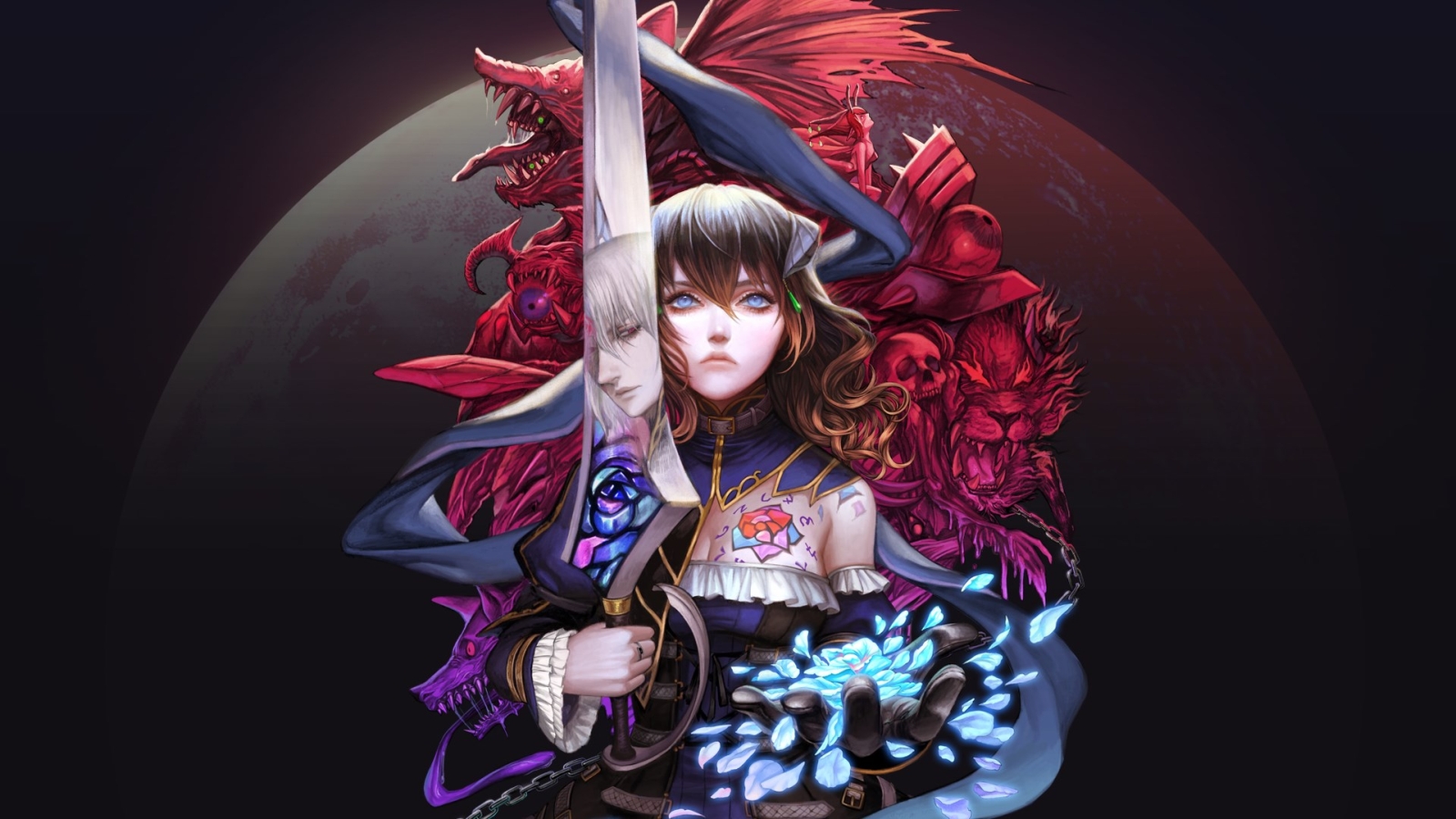 There are certain people in the industry that have created entire genres. Koji Igarashi (more often known simply as “Iga”) is the man responsible for bringing us the incredible classic vampire slaying platformer Castlevania: Symphony of the Night. Following Symphony, Igarashi worked on a number of Castlevania titles including Circle of the Moon, Harmony of Dissonance, Aria of Sorrow, Lament of Innocence, Dawn of Sorrow, Curse of Darkness, Portrait of Ruin, Order of Shadows, Order of Ecclesia, Judgement, Harmony of Despair and more. At this point, however, we saw MercurySteam step in and take the series in a fresh 3D direction and Iga saw Konami begin to turn their attention in a different direction. Disheartened, Iga left Konami, formed a completely new development company called ArtPlay, and took his passion to Kickstarter. It’s been a very long wait from 2015 to now, but without putting too fine a point on it, this may be the most satisfying non-Castlevania game in over a decade. Strap in for a love letter — let’s talk about Bloodstained: Ritual of the Night.

If you’re looking for a comparator, and you’re a longtime fan of Iga’s work, you’ll find that Bloodstained has the most in common with Order of Ecclesia, Portrait of Ruin, and of course, Symphony of the Night. Shortly after the start of the game you’ll immediately start to see familiar Iga elements. Attacking lanterns yields money and items, slaying monsters gives your character XP, and soon you’ll find a save point and a magical stained glass window that turns into a portal to teleport around the castle. Yep — while it’s not Dracula’s castle (or is it??), there is most assuredly a large labyrinthine medieval structure filled with beasts and bosses galore. As awesome as it is to see all of this in buttery smooth gorgeous 4K on the PC (which you can experience below), it’s the vastly expanded character development that will hook you in.

Before we dig in, I have to admit that I’ve been downright obsessed with this game since I loaded it on my PC. I looked up at the clock and found that I had ran four hours in a row on my first contact with the title. It’s rare that a game has me thinking about builds, boss battles, and new ways to use the crystals, but that’s exactly what’s going on here. Bloodstained is 100% pure addiction.

Your character, Miriam, is a Shardbearer. An orphan adopted by a group of Alchemists, she was subjected to horrible experiments culminating with a dark curse. Fusing magical crystals with her body, she awakened from a deep coma years later having no memory of what happened to her during these experiments. These crystals however did grant her incredible powers, and the ability to absorb additional crystals and the powers they contain. She also seems trained with a wide variety of weapons training, able to wield any weapon she comes across. As a result, a whip is far from the only tool you’ll be using here.

Progression in Bloodstained is a direct product of both grinding for gear and your own actions. As you explore the castle you’ll find bookshelves often containing Street Fighter-esque stick and button combos that unleash powerful attacks. Continue to use them and they’ll grow more powerful, doing additional damage and unleashing new powers. Additionally, you’ll find friends new and old ready to help you with your mission. 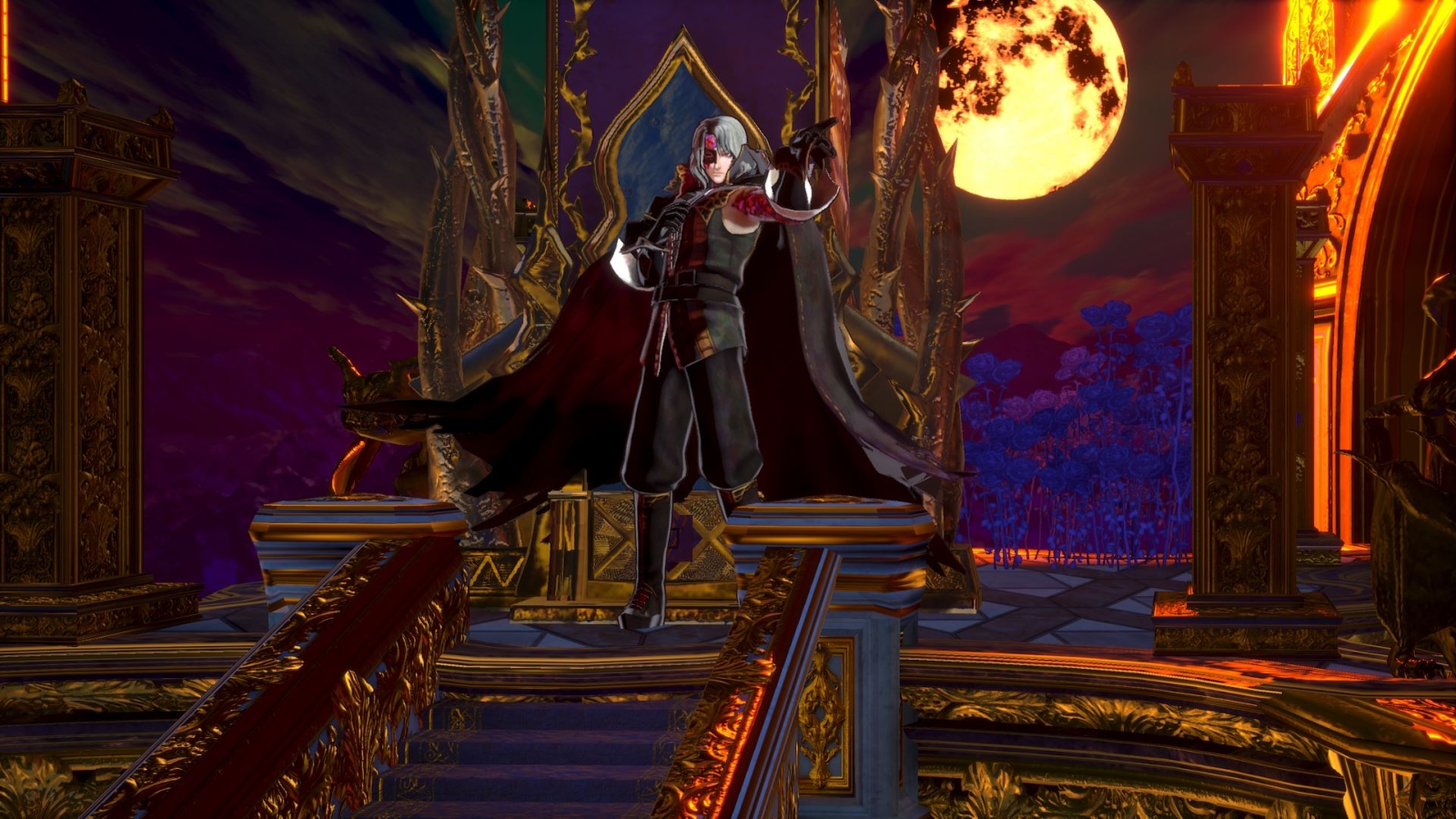 To help you rapidly switch between a wide variety of skills, you’ll find quickslot enablers that let you set up “favorites” including armor shards, and weapons, letting you move from soft armor and ranged attacks to close up claymores and steel cuirass at the press of a button and a selection wheel click.

As you combat creatures, you’ll eventually absorb a crystal shard. These shards can be assigned to six different slots, granting active, passive, and direct damage powers. There are shards that enhance your spellcraft, improve damage with specific weapons (there are a great many) and grant what can only be described as an obscene amount of powers. Killing rats eventually gets you a shard that lets you summon one of your own to unleash on your foes. Getting a shard from a knight that throws a massive axe let’s you use that same power. My personal favorite is one that summons a half dozen paintings that encircle Miriam spinning as a shield that does a tremendous amount of damage very quickly.

Upgrading your shards comes in two flavors – Rank and Grade. Rank is handled by Johannes, a friendly Alchemist in your home base, by giving him specific items. By way of example, enhancing the rank of the Katana Shard is accomplished by feeding it increasingly higher level katana swords. Grade is improved (providing faster attack speeds, higher damage, etc.) by simply collecting additional copies of the shards. Both cap out at level 9, so feel free to sell the incredibly valuable spares. 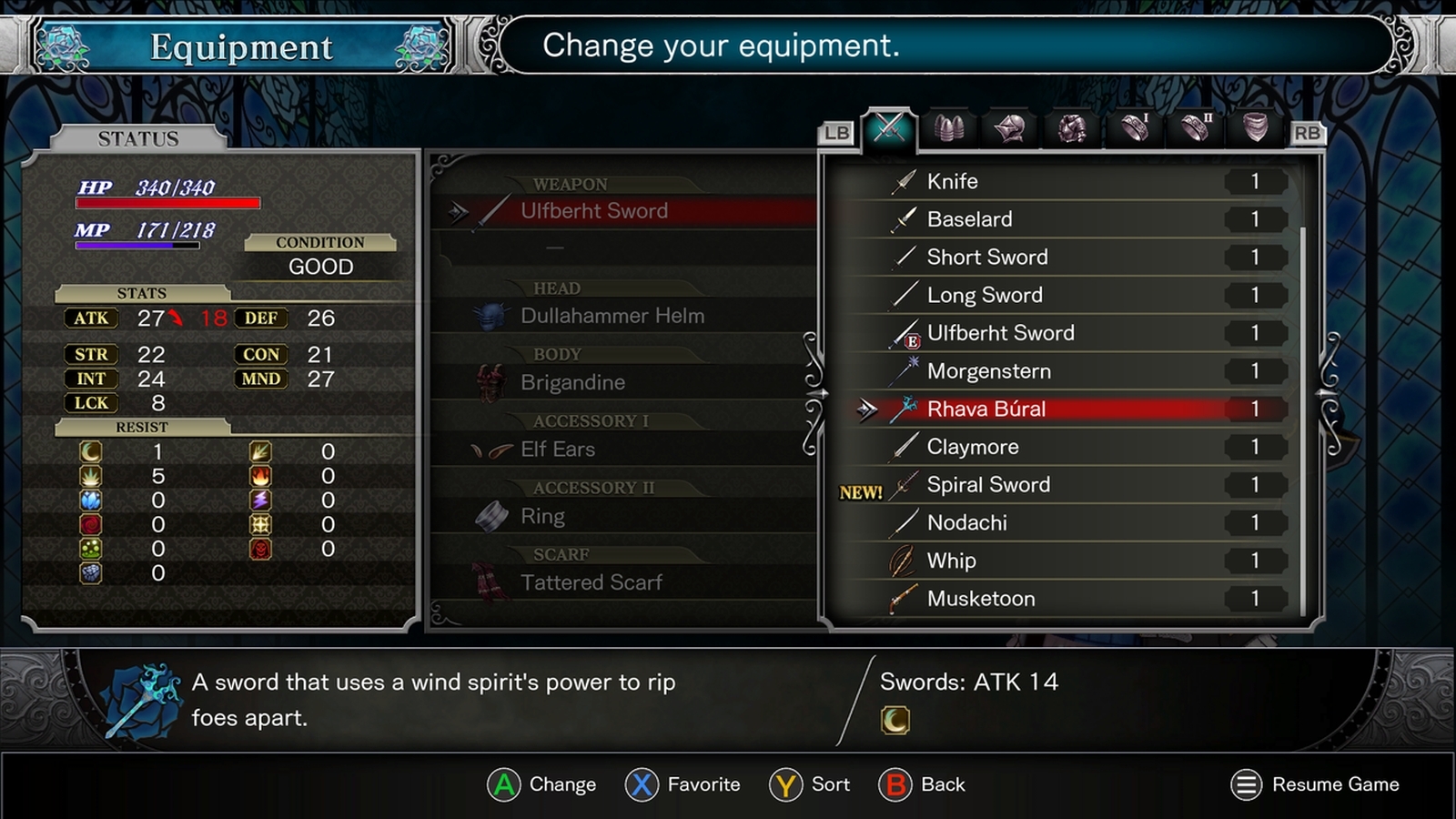 There is a plethora of equipment to match your play style.

Speaking of crafting, Johannes is also the area chef. Eating a dish for the first time grants Miriam a permanent bonus to her stats, so cook everything at least once. Collect enough of the random ingredients from your foes and you can create a sweet cheese pizza. These, along with potions you can brew, provide on-the-spot healing from the pause window.

Outside of the main quest to stop a fellow Shardbearer gone rogue, you can talk with a half-dozen characters who will ask you to avenge or honor their dead. Avenging means hunting down five of a specific beast and killing it for a reward. Honoring means coughing up valuable gear to a clergy member to bury with the dead. There’s even a forgetful little old lady who wants to eat your food, so everybody wants something from you.

I mentioned that there are quite a few weapons available in Bloodstained. Boots gives Miriam martial arts kicking skills to whip up on her foes. There are short and long swords, giant swords, katanas, rifles, pistols, axes, and naturally whips. Each has their own characteristics and attack arcs. You’ll likely end up picking a favorite and will stick with it until the end…but the end is only the beginning.

In about eight hours you’ll face off with the final boss. More than likely, it’ll catch you off guard and you’ll stumble into it on complete accident. With a short prologue I finished the game and got the “Game Over” screen. Surprised, I looked it up and found that I had just received the “bad ending”. This makes sense as I clearly hadn’t explored more than 30% of the castle, and there was a great deal more shards to collect. This leads to a secondary set of traits that unveils a whole lot more content. 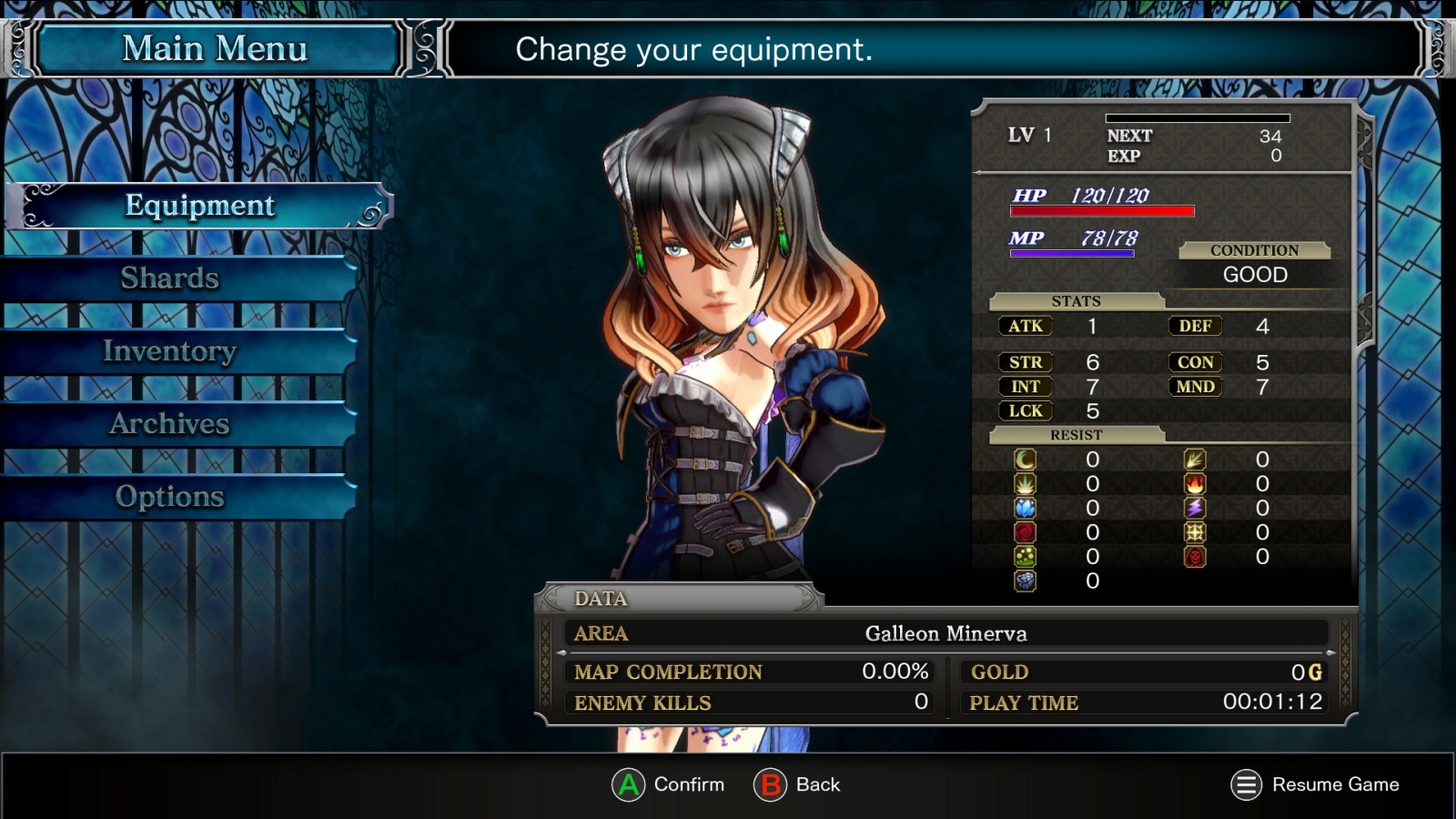 There are goofy cheat codes and plenty more after the game “ends”.

Like any of the latter Igvania games, and most effectively with Symphony, your character will get utilitarian powers that I won’t spoil here. These give you more locomotion options, as well as a fresh way to tackle foes. Maybe one of them can drain the blood pool with the obvious trapdoor? Maybe one of them can let you see where the lake under the bridge goes? Perhaps you can finally jump far enough to reach the distant box in the very first area? There are even a few locked doors with hidden keys that will keep you exploring for hours after the credits roll. To get the “bad ending” took me about 9 hours, but you’ll need to double that to get the “good ending”. Completionists will need somewhere to the tune of 24 hours of play to find everything Bloodstained has to offer.

Once you’ve beaten the game, you’ll find that you can continue from your last save, as well as unlocking the first of a dozen upcoming free bits of DLC — Boss Rush. Beyond smashing bosses, there is also speedrun, online and local co-op play, a roguelike mode, and multiple new playable characters. 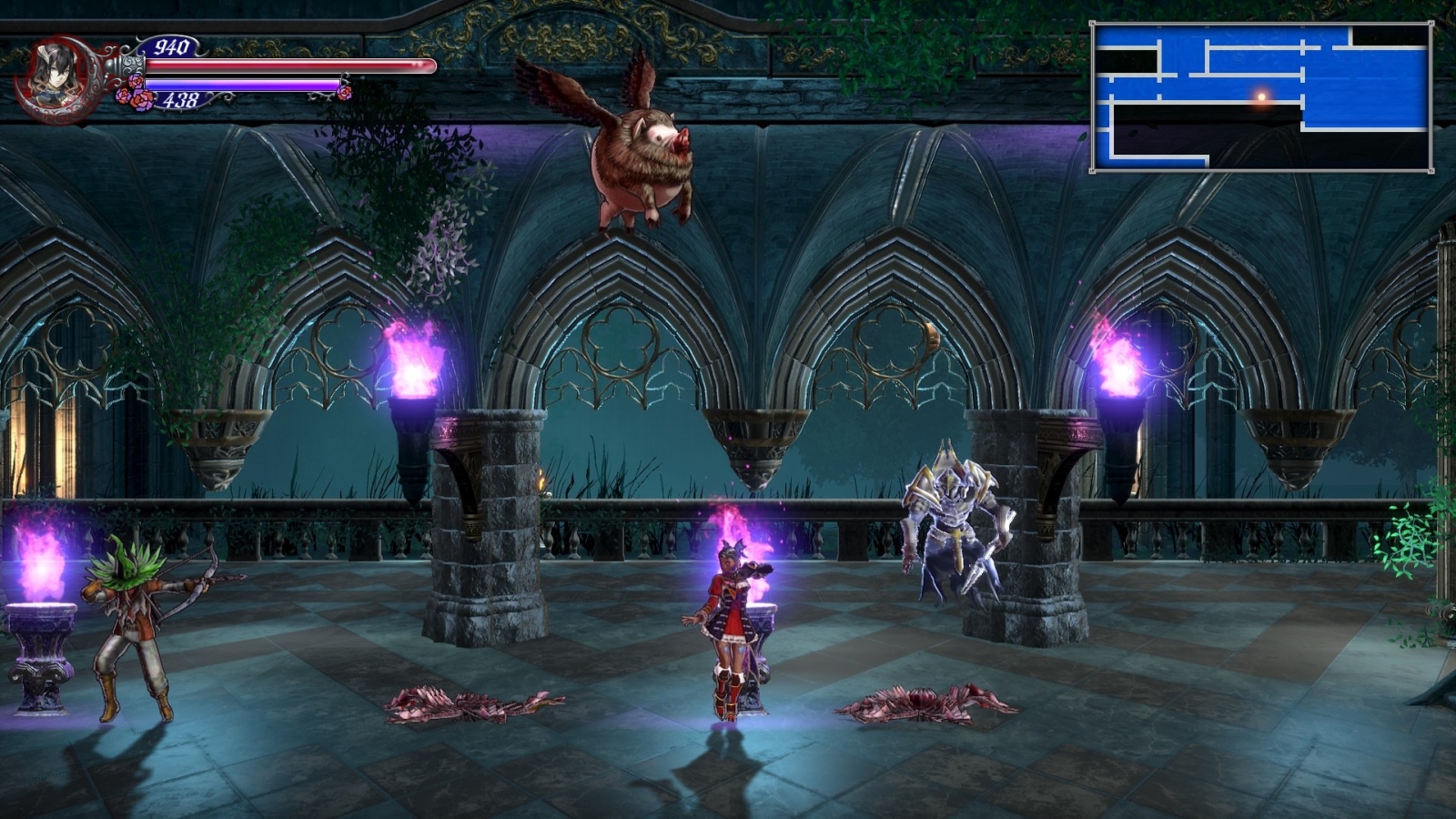 If you thought this game would never ship, here’s a flying pig to prove you wrong.

I’d be remiss if I didn’t mention just how fantastic the soundtrack for Bloodstained: Ritual of the Night really is. In point of fact, I’d gladly pay folding money to enjoy these offline. It has roots that stretch back to nearly every Castlevania game, and I found myself listening and hanging out in areas longer than I needed just to enjoy the tracks. Given that long-time Castlevania music master Michiru Yamane was at the reigns, it comes as no surprise.

While the soundtrack is amazing, it’s matched only by the gorgeous graphics in Bloodstained. The game presents as 2D, but it’s absolutely powered by a 3D engine. This gives the team a way to simulate parallax scrolling (the multiple backgrounds moving at different speeds to simulate depth) to maintain that old school cool. Additionally, it also provides ample opportunity for the developers to let you jump onto objects in the fore and background, as well as encircle a tower and other fantastic 3D elements while still maintaining the 2D look and feel. Beyond that, once you pick up a pair of concave glasses, the game whimsically zooms in slightly thanks to the spectacles and lets you see all these wonderful elements much more clearly. 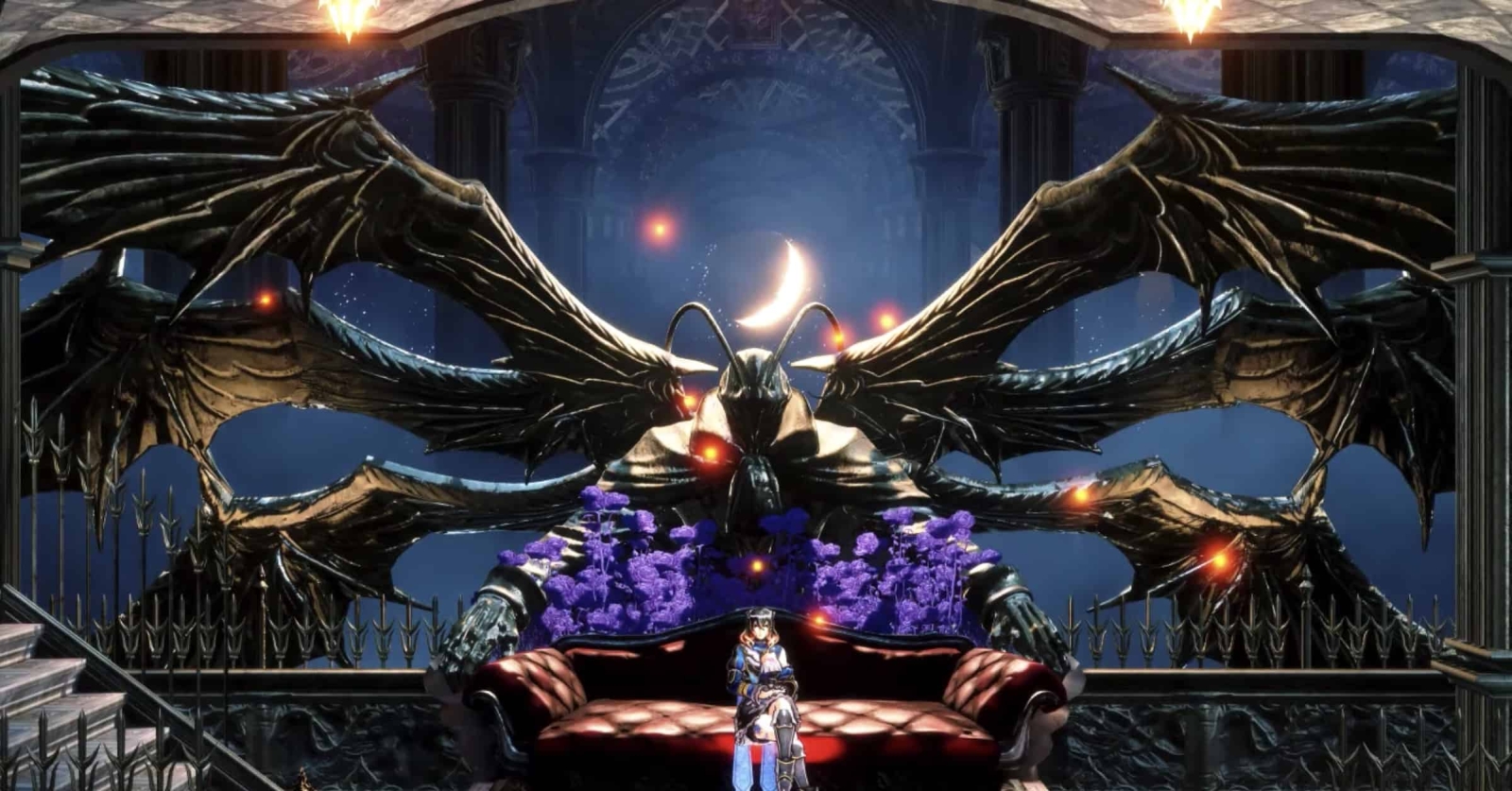 Sit a little while and enjoy!

While I’ve heard from my friends that they’ve encountered a few game-breaking bugs, pop-in, and framerate issues, I’m glad to say I experienced none of these things on the PC. Running the game on a 1080Ti gave the engine more than enough power to maintain an unwavering framerate, even at 4K resolution.

If I had a complaint, and it’s a very small one, it’s that the aforementioned painting summoning spell is vastly overpowered. Once I powered it up, it allowed me to obliterate bosses with impunity. It could damage the enemy far faster than I could swing my Katana, and my copious pool of mana let me destroy them with impunity. In fact, on normal difficulty, I only died against two of the bosses I encountered, or when I did something particularly dumb. Maybe I’m that good, but I’m kinda doubting it.

Bloodstained: Ritual of the Night

Ron Burke is the Editor in Chief for Gaming Trend. Currently living in Fort Worth, Texas, Ron is an old-school gamer who enjoys CRPGs, action/adventure, platformers, music games, and has recently gotten into tabletop gaming. Ron is also a fourth degree black belt, with a Master's rank in Matsumura Seito Shōrin-ryū, Moo Duk Kwan Tang Soo Do, Universal Tang Soo Do Alliance, and International Tang Soo Do Federation. He also holds ranks in several other styles in his search to be a well-rounded fighter. Ron has been married to Gaming Trend Editor, Laura Burke, for 21 years. They have three dogs - Pazuzu (Irish Terrier), Atë, and Calliope (both Australian Kelpie/Pit Bull mixes).
Related Articles: Bloodstained: Ritual of the Night, Let's Play
Share
Tweet
Share
Submit