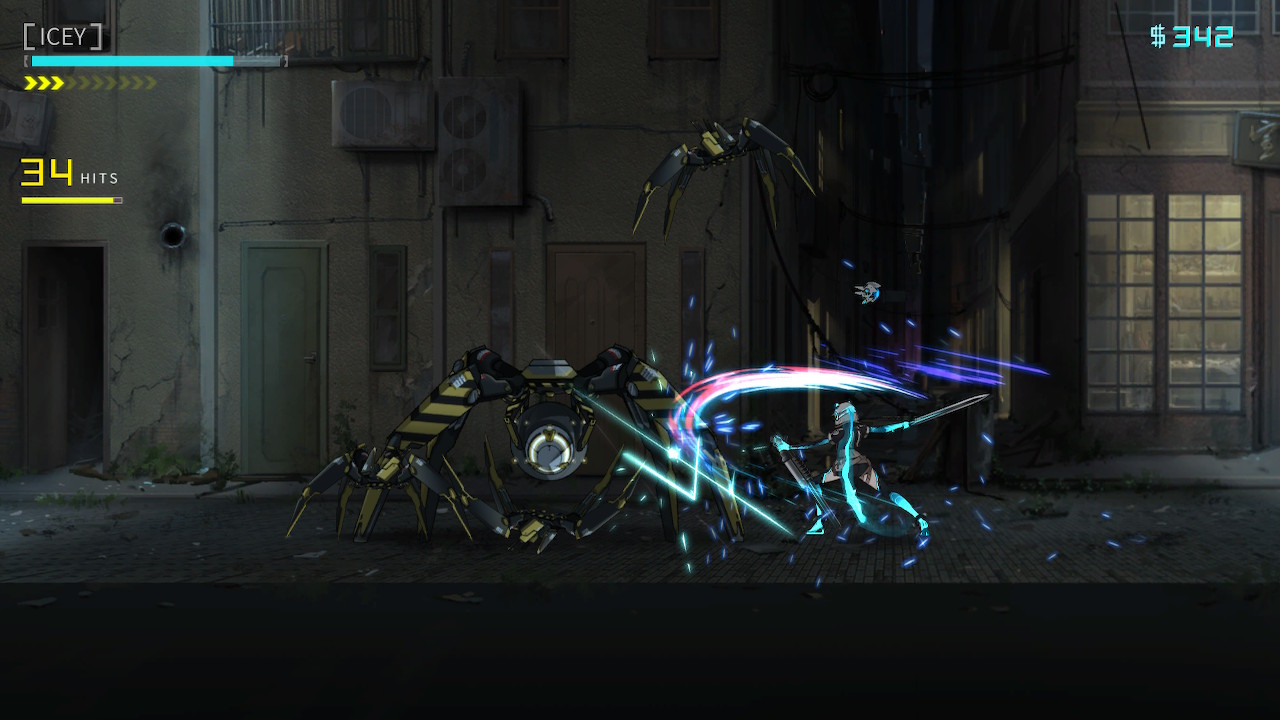 Most 2D side scrolling action games revolve around fighting and moving to the right, while following any arrows meant to point you in the right direction. Why do we blindly follow these arrows? What happens if we ignore them and head in other directions? ICEY takes these questions and makes them a part of the adventure.

The story begins with the narrator explaining that the villain Judas must be killed and that ICEY must be the one to do it. ICEY is floating in a cryogenic capsule and the game prompts you to press any button to continue. If you press nothing, the narrator comments that ICEY isn’t ready and the game soon ends. Don’t worry, the game loops back to this point and gives you the chance to continue as intended. This is just one of many instances where the game gets meta and breaks the 4th wall. Another early example is how the difficulty is set. The game reads your account info and asks if it is you playing, then asks about the importance of story compared to battles, along with a few similar questions before determining what difficulty setting fits your answers best. This is neat and I thought it was a fun little twist on the typical difficulty setting choice.

The gameplay is simplistic yet fun; it boils down to hack and slash combos, dashing, and jumping. The damage you inflict increases as your combo increases, so it incentivizes stringing attacks together. Dashing is primarily used for dodging enemies, and you can even dodge through enemies. If you time it right before getting hit by an attack, you get a short window of opportunity to perform a heavy counter by pressing A. Similarly, you use this same timing mechanic to perform a finisher after weakening an enemy. Once weakened enough, they will be stunned and have yellow rings surrounding them, which prompts you to hit the A button and eliminate that enemy. Some tougher enemies require more than one finisher to take them down, so be prepared.

In addition to a health bar, there’s also a shield meter to take into account. The shield reduces damage taken until the meter is depleted. When the meter is emptied, the shield breaks, stunning ICEY for a short time. After regaining her composure, ICEY can fight normally again, and the shield will slowly regenerate so long as you avoid taking damage. Health, on the other hand, can only be regained by killing enemies with a finisher. Defeating them this way causes ICEY to destroy their core and absorb that energy as health. The health obtained is a good amount, so if you fight carefully, you won’t be in danger of dying.

If you want to increase your odds of survival, there are upgrade stations scattered around the levels. You’ll need to use money collected from defeating enemies and breaking money blocks found in secret areas. Most of the upgrades are used for unlocking more combo moves and increasing the damage of said moves. You can also upgrade health, health regen from finishers, damage reduction, and more. There are some really good combos, so find which ones fit your playstyle best and make sure to buy them quickly. Besides combos, one other move that can come in handy is the fullscreen attack. After beating an enemy, they will drop energy shards, and you can hold down Y to absorb those shards. Upon releasing the button, every enemy on screen takes damage. It isn’t an ultimate move by any means, but it allows you to damage multiple targets at once.

What would a game like this be without bosses? The bosses are typically large robots that want to smash, blast, or crush you. The fights come down to slashing and dodging over and over. It’s repetitive, but that doesn’t take away from the fast-paced beatdowns. The bosses are by no means tough, they just do more damage and have more health than the fodder enemies. Their attacks are fairly easy to read, which makes forming a pattern of attack simple. These boss battles weren’t as engaging, but they will suffice those that want challenging enemies within the game.

There’s always been the debate of gameplay vs story being more important. For ICEY, the easy to pick up gameplay makes it easier for the story to shine through. It may be a little generic and uninteresting on the surface, but you’ll need to think for yourself to change that aspect. What I mean is this: the narrator gives you directions and arrows to follow, but there’s more to find if you choose to ignore them. The game is full of extra areas that you’d never come across if you only followed the arrows and plowed through the levels; these include rooms with money boxes as well as other rooms that offer more story.

The true charm of ICEY comes in the form of the narrator. He sounds so full of life, especially when you choose to disobey him. If he says to follow an arrow to the right, but you decide to go up and follow a different path, he will comment on it. Sometimes he claims you’re wasting your time, sometimes he gets mad, but my favorite situations are when he gets confused about your actions. I easily spent more time disregarding him and the arrows than moving forward. From going off on my own, I learned more about ICEY’s backstory, found a fabled deity, and got to experience many 4th wall breaks.

Plenty of the exploration leads you to situations which eventually bring you back to the main menu, but you are able to reload at any level you choose. There are in-game trophies that are connected to these situations, which provides another incentive to find them. The pure humor and creativity behind these encounters with the narrator are more than enough to warrant the extra time. Without spoiling how to trigger them, some examples include finding an unfinished level that you weren’t meant to enter, leading him to discuss the hardships of game design, and you can convince the narrator that you’re bored with the game, which leads him to toss you into a level of a different game. Every one of these encounters had me laughing and impressed at the same time. The 4th wall breaks definitely steal the show, and they encouraged me to keep intentionally going against his wishes.

ICEY is a typical 2D side-scrolling action game that contains more than you’d expect at first glance. The story and gameplay mix together well in order to provide an enjoyable experience. The combat is simple and fun, but the dialogue and 4th wall breaks shine brighter. There seems to be a robust metagame just underneath the surface of the game, and that is more than enough to make ICEY worth picking up.

ICEY is a fun 2D side-scroller with fast fluid gameplay. The story isn't the most revolutionary, but the narrator makes it interesting. Disobeying the narrator and the resulting encounters are funny, clever, and easily worth the time. If nothing else, the 4th wall breaks make ICEY what it is.

Codi loves to play video games and watch movies. He will watch almost any kind of movie just to experience them. His ideas take inspiration from the shows and movies he watches, and games he plays. He also loves a good pun.
Related Articles: ICEY
Share
Tweet
Share
Submit