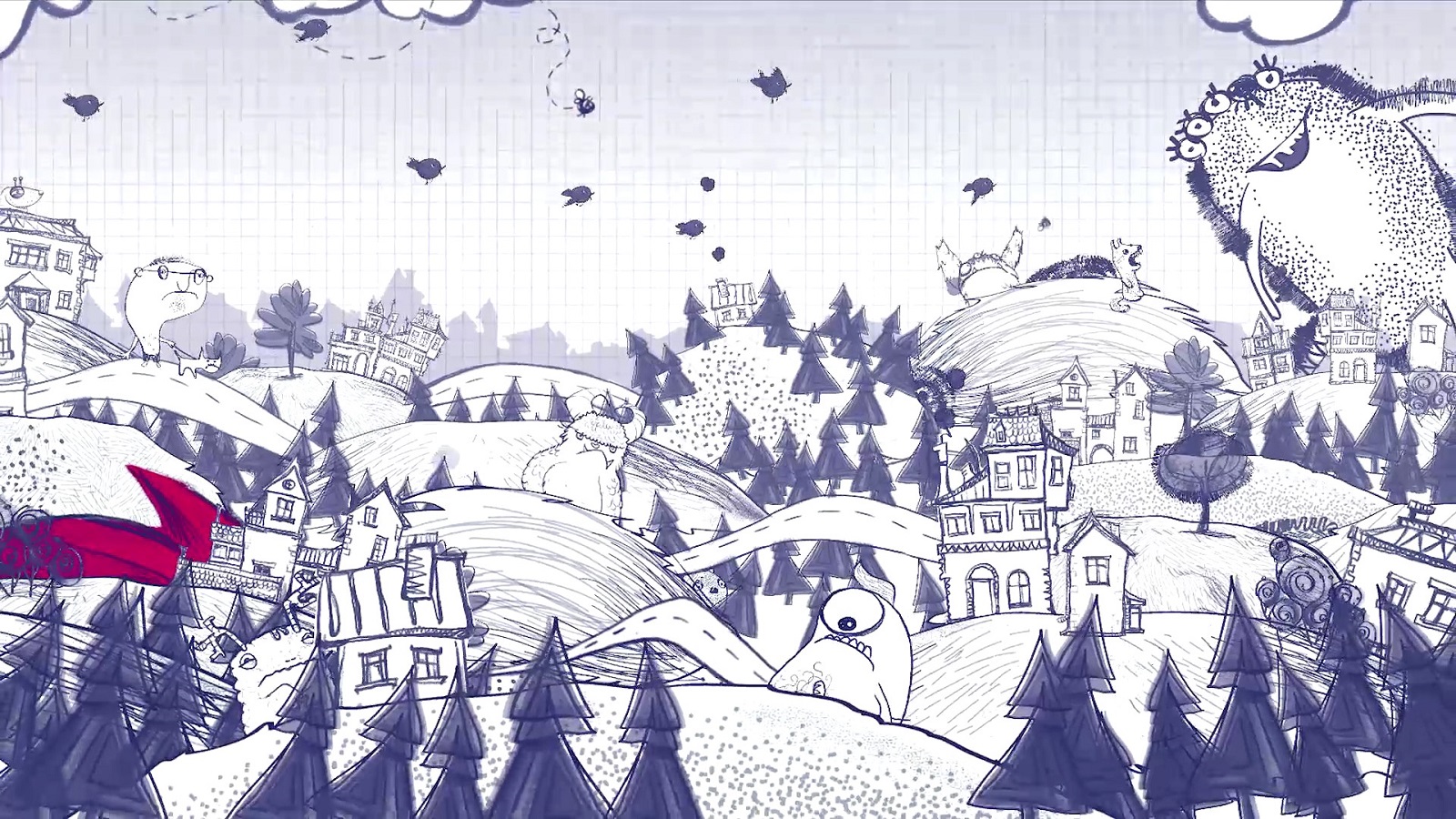 A pencil chewed up by an anxious adolescent, a beaten notebook opened to a (mostly) fresh page, and one uneventful lecture—the optimal conditions for every student’s favorite pastime: doodling. And much like the art of doodling, Escape Doodland is a buffet of randomness; no one knows where they’ll end up next, or what they’ll end up with, only that it’s just interesting enough to keep going. New studio flukyMachine’s 2D runner-style platformer is every bored student’s notebook come to life, proudly embracing its own eccentricities in the visuals department. But, turn the page and one will find that the gameplay lacks the same luster, living in the shadows of its influences. While it does sport more-than-serviceable gameplay, Escape Doodland is a game worth playing for its charm and simplicity, not for its depth of mechanics or level design prowess.

flukyMachine says “no” to the eerie, achromatic indie zeitgeist and politely refuses the call of the bloom-heavy, atmospheric experience, deciding that indie platformers need a dose of zany, feel-good fun instead. The trifecta of meticulously sloppy lines, mouth-made sound effects, and choice selections from Kevin Macleod’s music library remains the focal point of the game across all ten of its distinct levels. It’s also important to note that the visual and auditory flavors rarely conflict with the platforming. The music and sounds never distract, while backgrounds stay in the background. A handful of enemies and obstacles with either dull colours or weak outlines will, on occasion, fail to convey that they’re in the foreground, but it’s not nearly prevalent enough to tarnish the experience.

A quick synopsis of the story: the small Doodlers of Doodland are small, and the big Doodler-eating monster is big. What more did you need to know? The game is a short, replayable sprint away from a big, bad dragon-type colossus—but don’t worry, the Doodler runs automatically. All the player needs to focus on is the jumping, with a few extra abilities sprinkled in to add some spice. Timing and reflexes are the players’ most lethal weapons as they jump and weave through a myriad of enemies and obstacles in order to snatch the clear; there’s little room for error. Subsequent levels get faster, platforms get smaller, and obstacle placement becomes cleverer, but jumping remains the only ability one truly needs.

Scattered throughout each level are matches can be consumed for one of two abilities: the horizontal and vertical fart dashes. That’s right, because the game wasn’t wacky enough yet. Whenever the player finds themselves in a pinch, they can pop one of these get-out-of-jail-free cards for a quick save. A third ability, a toxic fart that works on a timer, temporarily stuns the monster pursuer and gives the player a chance to widen the gap between them and death. Understandably, fart abilities are essential for 100% bean collection (the game’s currency) in each level, but otherwise do not feel like ancillary features of the game. Especially in a game that advertises its high difficulty, giving the player what feels like an overwhelming amount of these lifelines waters down the challenge a great deal. It’s not uncommon for the player to completely ignore the abilities for a big chunk of the game, oftentimes just flat out forgetting that they even exist.

The UI is the other culprit for my fart-less running experience; important information is being displayed in the most inaccessible of places. The player’s Doodler takes its place at the center of the screen, and that’s where the player’s eye will be drawn to 99% of the time. There and just ahead of it, watching for oncoming obstacles and enemies trying to slow the Doodler down. As levels get more focus-intensive, it’s unreasonable to expect players to find even a spare second to look away from the action to check if their toxic fart is available or how many matches they have in stock.

Swimming to mountain climbing to sewer running—what’s next?

The levels themselves are undeniably fun. The white-knuckled intensity promised to players only appears briefly, but even so, running past strange sights and surviving against all odds is still gratifying.  Each level provides a few pockets of pure exhilaration that only perfectly timed jumps in quick succession can provide. Each level offers new hazards that players will have to learn to overcome, as well as a fresh setting to keep them on their toes. The levels are far from revolutionary, and platforming veterans are sure to have witnessed better level designs in games like Rayman, from which this game likely draws its influence. Placement of platforms never undergoes drastic changes, with each level containing moments that feel oddly similar to previous stages. With only ten levels in total, repetition is not something players want to find. It took an hour and a half to complete all ten levels. Still, it was enjoyable. Collecting beans and securing the three golden beans can keep players coming back, but that isn’t enough to solve the game’s content problem. A shop, where players can exchange beans for additional Doodlers and skill modifiers also helps to extend playtime, if only by a little longer.

“Hard” and “Harder” are the game’s two modes. The first is the default, which doesn’t quite live up to its name. The latter is essentially the first but stripped of checkpoints, meaning you only have one try to clear the entire level. Challenging, but not too interesting given that it’s the only other mode in the game. The only moment where I truly struggled was a swimming segment. In water, the Doodler sinks too slowly, meaning that players who aren’t already in an ideal position when certain obstacles are triggered will find that said obstacles are impossible to avoid. Whether that’s fair or not is up to the player, but at no other time did I feel pressure after hitting the retry button.

Game’s not as hard as advertised, but sometimes it’ll getcha good.

Escape Doodland is a game that can be easily recommended to someone looking to spice up an afternoon, but not one that fans of the platforming genre need to jump on. It’s a visual feast, but mechanically inferior to some of its more well-known contemporaries. Certain hiccups in the level design and UI could have been easily remedied, but it remains a solid, albeit short, platforming experience.

New studio flukyMachine’s 2D runner-style platformer is every bored student’s notebook come to life, proudly embracing its own eccentricities in the visuals department. But turn the page and one will find that the gameplay lacks the same luster, living in the shadows of its influences. While it does sport more-than-serviceable gameplay, Escape Doodland is a game worth playing for its charm and simplicity, not for its depth of mechanics or level design prowess.

A self-deprecating, overly sarcastic pair of glasses that occasionally possesses a human host in order to partake in the delightful process of playing video games, then immediately complaining about them. When he is not playing games (a rare occurrence), he can be found either writing about things that no one cares about, or haunting the quiet streets of his Canadian suburb.
Related Articles: Escape Doodland, Indies
Share
Tweet
Share
Submit