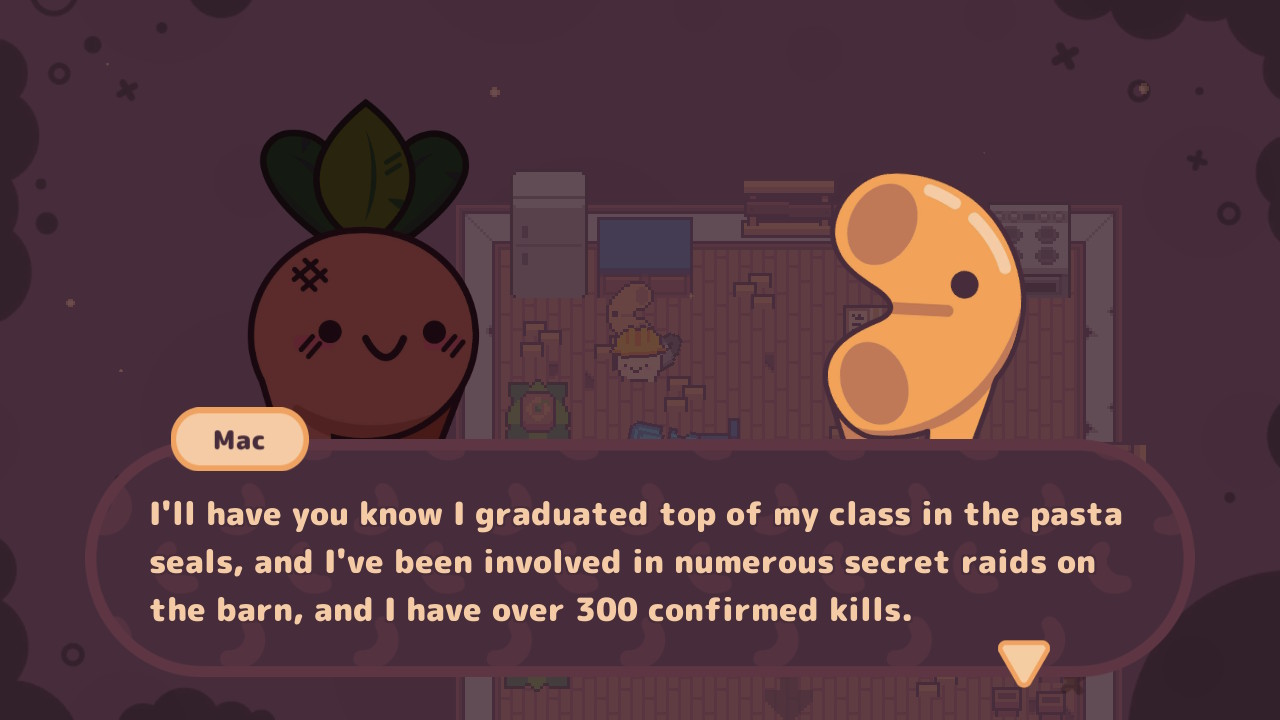 They say that you should never judge a book by its cover, but sometimes the title can raise some eyebrows in the most intriguing way possible. As someone working in the accounting industry, Turnip Boy Commits Tax Evasion scares me. As a reviewer? It’s a game that holds some great potential, even if it’s lost in its criminally short length. While it might be a bit too much for some, it’s still a wonderfully adorable game with some deceptively surreal humor. 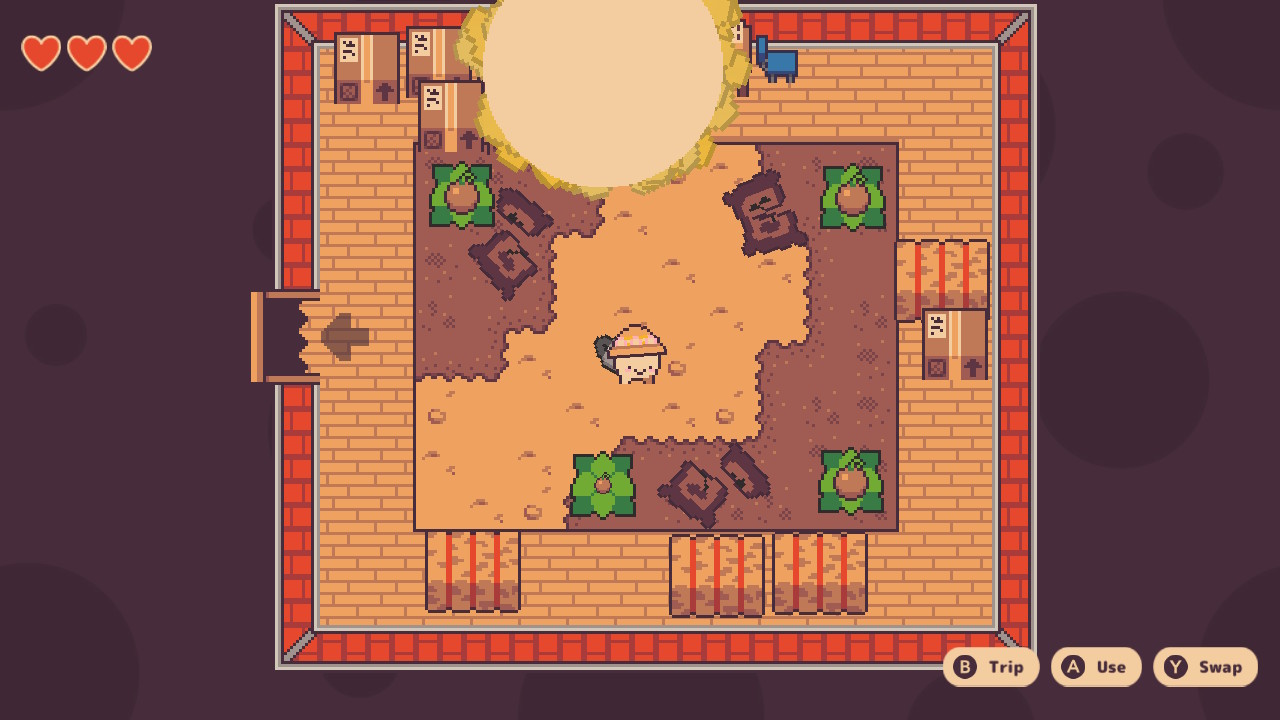 Oh no! Turnip Boy forgot to pay taxes and is now indebted to the totally-not-evil Mayor Onion! It’s up to you to guide our white-collar criminal to do the mayor’s bidding as you explore a world full of talking vegetables, sluggish foes, and… a nuclear holocaust? Right off the bat, the game has this creepy cute feel to it that starts to unravel near the halfway mark. It’s almost like Adventure Time in its narrative nature, with the lighthearted story giving way to some disturbing implications with its lore.

Meanwhile, the gameplay is serviceable, with it playing like a Metroidvania-lite. If anything, I’d probably compare it to Minit, where you have an overworld that you can explore, though you’ll have to follow the orders from Mayor Onion, which means you’ll be stuck on a set path for most of the game. There are different documents you can collect, which are promptly shredded by Turnip Boy. In this world, everything is forcing you to remember the sin of neglecting your property tax, so I understand why our little vegetable truant doesn’t want to be reminded. You can also get cosmetic hats by doing little sidequests for random NPCs.

Combat isn’t too advanced, with your main attack being a sword (later upgraded to a shovel) that has decent range and can be controlled with a button press or the right analog stick. However, I thought that the other tools you acquired were rather innovative. You get a watering can early in the game which can water things like bombs which you can push into enemies or boxes, and even portals that function like… Portal portals, which results in some rather smart block puzzles. The game gives you a lot with a little, and while most boss battles boil down to “attack when you find an opening”, there’s enough with the other mechanics that make the battles feel fresh. 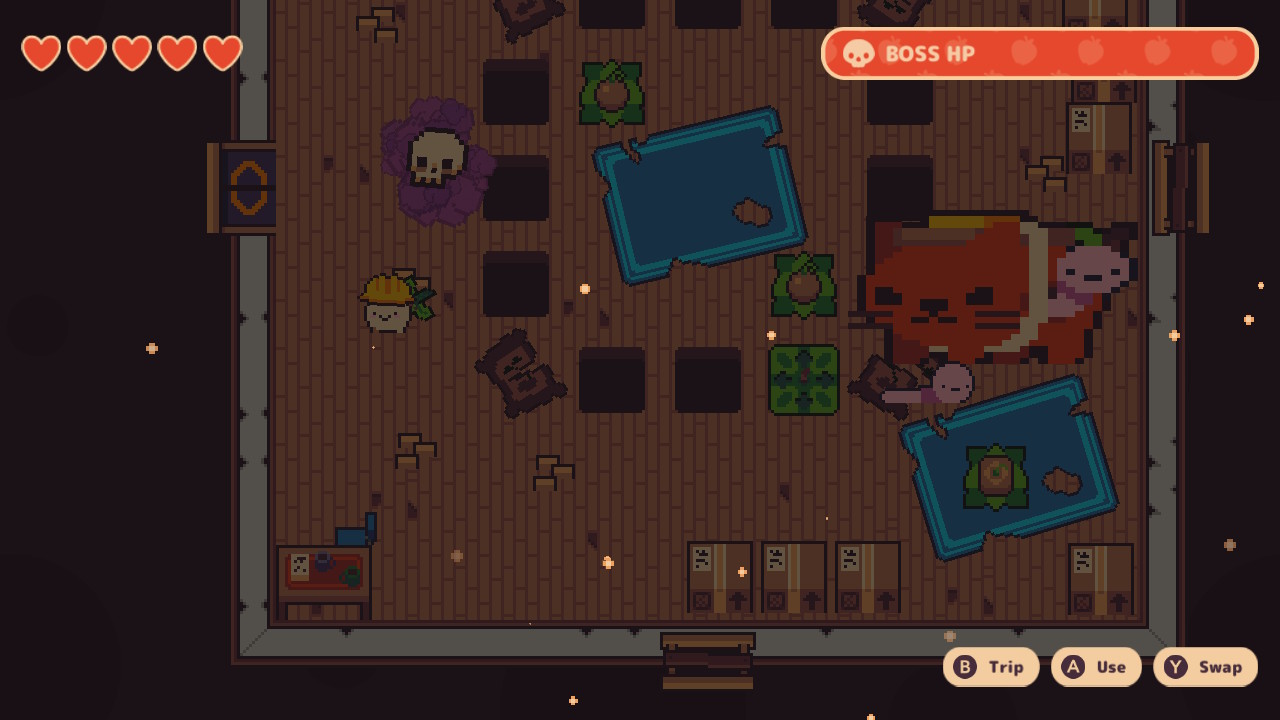 Unfortunately, aside from the final two boss battles, the whole game feels a bit too easy which makes the short length a bit more noticeable (I’ll touch upon this later). I do appreciate the developers trying to make the game more accessible to everyone (even including an invincibility mode and the option to make your sword/shovel attack stronger), but I wish it was a bit more challenging and matched the level of the final two bosses. They were fun and innovative fights that actually had me die a couple of times.

The graphics are perfect for this game, as the pixel art complements the wacky story and cast of characters well. The game does sport some visual novel dialogues when interacting with NPCs, and they are hilarious. There are tons of references to pop culture and memes, which works well in this zany world. 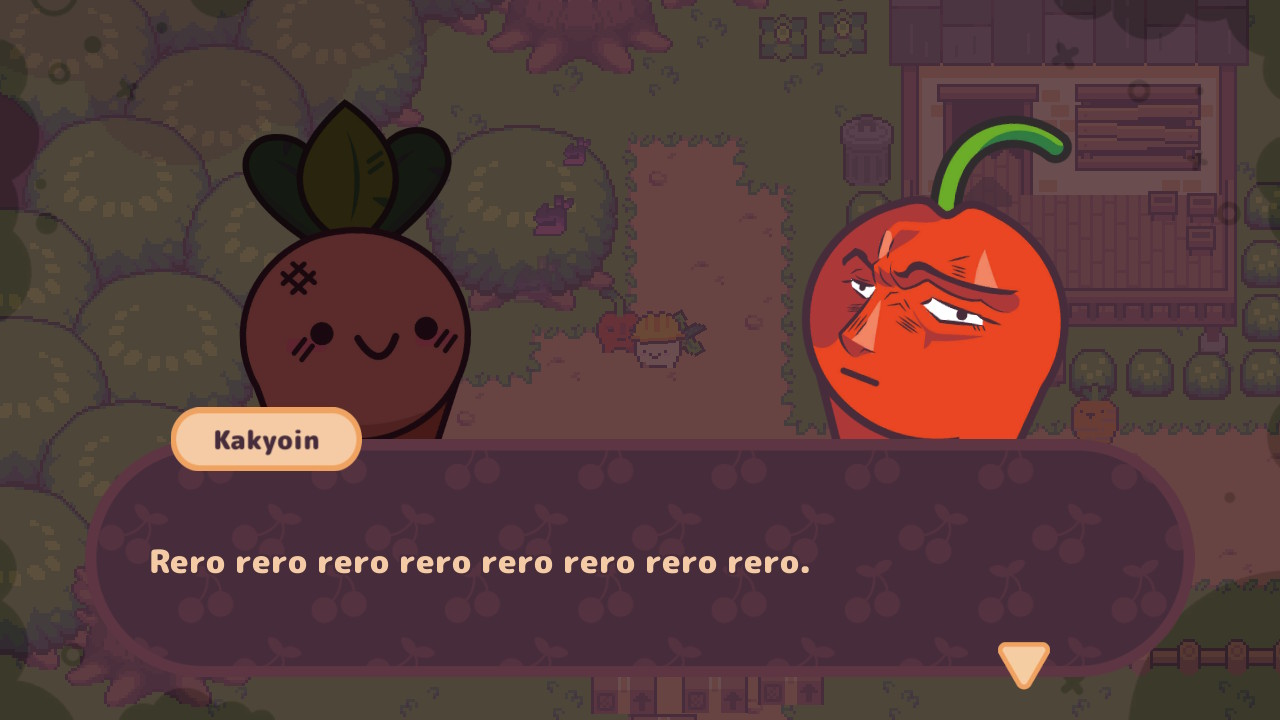 That said, I would also want to compare the game to Minit with its length, albeit negatively. While there are quite a few sidequests you can partake in, the game is under two hours long, even with 100% competition. This isn’t normally a bad thing, but with Minit, the game felt bite-sized but had a perfect three-hour runtime. Here, there’s a lot more that the game could explore and it just… doesn’t. It’s like it was waiting for a sequel to tie up the loose ends, which is fine but I would much rather see the game fleshed out to its fullest before that happens. 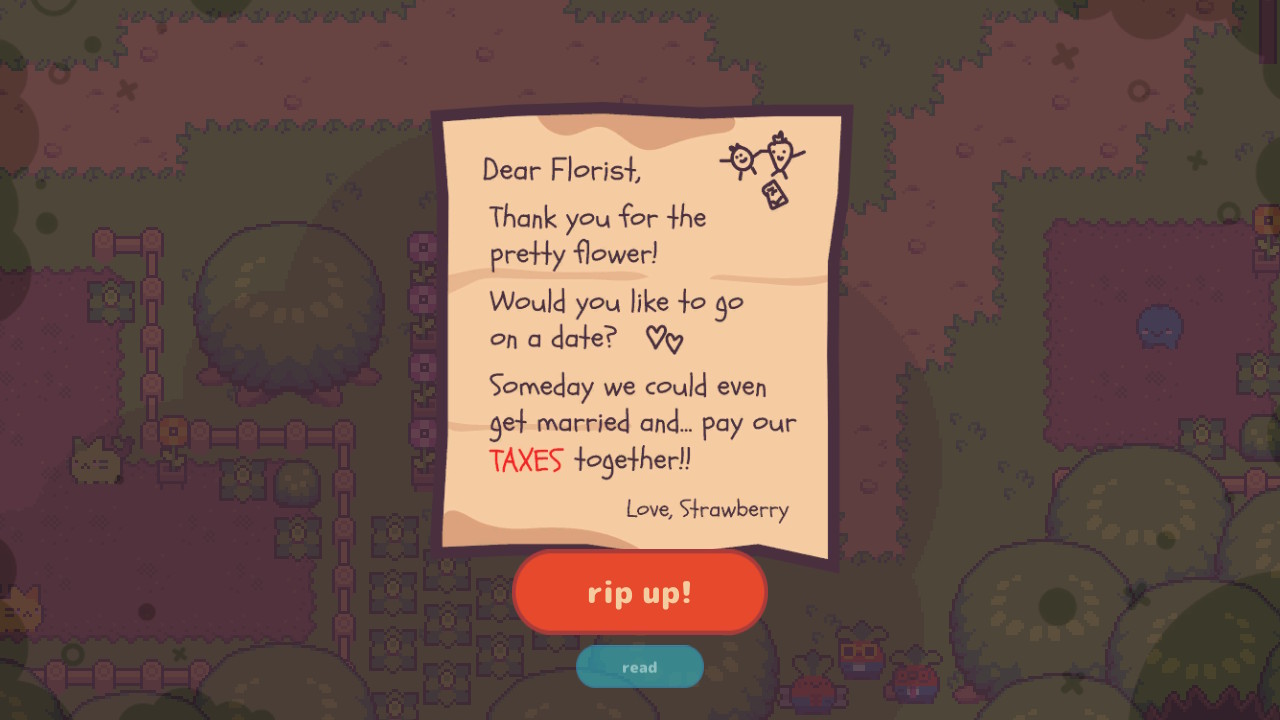 As a result, most of the mechanics are underutilized and a lot of the lore goes up in the air of speculation. There are a ton of different cliffhangers that don’t get answered, and I hope that the game gets expanded to address them. This is a game I would totally recommend, but at a price tag of $14.99, it’s a tough sell at full price (again, compared to Minit with its SRP of $9.99).

Turnip Boy Commits Tax Evasion is a cute little game that’s over way too quickly. While this means that a lot of its questions aren’t answered and its mechanics are underutilized, what’s here is still a very enjoyable ride with an adorable protagonist (that may need a calculator or two).

Elisha Deogracias is an aspiring accountant by day, freelance writer by night. Before writing for Gaming Trend, he had a small gig on the now defunct Examiner. When not being a third wheel with his best friends on dates or yearning for some closure on Pushing Daisies, he's busy catching up on shonen manga and wacky rhythm games. Mains R.O.B. in Smash. Still doesn't know if he's a kid or a squid.
Related Articles: Indies, Turnip Boy Commits Tax Evasion
Share
Tweet
Share
Submit