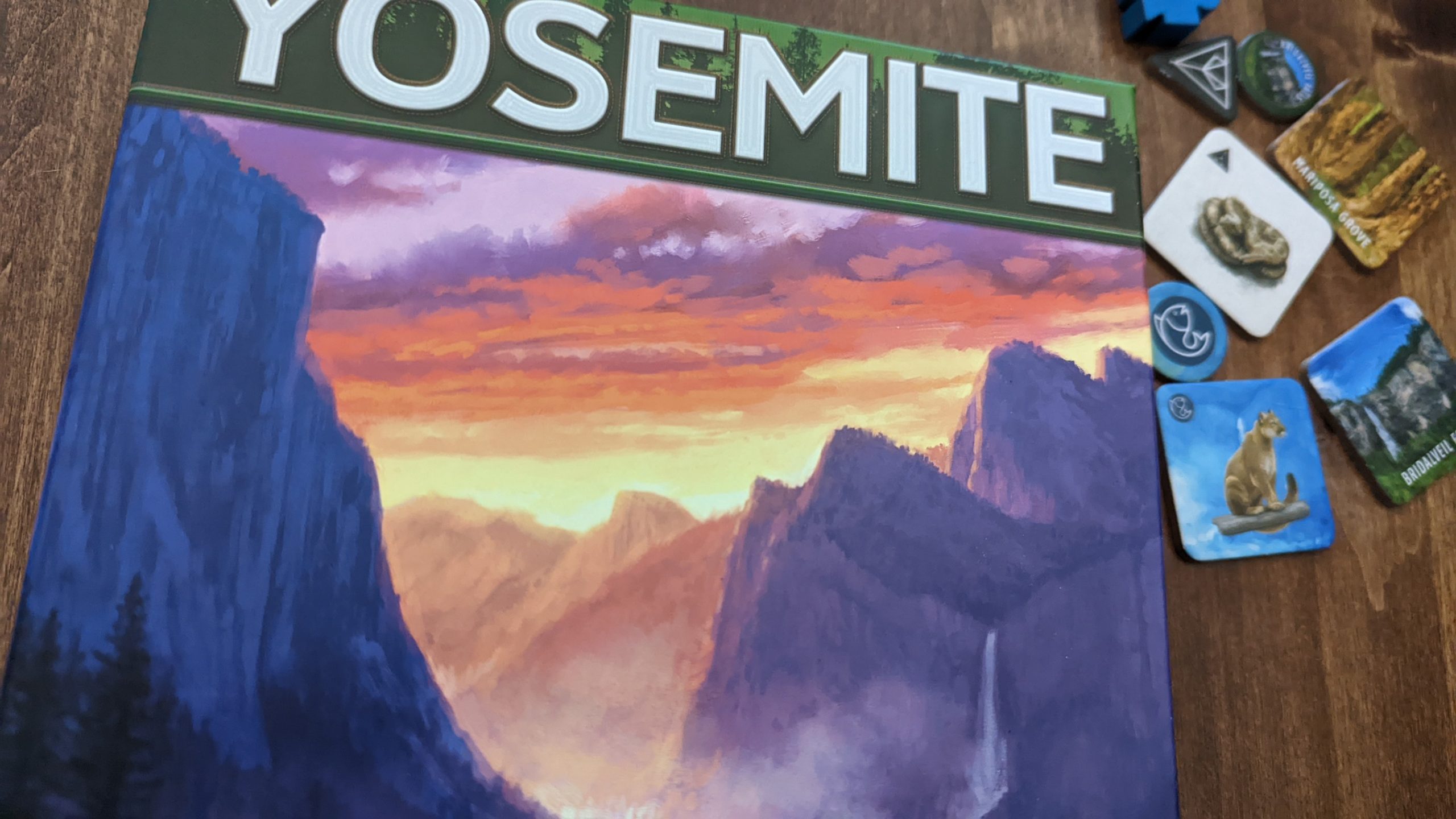 Back in my Space Station Phoenix review, I patted myself on the back for being more discerning about what winds up in my collection. Confession time, that was a bit of a lie, cause my 2-player shelf is constantly expanding, to the point that I should probably start calling it my 2-player shelves. This is mostly because, as I Increasingly find myself being an ambassador of the hobby, I want to be able to put the perfect game in front of any particular person. War of the Ring is awesome, but it’s an absolute beast, both in overabundance of rules and time demand, so it really shows its age. I love Memoir ’44, but you have to be able to accept a lot of randomness and luck to enjoy it to the fullest. I could go on, but this isn’t a review of my favorite 2-player games before I played Yosemite,  this is a review of Yosemite, and I’ve already found room on my shelves for it.

Nominally, players are wildlife photographers duking it out in the titular park, but the gameplay itself is rather abstract. However, if you’re willing to put the thin-theming aside, Yosemite’s mechanics have made it one of my favorite two-player games.

The player’s turns can be separated into three phases. First, they can spend any number of fishes to move their photographer meeple that many tiles on the game’s 5×5 grid, and then they either move one tile and gather one fish or resolve the tile that they are on. Normally, this will be an animal tile, which requires movement unique to that animal, picking up the tile, and resolving the tiles bonus. Animal tiles have one of three bonuses- the relatively simple fishing bonus which simply gives the player another fish, the camping bonus which sees players involved in a tug of war on the camping track that provides bonus points at the end of the game to the player who was most successful in this tug of war, or finally the photography bonus, which gives the players the option to turn in animal tiles that they had previously acquired to pick up one of the two available picture cards. The final part of players turns has them replacing the tile that they had picked up, potentially revealing one of the landmark tiles that is added after the initial setup, and these tiles are the real lynchpin to what makes Yosemite as good as it is. When they are added to the grid, landmark tiles are seeded with their respective tokens, which players can spend their turn on picking up, essentially turning that tile into a dead tile for the rest of the game. While the bonus tokens provide significant end-game scoring opportunities, the really interesting thing about landmarks is how they essentially become traps that you can maneuver your opponent onto, which makes maintaining a good stock of fish to avoid losing a turn important. 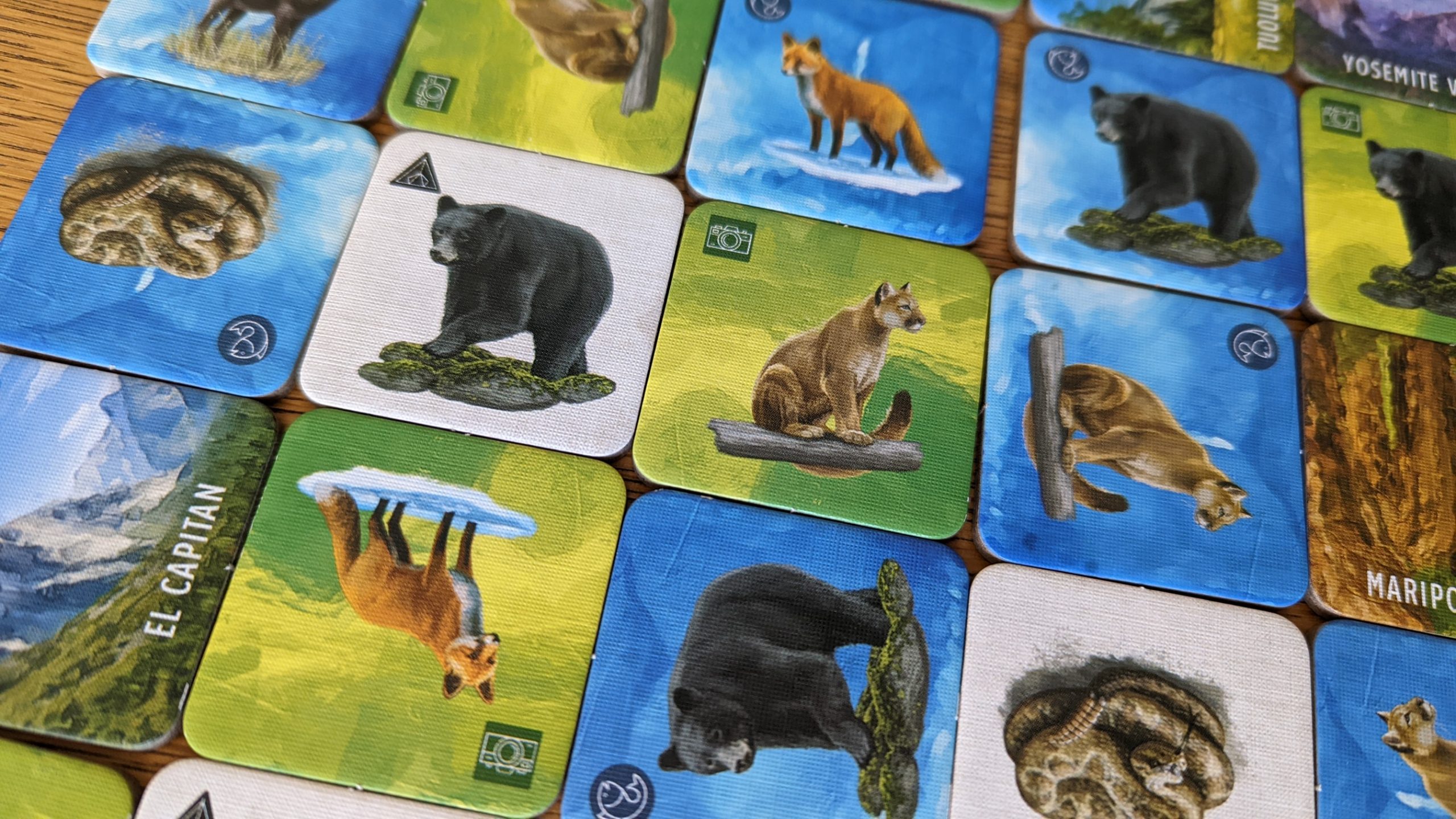 You can tell Yosemite is a tight design, because I have a really hard time putting my finger on one mechanic that is doing the heavy lifting. Landmarks are definitely the flashy one, offering huge chunks of points to make the risk of lost turns worth it, but the judge cards are Yosemite’s stagehands, quietly working in the background, simultaneously giving players a clear goal while also ensuring that different plays will have very different feels.  During setup, that game’s two-judge cards are revealed,  indicating the animals that will score players four extra points if they have more than their opponents between their photos and leftover tiles in hand. The abilities of the judge animals set the tone for that game, where low-movement animals that can move the other player like snakes and bears tend to see the players sticking close to each other for much of the game, but foxes and rams incentivize players to give each other space unless they’re setting up to fight over an important landmark.

Yosemite’s masterstroke is how it successfully balances interaction and avoids feel-bad moments. Everything in this game is a direct competition, so if your opponent pulls a particularly good move that wrecks your plans, chances are, you have no one to blame but yourself. Even getting stuck on an empty landmark and effectively losing a turn only happens if you let yourself go fish bankrupt. 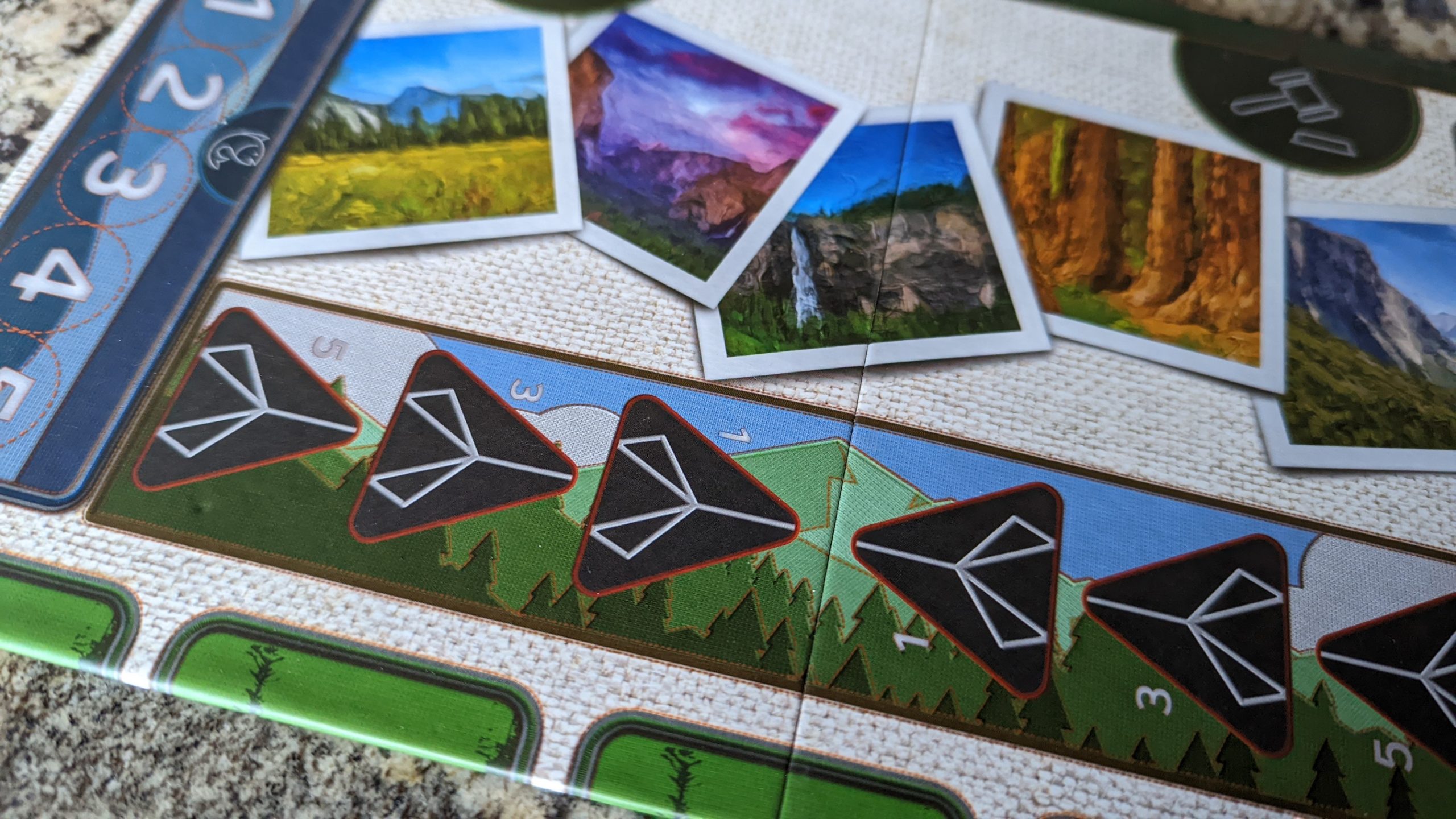 If I had to lodge a complaint with WizKids over a Yosemite, it would be over the visual design for animal movement. They’re easy enough to remember, and there’s a legend on the back of the rulebook, but with the amount of empty space on the tiles and the space-filler pictures on the game’s board, there is plenty of space to have reminders somewhere that’s already within players’ field of vision, preventing the need for more forgetful people to consistently check the rulebook.

Setting aside my minor quibble, I can't help but love Yosemite. Between the nice production of the thick linen-finished tiles, and the simple rules that allow complex decisions, this box is solid gold.

Nick grew up reading fantasy novels and board game rules for fun, so he accepted he was a dork at an early age. When he's not busy researching the intricacies of a hobby he'll never pick up, Nick can be caught attempting to either cook an edible meal or befriend local crows.
Related Articles: Tabletop, Yosemite
Share
Tweet
Share
Submit