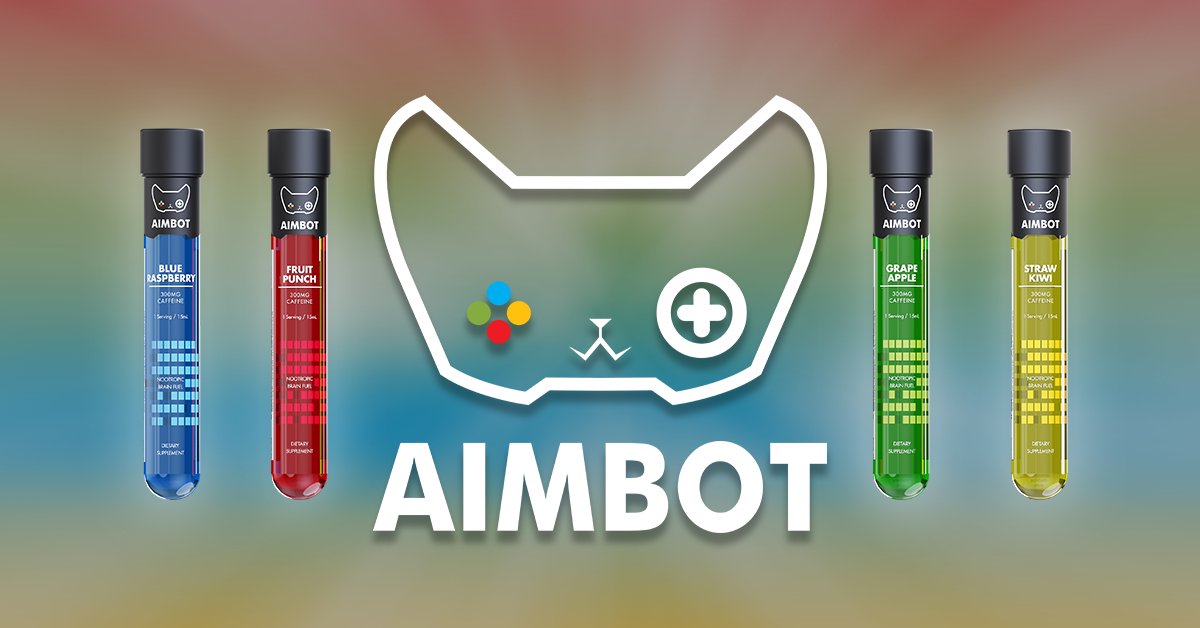 When it comes to sodas and energy drinks, I like to try everything. Yeah, I go in knowing things are probably going to tear up my stomach, but it’s worth it to see how they taste and the energy boost provided. I’ve been through my fair share of drinks promising to give me the energy to make it through the day, and so far the only things to crack open my eyelids have been Mountain Dew’s Game Fuel and Red Bull. I’m probably a bit immune to the effects of lower doses at this point, so when I saw an ad for a product called Aimbot Energy that contained a ridiculously high caffeine formula, I had to give it a try.

So let’s just start out with the facts, this stuff just looks fly. The box looks awesome, with the creative use of the upside down controller logo made to look like an animal (a cat in my opinion). Each shot is contained in a vial, which just looks cool even if that seems to be a bit of the rage right now. Presentation is almost as important as the product itself, and if it catches your eye in the store you’re more likely to give something a try. Aimbot Energy has definitely done their due diligence here, and it’s appreciated.

Now, theatrics for the sake of theatrics are great, but you don’t buy these to look at- you do it to drink them! I’ve tried each one multiple times, and have quite a few thoughts on each flavor, as well as their effects. First though, let’s go into a science lesson on what’s inside each vial. Right off the bat you’re going to see 300mg of caffeine in each dose, and believe me it’s more than enough. Aimbot recommends not to drink more than one of these a day, and with that much caffeine I don’t suggest going any further myself. They also advertise a blend of nootropics, otherwise known as stuff that makes you think and react faster. These are compounds that you see all the time in energy drinks, and Aimbot has plenty of them.

Aimbot contains L-Theanine, Alpha GPC, L-Citrulline, ALCAR, 5-HTP, Taurine, and finally is sweetened with a custom blend of sucralose and stevia. Those are a lot of fancy words saying this formula is loaded with stuff to help you focus while depending on calories and carbs which generally will cause a crash. It also works well for those who are more fitness or diet concerned, so that one of these won’t be cheating and counts more as a supplement.

So, what does this combination taste like? In a few words, strong. Like many energy shots (Five Hour Energy in particular), Aimbot can have that medicine-like aftertaste. While the formula as a whole is strong in concentrate form however, the aftertaste isn’t nearly as bad as a Five Hour Energy shot, and can be combined into water so that taste largely disappears. Not every energy shot can work well that way, but I found Aimbot to be at it’s best when mixed with a 16oz bottle of water. The sugar substitute also works better than many formulas (even ones like G-Fuel), and doesn’t have a fake sweet taste. You can drink it raw, but you better be ready for a shiver to go through your entire body, as it has a powerfully sour taste. 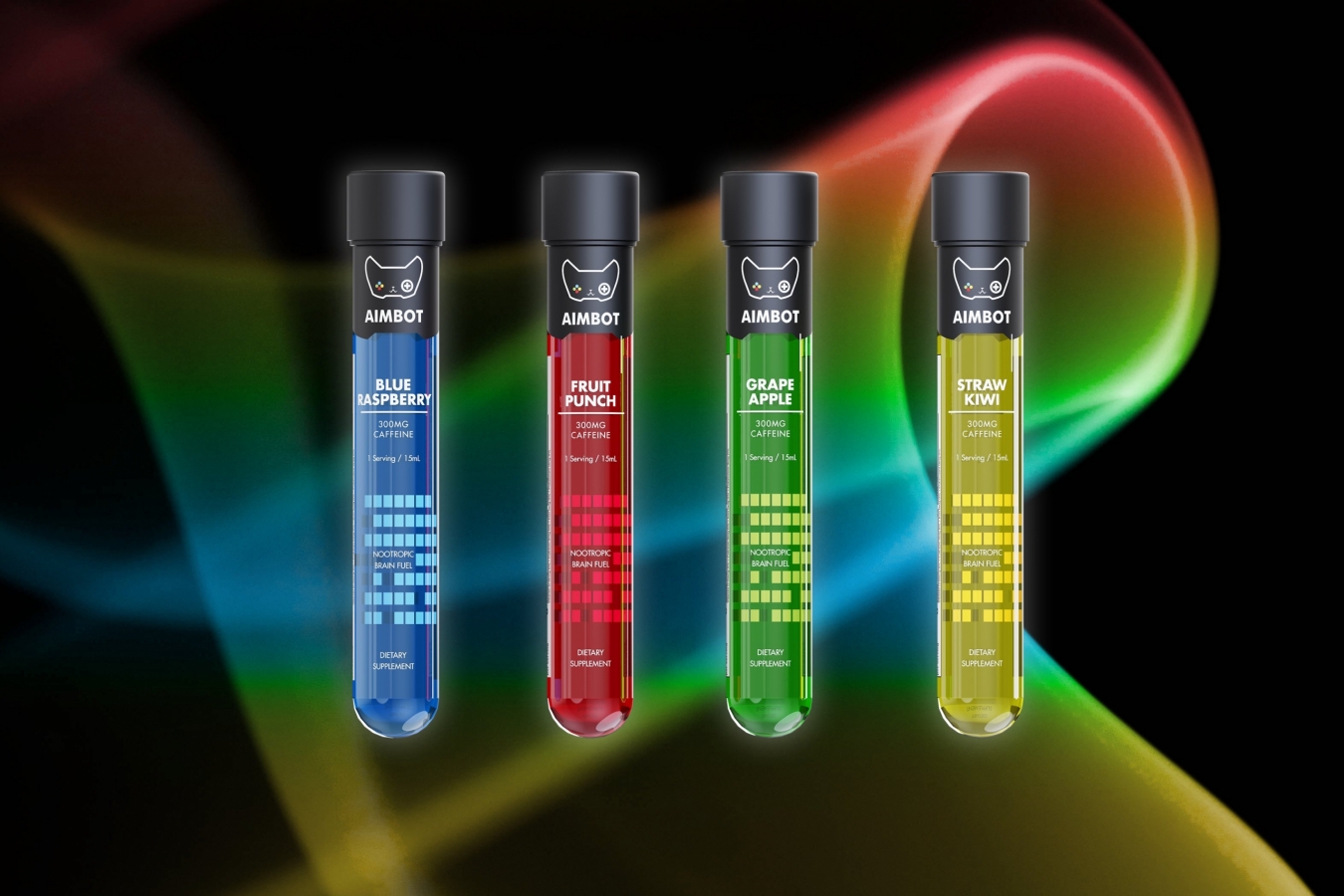 There are four flavors currently available, Blueberry Raspberry, Straw Kiwi, Grape Apple, and Fruit Punch. Each is largely what you would expect them to taste like, but I was a little bit surprised at what my favorites ended up being. I’m a big fan of blueberry tastes, with Game Fuel’s Berry Blast and Red Bull’s Blue Edition among my preferred concoctions. Blueberry Raspberry is the strongest tasting of the four flavors, but to its detriment rather than its benefit. It’s the only one where the medicine-y taste bleeds through water a bit too much, and the blueberry flavoring tastes very artificial.

The other three flavors, on the other hand, are fantastic. My favorites are Grape Apple and Straw Kiwi (a.k.a Strawberry Kiwi Banana), with both tasting delightful and “Grapple” having that wonderful sourness to it. Straw Kiwi, along with Fruit Punch, has a much softer and sweeter flavor when in water, and all three of these go down easy, with my draining most of my bottle of water quickly after combining it. Speaking of combining with water, this might be the easiest way I’ve done it yet. Aimbot is a liquid, and hence mixing quite well with water. I’d be willing to try it if they ever put this out in a powder form, but it’s nice to drink something so clean and “un-chalky”.

As far as the effect of Aimbot, it couldn’t improve me much, because I’m already a master at video games. Ha, I couldn’t help myself there. In all seriousness, I did find Aimbot to improve my mental clarity and I felt more alert when using it. I tried drinking it in the morning, and then another day right before I began my night gaming session, and in both cases it was the boost I needed. I can’t tell you for sure it will make you better at a video game, but sometimes all you need is to notice someone a split second before they notice you in an FPS, and I was at least focused enough to be able to take advantage of it. If you couldn’t tell from the video above, my 18-1 match of Black Ops Cold War went pretty well, and that was in part due to the assist provided by Aimbot. The other thing of benefit worth mentioning is that I never had a hard crash from it. There is a feeling of “coming down off the high”, which is to be expected if you’ve ingested that much caffeine, but it was a slow roll rather than a sudden halt. That means Aimbot has been well thought out and formulated, and I appreciate that.

The last thing I want to bring up is the price. Being someone who works in upper management in retail, I understand there is plenty of overhead, and being someone who buys energy shots and drinks I also understand the premium price point. I wouldn’t say Aimbot is priced incorrectly, but it is at the high end of the spectrum, coming in around at $3 a piece for a four pack, and $2.50 a piece if you buy a box of forty. It’s not ridiculously high if you compare it to something like Five Hour Energy, but most of us don’t ingest that stuff daily (at least I hope not). G-Fuel on the other hand is a lot less expensive at less than a dollar per serving, not counting the countless promotions and streamer codes you can use to get it cheaper. It’s not detrimental to Aimbot, and this is a premium product, but I can see this being more of a special occasion purchase than a daily drink.

Aimbot Energy is a fantastic product, coming in stylish and sophisticated. All four flavors taste pretty good, even if Blueberry Raspberry is a bit disappointing, and provide a nice boost to your physical and mental capacities without a hard crash. They also mix perfectly with water, delivering both an optimum and clean taste. While the price is a little bit steep, the benefits of a well produced formula are at least worthy of it. Aimbot Energy is a great purchase, whether you’re a gamer looking for a quick boost every once in a while or a night owl like me who occasionally needs a caffeine assist at work.

David Burdette is a gamer/writer/content creator from TN and Lead Editor for Gaming Trend. He loves Playstation, Star Wars, Marvel, and many other fandoms. He also plays way too much Call Of Duty. You can chat with him on Twitter @SplitEnd89.
Related Articles: Aimbot Energy 1.1
Share
Tweet
Share
Submit