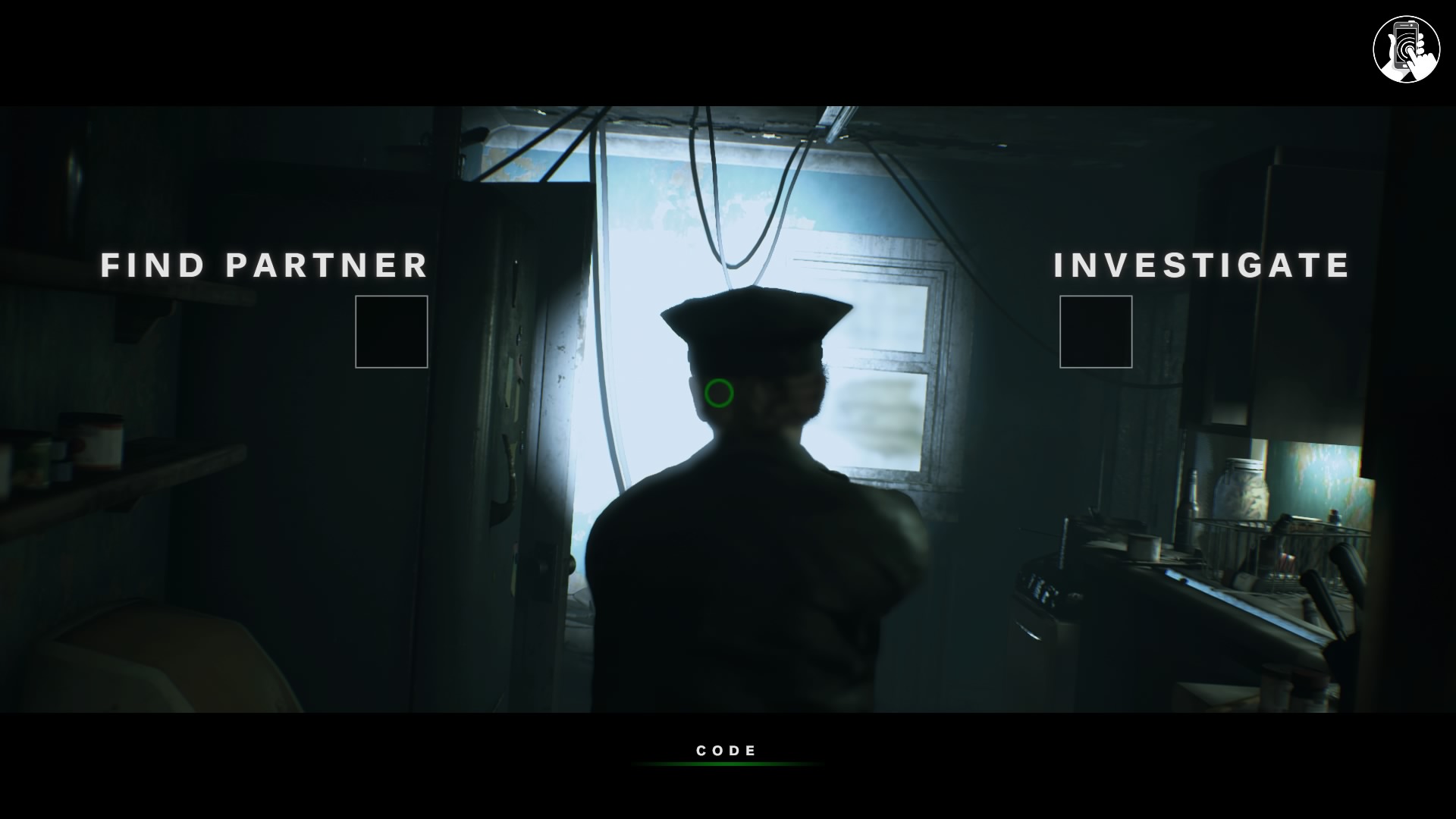 Hop right into an ongoing investigation into the Trapper killer in Hidden Agenda, a story focused game where you are trying to catch a serial killer who leaves behind rat traps at every crime scene. The story begins as you take control of rookie cop Becky Marney as she and her partner, Tom, arrive to check out a disturbance. It isn’t long before you are given your first choice of how you want to handle things. In Hidden Agenda, choices are everything; character behaviors, events, and even the ending of the game all depend on the decisions you make. This adds an extra level of excitement and engagement to the game. Instead of just plowing through a linear story, you are invited to explore a branching narrative of mystery, intrigue, and drama.

Opting to search the area instead of going inside

Hidden Agenda is unique in the fact that your phone or tablet is your controller. Whichever device you use will give you a general menu from which to work with. This menu allows you to pause the game, open the logbook, and serves as your tool to move the cursor on screen. The logbook has four main sections: biographies, plot, ripple effects, and rules. The biography tab allows you to check out what you’ve learned about every character you encounter, the plot tab lays out the story so far, the ripple effects tab lets you look at results of some of your actions, and the rules supply more information about how to play the game. The game constantly updates those sections as the story unfolds.

In addition to choices, you will have to react to QTEs, otherwise known as quick time events, and also search for clues at designated locations. For anyone who may not be familiar, quick time events are when a situation has a specific button that must be pressed or certain analog stick must be moved within a short time in order to succeed in an action. At the top of the screen, there will be pictures of the general area where each clue is and you have a limited amount of time to find them. The more you find, the more information you have to work with. In a game where you are trying to determine who the killer is, you want as much information as possible. Succeeding in a QTE can be the difference between getting closer to the truth or dying in the process. Yes, you read that right: It’s entirely possible for the story to end with Becky dying. Unlike many games, there’s no game over screen and a retry button; if Becky gets killed, then that’s the end. From there, you have to start the game over again, but that’s part of the experience. It allows you to go back and make decisions based on what you learned from your previous playthroughs. There’s a sense of trial and error, but the branching structure of the story keeps it engaging.

The game is broken up into three parts, and after each part, the game pauses to give you a chance to stop or choose to continue. At the end of each part, a short montage of your choices are shown. This allows you to reflect on the decisions that you’ve made and think about them in the grand scheme of things. This is something that anyone used to the Telltale games would be familiar with, although the choices aren’t compared side by side in Hidden Agenda.

Hidden Agenda can also be played with up to six players. The story stays the same, but everyone gets to make a choice, with the majority deciding which option progresses the story. In other words, it comes down to a vote and majority rules. There are two exceptions to this however; some choices state that all players must agree on one option in order to continue, and then there are the takeovers. Takeovers are a special feature which allow a player to take control and make the choice for everyone. One takeover can override another takeover, so chain reactions may occasionally happen. Takeovers are obtained by being the first one to find clues and activating QTEs. This adds another aspect to the game, as you never know when somebody may force their way into control.

One of the most interesting aspects of the multiplayer is aptly named “hidden agenda.” Once in awhile, the game will state that one of the players has been given a hidden agenda, and each player flips a card on their screen to determine if it’s them. The hidden agenda states a goal that the designated player should try to accomplish soon. A short while later, every player is given the chance to guess who has the hidden agenda. When an agenda either succeeds or fails, the status will pop up on the screen and the designated player is awarded points if the mission was a success. Anyone that correctly guesses the player with the hidden agenda is also awarded points, but not as much as a successful agenda. This can lead to players lying to each other and trying to swing things in their favor, making takeovers especially helpful here. Near the end of the game, all players get their own end-game agenda to work towards, and any player that gets the game to end as stated on the card wins points. Once the game ends, the player with the most points is declared the winner.

Whether you’re playing alone or with a group of friends, Hidden Agenda is an exciting crime drama that makes you want to discover the truth. It plays like an interactive movie, and if that’s your type of game, then you can’t go wrong with Hidden Agenda. Jump right in and see if you can determine the truth behind the Trapper killer.

Hidden Agenda is like stepping into a crime drama and influencing how it plays out. The branching narrative is a welcoming aspect and makes me want to play it multiple times. It's fun to play alone, but taking it on with friends is a treat all on it's own.

Codi loves to play video games and watch movies. He will watch almost any kind of movie just to experience them. His ideas take inspiration from the shows and movies he watches, and games he plays. He also loves a good pun.
Related Articles: Hidden Agenda
Share
Tweet
Share
Submit