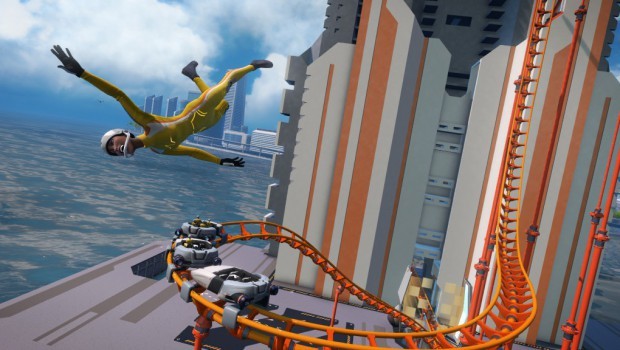 ScreamRide is a Microsoft exclusive title that has successfully fused the creative depth of Minecraft with the destructive, exhilarating gameplay of the Burnout series. After its debut at Gamescon 2014, ScreamRide instantly grabbed my attention. The game looked to deliver on what many next generation games seem to be lacking, fun. After finally putting some time into ScreamRide I am pleased to report that developer Frontier Developments has crafted a great new IP for Microsoft’s library. While it’s not without its flaws, ScreamRide manages to deliver on the fun while bringing along with it a surprising level of depth and quality.

From a design standpoint, ScreamRide is very simple. I appreciate that the developers make it easy for the player to jump in and play instead of bombarding them with a clunky menu system that is littered with screen after screen. Right away, you have the option to begin playing through the campaign or jump into the sandbox mode where your imagination can run free.

If you choose to ride through the campaign first be prepared for a varied but short experience. There is not a deep, cohesive story to be found here, aside from the overarching setting of the virtual amusement park. What you do wind up getting, however, are brief cutscenes before and after each event that either show the after effects of your rollercoaster crashing, or the banter between the riders and amusement park workers. Some can be funny and others don’t quite hit their mark. While you are taking control of the actual ride, you will sometimes see riders look back into the camera and give a gesture of elation or dread right before they descend onto the track or after hitting a huge loop at break-neck speeds. These short cutscenes and little instances of AI awareness really give the game some character and help minimize the absence of a proper story.

Usually the result when you don’t break for a sharp turn.

Throughout the campaign are six different regions that you will be able build, ride and destroy your way through. Each of these zones has a very distinct backdrop. The first region you play in, Populous Labs, is an ocean surrounded by a modern cityscape with towering skyscrapers. Others, like the later region of De Frusna, have you maneuvering through a glacial landscape surrounded by icebergs. Even though it is only a cosmetic difference, it does a lot to keep things fresh as you burn your way through the campaigns’ events.

And boy there are quite a bit of campaign events to burn through, since within each region you will be charged with completing around nine events that are separated into three different categories. The first category is called ScreamRider. This is where the game places you in the helmet of a rider that is on the coaster in the first person point of view. You are tasked to complete the track with the highest possible score from points you earn by getting a perfect boost at the start of the track, riding on only two wheels or landing perfect jumps across huge gaps in a timely manner.

The second category is called Demolition Expert, which, as you can tell, is the most explosive of the bunch. This mode wants you to destroy the surrounding area and cause as much damage as possible. You control a catapult type apparatus that launches you toward towers filled with explosives for a beautifully destructive pay off.

Your weapon of destruction.

The third and final category is called Engineer. This is where you need to help complete a roller coaster track from getting to point A to point B in the most insane but safe way possible. There are certain criteria in place that you have to follow which add an extra layer of difficulty. Sometimes you have to lay down a certain amount of track or keep the nausea level at a certain degree. This was my least favorite category to play since the camera controls felt very wonky while zooming in and out when trying to precisely place your track and plan your next move.

Camera controls aside, the game has a surprising amount of depth to it. Everything from the amount of nausea a turn can induce, to the speed you need for your coaster to make it over the next hump is all a very welcome touch. The depth of ScreamRide really shines through in the Sandbox mode. Here you can customize everything from the backdrop your ride is in, to the amount of grass and road that can be placed on the ground below. The tools that are in place allow for the gamer to truly create some crazy tracks. You unlock these different tools and aesthetic devices as you progress through the campaign and earn a high number of commendations. Think of this mode as a huge toy box where anyone who has been to an amusement park and dreamed of building the most intense ride ever can create, destroy and simply have fun in. The game even allows you to upload and share your creations as well as hop into other player created attractions. Just like Minecraft, this mode will be as deep as the player’s imagination allows it to be.

The more creative you are, the more fun you will likely have.

The length of the game, which seems to be a hot topic in today’s gaming world, will vary. If you are just looking to play the game for the campaign, do not expect to see a good return on your investment. The campaign only has legs if you actively compete in the online leaderboard race, or aim to receive the highest honors for each campaign event. What makes it even worse is the fact that there is no multiplayer in the game. The bulk of the replayability will come from the game’s sandbox mode which again will only go as far as players are willing to take it.

Graphically, the game is no Ryse: Son of Rome, but players that are used to previous Frontier Developments titles like Zoo Tycoon and Roller Coaster Tycoon, pretty much know what to expect. The animation is slick, and the gameplay is fast and fluid whether you’re riding in the coaster or being launched hundreds of feet in the air to smash through a building. I did, unfortunately spot some very low-res textures that made me cringe from time to time, and there was some noticeable slowdown when massive destruction was taking place on screen during the Demolition events.

Overall, Scream Ride is a fun, simple, refreshing break from the overly gritty gaming tropes that have oversaturated today’s gaming landscape. If you are looking to try something a little different and have enjoyed games such as Burnout and Minecraft, then give this game a spin. Just be sure to pack a helmet and maybe even a parachute before you dive in.

ScreamRide offers an experience that is fresh, deep and a blast to play. Despite its lack of multiplayer I kept coming back for more to test my creativity and wreak as much havoc as possible.