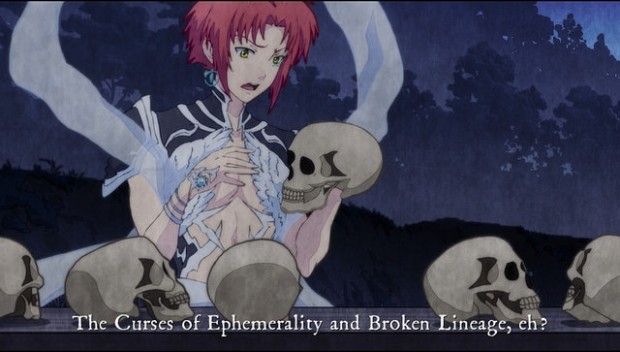 These themes are the tenets of Oreshika, a way of life for a game about a house cursed to charge relentlessly into the slaughter. Even in the opening segments, I knew I was in for a vastly unique experience. Greeted with images of a clan sobbing over their lost, demons rampaging and gods observing from their ivory heavens, Oreshika: Tainted Bloodlines sets itself up to be a vastly unique experience.

You are the head of a clan tasked with defending the Five Instruments, the treasures of an empire that are stolen by demons from under your watch. Shaming your clan, the emperor sentences your entire family to death, as both punishment and as an appeasement to the gods.

One god takes pity on you, and with the help of a woman named Nueko, revives your clan to allow them to seek vengeance and redeem their name. There’s a catch, however: your bones are also beset with two curses – the Curse of Ephemerality, which shortens each member’s lifespan to only two years, and the Curse of Broken Lineage, preventing them from procreating with other humans. With the help of the gods and a small weasel-girl helper, you re-establish your clan’s domain and get to work.

The cutscenes are fully animated, though an option for English VO would have been nice.

As a sequel to a PSX-era JRPG, Bloodlines calls on many standards from that era. There’s a great amount of depth to this game, and it does little to hide that. After starting a new game, you’ll be greeted with a list of difficulty settings that also tally up estimates of how much time each would take to complete. The easiest clocks in at a solid 30 hours, while the most difficult has an estimated 120 hours for completing the campaign, and from my experience, those are modest guesses.

This host of content is significant, but thankfully, it rarely feels like filler. As head of the clan, it’s your duty to plan out your ventures and plan of attack each month – where you’ll venture, what your goals will be, where to invest your money, what supplies to bring with you and any miscellaneous goals you may have all coalesce into a single itinerary for efficient demon slaying.

Skills can be cast by multiple party members, increasing their effectiveness but leaving you vulnerable while they charge up.

Oh, and the demons you’ll slay. Each and every area you’ll explore will be rife with enemies. The dungeons are displayed in isometric fashion, with enemies walking around on the map. They’ll engage if they see you, but you can also sneak up behind to get the drop on them, rewarding the cautious player and giving you a better chance at getting loot.

When combat begins, you’ll roll a slot machine of items that can potentially drop from the encounter. From scrolls containing new abilities and better armor to just good old-fashioned cash or a big pile of nothing, anything is possible, creating incentives to continue engaging enemies rather than rush through a dungeon.

There is a catch, however, that elevates Oreshika’s standard encounters beyond the monotonous grind of other JRPGs. Each party, including your own, has a designated leader – if the leader falls, your party falls. This provides an easy method of ensuring you get the loot you so crave, but it also means you lose out on the experience gained from eliminating all the enemies. If you decide to route the entire enemy party one-at-a-time, however, you also run the risk of the leader fleeing, with that high-level scroll or pile of money in tow. Bloodlines forces you to carefully plan out each encounter, and to be prepared to prioritize and make decisions in the turn-based heat of battle.

Your clan, luckily, will have many tools for effective demon demolishing. There are eight classes in total, and you can choose up to three for your three starting clan members. They vary from standard warriors and archers to dancers, who can strike entire columns with their fan attacks, and lancers, who pierce rows to strike both the front and rear guard. Attacks vary based on positioning, too – a gunner in the rearguard may opt to strike a single target with a precision shot, whereas a frontguard gunner will rely on the spread of a blunderbuss-style weapon instead. These classes continue on through your descendants and skills naturally pass down bloodlines, allowing your clan’s achievements to continue even past their momentary lifespans.

You can manually issue orders to your clan members or accept their decisions, increasing loyalty with them.

A Drop in the Pan, An Echo Through History

With only two years to live and a whole lot of revenge to partake in, your clan’s continuation is a top priority. But without the ability to conceive with other humans, your family must earn the approval of the gods to conceive children, through a rite called the Divine Union.

In practice, it’s a breeding system with surprising depth. You earn not only experience from killing demons, but also devotion, a currency that can be used to earn a god’s affection and initiate a union between them and one of your heirs who has come of a certain age. There’s a vast pantheon of deities, each with certain characteristics and traits that make them more suitable for your male and female descendants to partner with, to create a new generation of demon-slaying soldiers. Sadly, the sins of the father carry over and your ancestors also bear the two curses, but they can carry over classes, abilities and skills learned from both their parents and any teachers you may assign to them.

Many games attempt to create a sense of attachment to otherwise nameless pawns in a vast strategy game, but few succeed like Oreshika. Each member who passes receives a short memorial, recalling events from throughout their life.

When my first character, the one I had created and grown fond of, passed out during a monthly planning session I felt a pit in my stomach. I knew his time was approaching – two years can pass quickly, and as the scroll of his achievements rolled across the screen, I reflected on his legacy in quiet gratitude. He had carried my party single-handedly through a dungeon, slain countless monsters, spawned two promising offspring and brought honor to the clan.

His last words, a final touch to add that last bit of sentiment, were heartwrenching. He apologized for burdening his descendants with such a terrible curse, but encouraged them to embrace the anger they held with him and use it to enact vengeance on those who had doomed them to such a pittance. Raise your arms, he said, and step over my dead body and onto the next battle. His portrait faded to black and white, and then only to black.

Due to the curse, Divine Union is the only way to carry on your quest after your clan members’ years are up.

It was a small moment that may not be as big of a milestone for some as it was for me, but it was indicative of one fact: Oreshika’s themes of sacrifice and duty carry through each generation, and you receive that grim reminder with each fighter’s passing. There is no time to grow attached to a single member of your many generations, but rather the identity of the clan itself and the progress made in each passing.

The next few generations did not pass with the same sentiment of bittersweet memoriam, but even in later generations, you’ll see traces of your clan’s ancestors. Children will resemble both their holy and mortal lineage, and even small traits like having the same eyes or hair color as the initial three you start with remind that this isn’t a game about breeding monsters or soldiers – it’s about a clan, a family, and a lineage.

The feasts are a ripe time for demon hunting, but you often run a danger for being overwhelmed.

An Ancient Tapestry in Motion

The aesthetic of Oreshika is beautiful, taking cues from ancient Japanese paintings and kabuki stylings. The painterly look keeps the action fresh and oozes immersion, but also makes it difficult to differentiate some of the enemies from each other. When layered one-over-another in the battle layout, mild color variations and even two different enemies can get confused in the motion of the backgrounds and design of the enemies. It’s a small problem, but when your mission for the month is to hunt down a certain enemy for a certain scroll, it can be a little grating.

Also, your goal in Bloodlines can often be unclear. Since you are often the decider of your clan’s fate, it is in your hands to complete tasks that will further your clan, but it is rare that you feel like you’re making a “correct” decision. You can always consult your weasel-god assistant to get a decent plan for the month, but that often leads to executing a plan without understanding exactly why you should be doing these things in the first place.

Nueko quickly becomes a key component in your battle against Abe no Seimei, the game’s protagonist.

And there’s the elephant, or rather, goddess in the room. Nueko, seen in the opening cutscene giving her life to resurrect your family, is a part-human, part-deity being that can regenerate from any wound, an affliction that also plagues the main antagonist of the game, Seimei. Nueko eventually reappears and becomes a sort of patron-saint for your clan, and joins you in key story battles as well; but her required participation in battles led to a great deal of criticism when Oreshika released in Japan, as she has very weak stats and you must spend devotion to revive her if she falls in battle or if two years have past since her last revival, devotion that could be arguably better used to purchase the favor of better deities.

Thankfully, the mechanic is a smaller nuisance than some would have you believe, though it is still a nuisance. Her participation in key battles means sidelining a more effective member of your team, but this hindrance rarely becomes more than a slight increase in difficulty in boss battles. The devotion required to revive Nueko is also very small; her revival cost is usually about a tenth of the cost of winning over some of the top-tier gods, and you’ll only need to revive her a handful of times.

Seimei is a standard JRPG villain, enough to drive the story but rarely stands out.

A House of Leaves, Moments Before the Wind

Oreshika: Tainted Bloodlines surprised me, in all the best ways possible. I’ll admit I went into the game with only a faint interest and already feeling jaded from recent and largely average offerings in the JRPG market.

Tainted Bloodlines elevates the genre by building on the bones of its predecessors, and crafting a tale that is unique to each player, with a combat system that is both simple to learn and a joy to master. The story is cheesy and sometimes lackluster, but the emergent narrative created by the growth of your clan and progress of your descendants weaves a wonderful tale of its own. Those looking for a valuable time sink with high production values and a deep web of mechanics and systems to min-max will be more than appeased by the offerings of Oreshika.

Oreshika: Tainted Bloodlines is a masterful retooling of JRPGs before it, and only a handful of problems hold back an otherwise excellent tale of family, honor, and reclaiming what was lost.