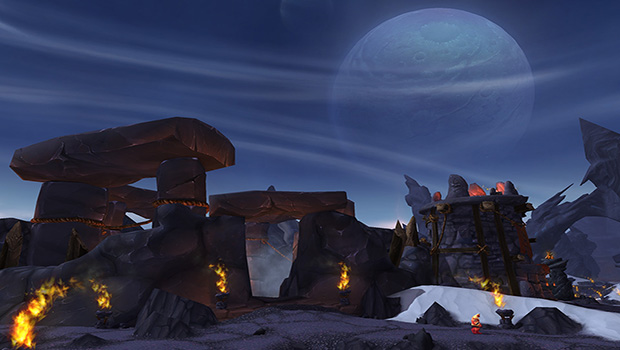 World of Warcraft has been around so long it surprises me that it’s still something so many people are playing and thinking about. I can’t believe a game I started playing back in college, before I had any real work experience, before I had a wife, before a lot of things in general had come to pass in my life, is something I’m still playing to this day. Granted, much has changed within the game and I have not been playing consistently, taking as much as two years off during the last expansion (Mists of Pandaria). Warlords of Draenor is special, though. We all realized as much when the game’s developer, Blizzard, released the intro cinematic. And after leveling my Draenei Priest to 100, the new level cap, I can emphatically say that, indeed, if you want to see WoW at its very best, this is the time to play.

WoW is categorized as a Massively Multiplayer Online game, which is convenient for marketing purposes, but the experience is in fact more diverse than the category alludes to and if you ask five people what they spend the most time doing in the game and you’ll likely get five different answers. Sure, at some point everyone has to complete quests in order to level up, but that’s just one aspect of the broader journey. Some people are strictly in it for the joy of getting to know the various character classes (i.e. leveling). Others enjoy traversing the beautiful zones in a hunt for achievements, to see everything the world has to offer and be recognized for their explorative spirit.  Many play it cooperatively to conquer the game’s most difficult dungeons and enemies, also known as raiding.  And still others play it to compete against other players in head-to-head combat. Tying it all together is a living, breathing community that offers the potential, if you so wish, to meet other adventurers, make friends, and even, in especially serendipitous cases, meet that special someone.

For me, personally, the draw is twofold: I love getting lost in this virtual world, it’s my metaverse (see: Snow Crash). I also love the cooperative/social elements; some of my best friends have been playing the game as long as I have and I can’t think of many activities more fun and engaging than playing WoW with them. The good news is, regardless of what you come to WoW for, Warlords of Draenor seems to offer the best version of it.

Garrisons are the new “hook” this time around and it’s a much, much deeper change to the core gameplay than I was expecting. Your garrison, rather than a capital city like Stormwind or Iron Forge, will become your new headquarters. It’s here that you will work on your professions and organize missions for your followers.  Your garrison is actually an instance, rather than a permanent structure existing within the common map, so you can’t hang out there with your friends. But, you can customize your garrison quite a bit (mostly in function rather than design) and it will soon be a bustling operation that supports your personal goals in the game, be it raiding, player-vs-player (PVP) combat, or what have you.  Essentially, it does a great job at making you feel like you have a stake in the world instead of a lonely hero passing through it.

The new zones are gorgeous and wonderfully crafted. Aside from absolutely admiring the art direction, what I find spectacular about Draenor’s zones is that they feel more complex – in a good way – and filled with the likes of rolling hills, camps employed with allies and enemies, ancient structures, foliage, hidden paths, caves, and the like. Sure, some areas are dedicated to large, open space with not much more than sparsely placed trees, foliage and wild life, but mostly you’ll be running across locations brimming with things to do and see.

A zone that effectively displays the evolution WoW has seen over the years in terms of world design is Nagrand. Nagrand was featured in the game’s first expansion in 2007 and it returns today in Draenor as a past version of it. Draenor is Outland in a past time, in case you’re not plugged into the lore. Upon reaching the zone in Draenor for the first time I was immediately taken aback by its beauty. The brushy growth that blankets the ground, the detailed rock formations, the twisting paths that take you up, down, and around mountains, the murky caves, the unique landmarks, the bustling faction camps… it all comes together to display the magnitude in which both the technology and the abilities of the developers have improved.

The upgraded character models also go a long way towards modernizing WoW. Characters animate more realistically now and faces actually have life in them rather giving you the cold stare of a wax statue.

The soundtrack is equally impressive and reflects a sense of growth in its style of composition. There were many times during the wee hours of launch, when all of us were absorbing the new content for the first time, that people spoke out about the music. There’s a generous portion of aggressive tunes acting as overtones for the conflict, but it’s the dramatic ballads that sparingly sneak their way into the mix that are the most endearing and heartfelt.

Questing is a mixed bag. Since the zones are such a pleasure to traverse through, it invariably makes questing more enjoyable. But the fundamentals of questing, while more streamlined and approachable than ever, is still rudimentary in nature and you’ll find yourself steeped in the usual collection of kill orders and fetch tasks. As usual, a small number of quests offer a degree of novelty in their mechanics, such as dropping bombs on hordes of enemies from an airplane or using a flamethrower to eradicate dangerous fungal growth. These novelties aren’t particularly fun, though, and mostly serve to break up the monotony.

Reading the quest text also isn’t as rewarding as it should be. I like to have context for my actions and the places I’m spending time in. Unfortunately, the quality of the storylines, with the exception of the main Iron Horde conflict, is sorely lacking. There used to be a time, and you can of course revisit that time if you start a new character and play through the old content, when quest lines would pull you in and involve you in a series of compartmentalized soap operas. I remember quirky stories of sordid love affairs, of the terrifying dilapidation of towns by way of infestation and plague, and journals that took you into the minds of the people you were fighting for. That simply isn’t the case anymore and in all of the quests I completed in Draenor there are only a handful that carried any emotional weight to me.

I suspect Blizzard concluded that a significant amount of its player base do not read the quest text and decided to focus their efforts on an increased amount of scripted events and cutscenes. Thanks to the advances of the graphics engine these sequences look and feel better than ever. At the end of the day it’s a tradeoff that is subjective; if you enjoy getting deep into the lore via quest text, you may be disappointed. If you think quest text is a bore then the scripted sequences will do well to keep you informed without hamstringing the pace of your leveling.

The new dungeons, like the world they inhabit, are well-designed and super creative. These are easily some of the best dungeons that the game has ever seen. Conceptually they are interesting enough; an instance called Grimrail Depot will have you battling orcs on a moving train with a wind current that slowly pushes you back. There’s also a fair amount of “positioning strategy”, as I like to call it, meaning that you’ll have to be aware of your surroundings and stay on your toes to avoid attacks rather than mindlessly mowing everything down. A few classic instances, such as Blackrock Spire and Molten Core, return as well with a new coat of paint and alterations to the layout.

I can’t comment on the quality of the PVP or the raid content just yet, as of writing this the raid dungeons are not available and PVP hasn’t taken off yet. However, if the current content is any indication we should be just fine in those areas too.

Warlords of Draenor doesn’t do anything major to shake things up, even the garrisons are an optional element that can be ignored if you don’t feel like participating. What this expansion offers is the very best version of a long-running MMORPG. It’s still one of the best gaming experiences ever created, it’s still a place that’s exciting to explore, it’s still satisfying to acquire new loot, it’s still a cool place to hang out with friends. If you took a break, like I did, you’ll be surprised at how fun the game still is. In Warlords of Draenor everything is different but nothing has changed. Welcome back.

World of Warcraft: Warlords of Draenor

Warlords of Draenor is the pinnacle of a game we've been playing for over 10 years now. It's absolutely the most polished version, with stunningly beautiful world design and a wonderful soundtrack that will fill you with awe during the course of your adventure. While I do yearn for more soul in the quest stories, the phenomenal scripted sequences and cutscenes are more than a fair tradeoff. Those who play the game for the sport will likely enjoy the Warlords content, from what I've seen so far in the pre-raid dungeons and PVP the design caliber is as high as ever. If you've been looking for a reason to be excited about World of Warcraft again, this is certainly it.