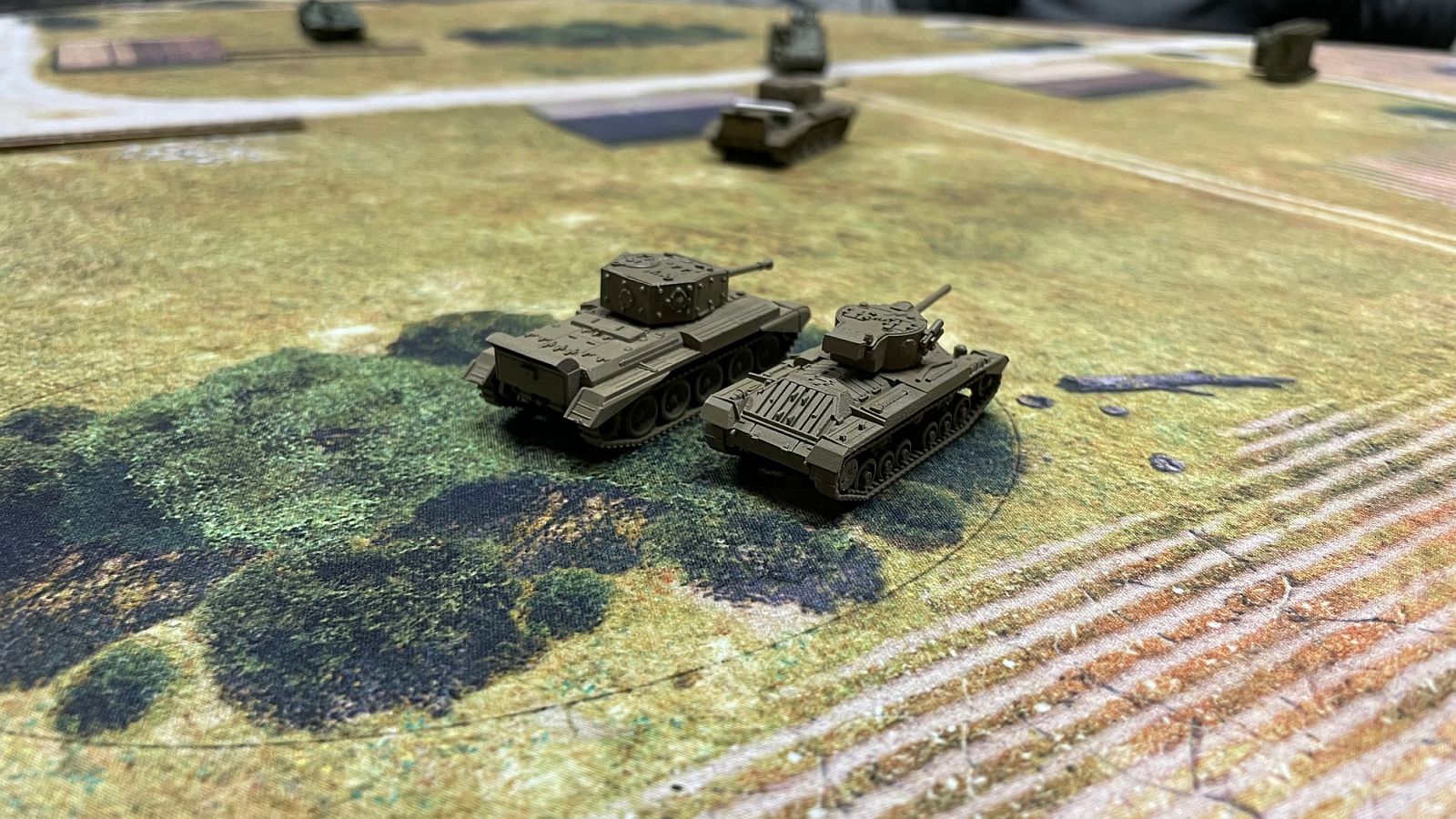 British Cromwell and Valentine hiding in a thicket

World of Tanks the miniatures game attempts to bring the mega popular PC game of the same name to the tabletop. Players will create squads of tanks, roam around the battlefield, and attempt to blast each other to pieces.

If you’re familiar with other popular tabletop skirmish games with movement templates, upgrades, and squad building, then there is nothing new here. You can pick up World of Tanks easily and jump in pretty quick. There are a few nuances with line of sight and movement that differ between what you may be used to but it’s all pretty easy to understand. For players completely new to the genre, the rulebook is short and does a decent job of teaching you the game. No wargaming experience is required.

In World of Tanks (WoT) each player will build a squad of tanks complete with upgrades and crew. There is no nationality restriction in squad building so you could have your US Sherman fighting alongside a German Panzer but keeping it thematic is more fun in my opinion. A round of WoT is split into three phases: Movement, Shooting and Command. Rounds will continue until the determined scenario ends or one player completely destroys the other’s force. 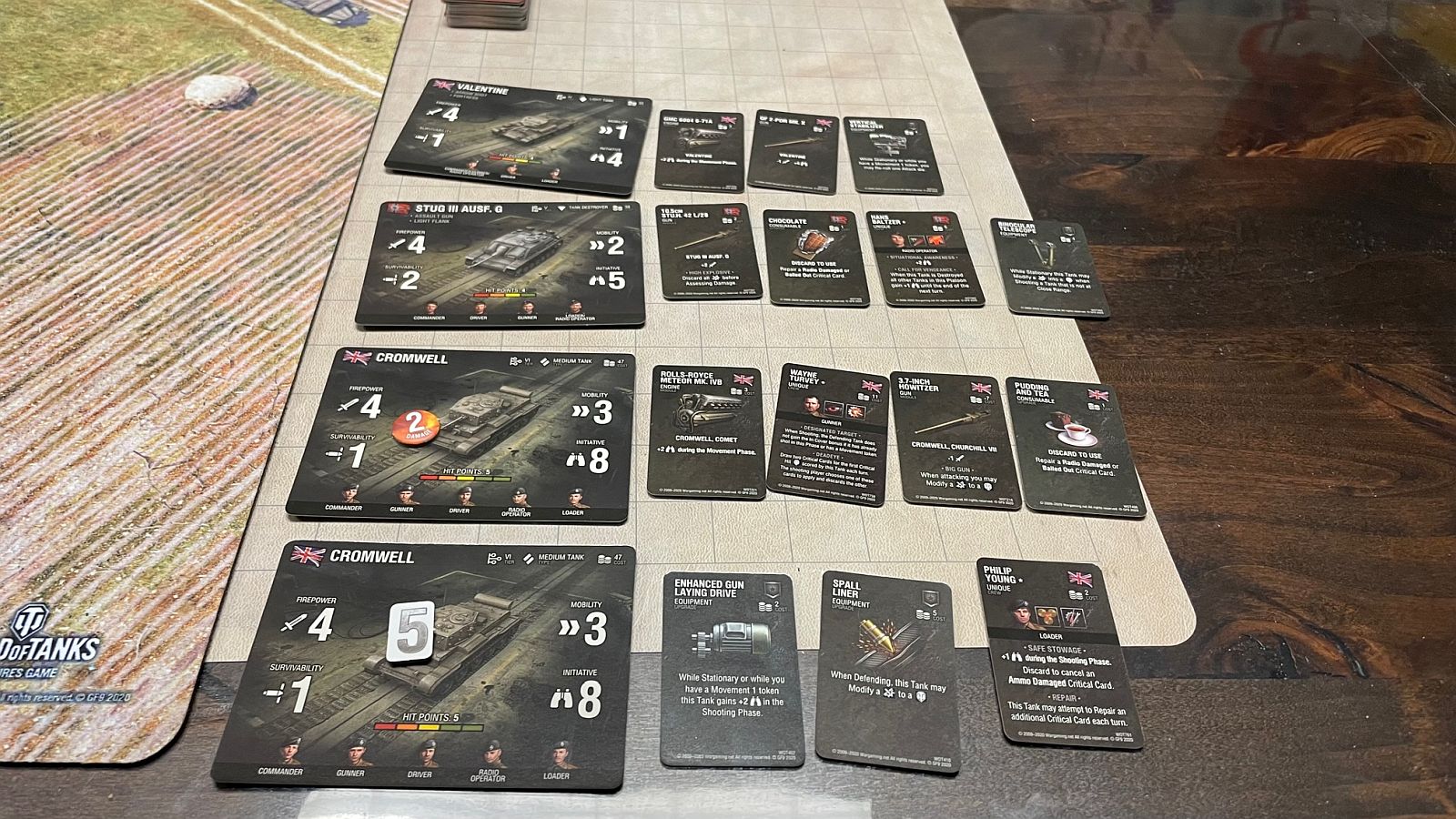 Squad with upgrades and crew

Movement is done using the provided template, with the number of moves determined by any given tanks speed rating. The game is pretty liberal with tanks’ ability to make turns, simulating the use of tank treads and their ability to turn on a dime. Players will move their tanks in order of ascending initiative printed on their stat cards with ties going to the player currently holding the Advantage tile. Besides just positioning your tanks, movement affects every other part of the game. A tank that moves is both harder to hit but also is less accurate in their own shots. Players have to balance getting into advantageous positions or moving out of vulnerable ones with considerations for defense and landing shots.

Shooting is done in order of descending initiative. Keeping in mind dice modifications from movement, players will roll to see if they land hits or crits. There are numerous upgrades that players can use that will modify dice, provide defense, repairs, bonuses in specific situations, etc. Generally shooting a tank head on isn’t a great strategy. The front armor is thick and repels all but the luckiest of shots. Players will be constantly moving to try and get that side shot or even better rear shot for big damage. Regular hits will put damage on a tank but crits can have bigger effects like disabling your gun or engine until repaired. 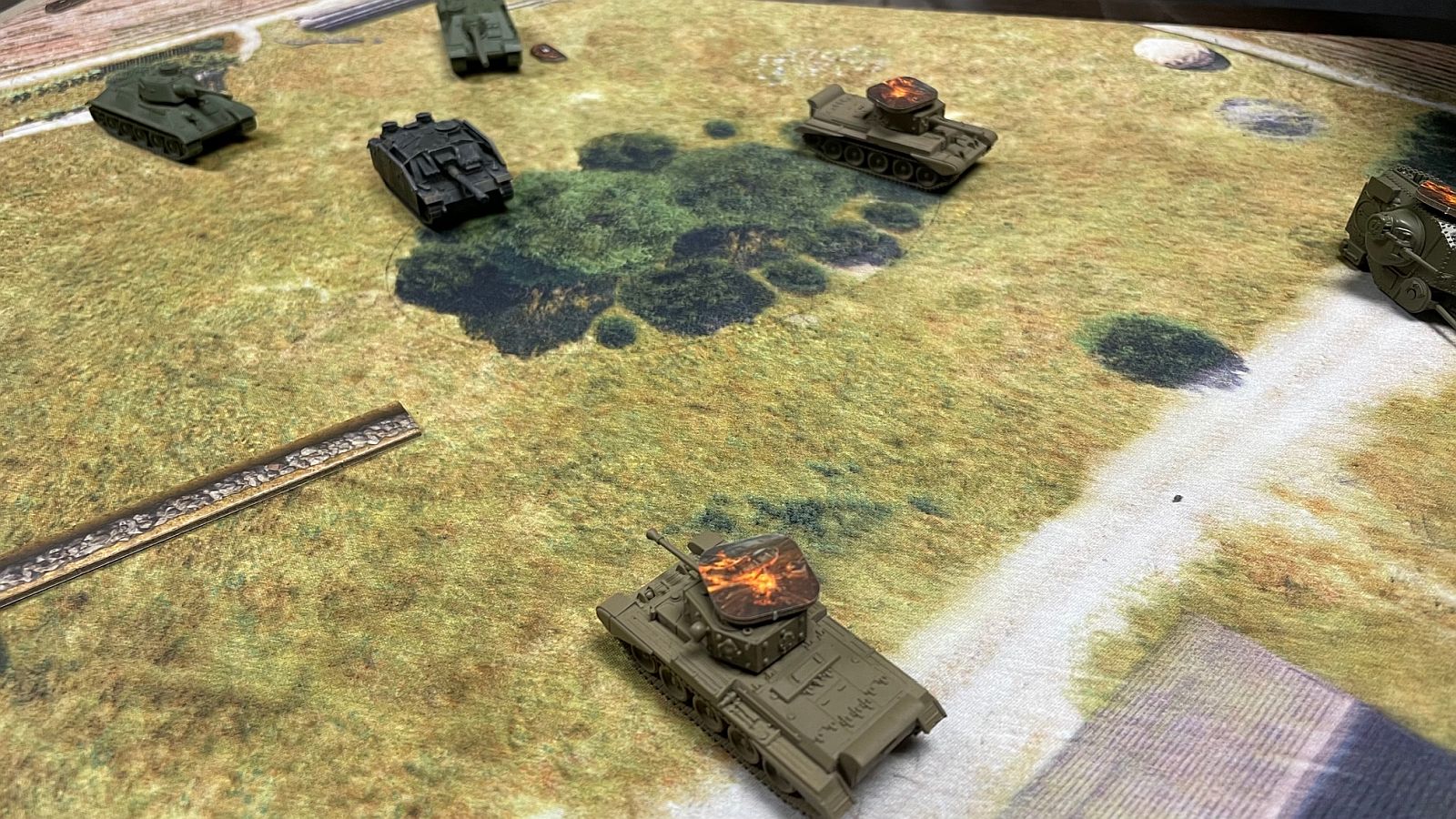 In the Command phase, players will mostly refresh for the next round, but some tanks and upgrades provide abilities that will be triggered here. Command phase bonuses range from extra movement to repairs and things like that. Once all abilities are done and refreshed, damage repaired if possible, you go another round unless the game is over.

I can’t review WoT without talking about X-Wing. If you’ve played X-Wing, by far the most popular of this style of game, then WoT is at once familiar and also glaringly inferior. While the ascending and descending initiative system is essentially the same in both games for determining who moves and shoots in what order, WoT is missing the pre planned moves that are a staple of X-Wing strategy. This results in tanks chasing each other in circles seeking side and rear shots. There is little possibility of making a mistake or out thinking your opponent when you have perfect information on the board state when it’s your turn. Once you get in close, the first tank to move has no chance of shaking off a pursuer. The rest of the gameplay is largely the same but WoT makes less use of dice symbols to activate special abilities than X-Wing does. Where X-Wing feels fast and tense with each reveal of a movement dial being a moment of joy or impending doom, WoT feels plodding and random.

The tanks themselves are nice looking models, if a bit light and fragile feeling. They are colored for each nationality but otherwise unpainted. The neoprene playmat is beautiful and functional. The Garage, a foam case, holds all of the core box pieces with room for more tanks (up to 14 total) from expansions and gives you confidence your tanks will be protected when you take this to your LGS. 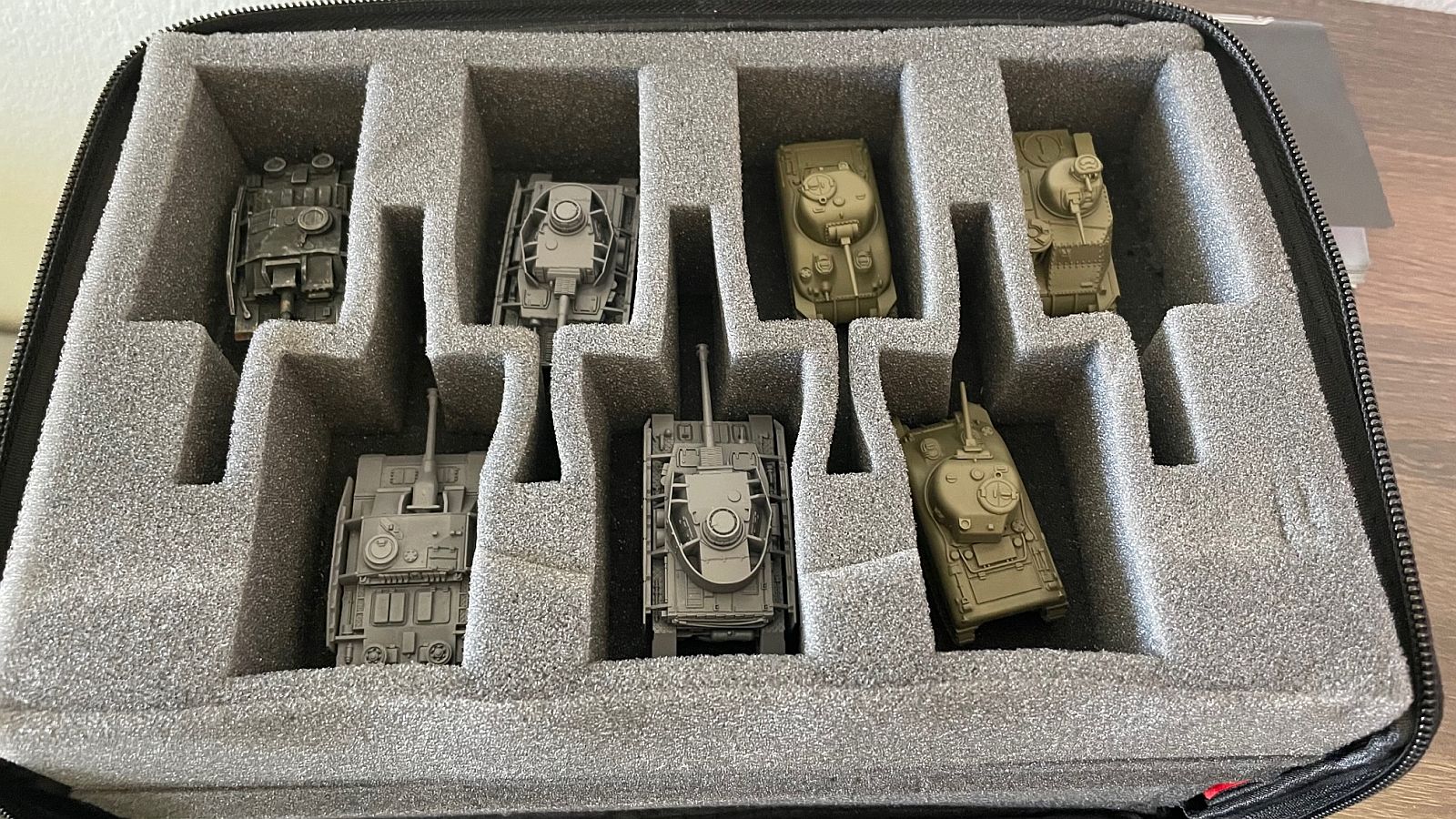 It’s also worth noting that the core box and each expansion advertise a redeemable code for the PC game. I wrongly assumed that this code unlocked the corresponding tank in the PC game but all of the codes are the same and only unlock a less than useful intro pack and only if you are a new player, so don’t go buying these if your aim is to unlock tanks on the PC.

In the competitive market of tabletop skirmish games there are clearly better choices in terms of gameplay, but WoT is still a fun experience. While other options in the genre play better, driving tanks around and blowing each other up while making explosion noises is still a fun time. If you’re looking for a peak competitive experience then look elsewhere, but if you love tanks then I think you’ll have a good time here.