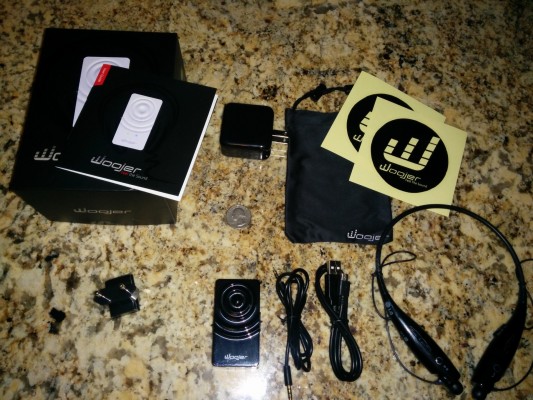 Long time readers of the site are aware that I was severely injured during the military.  I lost more than 75% of my hearing due to a massive explosion that also ruptured my ear drums, snapped tendons in my ankles, damaged my knee, and whipped my head to the pavement.  My eyesight was damaged (thankfully corrected by Lasik), but the damage to my eardrums is unfortunately irreparable and will not be helped by hearing aids.  Unless science makes a significant stride, I will never hear music the way you do.  As a long-time percussionist and lover of music, you cannot imagine how much that hurts me to my very core.

A company named Woojer has created their first product, also named Woojer, but what the hell is a Woojer?  The Woojer is a device the size of matchbox that aims to bring the bass back to mobile audio.  Even if you are carrying a pair of Beats by Dre, or a set of high end earbuds, you still aren’t feeling the beat like you would if you were in the club.  Is it possible to recreate that thump deep in your chest as your favorite track pulls you onto the dance floor in such a small wearable?

There are several companies aiming to solve this challenge, but all of them but Woojer went at it with a vested approach.  By simply strapping a bunch of vibrating kickers to a vest, or requiring a special headphone set, they’ve tried to give a hearty thump to our shooters, but none of them work very well.

The team at Woojer describe their wearable as a “polyphonic transducer that converts sounds into inaudible physical vibrations”.  In lay terms, it’s a subwoofer you can clip to your body.  Far more than just a vibration motor you’d find, for example, in an Xbox or PlayStation controller, the Woojer is part science, part biophysical theory.  The Woojer team purports that, by placing the device along strategic meridian bodylines, the device will trick your body into believing that you are in a room with a powerful subwoofer.  This tricking of the body is called “perceptual interference” and is the same theory behind the phrase “when you hear hoofbeats, think horses not zebras”.  Cousin to Occam’s Razor, it implies that your brain and body will cooperate to “fill in the gaps” of assumption and draw conclusions without your conscious thought.  Or in another example, if you heard barking, you’d assume it came from a dog, not a cat.  Heavy science with a very simple result.

The device itself weighs roughly 2.6oz, slightly more than a pair of rechargeable AA batteries.  It sports a lithium ion battery that gives six or so hours of continuous use, and can be recharged with a standard (and included) micro USB cord.  It’s meant to be placed on the sternum, the front of the hip by the hipbone, on the lapel near the collarbone, or on the belt opposite the spine, though obviously it can be clipped anywhere.  In practice I found the belt placement to be not only the most comfortable, but the most convenient.  The front of the hipbone works very well, but impeded activities like jogging.  Your mileage may vary, but it’ll work pretty much anywhere you can clip it.

Headphones not included. Those are mine. Quit eyeballin’ em.

So beyond the science, how does it work?  The Woojer runs in-line with any 3.5mm jacked device.  This means your cell phone, a controller, or best of all your PC.  There is a port on the bottom of the Woojer to connect your device, and a second port to connect your headphones, but that isn’t the way I used it – I chose a wireless option.  Pairing my wireless earbuds with my cell phone, I plugged the Woojer into the audio jack of my Nexus 5.  The music was carried by Bluetooth to my ears while the beat was carried as haptic feedback to my back.  The Woojer doesn’t require any sort of pairing or installed app (though there is a Woojer app – more on that in a moment) meaning it’ll work with any device that sports the 3.5mm jack.

One of the best parts about the Woojer is that it is not only compact, but also silent.  This means it isn’t disrupting your coworkers or other people at the gym while you enjoy the full range of audio experience.  I’m not sure if it’s the construction of the case or the subwoofer-like molding of the front, but all of the feedback is directed inward.

The performance of the Woojer varies based on the game you are playing.  Games with driving and percussive music give the little device a workout, but shooters are where it’s at.  Firing a high-caliber rifle like a .50cal sniper rifle gives the largest thump, and smaller weapons like a tactical machine pistol give more of a ‘tick tick tick’ sort of feeling.  I don’t have a device like an Oculus Rift to test it with, but I have to imagine that a pair of these would be pretty awesome when paired with that level of immersion.  It’s difficult to describe how something feels in words, but the team at Woojer have demonstrated it nicely with this Jurassic Park-esque video:

As I described before, this isn’t just a variable motor like you’d find in a controller.  As you can see, there are quite a few nuances in the vibration and kicks emanating from the device.  The aforementioned Woojer App isn’t required, but it does provide a simple radial interface to bump up the lower frequencies in any song to push the Woojer unit a little harder.  There are also eight presets categorised as music styles.  The app also has three settings – Headset, In-ear, and Earbuds, but I can’t honestly tell the difference between the last two.  That could easily be a result of my hearing loss, though.

My best use for the Woojer beyond gaming came, surprisingly, during my weight lifting sessions.  Good music can be a fantastic motivator for any workout, but I’m not a huge fan of the music at my gym.  Wearing earbuds and the Woojer meant that I could enjoy my own music as well as the driving bass to keep my butt in gear.

I did find a chance to test out the Woojer with the Microsoft Surface recently as well.  While the speakers on that device are fairly decent, a pair of headphones and the Woojer made for a more enjoyable experience.  Obviously Saving Private Ryan will net more positive effect than watching, say, The Notebook, but there is no denying that it adds a little cinema-thump on the go.

The box for the Woojer contains two stickers, a micro USB charging cable, a short 3.5mm cable to connect the audio source to the device, a dual-USB wall-plug similar to an iPad wall-charger, a European wall plug adapter, a cloth carrying case, and a user guide.  You won’t need the latter, obviously as this device couldn’t be simpler to use.

There was only a few things that gave me pause with the Woojer – the price, not being able to use it while charging, and the heat.  The whole thing will set you back $99 if not on sale.  Like headphones, you can certainly buy the cheap drugstore earbuds, but if you are into audio quality you are going to get what you pay for.  No matter what quality of audio devices you buy, it still won’t have bass you can feel, so this device fills a void you can’t fix anywhere else.

Not being able to use the device while charging is probably less about functionality and more about safety.  The Woojer gets rather warm while charging, and also during prolonged use.  Combining those actions might be a little uncomfortable, though I never felt like it would burn me at any point or anything close to it.  It does mean that if you forget to charge it, you won’t be using it for a few hours though.

Woojer adds the thump your earbuds have been missing. They are a little pricy, and occasionally a little warm, but totally worth it. Even more so if you are hearing impaired like I am.

Ron Burke is the Editor in Chief for Gaming Trend. Currently living in Fort Worth, Texas, Ron is an old-school gamer who enjoys CRPGs, action/adventure, platformers, music games, and has recently gotten into tabletop gaming. Ron is also a fourth degree black belt, with a Master's rank in Matsumura Seito Shōrin-ryū, Moo Duk Kwan Tang Soo Do, Universal Tang Soo Do Alliance, and International Tang Soo Do Federation. He also holds ranks in several other styles in his search to be a well-rounded fighter. Ron has been married to Gaming Trend Editor, Laura Burke, for 21 years. They have three dogs - Pazuzu (Irish Terrier), Atë, and Calliope (both Australian Kelpie/Pit Bull mixes).
Related Articles: Woojer
Share
Tweet
Share
Submit