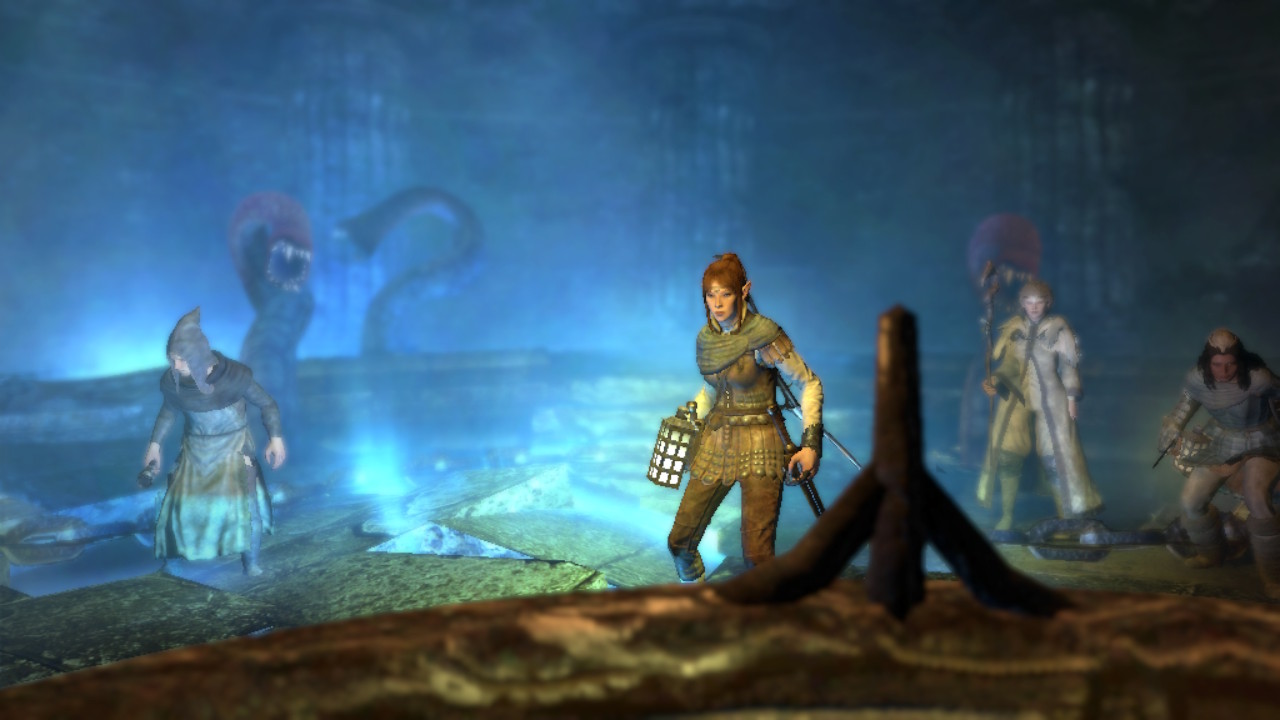 Dragon’s Dogma isn’t a new game, but seven years after its initial release, there’s still nothing else like it. Recently released on the Nintendo Switch, Dragon’s Dogma: Dark Arisen gives the game yet another chance to finally get the audience its fans have been insisting it deserves for years. If you’ve played the game before, this new release is exactly what you remember, plus a great handheld mode (and a few disappointing graphical hiccups). It also includes the Dark Arisen expansion, which has been standard in new releases of the game for years. If you haven’t played it by now, it’s an unmissable game with an expansive world, a handful of concepts that I can’t believe haven’t been copied ad nauseam by now, and some of the best RPG classes ever.

At first glance, Dragon’s Dogma looks like a pretty generic fantasy RPG. It takes place in Gransys, a land full of wizards, goblins, and all manner of other cliches. You play as the Arisen, the one chosen to slay a fearsome dragon by… uh, the same dragon. So, you won’t exactly be playing Dragon’s Dogma because of its excellent story, but it’s still nice to see it commit so completely to its dorky premise, from its chivalrous dueling knights to the Renaissance fair patois that everyone you meet speaks in. That being said, the story does go in some wildly unexpected directions at the very end, continuing even after it seems like you’ve beaten the game. 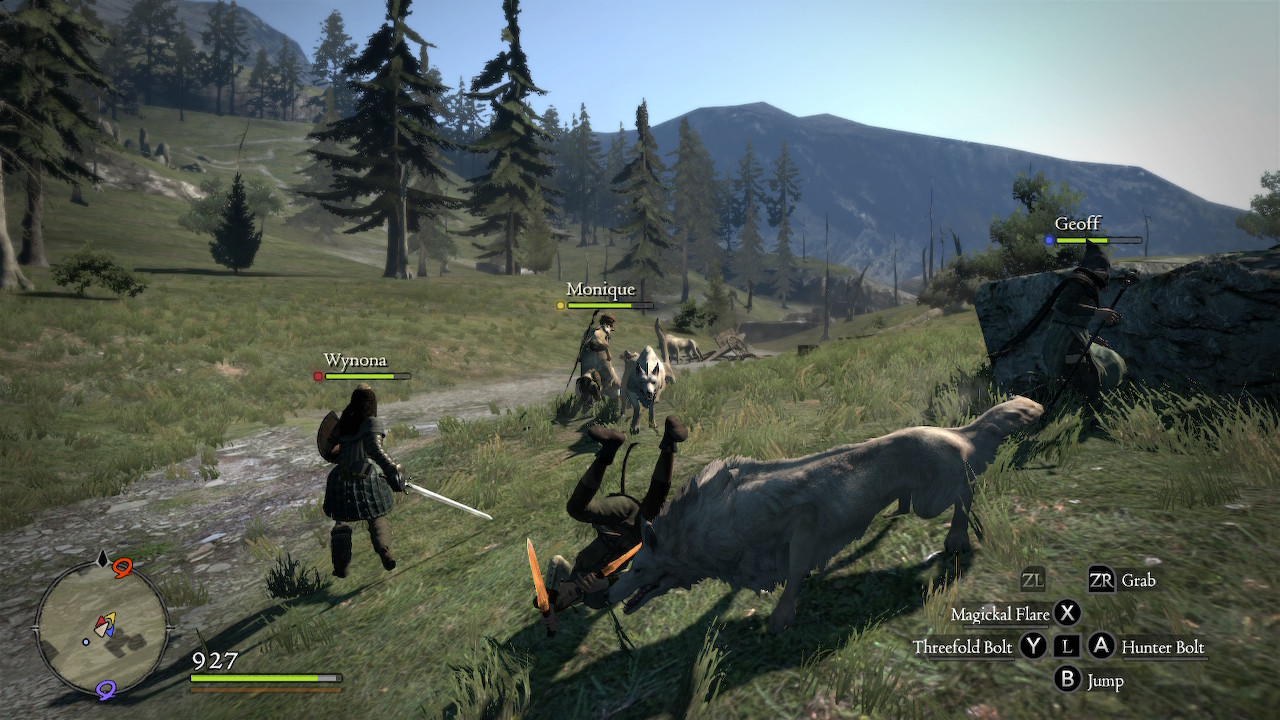 While most of the story isn’t anything special, combat in Dragon’s Dogma is fantastic. Each of its classes feels completely distinct from one another and from the classes in any other game. They range from quick archers that flit around the battlefield to sorcerers that are much less mobile but can summon tornadoes and meteors with lengthy incantations. You can swap classes and equip different skills any time you’re in town, and choosing the right ones lets you capitalize on enemies’ elemental and tactical weaknesses. You might take one set of skills when you’re going after harpies in open fields and another set to face undead warriors in winding caverns. The best encounters in the game are with giant enemies like chimeras that require you to not just use the right skills, but also strike at the right body parts. In these fights, you can even climb your foe to better get at their weak points. It feels so much more involved than typical action RPG combat, and if you do somehow eventually get tired of scaling cyclopes to stab them in the eye, you can always switch classes and use an entirely different playstyle.

You won’t be fighting alone, either. One of the most interesting parts of Dragon’s Dogma is the Pawn system. After completing the first few quests, you get the ability to summon Pawns, soulless humanoids who will follow you into battle to do your bidding. You get to make one Pawn on your own and you can recruit up to two more at a time by visiting a Riftstone. There are a handful of pre-made Pawns to choose from, but as long as you’re connected to the internet, you can also borrow Pawns from other players. If your own Pawn is rented out this way, they’ll come back bearing rewards, including a gift from the player who used them. 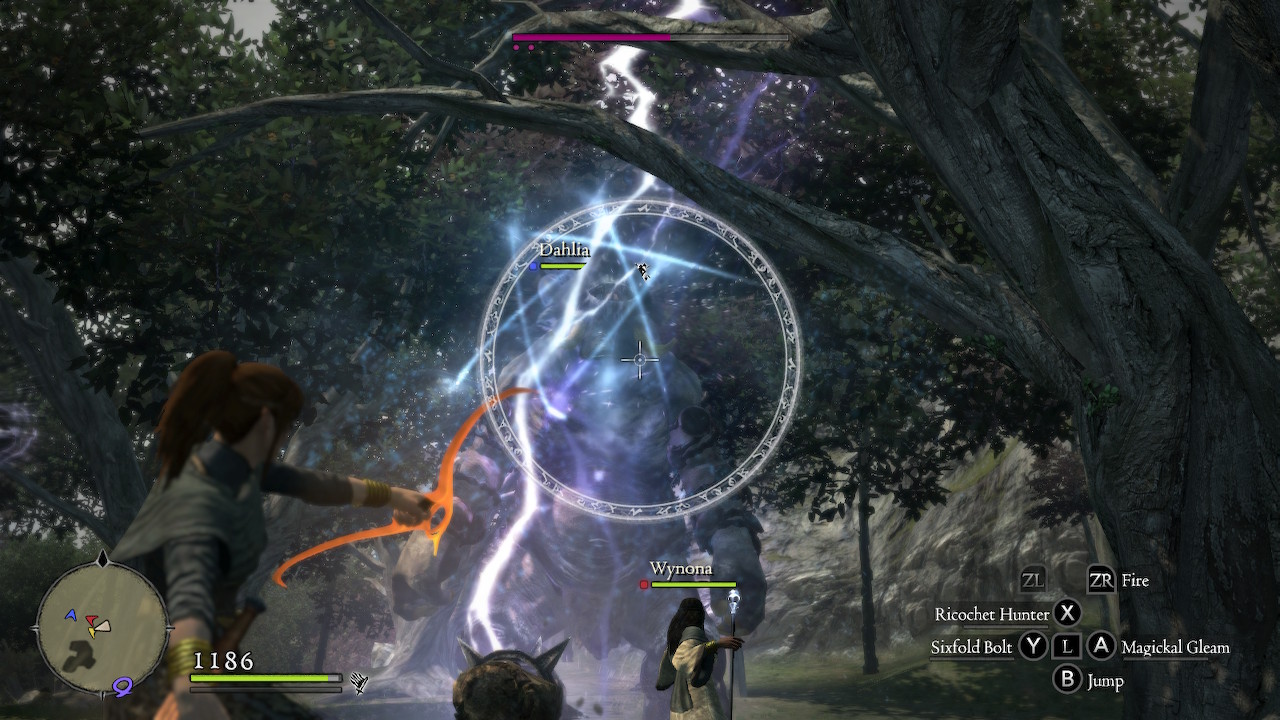 Using other players’ Pawns is a better choice all around, both because other players have an infinite capacity for making a range of gorgeous and grotesque Pawns and because they’ll bring knowledge from their own worlds. That sometimes means they’re more effective in battle against certain foes or can lead you around terrain they’re familiar with. A Pawn even taught me that the plural of cyclops is cyclopes. While it’s a cool system, it’s one of the parts where Dragon’s Dogma shows its age the most. Pawns can be unbelievably stupid at times, with Fighters routinely refusing to use their shields and Mages deciding the best place to launch fireball artillery strikes is six inches away from the raging troll they’re firing at. The commands you can give them are also extremely limited and it’s a coin toss whether they’ll listen to you at all. They also have a habit of endlessly shouting out the same dozen voicelines, embedding timeless wisdom like the fact that wolves hunt in packs and fire works well forever in your mind. Still, it’s a great system, and it sets Dragon’s Dogma apart from any other game out there.

Gransys may not be the most original setting, but I still found myself getting drawn in. The world is strewn with forts and caverns that all seem real and lived-in, like settings for stories that you weren’t a part of. Bandits gather at their camp, lizardfolk sun themselves on rocks near the water, and harpies roost in trees surrounded by the bones and rusted armor of their past victims. Meanwhile, laborers carry supplies from camp to camp on the roads you travel and nuns shelter in an abbey deep in a cursed forest. It’s nothing as complex as the ecosystem in Monster Hunter World or any immersive sim with different systems interacting with each other, but everything has its place in the world being built. 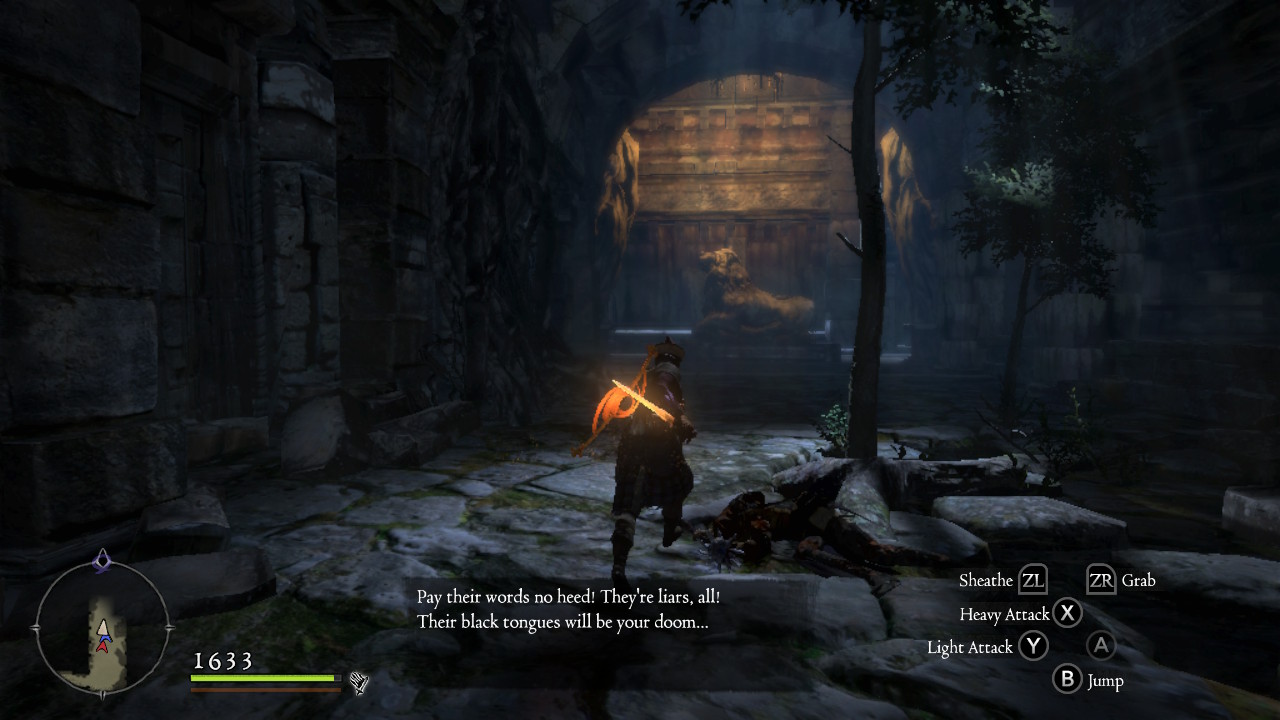 Dragon’s Dogma may be the best game I’ve ever played at making travel part of the fun. In so many games, the time you spend getting to your objective is more or less just a break in the action. Here, getting from place to place is where most of the game happens. Fast travel is extremely limited, letting you warp only to the game’s two towns and points that you place manually using rare items, so most of the time you have to hoof it to your destination. You’ll have to consider how to fill your pack for long journeys and always count on getting jumped by a cyclops or two along the way. Ambushes are frequent, especially if you veer off the road, and in the pitch-black nights of Dragon’s Dogma, even lowly enemies like wolves and goblins can be a real danger. It even turns its day/night cycle into part of the game, making you manage the oil in your lantern to keep the path illuminated, or rely on light-generating spells in a pinch.

The game’s Switch release does bring some quirks with it. I love being able to play in handheld mode, getting absorbed in the journey through Gransys. However, my favorite classes to play in Dragon’s Dogma are ranged characters and the joystick on the right Joy-Con doesn’t feel quite precise enough. The Switch also brings some technical issues I haven’t seen in other versions of the game. There were a few framerate drops and tight places where the camera got caught on walls, along with frequent terrain pop-in. None of this even comes close to ruining the experience, and in my opinion, it’s more than made up for by how great it is in handheld mode, but it does mean that this may not be the definitive edition of a game also available on PC and PS4 if you’re mostly playing docked. 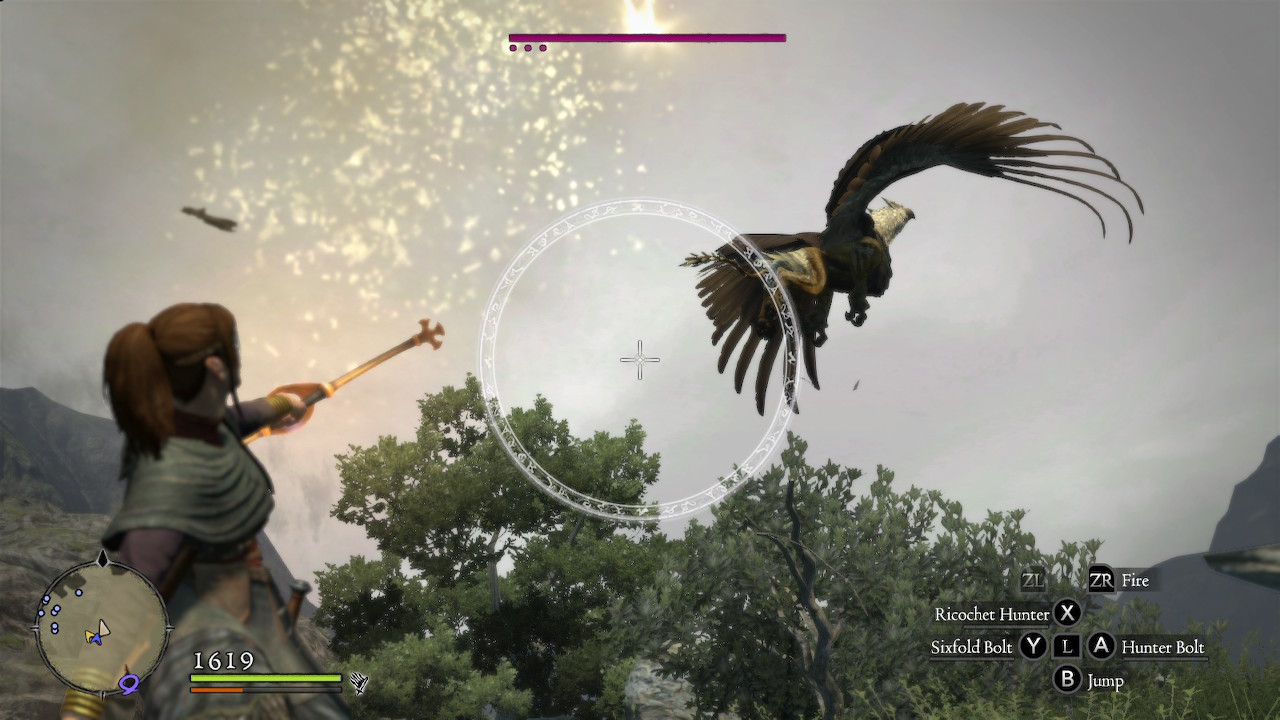 Dragon’s Dogma: Dark Arisen isn’t necessarily what I’d call a smooth experience. A lot of systems are obtuse or poorly explained, and it’s a tough game to pick up for a short play session, given how much of the fun comes from long expeditions and careful preparation. The Switch port does help with that, but Dragon’s Dogma: Dark Arisen is always going to demand a degree of patience that will turn some people off. Still, if you can deal with its sometimes slow pace and a few technical hitches, this port is a great way to find out why Dragon’s Dogma has a habit of turning people into rabid followers rather than just fans.

Dragon’s Dogma: Dark Arisen has already been released a handful of times on different consoles, and this port doesn’t add anything new. The ability to play in handheld mode is great, but this version also comes with some pop-in and framerate drops not present in other releases. Still, it’s worth it just to experience one of the most overlooked games of the decade again, or for the first time. If Dragon’s Dogma: Dark Arisen’s stellar combat, unique class system, and treacherous world hook you, its technical flaws are extremely easy to overlook.

A committed indoor kid, Bryan moved from Pittsburgh to Los Angeles for a prettier landscape to ignore. They can be lured outside with promises of taco trucks and film festivals, and enjoy trawling through used book stores for works on the occult. Bryan has been gaming since the SNES era and is a sucker for good pixel art.
Related Articles: Dragon's Dogma: Dark Arisen
Share
Tweet
Share
Submit