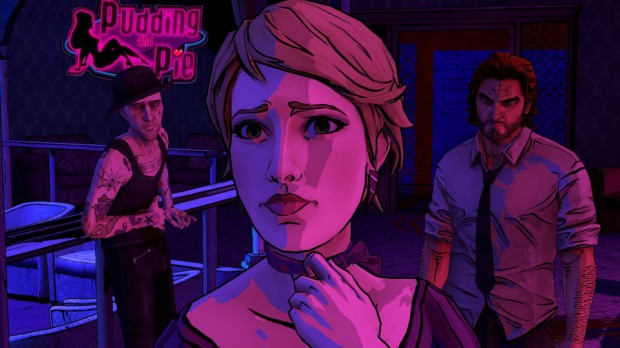 Telltale knocked it out of the park with their 2012 Walking Dead release. It flipped the point-and-click genre onto its head and made even the most monotonous tasks feel like they meant something. With this formula , many were interested to see how well it would transition into something outside of The Walking Dead universe. We all got the chance at finding an answer to that question when Telltale unveiled the first episode of The Wolf Among Us, a game featuring multiple fairy tale characters forced into one city, elegantly named Fabletown.

In The Wolf Among Us, you play as BIgby Wolf (The Big Bad Wolf), the sheriff of Fabletown, You begin your series of unfolding events by investigating a simple domestic disturbance. This disturbance quickly turns physical as Bigby gets into an altercation with the suspect at hand. Once the suspect has fled, you meet what seems to be the love interest, Faith. The first episode eventually wraps up with you finding Faith’s decapitated head laying on your doorstep. So begins your story.

The story has you going through the same gameplay motions players partook in through The Walking Dead as you walk around the environment on screen while moving the right cursor to highlight objects highlight interactive objects in the environment. These moments can lead to some of the more personal situations which involve the unique conversation system. This involves a timer counting down which forces you to make a decision on what to say in response to the topic at hand. This insistent timer increases tension and excitement and remains a fantastic addition to the point and click adventure genre. It increases involvement and attachment to each of the characters you run into during your time with The Wolf Among Us.

Many of The Walking Dead’s successes hinged on the plethora of interesting characters you ran into around each corner. This remained the case in the first three episodes of The Wolf Among Us as you began to see creepy details unravel regarding Ichabod Crane and a strong relationship form between Bigby and Snow White. These personal relationships became strained throughout the story as you have to make choices such as whether to send fables to “The Farm.” The Farm being a place where fables are forced to go if they cannot afford (or refuse) to be glamoured to look like normal humans. For example, one recurring case finds Mr. Toad, a simple little fable living with his son, struggling to get by on an everyday basis and ultimately, he cannot afford to have both him and his son glamoured. This ultimately leads you to making the tough choice of turning a blind eye or doing what is “right” for the city.

The point-and-click premise is so simple that relationships between characters have to be strong for a game like The Wolf Among Us to hold up. In this case, the relationships remain at the forefront of the story but not all of them hit as strongly as you would hope. As the story continued into Episode 4 “In Sheep’s Clothing” and Episode 5 “Cry Wolf,” more and more characters began to be introduced, while some of the previous stand outs of the series were forgotten.

In the first episode, you are introduced to Bigby’s best friend, a pig that refuses to be glamoured. Their first interaction you take part in is one that is both comedic and emotional, with neither being completely depressed, but both longing for something more than what they have. After that first episode, the pig is heard from three or so times, missing a golden opportunity at taking advantage of a wonderful character.

Thankfully, they do not always miss out on that opportunity which is shown by how your relationship develops with Mr. Toad. Him and his child play a very large part in helping (or sometimes hampering) your progress in solving the mysterious murders happening in Fabletown. You eventually go through multiple sequences that give you a glimpse into Toads backstory, which is one of little to no happiness, with the only real positive in his life being his always spunky and excited child. Ultimately, the decisions you make regarding Toad are some of the most affecting in the game. Even thinking back currently, I harbor a few regrets as to how I handled his situation.

As already stated, the characters introduced in Episode 4 and 5 seem to fall flat, which leads to a very anti-climactic ending. In a game based all around drawing the story out 6-8 months due to it being episodic, the conclusion has to be something special in order to leave the player feeling satisfied. The Wolf Among Us failed to do so due in part to a half-hearted and largely forgettable set of villains introduced in Episode 4. On top of that, the character development and strong relationship between Snow and Bigby came to a random halt.

One aspect introduced in The Walking Dead series that never clicked properly were the combat and action sequences, which typically involves hitting quick time events. While complaining about quick time events is a thing many have beat to death, it only becomes a serious issue when it is used excessively, which is the case later in The Wolf Among Us. It makes sense, as you fall deeper into the story, action-oriented events are going to begin happening more frequently. Unfortunately, when the conversations happening after those sequences are of equal boredom, there is no incentive to keep you invested in the action at-hand. Not only does it lead to a lack of interest, it makes you realize how frequent these cheap sequences are implemented.

Telltale struck gold with The Walking Dead, but it seems they merely struck bronze with a promising future in The Wolf Among Us. It has some wonderful characters and a lot of potential, but it fell apart as the season continued. It retains a lot of the charm and heart due to the excellent conversation system, but the action sequences are far too frequent and become a nuisance. While a Season 2 would be welcomed with open arms, Season 1 of The Wolf Among Us hasleft a tad to be desired.