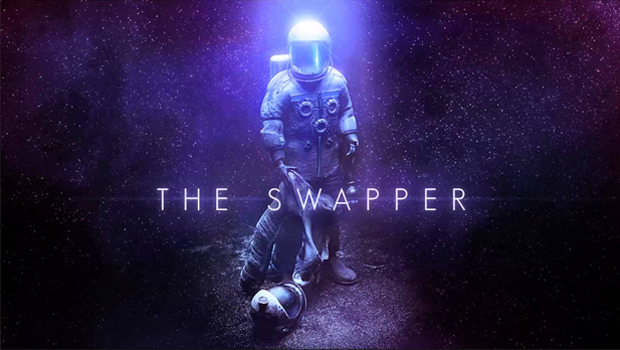 Who are you? What are you? Are you sure you’re even you? What would you do if you were trapped on an abandoned space station wielding a device that can instantly clone your body and transfer your thoughts? If you’re asking yourself these questions, you’re probably already playing the critically acclaimed sci-fi puzzle platformer, The Swapper. After multiple accolades and a successful debut on Steam and PC, Facepalm Games’ unique indie title is finally getting its first console system release on the PS3, PS4 and Vita, allowing a new batch of players the chance to ask the big questions.

Right from the get-go, I was immediately impressed by The Swapper. The visual style is unlike any video game that I’ve experienced. There’s a heavy mood and atmosphere that permeates from start to finish, and darkness covers large portions of every stage you explore, evoking the sensation of being trapped in the vastness of a dead space station. One main reason the visual style is so effective is that it is almost entirely created by real objects and stop-motion photography. Similar to the old PS1 platformer, Skullmonkeys, you are essentially controlling a claymation character inside a stop-motion world.

The entire mechanics of the gameplay is built around the use if a strange device called “The Swapper,” which allows its user to clone himself and transfer his consciousness between himself and his clone. The device can only create up to four copies of the user. Once it is created, each clone will completely mirror the movements of the user, meaning each time you jump, your clones jump too, and whenever you move forward or backward, so too will your clones, even if this action leads them to walk off a cliff to their death.

Most of the game’s puzzles involve the creation and control of clones in order to push buttons and maneuver obstacles so you can collect orbs that grant access to different areas of the base. In the classic style of Metroid or Castlevania, there will be points when you return to previous locations of the map in order to access new areas and progress. The puzzles are challenging, but they manage to toe that essential line of not being so challenging that it prevents it from being fun. I found myself eagerly approaching each new puzzle, and I always felt genuine sense of satisfaction as soon as I cracked it.

Besides the challenge of the puzzles, there is also a surprisingly deep and mysterious storyline that continuously entices you to keep going. As you move through the abandoned facility, you’ll uncover clues and insights that will eventually weave an imaginative story that any science fiction buff will surely appreciate. It’s a rare treat to play a game that successfully delivers strong and engaging story without a reliance on cut scenes; it actually reminded me of the first time I played through Bioshock. Your character is thrown into an unknown and alien environment that has already been decimated by a mysterious threat, and it’s your job to not only escape this threat, but also to figure out what happened.

As an added bonus, this game is launching on the Playstation network as a Cross-Buy / Cross-Play title for the PS3, PS4 and PS Vita. So, with a single purchase you can download a copy on any of your three systems and swap your saves intermittently between them. Curve Studios was in charge of the transfer from PC to console and, in all honesty, they managed to avoid a notable difference between any of the three systems. The rendering is somewhat sharper on the PS4, and the PS Vita does offer minor touchscreen options, but for the most part you’re going to get the same experience on any of the three systems.

In the current age of graphic-chasing and pixel-counting it’s nice to be reminded that intelligent puzzle designs, an engrossing story and a moody atmosphere can still add up to make an amazing game. If you’re a fan of science fiction and platform puzzle games, you’re going to enjoy the atmospheric experience of “The Swapper.” But if you’re looking for a way to switch your brain off as you lull it with explosive graphics… well, you’re probably not even reading this, so don’t worry about it.

The Swapper delivers on nearly every front. The puzzles are intelligent and challenging, the story is deep and philosophical and the visual style is incredibly unique and inventive. This is a title that is sure to satisfy fans of science fiction and platform puzzle games alike.