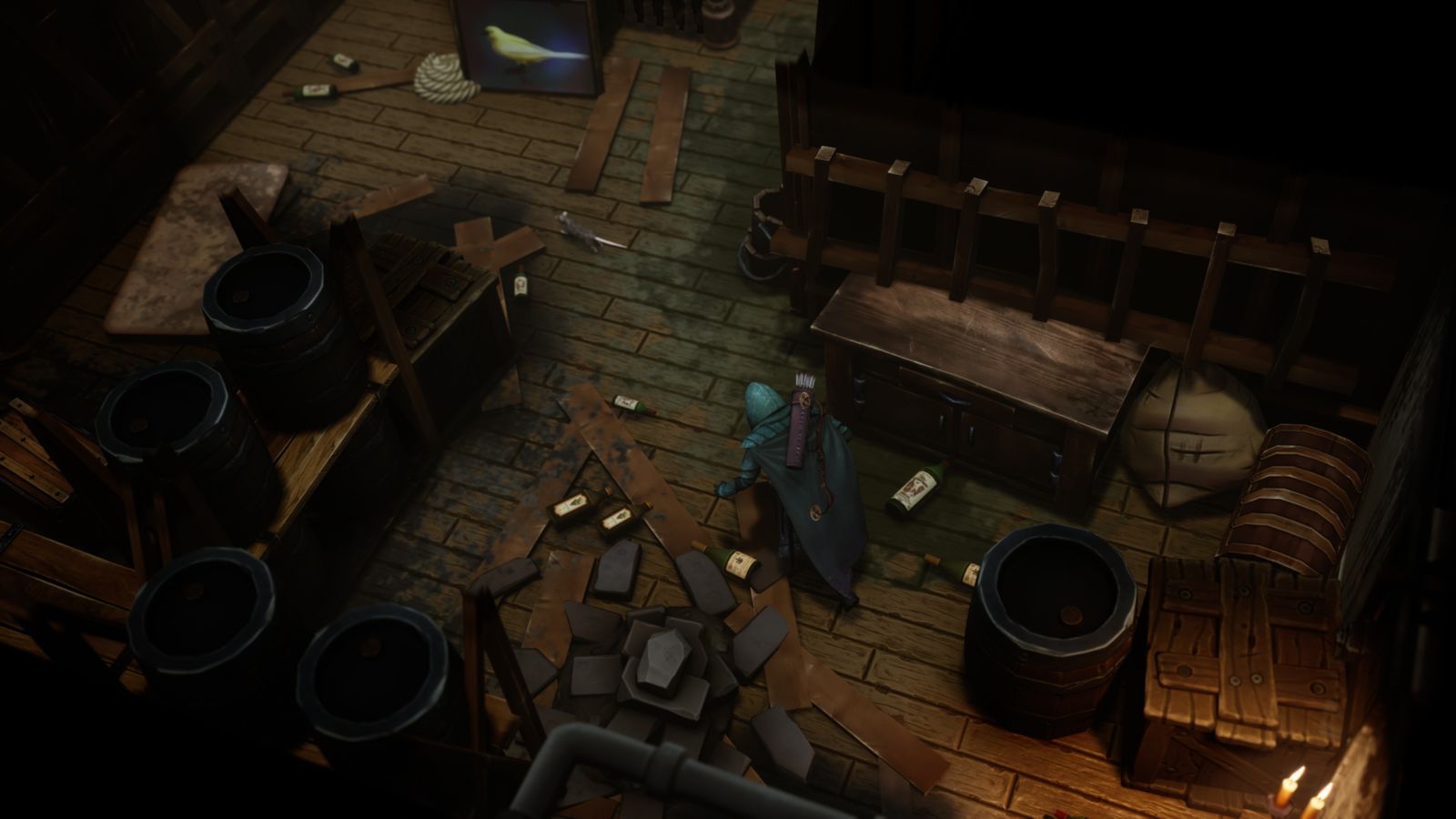 I’m a massive sucker for stealth games, especially now that they’re such a dying breed. If you’ve read my reviews before, you’ll know that these games are my bread and butter. I love them to bits, and it really sucks seeing them being trodden on and not living up to what they could be. So when I saw Winter Ember, I was intrigued. Sure, we’ve seen top-down stealth games in the past, but this one looked extra special. So, is it worth your time?

As always, we gotta talk about the story. It’s pretty cut and paste from most other hero-rising-from-the-ashes stories. You play as Arthur Artorias – a very rich kid who, after going to bed with two ladies, finds his entire family killed by some masked men. Narrowly escaping the clutches of death, he finds himself being mended by one of the ladies who was in his company. The years pass, and his vengeance grows thicker. Soon he finds he’s in the right shape, the right mindset to go and avenge his family. Now I’ll stop there because of spoilers of course. But the one thing I’d like to bring up here is that all of this happens in the introduction of the game, and is presented through animation. It’s gotta be one of the coolest, most interesting ways to tell a story before you’re given the reins and can experience the graphics and gameplay that’s on offer. The only issue is how unoptimized this section is. The audio doesn’t line up with the animation, so there were times when someone would die, I’d see them being stabbed, then the audio cued in a second later. Just jarring. 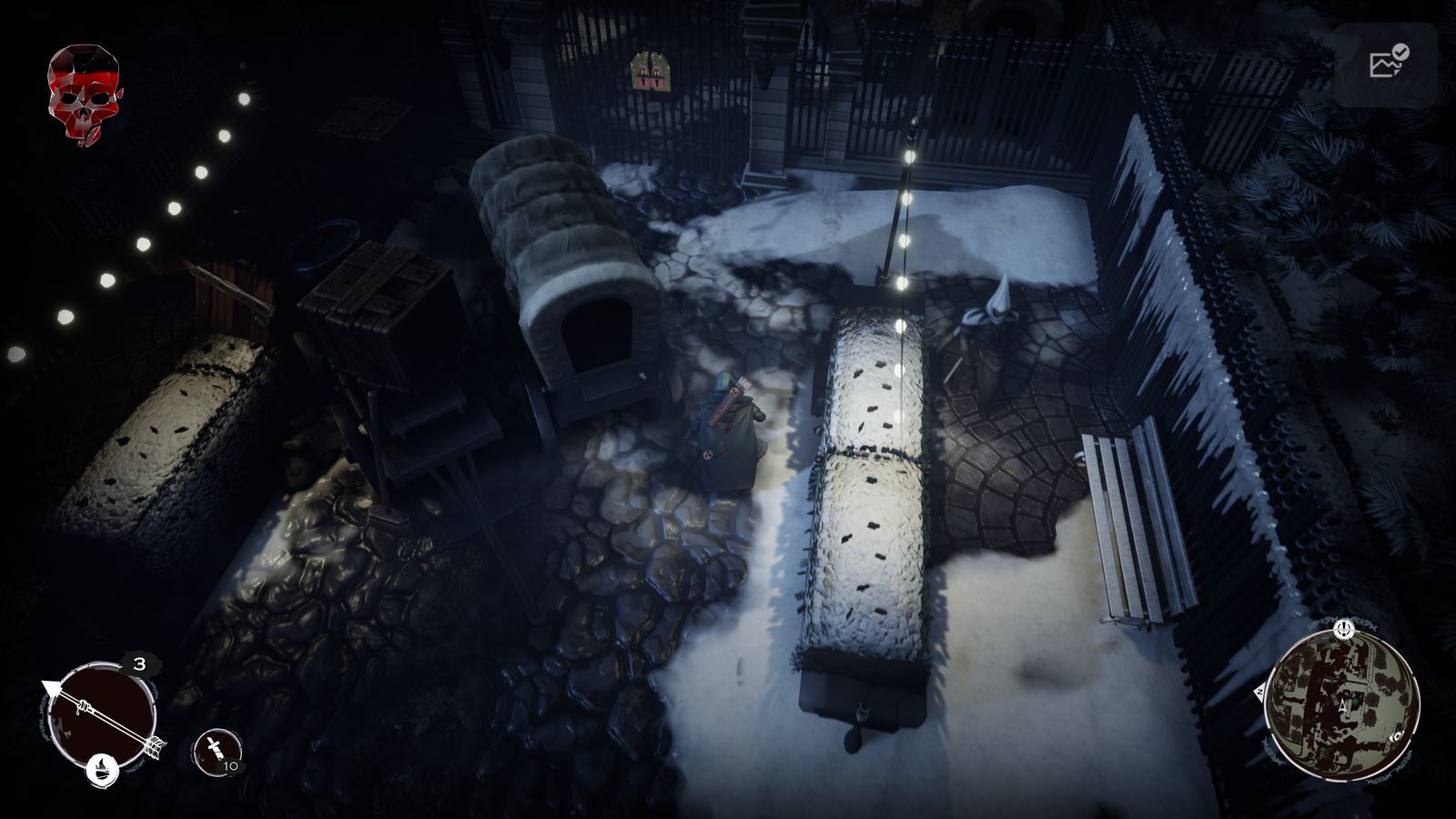 That being said, it seems that the entire start of the game is cursed. Even the sequence showing the development studio and the publishers was running at 20 frames per second. As soon as you’re granted control of the game, it seems to run rather slowly too. At this point, it felt like it was dropping from 60 frames per second to 30, and the only way to be given a solid framerate was when you were pointed at a large wall. Even with the power of the PS5, it felt like I was running an early PS4 game on the PS4, which is massively disappointing given that this was indeed a PS5 version of the game.

Nonetheless, let’s put the framerate to the side for a bit. The real interest I had in this game was the gameplay. Stealth is very difficult, even on the middle difficulty, yet it’s very rewarding. You’re given the ability to kill or knock out enemies (though you’ll find they’ll wake up after some time if they’re KO’d), and can perform this either with your bow and arrow or by getting behind your enemy. However, outside of stealth it’s a different story. I couldn’t find a more irritating sword fighting experience if I tried. You’re given two attack options here, light or heavy. As you can expect, light attacks can be spammed and heavy attacks need to be charged. You’re also given a blocking meter, one that is extremely broken. You’ll always win fighting one-on-one, you just need to hold L1 down to block and spam R1 to attack. If they attack you mid-swing, don’t worry, your guard will instantly be brought up and you won’t take any damage. There should be some latency between swinging and blocking to make it more fair and balanced. Even then, though, there’s not much else to the combat other than spamming attacks. Enemies take ages to throw an attack, so you can land a heap of shots before you need to block. Parrying is an option, but it might as well not even exist. The window to parry is tiny, and it’s even harder to see since the camera is so far away from Arthur. It’s a very basic sword-fighting experience, and it doesn’t seem that much effort was put into this. It’s a shame because it felt like I was punished having to experience this form of gameplay every time I was caught out of stealth — and I doubt that was the true intention of Sky Machine Studios. 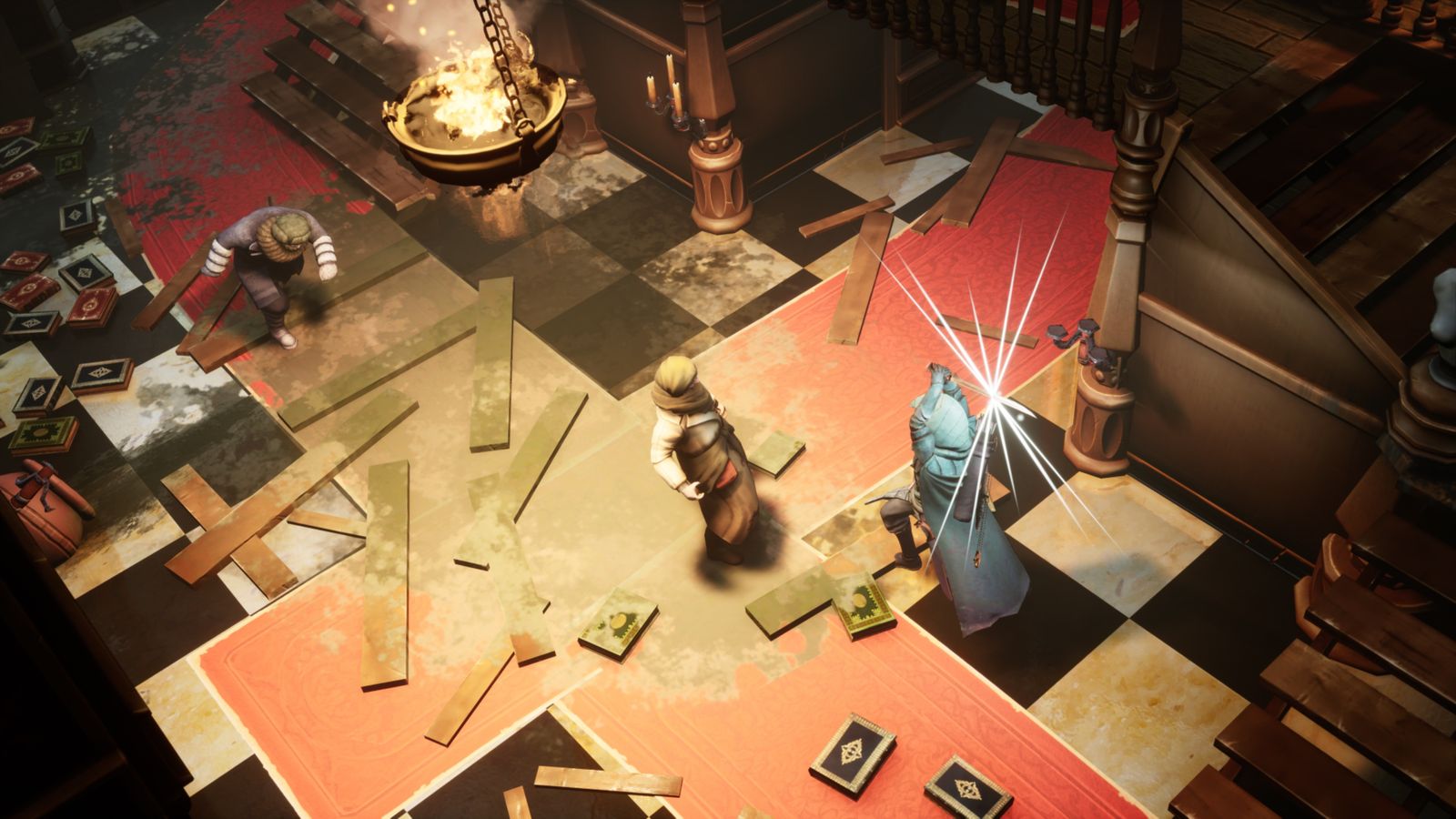 The one thing I really loved about this game was the versatility of the arrows, and how they’re extremely important outside of combat. Most games, like say Skyrim, sees you use your bow to deal damage… and only damage. Outside of combat, it’s useless. In Winter Ember, your bow is the key to solving almost every puzzle in the game. You can build rope arrows to climb certain points around the game or shoot electric arrows to power up generators to open gates and blast doors. Use a fire arrow to burn an enemy, or use it to burn down a hedge so you can pass through it. The game also does these moments right, it doesn’t tell you what you need to do — you just need to find it. Granted, stuff like burning hedges and powering generators is obvious since, when you get close, they emit an outline indicating they’re interactable. But, to discover that on your own and without the game telling you to “shoot a rope arrow to reach the second floor of a building” is so important. It was so easy to get immersed in the game when I’m the one in control of what path I’m to take, or what way I should solve a certain problem.

Speaking of puzzles, that’s what you’ll be spending half of your time outside of combat doing (the other half being, well, traversing the world). Now that’s a very barebones way of looking at the game, and it’s not necessarily a bad thing. The puzzles are a great filler while you’re out and exploring what Winter Ember has to offer. They’re all really enjoyable, and I didn’t necessarily find them getting repetitive after a while, which is a major plus. Some puzzles might be basic, like hunting down a code to a safe or finding your way into a locked room. Other ones will have you ransacking a home for information, finding hidden rooms and locked chests, just so you can progress a storyline. I really enjoyed the quality of content on offer here, and it seems that Sky Machine Studios made sure to put a lot of love into this bit. It’ll be gratifying to know that it’s paid off. 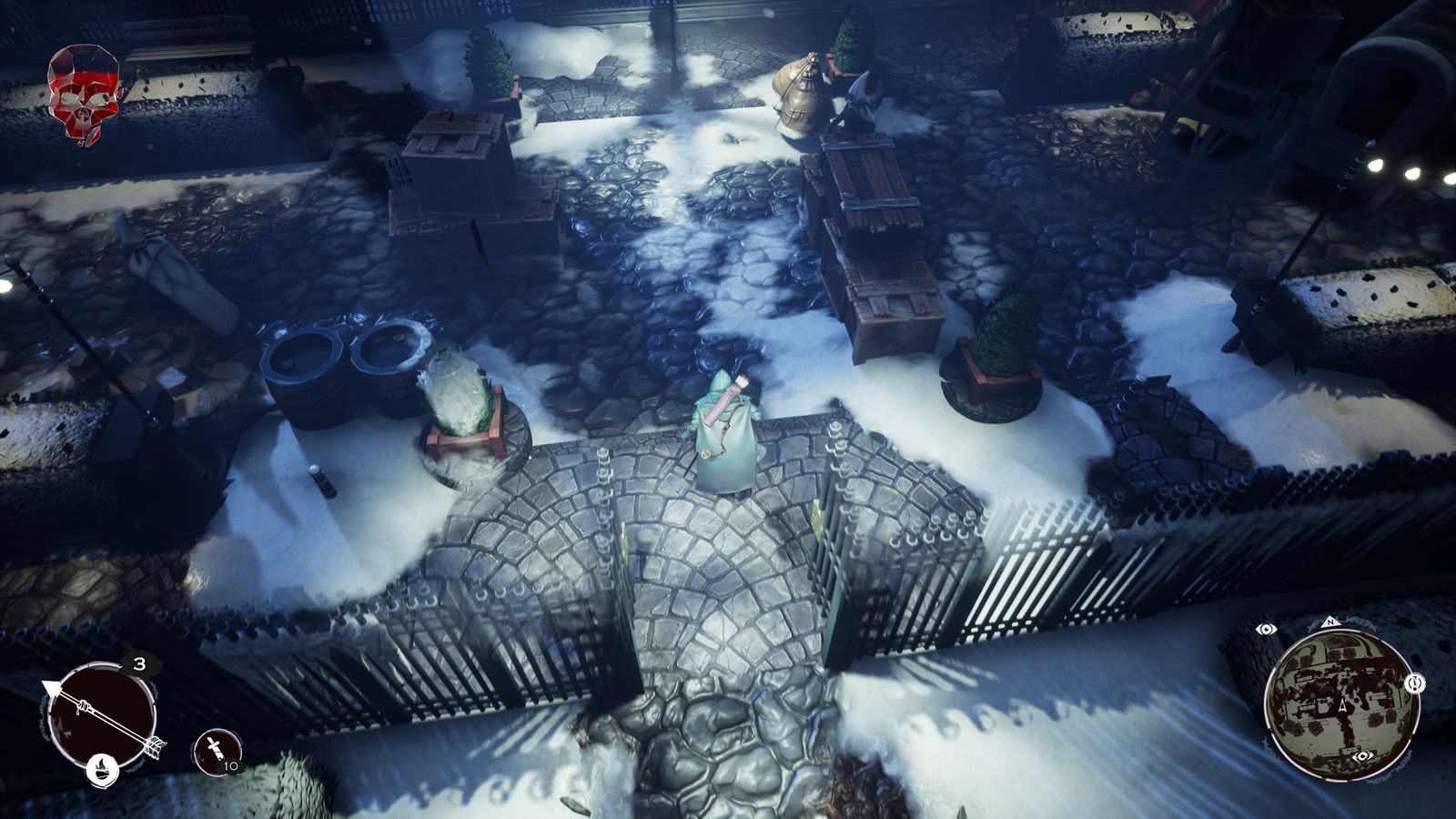 Now while there’s quality gameplay, that doesn’t necessarily extend to stuff like the voice acting. Granted, the script is pretty bad. There’s a lot of meaningless squabble in the dialogue that can come off as repetitive or uninteresting. Hell, even the NPCs seem to say the same 3 or 4 things over, and over. So the dialogue isn’t written well, that’s for certain, but the voice work doesn’t seem to help that out either. At times it comes off extremely dry and the characters just don’t bounce off each other in conversation. I know most VA work is done solo and without the cast nearby to make the conversation seem natural, but this was so jarring that it had to be brought up.

Another problem I had with this game was how basic the music was. Every time you were out of combat you heard the same bit of soundtrack, no matter what part of the world you were in. If you were in combat, you’d hear the same repetitive sound as well. Games like Splinter Cell: Chaos Theory put games like Winter Ember to shame with their soundtrack; each area has a distinctive musical tone and you knew when crap hit the fan. In Winter Ember, it was just annoying to have to listen to that jarring melody over and over if and when you did fall out of stealth.

Winter Ember was a really solid effort into the top-down stealth genre. When you’re in stealth and exploring, you really do feel like an assassin in a fantasy world and are carving your own name in it. But, outside of stealth the game is a shell of itself. It feels like stealth and exploration was the most important element of Winter Ember, which is understandable — but a lot of other gameplay elements were sacrificed just so that that could be achieved. Still, this is definitely one to try out and smash out in a few days and one I’m certain you’ll have a blast with.

Winter Ember is good, but could be better. The voice acting and script made me extremely disinteresting in the story, and combat is just so extremely dull. It doesn't help either when the soundtrack overheard in all areas of the game is equally as basic. These three things made the game lose a bit of its charm, but that’s all mended together thankfully by the enjoyable stealth mechanics and moment-to-moment gameplay. As a pure stealth experience, this game fast became a highly enjoyable experience overall, and one that I’d recommend if you can get past its big issues.

With a deep interest in writing, Ben followed that into a Journalism degree. As an avid lover for gaming, he is constantly expanding his library with console, PC, and VR games. He's obsessed with stealth games and loves hunting down the smallest of details inserted by devs.
Related Articles: Winter Ember
Share
Tweet
Share
Submit