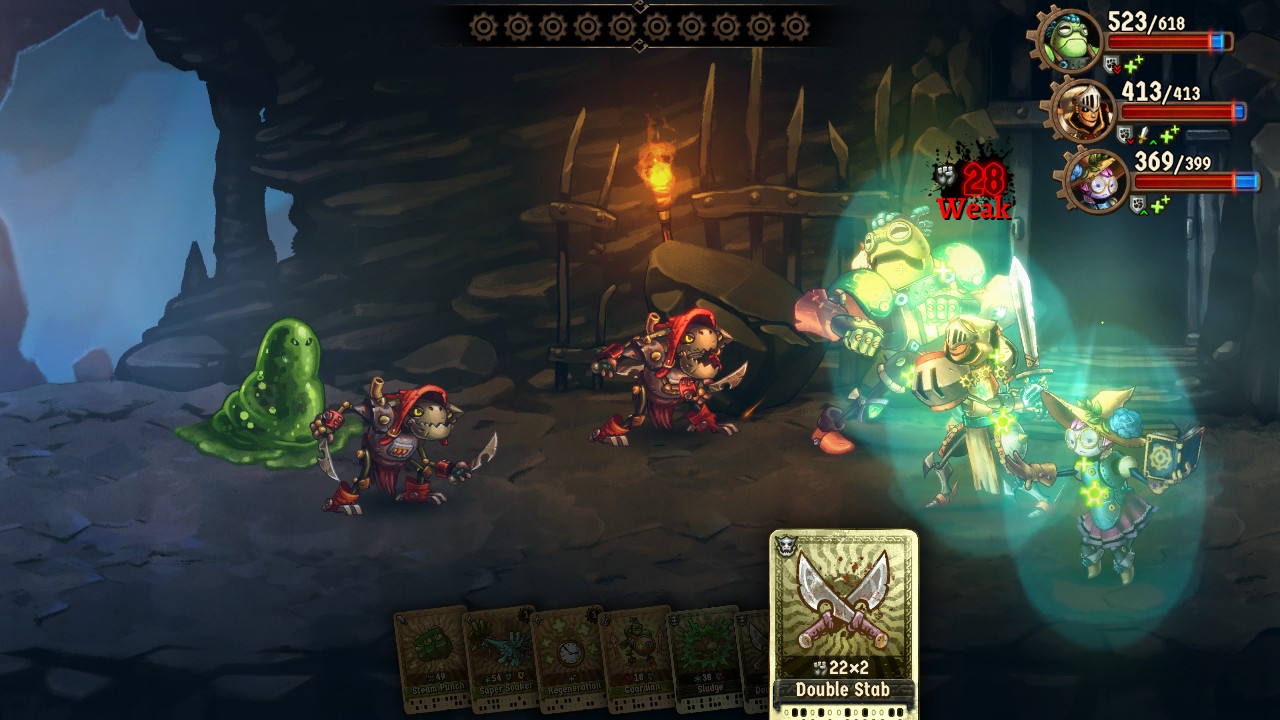 Image & Form Games may not usually top the list of people’s favorite developers, but with every game the studio releases, it’s building its case for being one of the most consistent in the business. Every few years, a new Steamworld game appears, and while none have taken the world by storm, they’re all tightly crafted, mechanically inventive takes on familiar genres that haven’t disappointed yet. Steamworld Quest: Hand of Gilgamech continues that trend, and while it may not rocket Image & Form to super-stardom, it’s yet another win for the developer, and it may make a few folks who are normally turned off by card-based combat reconsider the genre.

Between Steamworld Quest’s announcement and its release, Image & Form described the game as being (I’m paraphrasing here) a unique take that was unlike any previous card game. I immediately wrote that off as nothing more than a marketing pitch, but having played it, I have to agree. That’s not to say that Steamworld Quest is necessarily the best card game out there, but it approaches essentially every aspect of the genre in a novel way. 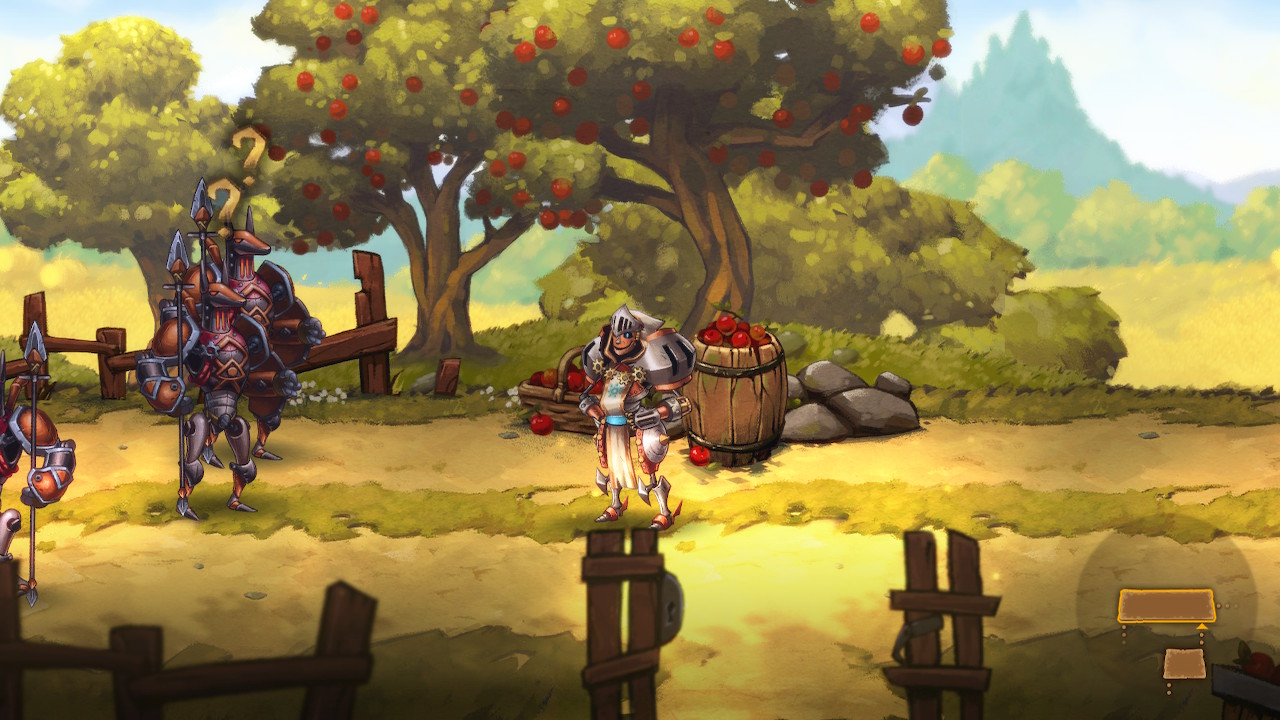 To start, Steamworld Quest isn’t a pure card battler. Before you ever draw a hand, you’ll first have to find your opponents on an overworld map. You explore Steamworld Quest’s world in a series of 2.5D side-scrolling sections. There’s not much to these areas; you can uncover hidden chests or hack up the scenery to find coins, but otherwise you mainly just walk through them to find enemies. In later stages, this structure lets you choose a path to avoid certain enemies or solve some light puzzles, but it’s a minor part of the game. I wish these sections had been developed more, but as they stand, they provide a nice break in the action and allow time for the game’s charming, whimsical story to unfold, complete with loads of Image & Form’s signature corny humor. Don’t go in expecting the kind of epic story you’d find in a traditional RPG, though. What story there is consists mostly of banter between your party members that adds character, but isn’t the real draw of the game. Once you do find an enemy, you can initiate a battle by simply walking into them, or perform a sneak attack, which will do a bit of damage to them before the fight even starts.

In combat, your team and the enemy team take turns playing cards, just as you’d expect, but it doesn’t play out like any other card game I can think of. Each character in your party (you start with two, but quickly add a third) must have eight cards in their hand at all times. Some cards, like basic attacks or simple defensive abilities, can be played at will, but more powerful cards require “steam,” which you build by playing those free cards. Every turn, you draw up to six cards and can play a maximum of three. If you play three cards from the same character, they also perform a bonus move determined by their weapon. This can be a special attack, a group heal, or a powerful defensive spell. Planning your turn around this bonus move is almost always a good idea, but you may want to break the chain for special combo cards that increase in power if you’ve played a card from a specific ally in the same turn. 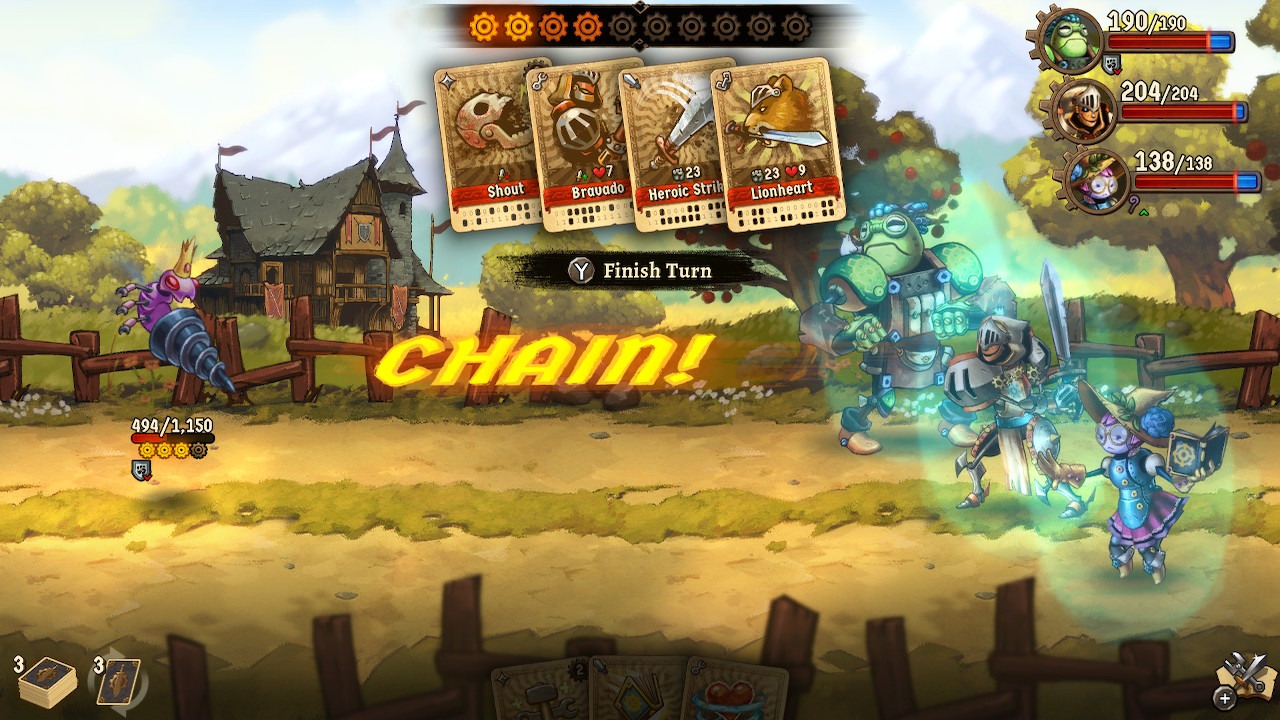 The basic mechanics of battle are simple, but they lead to increasingly complex tactical decisions based on your enemies’ powers and weaknesses, and by the end of the game, you have a bewildering array of options. Steamworld Quest does a good job of slowly introducing new concepts, cards, and characters, so it never feels completely overwhelming. It does start to feel unwieldy, though. Even if you never swap out your default party with characters you meet later, you can still completely change your options in combat by changing their equipment and cards. Making sure you’re using the right equipment and stocking your deck with a good balance of free and steam-based cards, offensive and defensive abilities, and elemental attacks becomes absolutely essential later in the game. It can be a lot to take into account, especially when a single area can have enemies with diametrically opposed weaknesses. Bosses battles in particular will test both your ability to prepare and to play with the hand you’re dealt. While it’s often possible to use even a non-optimized setup to get through a tough battle, there are definitely some encounters that feel all but impossible without the right tools. I had great moments in the game on both ends of the spectrum — eking out a victory against a foe that I felt completely outgunned by and waltzing through a tough enemy with a perfectly tuned hand. If you do take the time to prepare, you can put together some incredible combinations that will absolutely destroy your foes. Players with a penchant for min-maxing will undoubtedly find some devastating card configurations.

The same diversity in enemies that makes Steamworld Quest so engaging can also make it somewhat of a slog, though. One thing I appreciate about the game is that, unlike so many other card battlers, it’s not as much about crafting the perfect deck or exploiting some deep knowledge of cards’ synergy to make unbeatable combos. It’s more about looking at the challenge in front of you and deciding how best to tackle it with the tools you have in the moment. On the other hand, some areas are absolutely brimming with different combinations of enemies that make optimizing your deck nearly necessary to win. Perhaps the single biggest thing that I wish Steamworld Quest included was a way to save and switch between different hands and equipment loadouts on the fly. Without it, I often found myself just trying to power through sections with what I knew wasn’t the best setup just because I couldn’t be bothered to completely change what I had equipped between each battle. 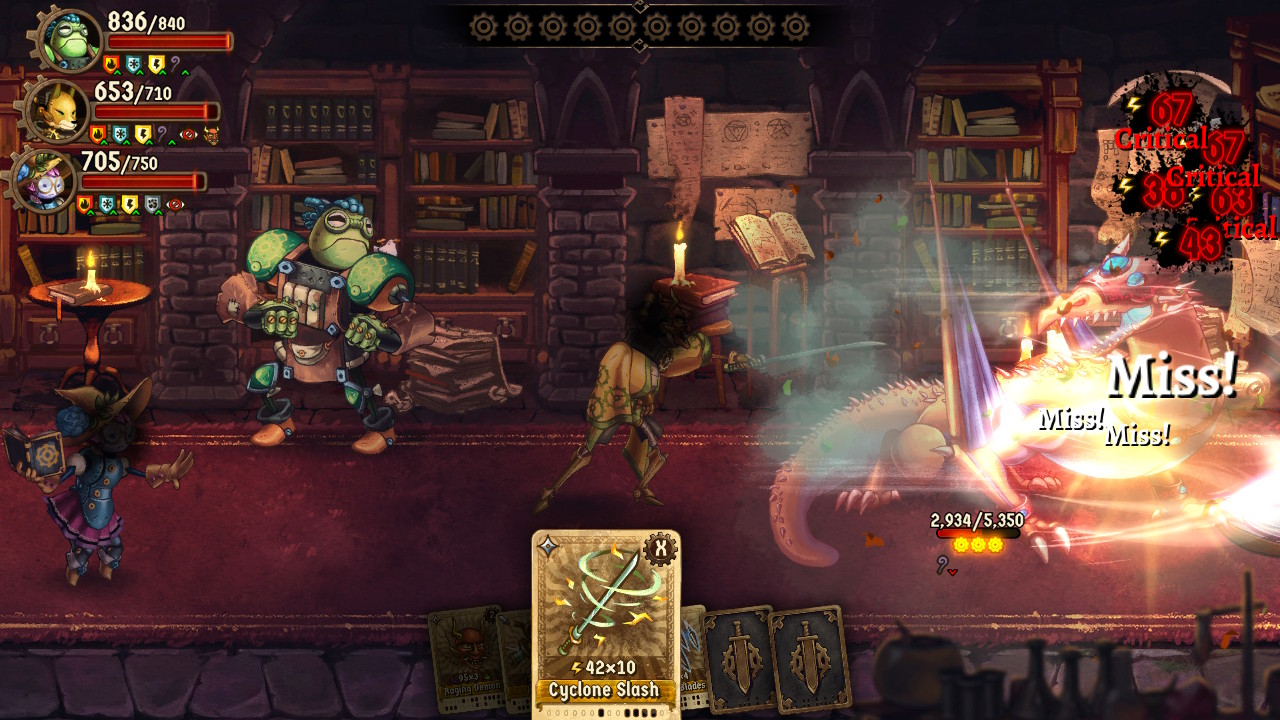 My only other big complaint with the game is that it doesn’t do the best job telling you about your enemies. It takes just a few too many steps to read their basic stats, as you need to open a menu, select the status option, then scroll over to your enemies. That may not sound like a lot, but when you’re trying to keep track of weaknesses and resistances for four enemies in a battle, and even more in the surrounding area, you’ll end up spending a lot of time in that menu. Even then, you can’t get full information about what each of their cards does, though it’s usually made obvious just through their effect on the battlefield.

Steamworld Quest is an easy game to recommend, though it doesn’t have nearly the longevity of other card combat games. While it does include an arena mode where you can fight through waves of enemies, its main appeal is battling through the story. Without the deep randomization and deck-building of more traditional card games, there’s not a whole lot to keep you hooked once you’ve beaten it, though there’s definitely some appeal in returning to play at higher difficulties and working out more complex strategies. It might make more sense to look at Steamworld Quest not as a card combat game at all, but as a light RPG with a terrifically inventive battle system.

Steamworld Quest: Hand of Gilgamech is a creative infusion of card-based combat with a traditional RPG. It plays entirely unlike any other card combat game, and it’s worth a look even for those who don’t generally like the genre. While it’s light on story, less replayable than other card games, and could use some refinement when it comes to building decks and equipping characters, it’s still a fun twist on a familiar concept that’s easy to recommend.

A committed indoor kid, Bryan moved from Pittsburgh to Los Angeles for a prettier landscape to ignore. They can be lured outside with promises of taco trucks and film festivals, and enjoy trawling through used book stores for works on the occult. Bryan has been gaming since the SNES era and is a sucker for good pixel art.
Related Articles: Steamworld Quest: Hand of Gilgamech
Share
Tweet
Share
Submit