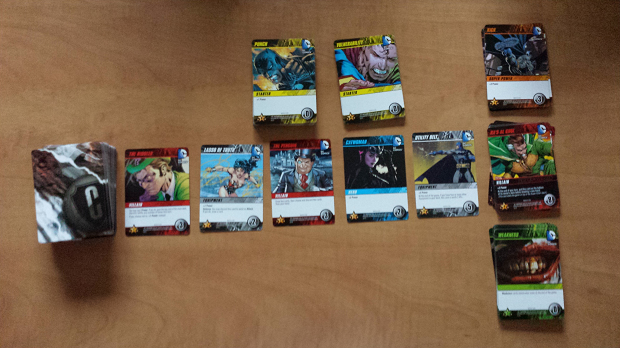 I’ve been a fan of deck-building games since Dominion served as a gateway into the world of board gaming a couple of years ago. Since then, I’ve cooled a bit on my love of Dominion (long story), but I still love the idea of a deck-building engine. I was vaguely aware of some other deck-builder games out there, like Thunderstone and Ascension, but, for whatever reason, I’d never played any of them outside of the Dominion expansions. However, that all changed when I heard about the DC Comics Deck-Building Game. I’m a huge comic book nerd, and DC publishes my superheroes of choice, so I finally had a good excuse to dive into another deck-builder.

When you publish a game where the theme is the major selling point, you had better get that theme right. So let’s take a second and talk about the theme. The premise behind DC Comics Deck-Building Game is that players play as superheroes that are out to defeat supervillains. Each hero has a unique superpower to aid in their battle against evil. They receive a special oversized card at the beginning of the game which identifies the hero and explains the special power. The heroes take to the streets and defeat minor bad guys, recruit other heroes, and acquire powers and equipment, becoming more powerful along the way. Eventually, the heroes become powerful enough to start defeating supervillains. The hero who gains the most victory points by defeating supervillains and accumulating main deck cards is the winner.

This setup does present a bit of a thematic quandary. All of the extra cards (equipment, superpowers, etc.) are themed after the different heroes’ super powers, villains, and equipment. So there are some cards in the deck with a Wonder Woman theme, some with a Superman theme, and so on. But because all of the cards can be gained by any hero, you can run into continuity issues. For example, you could have Wonder Woman using the Batmobile to defeat the Aquaman villain Black Manta. I can see where people might find this wonky, but it doesn’t bother me. The real joy of this game is being able to play with my favorite characters and look at the cool artwork, so a minor thematic glitch doesn’t hurt the game at all for me. Be warned, if you are Crazy Theme Guy, Protector Of Thematic Continuity, you are going to be irritated. Not as irritated as Batman at an NRA meeting, but irritated nonetheless.

Good theme or not, a game is nothing without good gameplay. The heroes begin with a basic deck consisting of low-power punch cards and neutral vulnerability cards. The main deck is placed in the middle of the table, and a lineup of five cards is dealt from it. Piles of kick cards, weakness cards, and supervillains are placed next to the lineup. Ra’s Al Goul is always turned over as the first supervillain.  Players deal themselves a five card hand from their deck. On their turn, they play cards from their hand and add up the amount of power from the cards they played. Each card in the lineup, a kick card, and the supervillian card has a cost. Players are able to buy any cards that they can afford. All of these cards provide more power, victory points, and special actions to the player who purchases them. Supervillains are much more expensive than most of the other cards, but they provide more victory points and better benefits than the other cards. Players can only defeat one supervillain at a time. Once the player is done buying cards, the player’s cards and any purchased cards are placed in a discard pile, and the player deals another five card hand from his or her deck. Play then passes to the next player. When a player’s deck runs out, the player shuffles the discard pile and begins a new deck. Play continues in this way until all the supervillains are defeated or the main deck runs out of cards.

I enjoy games with multiple paths to victory more than games where each player is trying to win the same way every time. On the surface, DC Comics Deck-Building Game provides players with more than one way to win. Cards with low cost provide low power, victory points, and benefits, while more expensive cards, especially supervillains, provide higher power, victory points, and benefits. A deck with lots of low quality cards will provide lots of hands of low quality cards, while a smaller deck with high quality cards will consistently provide hands with high quality cards. Theoretically, players could employ two strategies: 1) Buy every possible card and attempt to win through volume. Yes, there will be plenty of mediocre hands, but all those cards with one and two victory points add up. Besides, there’s bound to be some hands that score high amounts of power and enable one to purchase the odd supervillain. 2) Be very selective about the cards one purchases, trying as much as possible to have a lean, mean deck with lots of powerful cards and no fluff. This will result in many hands with lots of power and enable the player to buy even more high quality cards. Sadly, some variation of strategy 1 has won the game every time I’ve ever played. There are so many cheap cards in the game that they simply overwhelm any attempt at a lean quality deck.

Does this ruin the game for me? No, not really. After a couple of plays, everyone figures out the winning strategy, and they just go at it. Besides, I like the theme so much that I’m willing to give some grace. Like I said, superheroes, yo! But I can’t pretend that there’s anything new or clever going on here either. It’s a deck-builder that’s similar to others that you’ve probably played before, but it’s got a superhero theme. And it’s fun. It’s pretty dang fun. If you are the kind of person who will have fun with a superhero theme, and you aren’t tired of deck-builders, then you’ll probably enjoy DC’s Deck-Builder. But if you are looking for something that’s never been done before, it’s best to look elsewhere.

Coming off the commercial success of the DC Comics Deck-Building Game, Cryptozoic has released the follow-up, Heroes Unite. Heroes Unite is a standalone game that can be played by itself or combined with the original for a giant deck building extravaganza. Heroes Unite consists of seven new hero cards, new supervillains, and 114 all-new main deck cards. It also features new artwork on the kick, vulnerability, punch, and weakness cards. Other than that, it’s the same game. This kinda surprised me at first, as I expected some sort of new twist in the rules or the addition of some new aspect of the game. But I double checked the rules, and nope, there’s nothing new here. I thought the artwork in Heroes Unite was a definite step down from the art in the first game. This is particularly disappointing in a game where the artwork is one of the main selling points. These two legitimate gripes aside, the game is still as fun as the first one, and there’s no reason why someone who enjoyed the original wouldn’t enjoy the sequel. Since the games are so similar, many owners of DC Deck-Builder will find Heroes Unite to be unnecessary. Completists, like myself, won’t be able to help themselves and will be rewarded with new heroes to play and supervillains to defeat. The idea of blowing it out with a massive game consisting of both full decks sounds like a ton of fun, too. DC Heroes Unite is a sequel that brings nothing new to a game that brought nothing new to the table in the first place. But again, the combination of fun theme and breezy gameplay makes this game a mild winner for me.

These games don't bring much new to the table, but I didn’t mind. These are games for comic book fans, and comic book fans should enjoy them. The theme is pretty solid, and the artwork looks great. Er, the art looks great in the first one at least. Hard core gamers who aren’t impressed by theme may wish to avoid this series, as they’ve probably played similar deck-building games.