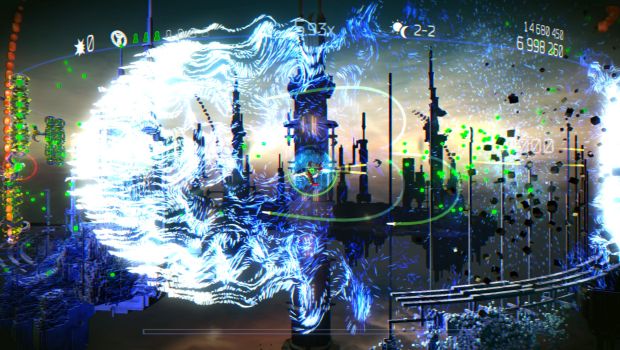 When I originally reviewed Resogun, I deemed it a premier launch title for the PS4. It’s a fast-paced side-scrolling shooter with beautiful visuals and an electrifying soundtrack. It also makes for a fantastic co-op (local co-op, in particular) experience, which gives it major brownie points in my book. With the release of the Heroes DLC, we’re given a new stage called Avernus, two new gameplay modes, new enemy types, touch-ups to the leaderboards and a ship editor, all of which make for an excellent excuse to revisit the game.

If you weren’t originally a fan of Resogun, the new content won’t change your tune. However, if you did enjoy the vanilla offering, you’ll certainly get a kick out of the new Survival and Demolition modes. Survival mode introduces day/night cycles which segway into new phases, or days, of the stage, and gives you but a single life before ending your progress. It serves as the game’s “hardcore” mode and proves to be an exciting alternative to the standard Arcade mode.

Demolition is where the usual formula takes a major twist; all of your ship’s regular arsenal is replaced by the ability to create an explosion within close proximity of your ship. The explosion is used not only to destroy surrounding enemies but trigger wrecking balls that destroy everything in their path, including your own ship. There are various power-ups throughout the level, most importantly extra wrecking balls, that intensify the chaos in your favor.

The ship editor may prove to be the star of the show for some, as it’s certainly an intuitive toolset that anyone can pick up and begin designing ships with. For people (like me) who have no interest in designing ships, you can go online and download ships that others have created. You’ll find no shortage of interesting and creative designs such as Yoda and Walter White’s face.

Heroes proves to be a humble offering, it will give fans who were pining for more Resogun some great new content, but it isn’t attractive enough for anyone who had closed the book on the game in the first place. The overall feel  hasn’t changed much and I was left with a sense of “been there, done that” as I played. If you’re just looking for more good ol’ Resogun, you can’t go wrong with Heroes.

The Heroes content gives fans a reason to play Resogun again, but anyone who was ready to move on or didn't enjoy the game in the first place may not find it reason enough to come back.