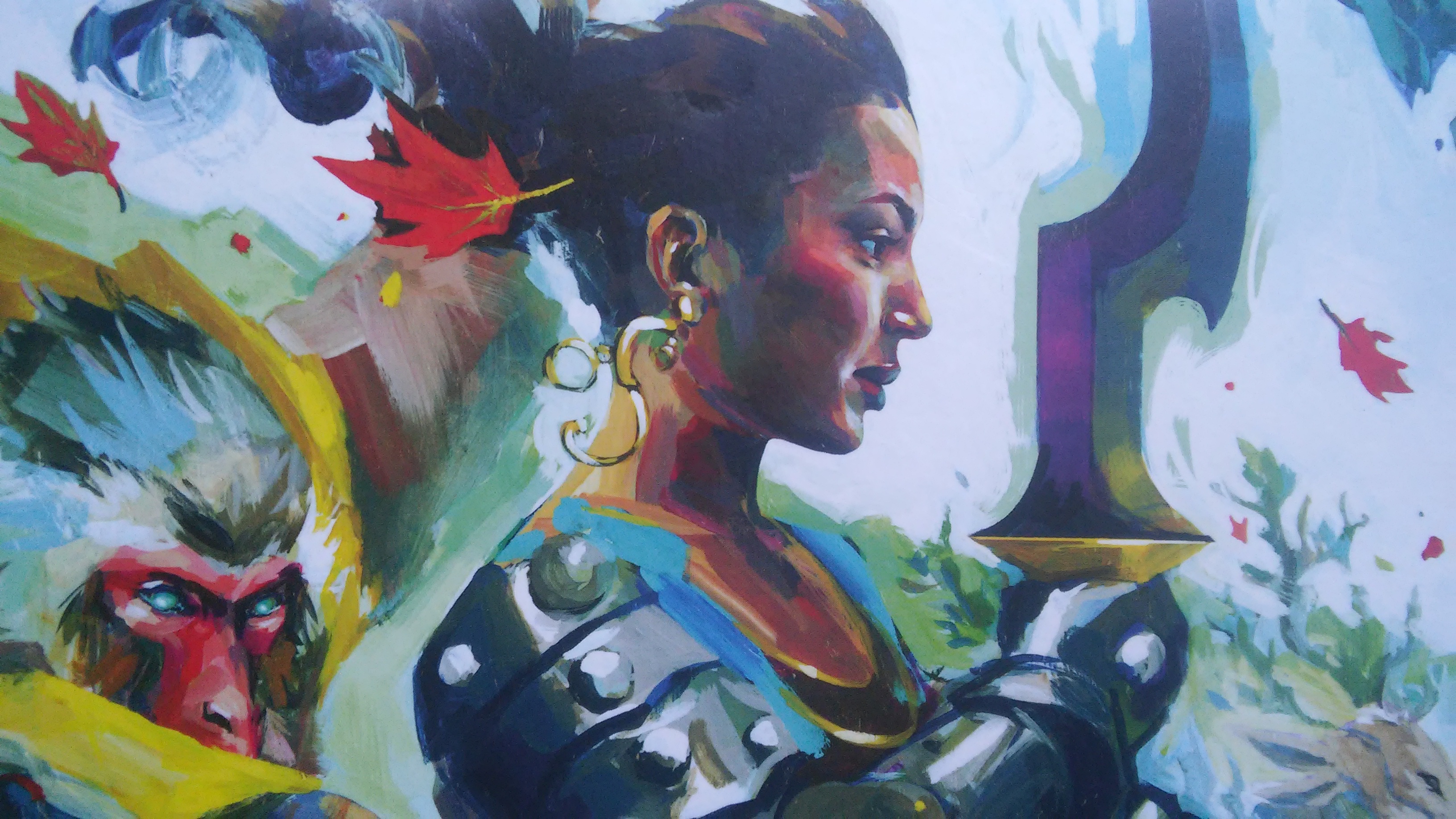 Sometimes the best of intentions and ideas fizzle as you get into the details of completion. Overlight is just such a product; described in broad strokes, it’s a bold new fantasy RPG with accessible rules and unique art design. The central imagination carries through, and makes me want to experience more of this setting, but as you dig into the finer points of this game, you find a lot of the delivery lacking.

Overlight takes place in a fractured world, where endless ocean sits beneath infinite sky, with seven continents floating between them all, defying all rules of nature. No suns orbit, so night comes only when one continent floats above another, placing the top one in a timeless light and the bottom in near constant darkness. Flight is the only method of getting from one to the other, and each is home to a different race, ecology, and society. It’s easy to become jaded or bored with fantasy, which too often relies on a few recycled tropes to fuel its stories. Overlight is a breath of fresh air, melding different cultures and philosophies with prog-rock aesthetics and a fine layer of mystery. The authors pose this as the progenitor (or maybe member) of the Kaleidoscopic fantasy genre, something that seems a little confusing as described in the book.

You play as the Skyborn, supernaturally gifted individuals who can manipulate the Overlight into special powers, but running a risk that you could overload yourself with its abilities. Your journeys take you across a setting that feels like a more contained Numenera, stretching across genres and setting types in its seven continents. The races, who are in some cases exotic in biology and in some by philosophy, come with diverse struggles between one another, covering warfare, intrigue, exploration, and more. Everyone who reads through this will find something to be attracted to, whether it be the political maneuvering of the mask-bearing Aurumel to the hidden jungle warfare between reptilian Teryxians and squirrel-like Banyari. My personal favorite would be the journey of discovery on Nova: the top continent of white deserts inhabited by sentient centipedes. At the center of this mysterious, hell-blasted landscape lies a single enormous temple, pointing up into oblivion.

What Overlight does not have in great quantity, or really any at all, is any solution to these secrets, or any central conflict that relates to the setting. The first few pages mention something about a secret magical history, but one that doesn’t really come up later in the book (or appear to influence the setting at all, really). It’s for you, the players, to discover what you think is interesting and explore it. At times it does feel like more meat would help the game breathe, but there is certainly enough here to get your imagination running. At the same time, it can feel like a bit of a hodgepodge, with elements that have little to do with one another thrown in for the sake of individually feeling interesting. The broken world allows for things to be juxtaposed in ways that you may find intriguing, or you may ignore portions entirely. I appreciate this new vision of fantasy, but the pride it takes in its diversity sometimes comes across as lack of focus.

If there is a focus for Overlight, it’s the number 7 (owing to the seven shades of light in a rainbow). You have seven attributes, dice pools consist of seven dice, and we also have the races and continents. Seven doesn’t hold together as the greatest focal point of a game. It works fairly well for Overlight, but forces some strange choices.

The resolution mechanic, in and out of combat, is to roll 7 dice and check for values of 6 or higher. Your skills and six of your attributes range in die types from d6 to d12, but you always add your spirit die into the roll. The dice pools consist of 3x the dice of your relevant attribute plus 3x that of your relevant skill (or Wealth value, in the case of wealth rolls) and you will always include your d4 Spirit die. Why do you roll an attribute 3 times instead of 1? Because of the number 7. There are different outcomes based on the number of successes you roll, but unlike a game using, for instance, Powered by the Apocalypse rules, these degrees are fairly muddled. They don’t have any direct mechanical effects, which they don’t need, but the descriptions leave me confused about how we are meant to differentiate them.

The Spirit die has a few effects, both in and out of combat. It can grant you Spirit points, which you use to fuel your Chroma, or magical abilities, but it can also allow you to push rolls and increase the potency of your successes. In combat it works slightly differently, but the main importance of Spirit relates to those Chroma: when you use one of your powers, the value on the Spirit die is how many Spirit points the ability costs. If you go over your current limit, the power Shatters, mutating itself and you with it. You will gain some new restriction or mutation that will hamper your character, up until the point where the ability becomes useless but you are forever changed.

Making a character is fairly simple. You choose a race, which gives you a few bonuses and a special talent, refine that race with one of the many backgrounds, which function essentially as subraces but give you plenty of small hints of lore to fill out your personality, and distribute build points among skills, attributes, Chroma, and talents. These point costs seem strange, and I can…presume they make sense, I suppose, because the left over points are directly translated for Spirit points on a one for one basis. So a character who is less optimized will have many more chances to raise their successes or use their powers.

There are some weird rough edges to Overlight that you can never really shake, possibly even after playing it for a long time. For instance, some of the final Shatter effects are unbalanced. One will give the character rainbow colored webbed feet, while another of equal level will result in instant death. Not all of the rules are as conducive to gameplay as they might seem: if you play a human from the mountainous continent, the book says someone else MUST play one of the sentient monkeys who are spirit-bonded to you. That kind of instruction is exactly the way to rub a lot of gamers the wrong way. A chart explains four different types of dice pools, but three are identical. There are no rules for equipment or weaponry of any kind beyond ranged and melee working off of a different skill, but the book explicitly suggests enticing your players with weaponry. The resolution system is simple, but maybe not to the degree of usability that the authors intended. The antagonist section provides immensely usable enemy stats, as well as a mechanic to let them become more potent threats as the battle rages on. At the same time, with 7 continents to contend with, it leaves each one fairly sparse in terms of enemies.

The layout and art are similarly mostly good, but lacking in the polish necessary to make them truly great. The art pieces are crafted with a care and vibrance that sometimes overcome simple practicality. Each figure seems to breath with the struggle of their existence, showing off culture and drive. That said, sometimes you just need someone to stand still for a second and get a look at them. It can be hard to imagine what people or settings look like sometimes, with a book full of closeup action shots of the various races. Especially with the grandeur described in the book, it would have been nice to see a more diverse set of pictures.

The layout has larger than standard text, to the degree that you will notice it. This isn’t a problem per se, but it does mean certain sections take up more pagespace than necessary. What is a problem is how certain information is split among chapters, occasionally requiring you to rethink a character build because of a rule or ability you were unaware of when you started building your avatar. The game is simple enough that this is at best a minor annoyance, but one you will find consistently.

Overlight is the perfect example of a game that’s good, but falls shy of great. Its multitude of races and tone, availability of many campaign types, and simple resolution system draw you in. Staying would be a function of your group as much as the quality of the game. You would be out of line to call this game terrible, but it would be less unreasonable to pass it over for something with a meatier or clearer design.

Overlight has a lot to like, a few things to love, and enough strange decisions that many will pass over it. This kaleidoscopic vision of fantasy is full of adventure and possibility, if lacking in some of the substance that would truly make it shine. Maybe some future refinements will make it into something greater, but for now we are left with a game that can entertain, where it may not inspire. I hope to see more of this, and more from its creators, because there is something here that, with a little care and attention, could be very attractive.

John Farrell is a legal aid attorney specializing in domestic violence, living in West Chester Pennsylvania. You can listen to him travel the weird west as Carrie A. Nation in the Joker's Wild podcast at: https://jokerswildpodcast.weebly.com/
Related Articles: Overlight, Tabletop
Share
Tweet
Share
Submit