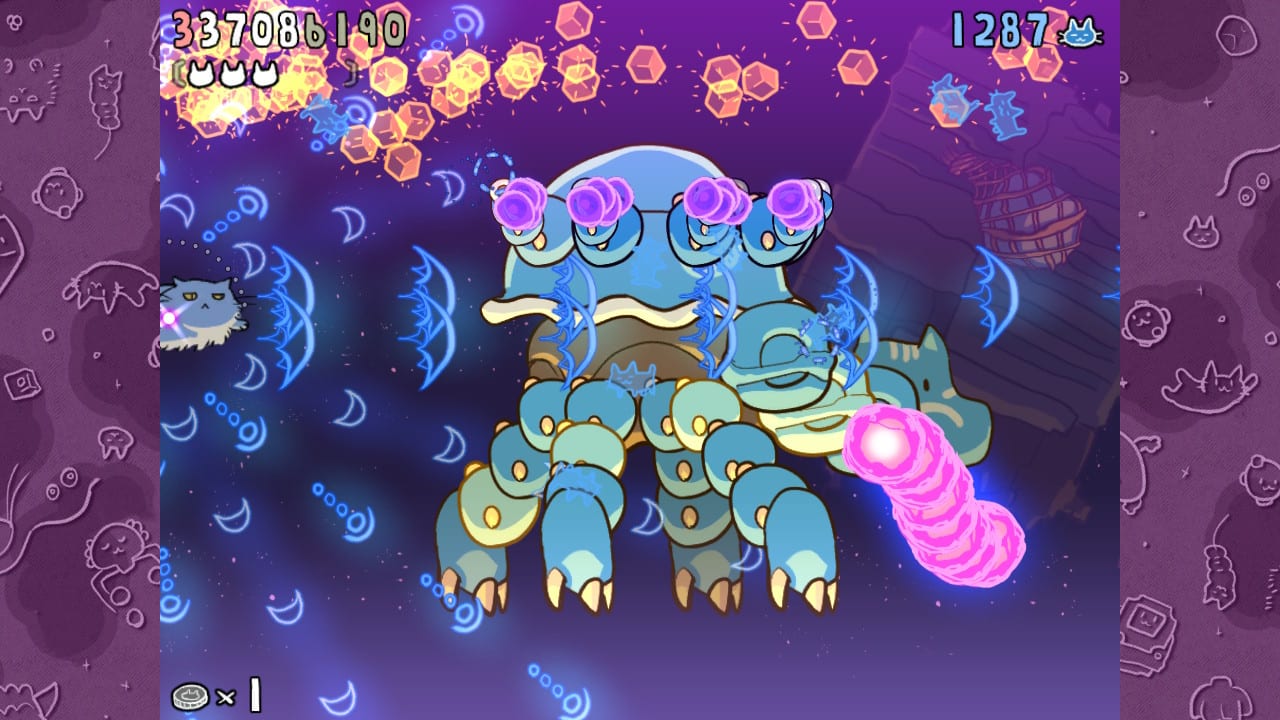 While I don’t personally own a cat, I enjoy the endless amounts of cat-related content on the internet. I’m also a casual shoot-em-up fan and can barely pass bullet hell shooters, but I still love dodging and the thrill of grazing past endless streams of projectiles for points. It’s with this mindset that I absolutely adored Neko Navy: Daydream Edition and its purrfectly hilarious premise, with tons of replay value and an adorably cute artstyle. 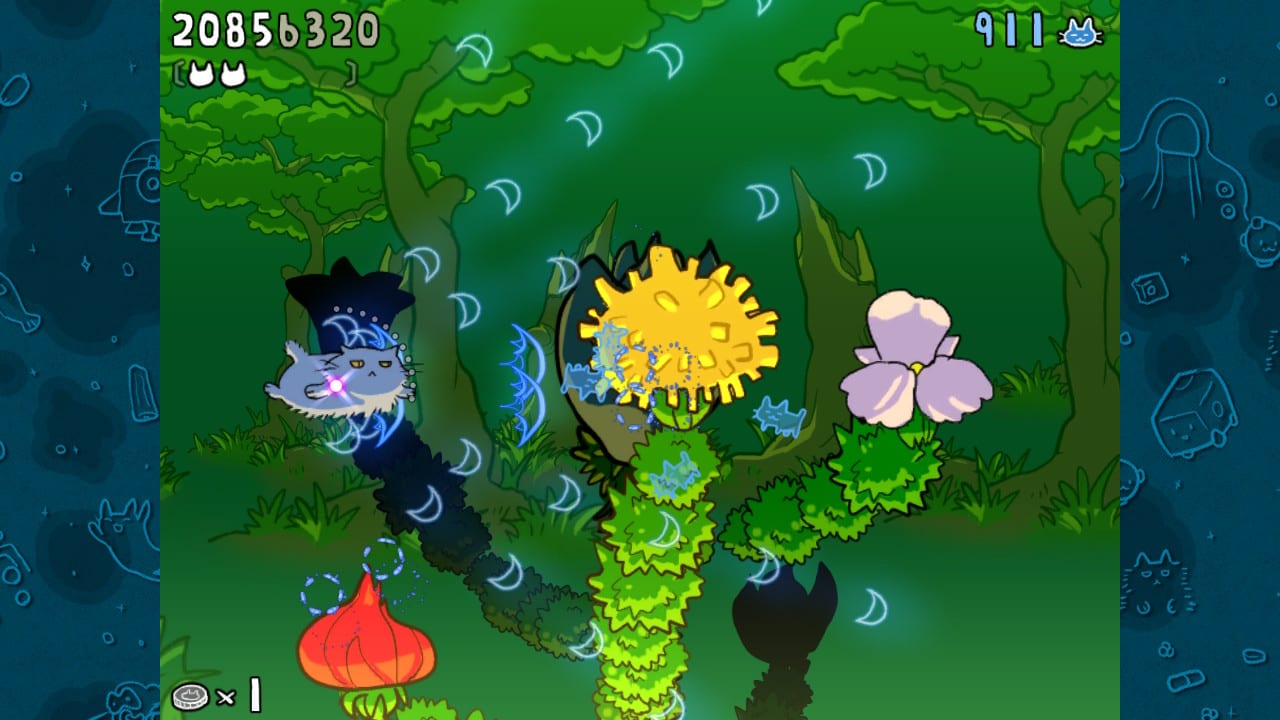 In Neko Navy, you get to control a cat (which may or may not hold true if you unlock some other characters) as you traverse through seven stages of pure bullet bliss. Like most bullet hell games, your character has a clearly defined hitbox in the middle, and you’ll lose a life should something hit you. This, of course, is easier said than done considering even the easiest of the three difficulties will spew tons of brightly colored orbs and lasers your way. However, you have a basic shot that can be powered up as well as a bomb that will be replenished every time you collect blue cat symbols scattered by destroying enemies.

This bomb mechanic sets Neko Navy apart from the competition because it actively encourages you to expend your bomb attack whenever you obtain it. You can only store up one bomb at a time, so not using it constantly will make for wasted opportunities in the future. This flies in the face of “save up your powerful item for the boss!” logic, which is refreshing because I can use my special attacks more often. They’re not overpowered as to make everything a cakewalk, but they do provide a breather if you’re getting overwhelmed by enemies on the stage. 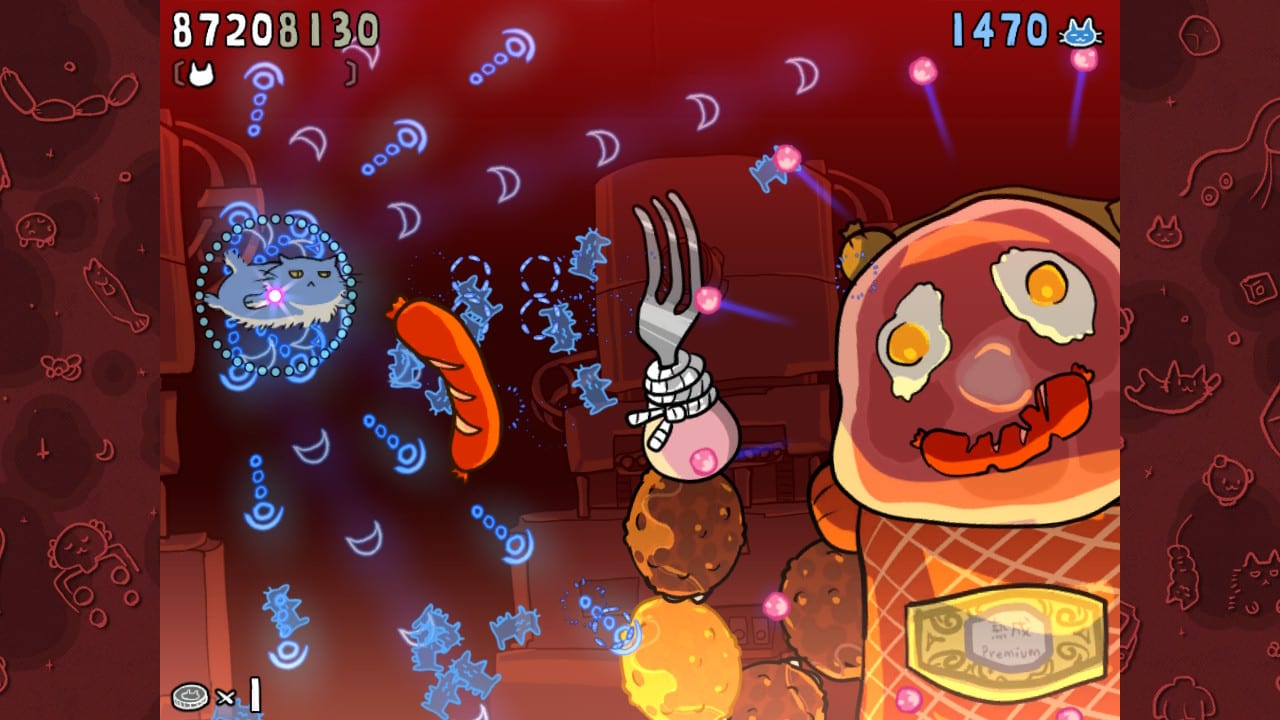 Speaking of enemies, the game oozes character and charm due to its unorthodox graphical style. Put simply, it feels like something out of a Saturday morning cartoon; I got to face a creature made entirely of breakfast meats called… Meatman and I was smiling throughout the whole encounter. Well, smiling until I had to figure out how to dodge sausages flung my way as well as the usual bullet streams. I’m not sure the last time I cracked a laugh at a bullet hell shoot-em-up, but I sure as heck did here.

It helps that the main gameplay loop is entertaining enough that restarting and going for higher scores was a treat rather than a chore. There’s a lot to love within the seven stages, from the cutesy background music to the enemies that look adorable (and want nothing but to see you dead at the same time), and even if you think some of these stages look like an acid trip, it’s a structurally great shoot-em-up. 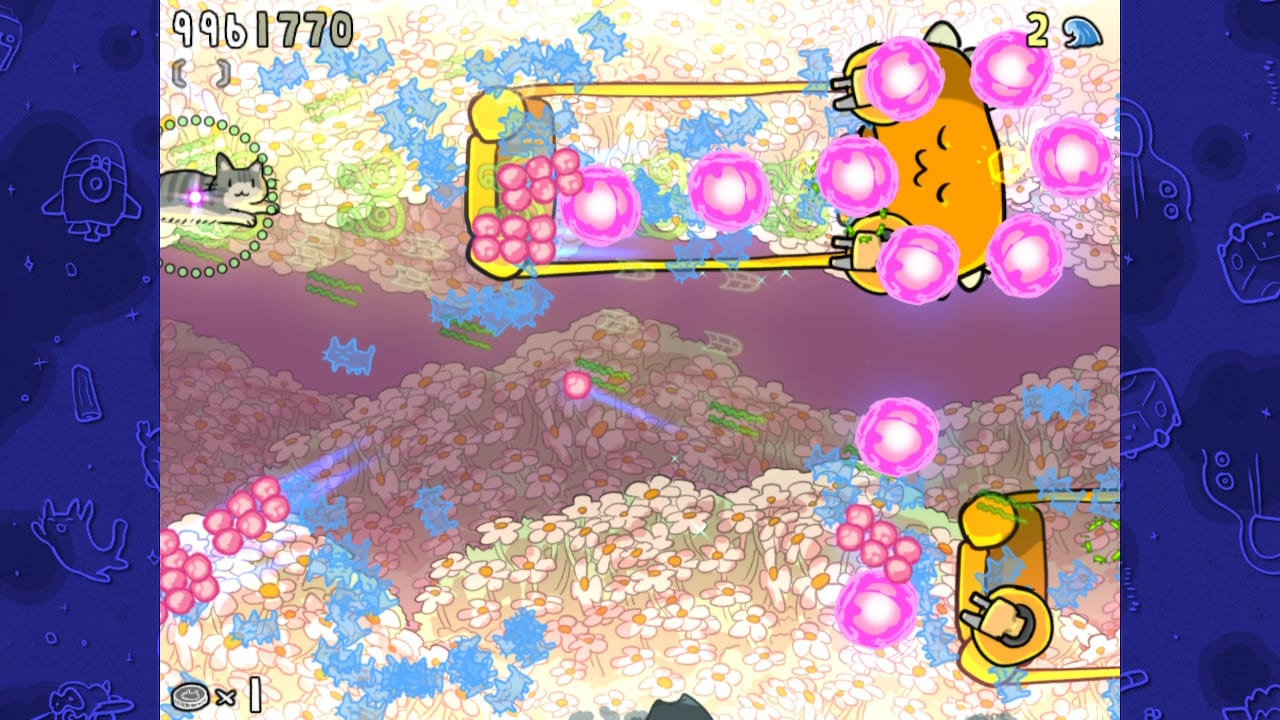 Neko Navy: Daydream Edition also comes with an Infinity mode, which is an endless stage with constantly shifting backgrounds and excruciatingly difficult enemy placements. This is the mode where you’ll test your bullet hell skills, and it’s all set to an infectiously cute J-pop song. While it’s meant for expert players, you can still try it out from the onset and get viciously murdered by wave 5. It’s still fun and I’m hoping to come back to it when I get better.

The replay value here is top notch, as you can unlock achievements and new characters from beating the game. For newbies and casual players, you can also increase the amount of continues you get at the start by playing enough times, which means you can tackle the Hard and Death difficulties at your own pace. On the harder difficulties, you can even unlock URA tickets, which will grant you alternate routes and stages; one such example is the boss in stage 3, which you can only fight if you’re on the alternate route (on a normal playthrough, the boss isn’t present, which fits the narrative of a stage set in a hospital and made me chuckle). Completing the game may take under an hour, but there’s a variety of unlockables that keep each run fresh and exciting. 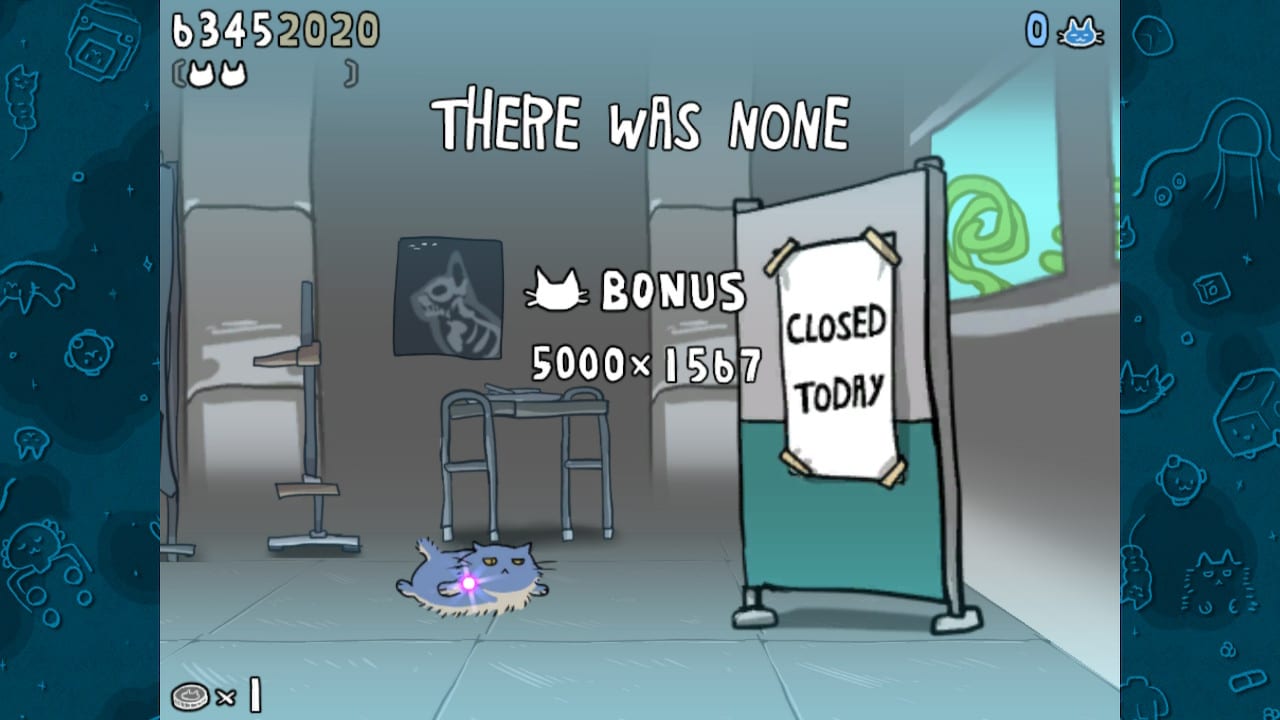 The only aspects I found lacking in Neko Navy were the training mode (which doesn’t offer unlimited continues, but is just a “pick your own stage” deal) and the fact that leaderboards were local only. Bullet hell games thrive on the insane score expectations of its fans, and I was hoping to see some ungodly numbers here. That said, these are just minor blemishes to an otherwise excellent game.

There hasn’t been a shoot-em-up game in recent memory that’s made me smile quite as much as Neko Navy: Daydream Edition. Its adorable artstyle mixed with innovative gameplay mechanics and a ton of replay value will reward anyone who’s feline up to the challenge, meow!

Elisha Deogracias is an aspiring accountant by day, freelance writer by night. Before writing for Gaming Trend, he had a small gig on the now defunct Examiner. When not being a third wheel with his best friends on dates or yearning for some closure on Pushing Daisies, he's busy catching up on shonen manga and wacky rhythm games. Mains R.O.B. in Smash. Still doesn't know if he's a kid or a squid.
Related Articles: Indies, Neko Navy: Daydream Edition
Share
Tweet
Share
Submit