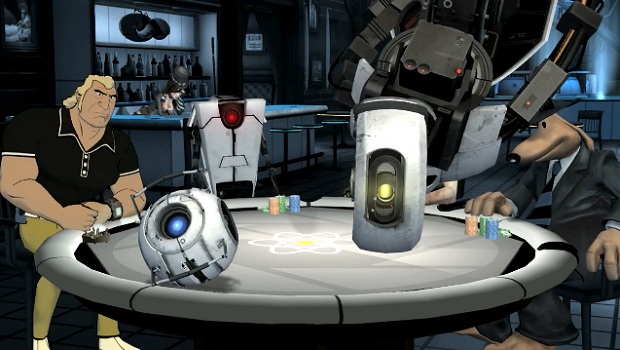 Conventional wisdom says that single player card games are only enjoyable for those who really like playing cards in real life. It makes sense, right? The best part of poker and other card games for all but the most hardcore of players is the chatter and camaraderie around the table. You don’t get that in a single player game, so unless you’re working on your strategy there’s not much of an experience to be had. To say that Poker Night 2 challenges this perception would be an understatement. Poker Night 2 takes the idea of single player video card games having limited appeal, shoots it through a portal, and leaves you wondering if the idea is still alive.

The game has you facing a star-studded cast in a series of 5-person tournaments. Your opponents are Brock Samson from Venture Bros., Claptrap from Borderlands 2, Ash of The Evil Dead fame, and Sam and Max of their eponymous franchise. Your dealer is the ever snarky and sarcastic GLaDOS, and a few other characters from the aforementioned franchises make cameo appearances from time to time.

[singlepic id=12017 w=320 h=240 float=left]There isn’t all that much to the gameplay mechanics of Poker Night 2. You play repeated tournaments of Omaha or Texas Hold ‘Em, with each rewarding you with tokens that can be spent on new card decks, poker chips, and table felts inspired by the franchises represented in the game. Occasionally a special “bounty item”, like Ash’s Necronomicon or GLaDOS’ personality core, will be up for grabs and playing the game can also net you some nice exclusive items to use in Team Fortress 2 and Borderlands 2. But all of this is just an excuse for the real fun in this game: the dialogue.

This is the only poker game I’m aware of that will actually make you feel like you’re sitting around a table with a bunch of interesting characters. The banter that takes place between your fellow poker players is natural and entertaining; quite often I found myself actually laughing out loud at the conversations that arose during gameplay. It’s really impressive how Telltale has managed to bring characters from several different franchises together while maintaining their individual charm and personality. What’s even more impressive is that, although each character has a few catchphrases they cycle through for folding, going all in, and so on, I’ve yet to hear the same overall line of conversation repeated twice even after over a hundred hands of poker.

[singlepic id=12028 w=320 h=240 float=right]This creative dialogue is definitely where the game shines, as the poker AI itself leaves something to be desired. Some players are stupidly aggressive betters, and their bluffs can be hard to call (although buying them drinks with your extra tokens will make their tells a bit more obvious). I never played the first Poker Night at the Inventory so I’m not sure how well the original balanced comedic chatter with serious poker play, but I feel like the sequel definitely prioritizes the former. While I haven’t reached the point where dialogue starts to repeat, I’m certain it does at some point; funny though it may be, I imagine it will begin to grate after a while.

With that said, if you’re a fan of one or more of the franchises featured in the game and mildly familiar with the game of poker, Poker Night 2 will provide more than enough entertainment to justify its $5 price point. The characters’ appearances and voices are true to their backgrounds (with the exception of Ash who doesn’t look or sound like Bruce Campbell). Telltale has taken decent poker gameplay, some gaming culture icons, and an entertaining script and wrapped it up neatly into an affordable little package. For less than a cup of Starbucks, it’s hard to go wrong.