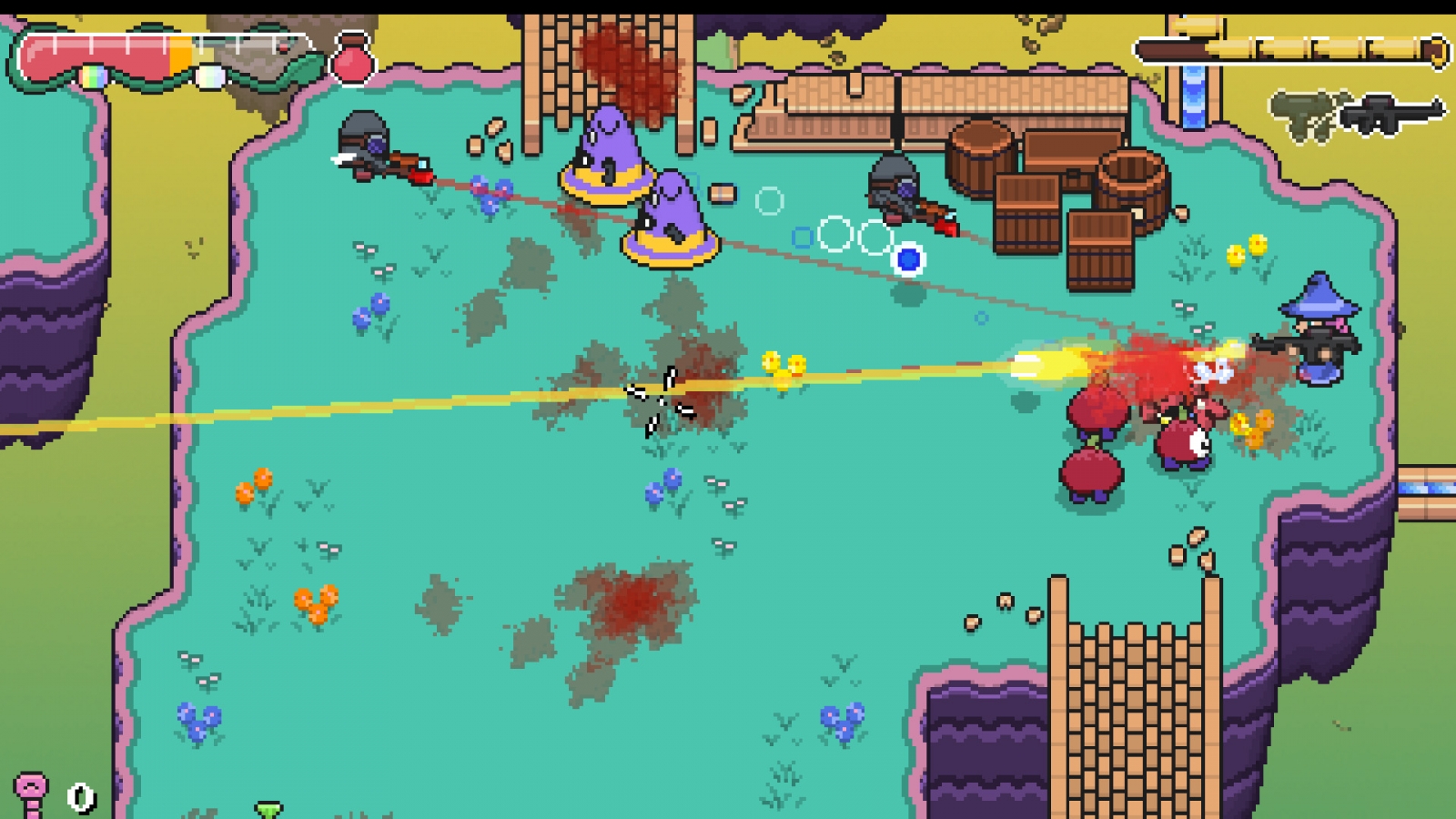 Twin stick shooters are a bit of a lost art these days, with classics like Smash T.V. and Robotron: 2084 left to die in the trenches of the past, despite retro enthusiasts still praising their gameplay. Thankfully, due to the resurgence of indie titles these past few years, twin stick shooters are slowly making a comeback. Enter Trigger Witch, a delightfully cheery, bloody, retro inspired shooter, lovingly inspired by the best parts of past twin stick shooters while featuring just a hint of NES/SNES RPG worldbuilding. 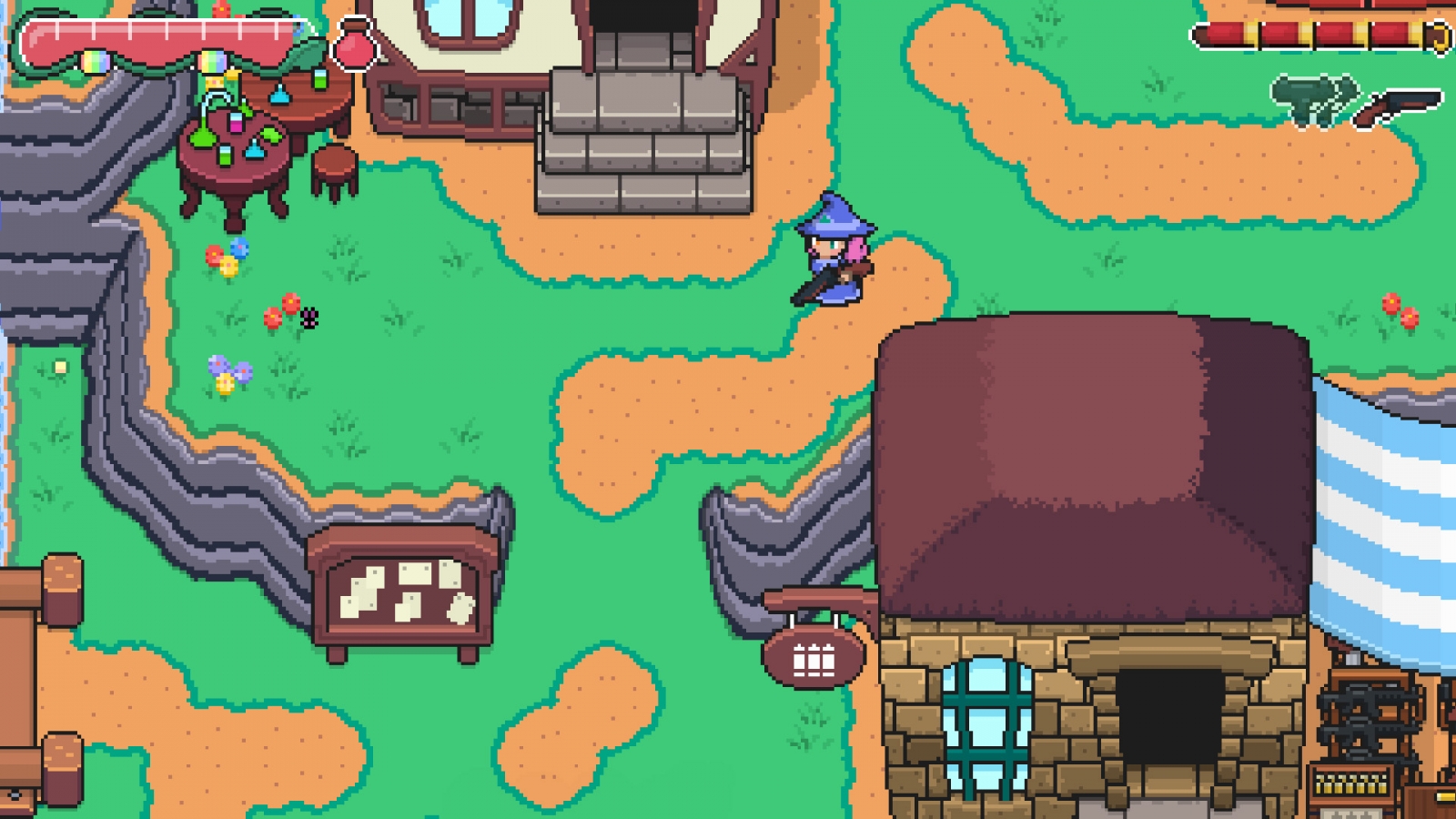 Colette has slept in again, despite today being the Stock Gauntlet – the ultimate test for all witches hoping to join The Clip, the armed-to-the-teeth protectors of Evertonia. Her mother Hilda, the Grand Receiver and one of the leaders of the Witches of Ozryn, wakes Colette and forces her to get moving. Colette gathers her friends Remi and Shelly, both of whom are also participating in the gauntlet, and sets off for the Ordnance Rift to see if they have been deemed worthy to participate in the challenge. If so, the rift will bestow upon each witch a weapon, allowing them to proceed to the Gauntlet. Those who complete the Gauntlet are then granted the honor of becoming a member of The Clip.

Created long ago during The Great Trigger, the Ordnance Rift brought firearms to the witches, forever changing their way of life, and creating a new religion called Ballisticism. After the opening of the rift, the Witches slowly lost their knowledge of magic, instead replacing their once formidable magical prowess with a mastery of firearms instead. Along with the weapons came division amongst the witches and the goblins, who were upset that they were not able to wield the firearms with the same destructive force as the Witches. After a long and arduous fight between the two colonies, the witches used their remaining knowledge of magic to create the Norsou Partition, an impenetrable barrier between the goblins’ home and the witches’ home, and proceeded to live for many generations without either side crossing the partition. That is until a mysterious cloaked man appears on the night of the gauntlet and passes through the threshold, setting off a series of events that pushes Colette to save Evertonia and embrace both the good and bad of her culture’s past. 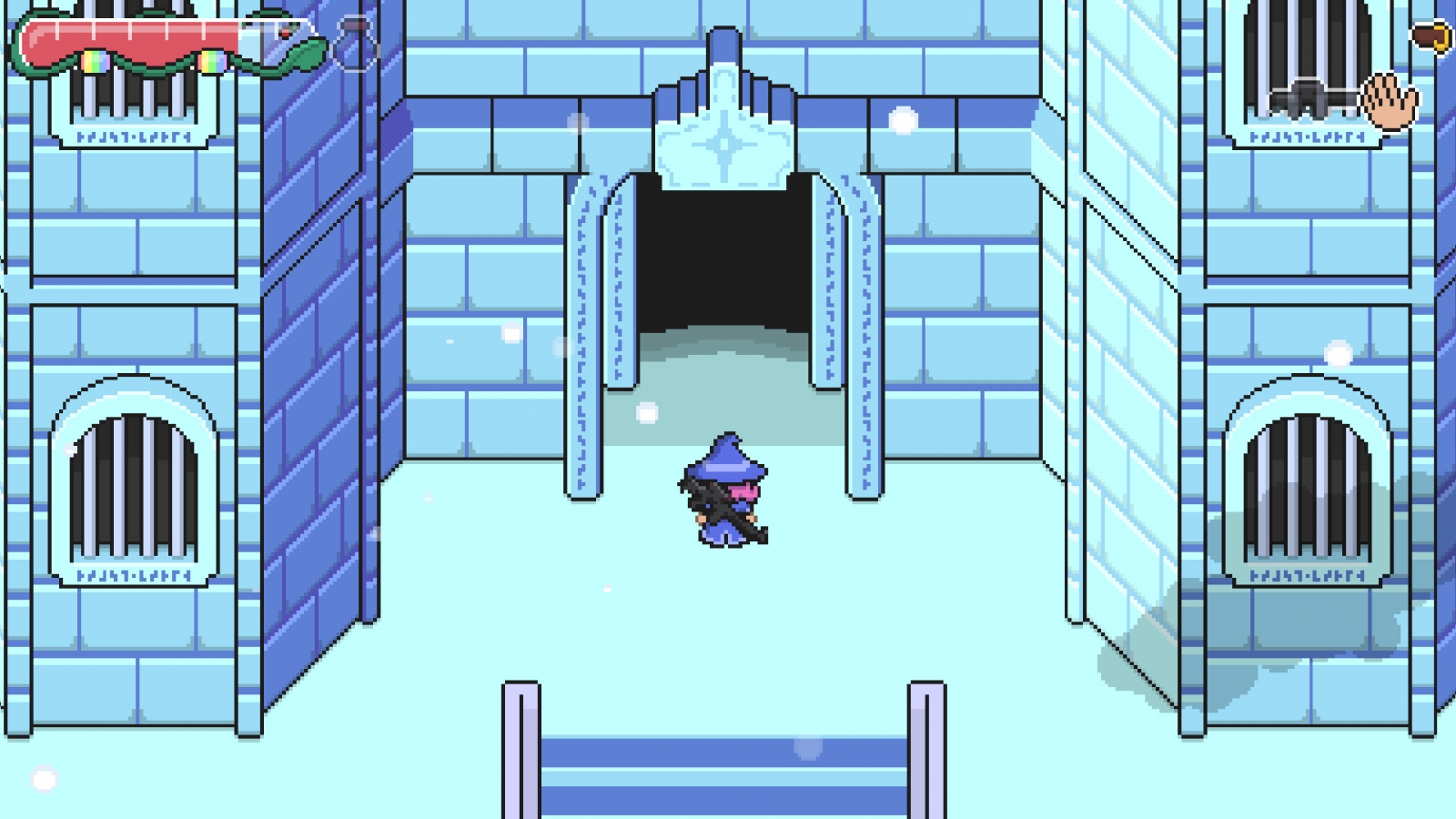 Trigger Witch is both an homage to retro RPGs with its overworld and map being reminiscent of classic NES and SNES games of the 80’s, while also being entirely unique. Evertonia serves as a charming backdrop to explore, scattered with a variety of terrains to traverse, people to meet, places to waste your hard-earned gems, secrets to discover, and weapons to unlock. There is no shortage of places to blow off steam when you want to take a break from the relentless hordes of enemies that you will face in one of Trigger Witch’s increasingly difficult dungeons.

Thankfully, Colette is well prepared for her foray into the dangerous world of Evertonia, armed at first with a simple hand cannon, but quickly finding deadlier artillery including a rifle, dual Uzis, a mortar launcher, an AK-47, shotgun, sniper rifle, flame thrower, and more. These weapons can be switched at will, either by using the radial dial which appears when you hold down a button, or by assigning up to four weapons to specific slots on the D-PAD. Weapons do have a limited supply of ammunition, forcing players to switch between guns quickly while dodging increasingly larger waves of enemies, though all gun ammo does replenish itself after a few seconds of not being used. 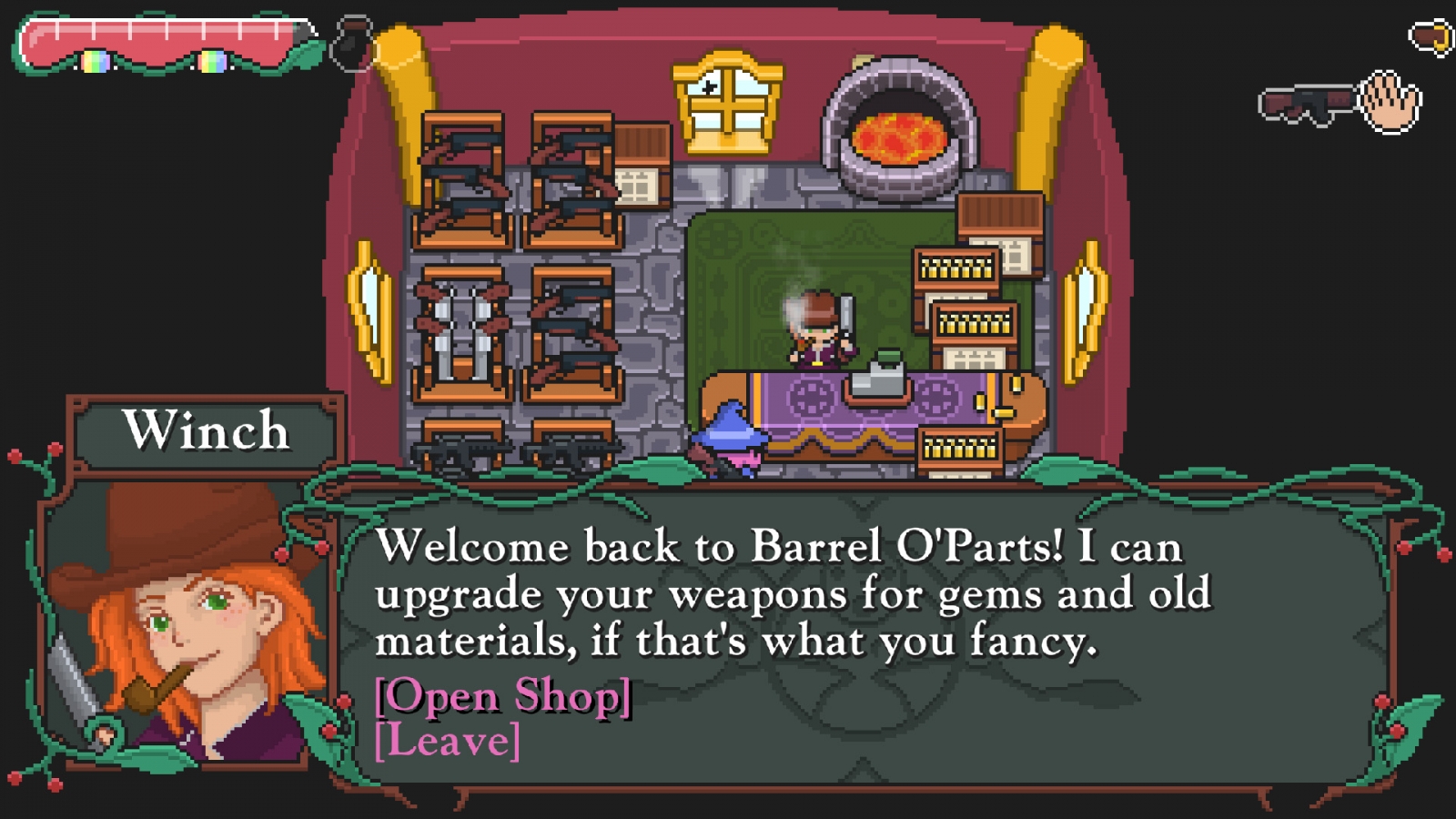 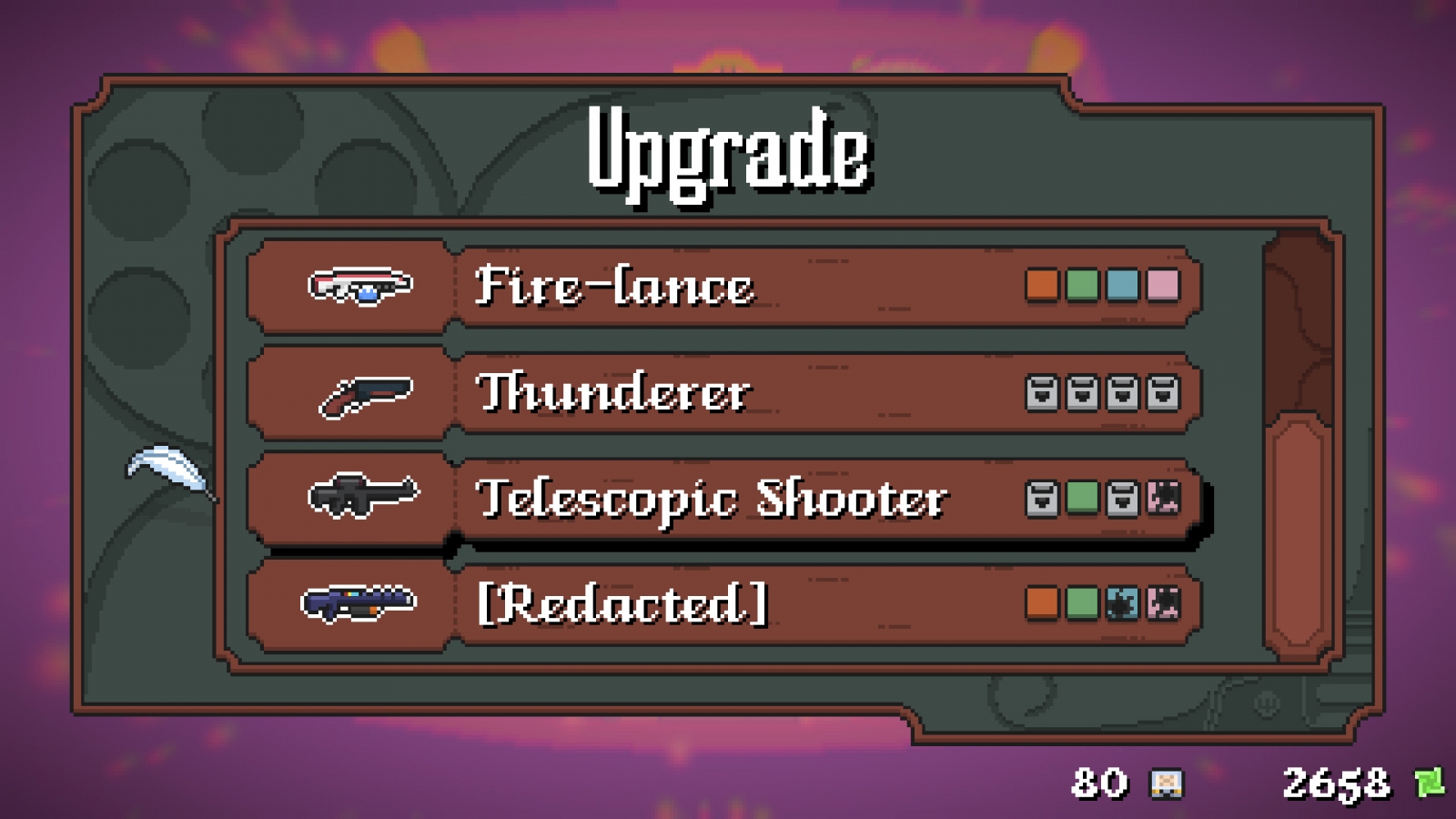 The time that it takes ammo to replenish can be shortened via arms dealers in one of the towns scattered across Evertonia. Along with faster ammo reloads, Colette can use tomes hidden throughout the world to unlock various upgrades for each weapon, including increased damage, rate of fire, and ammo capacity. After unlocking an upgrade with a tome, you can then use gems, Trigger Witch’s currency, to further upgrade that aspect of that gun.

Gems can be found everywhere in Trigger Witch, and I do mean everywhere. Enemies drop them, crates are full of them, barrels and other destructible objects drop them, and you can even fight in an arena or participate in a little gambling for more. You’ll gain plenty of gems to upgrade your most used items during a regular playthrough, but for completionists who want to upgrade all items in a single playthrough, you will need to either compete in the arena multiple times or explore the world far more than is necessary to finish the campaign. 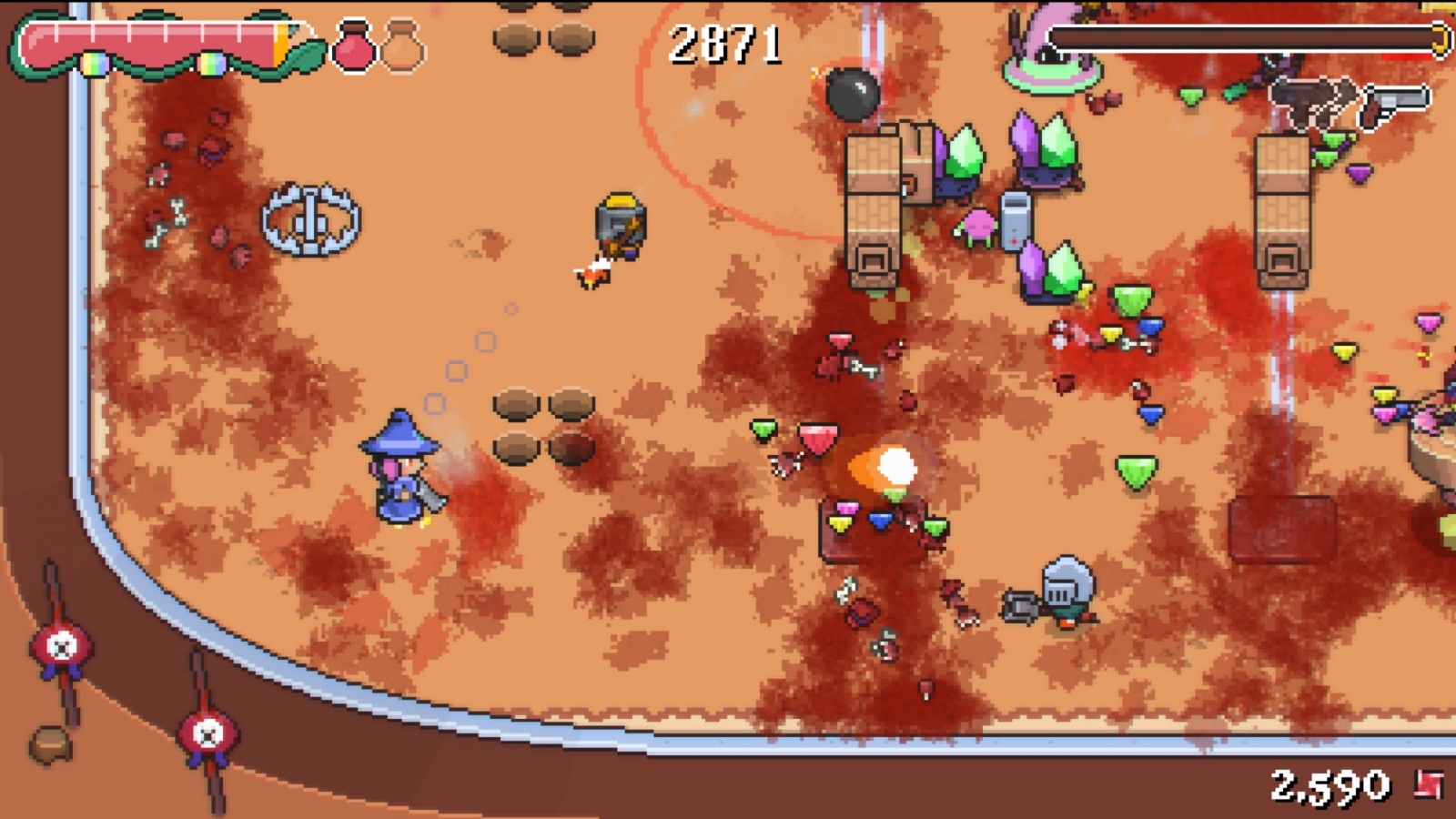 Trigger Witch wastes no time throwing players into combat, slowly dialing up the difficulty until you’ll reach sections where you’ll be surprised that you’re able to keep track of your character amidst all the blood and carnage. While Trigger Witch is mostly comprised of cute, retro inspired graphics, the game is surprisingly bloody during combat with body parts, bones, and blood spraying everywhere.

Most of the game consists of elaborate fetch missions, where you are given the location of various items needed to progress and must reach that location, normally to be told to go elsewhere, or to investigate the game’s version of dungeons. Dungeons in Trigger Witch are more modern than you would expect, showing up as gun factories, gem mines, a goblin prince’s haunted castle, a world built in the sky, and more. While they are all unique and feature new enemies, there is an unfortunate shortage of them to explore. There are six main dungeons to complete during the main story, with no extras to find despite the decently sized map available to explore. 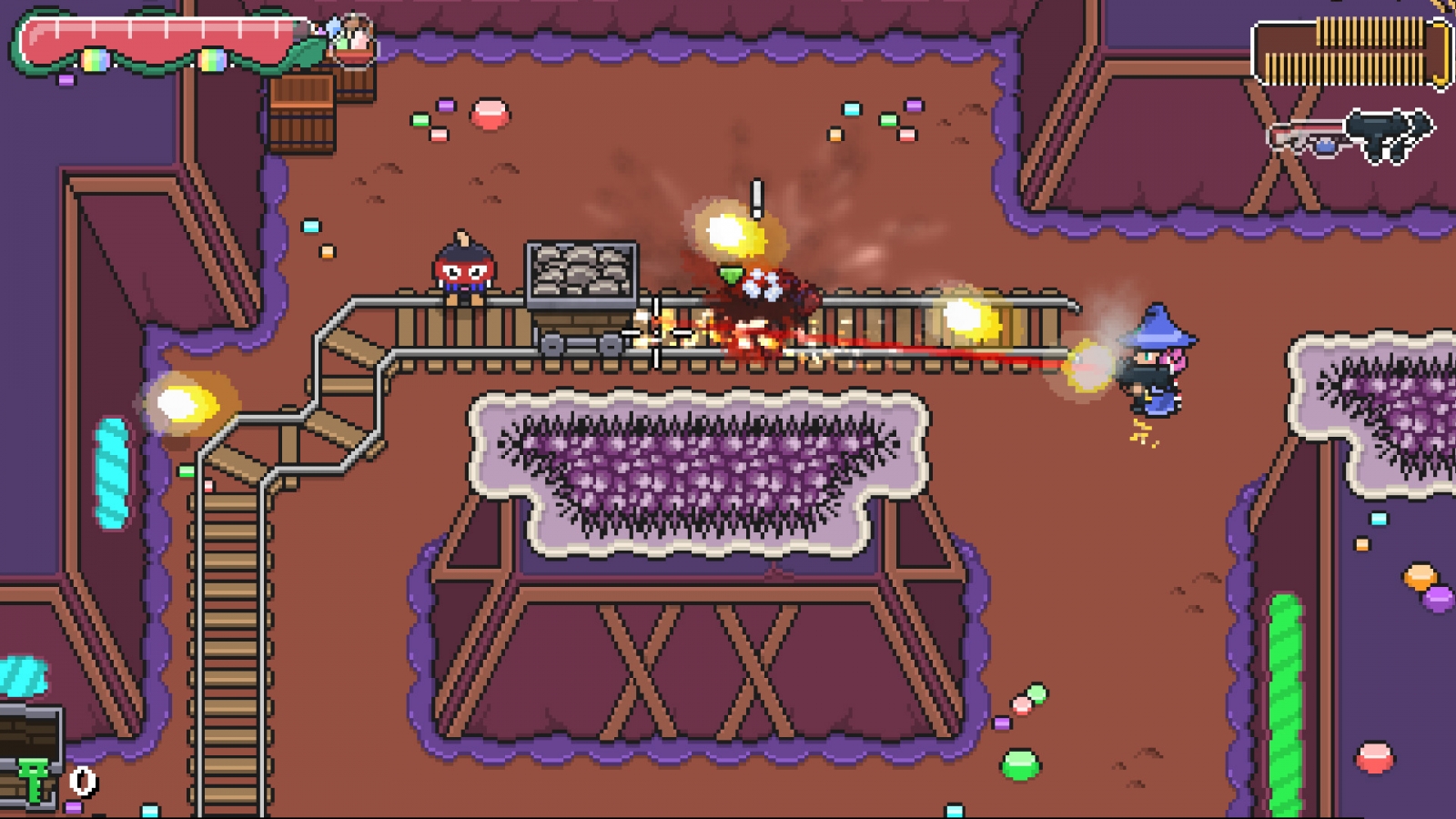 Each dungeon tends to bring a new, unique aspect into play that is necessary to master to progress. One dungeon involves using crystals to reflect your bullets and reach otherwise unreachable areas or cross distances quickly that you cannot by foot, while another involves the use of doors run by different colored batteries, which are in short supply. Each dungeon also provides Colette with a new weapon, sometimes needed to progress – such as the flamethrower or mortar launcher – and sometimes just to help you better handle the hordes of enemies being thrown at you.

Warp spots are provided throughout each dungeon, allowing Colette to quickly traverse the dungeon’s multiple floors. Each dungeon ends with a chaotic boss battle, although some are far more interesting than others, with only a few being a challenge once you have properly upgraded a few weapons. Mechanical dragons, ghosts, and a wild end boss make for a fun, if flawed, set of bosses. They were never unfair or too difficult, most just were too easy to take down with your regular artillery and only became a hassle when summoning other enemies to distract you or darkening a room so that you have to rush to relight the fire pyres to better see the boss. 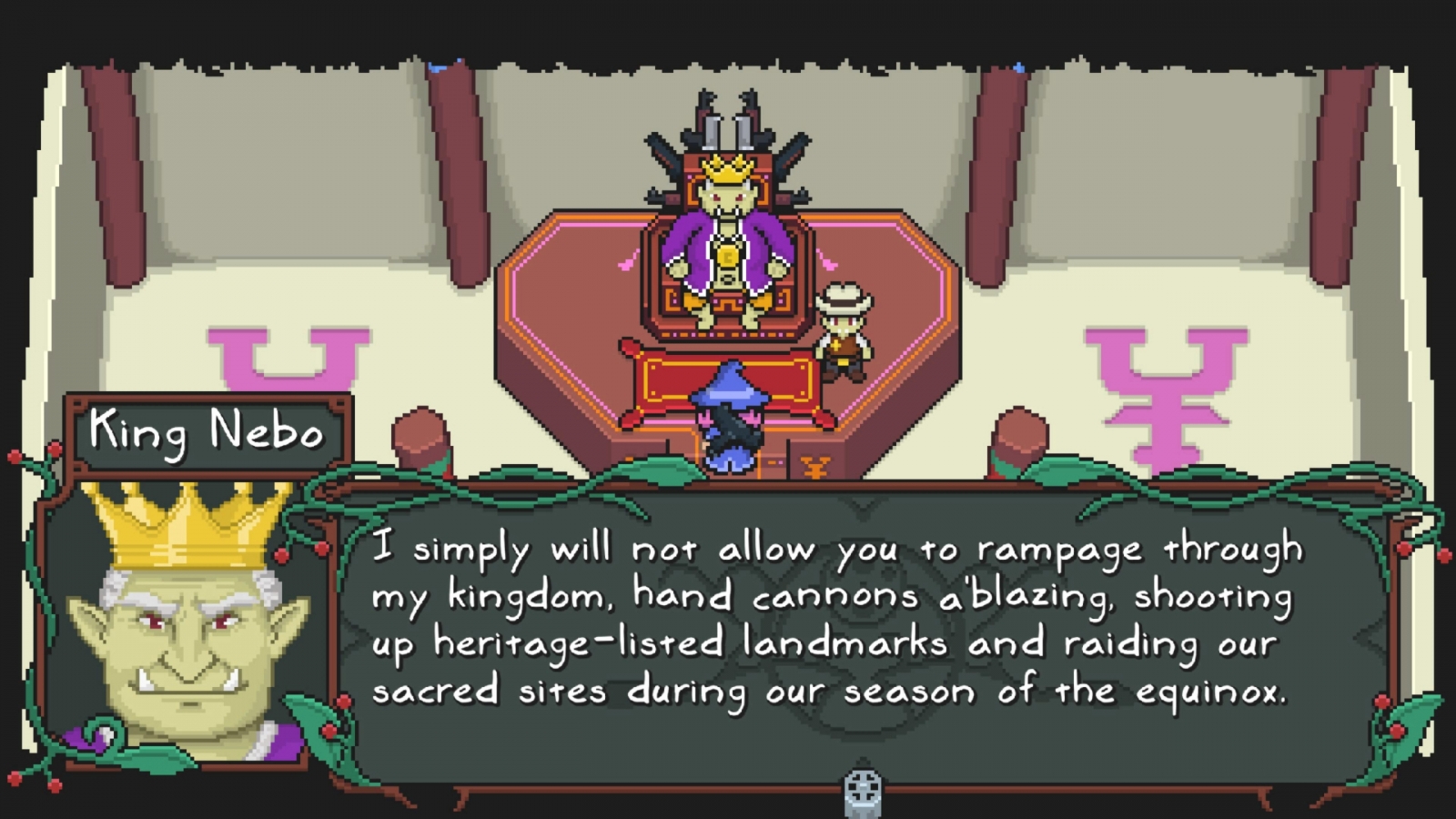 While the game is a challenge, there is no real stress due to there being no penalty for death aside from respawning at the nearest check point, usually the last warp zone used or passed. Enemies do respawn, but that is rarely an annoyance unless you have to cross a large group of them to retry a boss, but I normally took it as a chance to gather more gems for upgrades.

Speaking of upgrades, you can also increase Colette’s health using gems at a potion shop in town. A few map additions which show the location of all collectibles in each area of the world map are also purchasable, but that is the extent of the items you can purchase. Do not feel that you need to horde your gems, they exist solely to upgrade your weapons and health.

What really made Trigger Witch stand out to me was the witty dialogue and banter between characters. Shelly, Remi, Colette, Hilda, and even some of the NPCs you’ll encounter are all well fleshed out for this type of game, allowing us to learn their back stories, their dreams, and their grievances. The world of Evertonia is also a fascinating place, with various items scattered throughout which allows you to learn its history, the strife between the goblins and witches, and even a sad love story between a goblin and a witch that were separated. While the game could have been merely a twin stick shooter with no story and still remain fun, it helps to have so much thought put into crafting a world and characters that players will be interested in, giving them reason to progress. 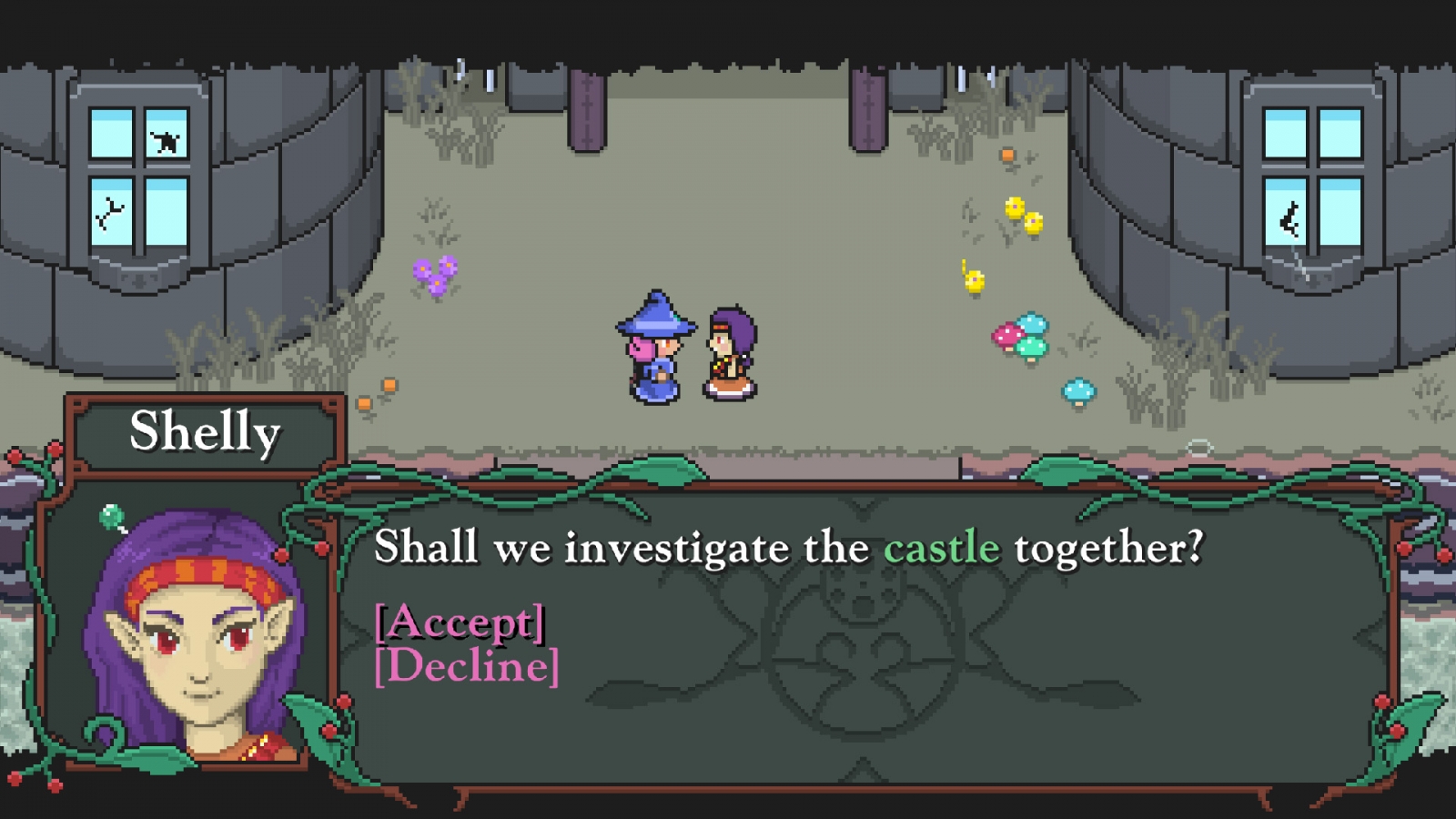 Also, without spoiling anything, I just want to say the ending boss is bonkers and came from so far out of leftfield that I barely knew how to comprehend what was happening. It was a hilarious and unexpected twist that further cemented my appreciation for this game.

At only 7 hours long, I wish that Trigger Witch had more to it. Just as I felt that the game was finding its footing, my weapons were feeling powerful, and the world was unlocking – it ended. Sure, the ending leaves a great world for a sequel to take place in, and there is a New Game+ mode as well as world changes which occur after the events of the ending, I still wanted a few more dungeons to explore, a few more NPCs to meet, and a few more bosses to conquer.

Trigger Witch is a surprisingly cute yet bloody homage to retro RPGS while also being an incredibly competent twin stick shooter. You can tackle the campaign solo or alongside a friend, adding much needed replayability. Despite the short length, I thoroughly enjoyed my time in Evertonia. The characters, dialogue, backstory, and challenge left me satisfied and looking forward to a sequel.

Richard Allen is a freelance writer and contributing editor for various publications. When not writing for Gaming Trend you can find him covering theatre for Broadway World, movies and TV for Fandomize, or working on original stories. An avid retro gamer, he is overly obsessed with Dragon's Lair. Chat with him via @thricetheartist on Twitter and @richardallenwrites on Facebook and Instagram.
Related Articles: Trigger Witch
Share
Tweet
Share
Submit