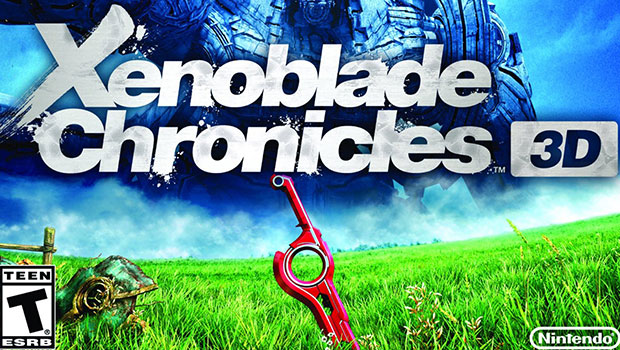 There are games that you play, and then there are games, like Xenoblade Chronicles, that you experience. This was a tough review to write, partly because it’s challenging to whittle down everything about this ridiculously massive RPG into a readable size, but mostly because it’s just so hard to tear away from playing Xenoblade Chronicles 3D long enough to write anything down.

Xenoblade Chronicles 3D is a ported re-release of the original highly renowned Wii title that launched in 2010. It is also the first, and currently only, exclusive game specifically designed for the New Nintendo 3DS XL. In fact, without the new 3DS XL’s upgraded processing power, Xenoblade Chronicles couldn’t possibly have been ported to the handheld system in any recognizable form.

When Xenoblade Chronicles was first released, the developers claimed they had pushed the aging Wii console to its absolute limit. Now, the same RPG that served as the Wii’s last hurrah five years ago is being used as a launching pad for Nintendo’s latest handheld system. Make no mistake, this game was first released in the age before Nintendo made their leap into HD, which means if you’re a gamer who simply can’t live without glossy high definition renderings, you may be initially disappointed. Some of the character models, particularly in the faces and the eyes, appear blocky and pixelated during cutscenes and closeups. The relatively low resolution of the 3DS screen also isn’t doing the graphics any favors. All things considered, Xenoblade Chronicles is not the most graphically impressive debut for the new 3DS, but you’ll hardly notice it once the story picks up speed after the first hour or so of play. After that, the biggest problem will probably be remembering to eat and sleep between saves.

The game follows a young hero named Shulk who, along with his colorful cast of friends and a mysteriously powerful sword, sets out to save his world, a place known as the Bionis, from an invading alien army. It is a very, very long game. Safe estimates list the core story mode at an average of 100 hours with around 8 hours of cutscene cinematics. But unlike some RPGs that stretch the length by revisiting old maps and forcing level grinds, the pacing in Xenoblade Chronicles 3D manages to make every moment feel significant to the weight of the story, and the character level progression flows seamlessly with the narrative.

Fair warning, Xenoblade Chronicles 3D is extremely engrossing and it can become a major time sink due to its depth of story and fast-paced gameplay. All the classic RPG hallmarks are present. There’s a multi-tiered leveling up system that focuses on using experience points for upgrading special moves called “Talent Arts,” and a complex social linking system that grants bonus perks depending on how well you get along with your selected teammates. There is also a huge amount of detail placed in the weapons and armor available for the characters. Besides the varied strengths and weaknesses, which can be further tweaked by inserting gems into special slotted weapons and armor, there is a wide variety to the appearance of the gear. A welcome feature that’s not seen in all RPGs is that all the weapons and armor equipped to a character are visually represented in the gameplay and cutscenes. Not only can this lead to some visually entertaining moments (some of the armor looks insane), but it also makes the character customization choices feel more like an actual part of the experience.

The battle system is also top notch. Fights are executed using a unique blend of turn-based attacks and real time movements that  somehow never get old. In a style similar to most MMORPG games, players are free to enter and leave battles at will as they initiate special attacks and struggle to maintain advantages in position around the enemy. Strategy and timed attacks place an emphasis on skill rather than just the level of your character, which effectively removes the need for long and tedious grinding sessions.

Xenoblade Chronicles 3D is absolutely enormous in scope. One of the most impressive feats of the game is the way it conveys the world’s awesome sense of size as you move through it. The draw distance is probably the farthest in any game I’ve ever seen, especially on a handheld. It’s an amazing feeling to be able to see mountains and trees miles off in the distance while knowing you can actually go there and explore them at any time. Exploring is actually an integral part of the game; there are story missions and side quests that reward the characters with experience points for uncovering hidden items or locating secret passageways.

Xenoblade Chronicles looks incredible using the 3D function. I understand there are some 3DS players who choose to only play with the 3D turned off, but those players will really be missing out on this game’s highly immersive experience. The 3D effect, particularly due to the new 3DS’ autostereoscopic tech that aligns the image according to the positioning of the eyes, is a spot-on match that pairs perfectly with the dimensional depth of the game’s environments. The distant mountains actually appear deep in the screen as the characters run towards them, and the enemy monsters, some of which tower over the characters like five-story buildings, feel more impressive and threatening as you run around and under them during battle.

It really is an amazing RPG that’s difficult to criticize. It’s long, but it’s never boring. The characters are fun, but never annoying. Even the voice actors are excellent in their performances. The only obvious complaint would be that not enough was done to improve upon or update this new release. Besides the 3D effect and the overall portability, there really isn’t any implementation of the 3DS’ unique features. Both screens are in use – gameplay on the top screen and character party information on the bottom screen – but it feels like an opportunity was missed by not including any form of touch screen controls. And while there is limited Amiibo support, if you’re able to actually find a reasonably priced Shulk figure (I had to wait in line at the Nintendo World store to pick mine up), it feels as if the feature is more of a tacked-on afterthought. Tapping the Shulk Amiibo to the screen in the main menu will earn you daily points that can be used to unlock viewable 3D models and music from the soundtrack. It’s better than nothing, but using the Amiibo really has no impact on the game itself. Of course, since the game is so much fun as it is, it’s hard to imagine how much better, if at all, touch controls or further Amiibo support could have made this amazing RPG.

Xenoblade Chronicles 3D is a solid showcasing of the New Nintendo 3DS XL for which this game, thus far, is the only exclusive. It is the absolute best way to play this classic RPG that not everybody may have had access to during its original run on the Wii. It is an RPG experience that absolutely must not be missed, especially for anyone already owning a New Nintendo 3DS XL. This game is excellent; I’m sorry to be blunt, but it really is. Now, if you’ll excuse me, I still have some areas and quests on the Bionis that are rabidly demanding my immediate attention.

Xenoblade Chronicles 3D is an excellent taste of things to come for the New Nintendo 3DS XL. The 3D presentation opens up the world of Shulk and his friends into a impressively immersive experience. While some of the graphics can appear dated, and it is missing features like touch screen or in game Amiibo support, there's very little about this seamless port that disappoints. It is highly recommended for any owner of a New 3DS XL in search of an engaging and superbly polished RPG experience.

Stefan started gaming the day his dad brought home a shiny, brand new commodore 64. He's been hooked ever since. Whether he's leveling up his ninja in Final Fantasy Tactics, cruising the streets of San Andreas or working on his Terran build order, videogames are never far from his mind. He is currently on the lookout for an appropriate 12 step program to address his electronic addiction.
Related Articles: Xenoblade Chronicles 3D
Share
Tweet
Share
Submit