Alien invasions are the premise of many conspiracy theories, movies, shows, and video games. These aliens have transitioned from grey or green creatures with big heads to a plethora of other forms. Following that pattern, why not take things that are usually small like ants, spiders, and other bugs and enlarge them to gargantuan sizes? Earth Defense Force: Iron Rain answers this question and places these massive insects alongside several other types of threats. The quirky concept mixed with powerful gunplay creates an enjoyable experience.

Earth Defense Force: Iron Rain focuses on alien invaders known as Aggressors attacking Earth. You are part of the eponymous Earth Defense Force, whose primary goal is to protect mankind and wipe out all Aggressors. You’ll use a multitude of guns, plenty of gadgets, and special PA gear in order to get the job done.

The story itself follows you and the team as you take on missions given to you by your superiors. During these missions, the EDF starts noticing increasing Aggressor activity, the reappearance of a large ship called the Hivecraft, and even the appearance of new unknown species. You’re tasked with fighting these forces the best you can as the EDF researches more efficient ways to deal with them. Things start off with enemies such as giant ants, wolf spiders, and mechs, but you’ll soon run into glowing scorpions, missiles that turn into aliens, and even a kaiju type creature. The storytelling is okay, but doesn’t really compel me to pay attention to it, The odd and unimpressive voice acting doesn’t help either, although it feels like the game is trying to have fun with itself. 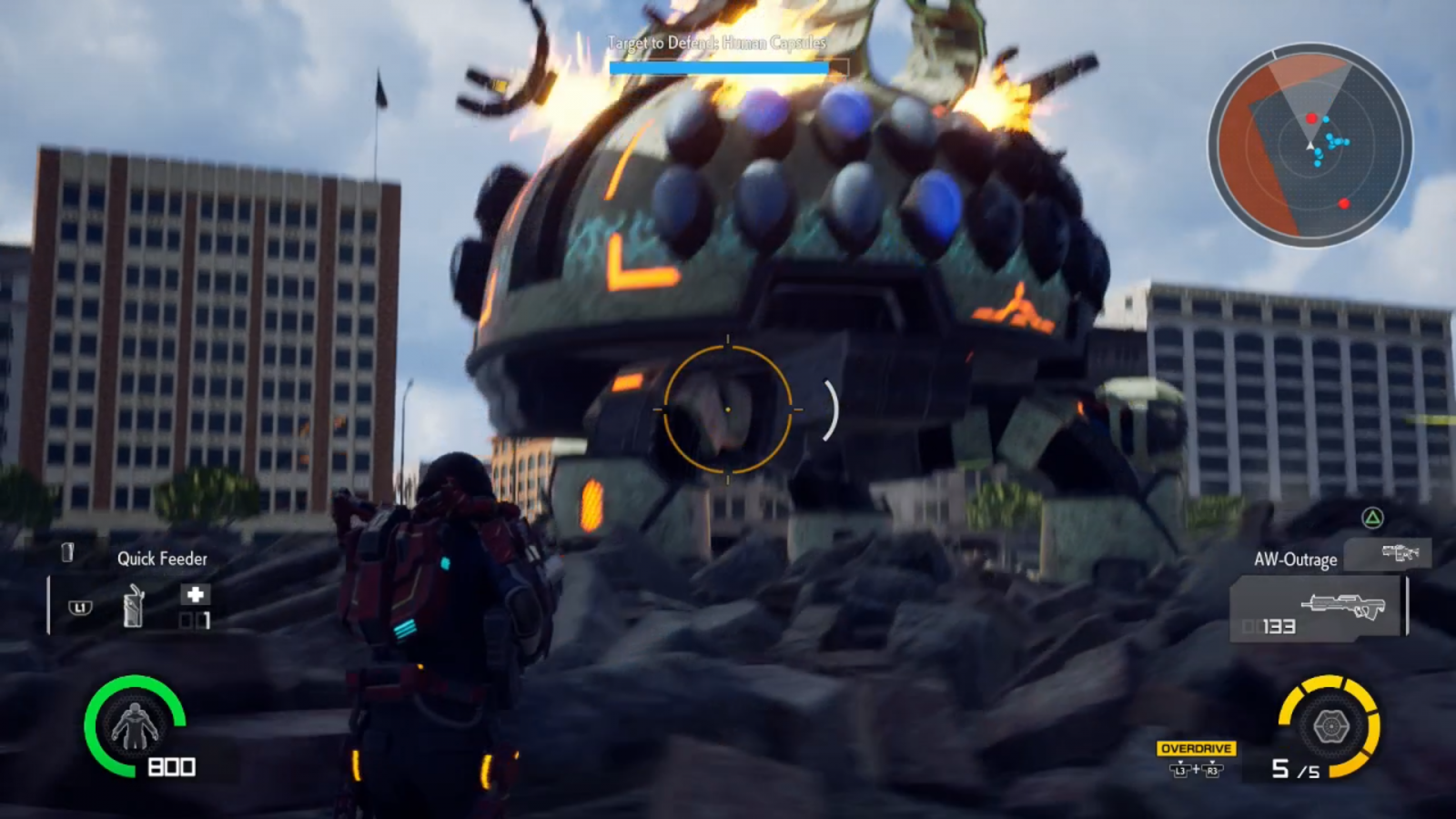 The gameplay is like any other third person shooter with a multitude of weapons to use. When you first start, you have slim pickings, but as you complete missions, you’ll unlock more weapons to use. You have to spend coins that you earn from missions along with gems that you can pick up from enemies in order to use them though. It’s a bit of a bummer that you have to unlock weapons in order to buy them, but that has become more common in games nowadays. The upside to this is that it helps create a feeling of progression when you slowly acquire better weapons. The variety of weapons is pretty nice too; you get to choose from assault rifles, shotguns, sniper rifles, swords, railguns, rocket launchers, and more. You have two weapon slots and can put whatever weapons you like in each of the slots. Being able to adjust your weapons to your playstyle makes the game more fun and lets you mow down enemies your way. You can also switch up your weapon slots before every mission, which lets you test out different setups.

One of the coolest aspects is the PA gear that you wear. This gear is an exoskeletal suit that acts as armor and allows you to perform special maneuvers by using energy. Energy regenerates over time when not being used, and if the meter is drained completely, the suit is overheated. When overheated, you get bogged down and are unable to use the special maneuvers until the meter completely refills. You can still walk normally, but you won’t be running anywhere. Basically, do your best not to overheat if you don’t want to leave yourself open to extra damage. The types of gear include trooper, jet lifter, heavy striker, and prowl rider. Each gear has its own defense, mobility, and ability. For example, the heavy striker has great defense, low mobility, and lets you use energy to temporarily put up an energy barrier, while the jet lifter has high mobility, low defense, and lets you use energy to fly around in the air. You’ll want to look at the mission before you start and decide what gear is the best for the situation. I personally opted for jet lifter most of the time, with heavy striker being a close second. 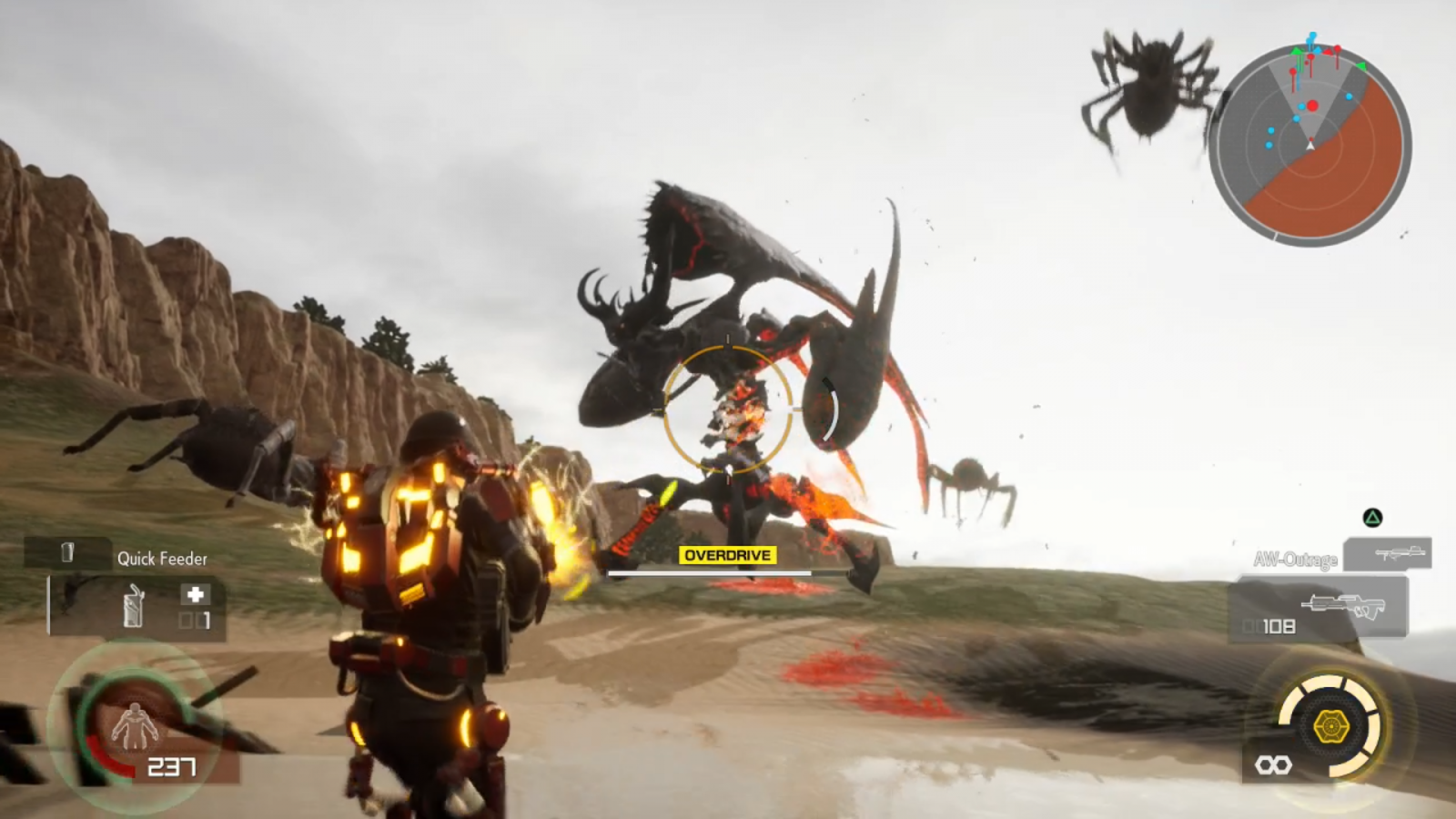 Even though running around and blasting away at large alien creatures is fun, Iron Rain has its problems. The biggest issue is the framerate; it isn’t always bad, but when enemy numbers rise too much, things get a bit clunky. The game prides itself on throwing groups of enemies at you and seeing how you handle them, which I love doing. Sometimes it can be a little overwhelming on the player and also on the game’s performance. It’s never gotten to a point where it slowed down the game to an unplayable state, but the number of framerate issues were enough to be mentioned. Even with this slowdown, I didn’t get bothered by it enough to want to stop playing. Other than that, the graphics and sound design are fine. The environments are large and offer plenty of space to engage the enemies in, which you’ll definitely need. 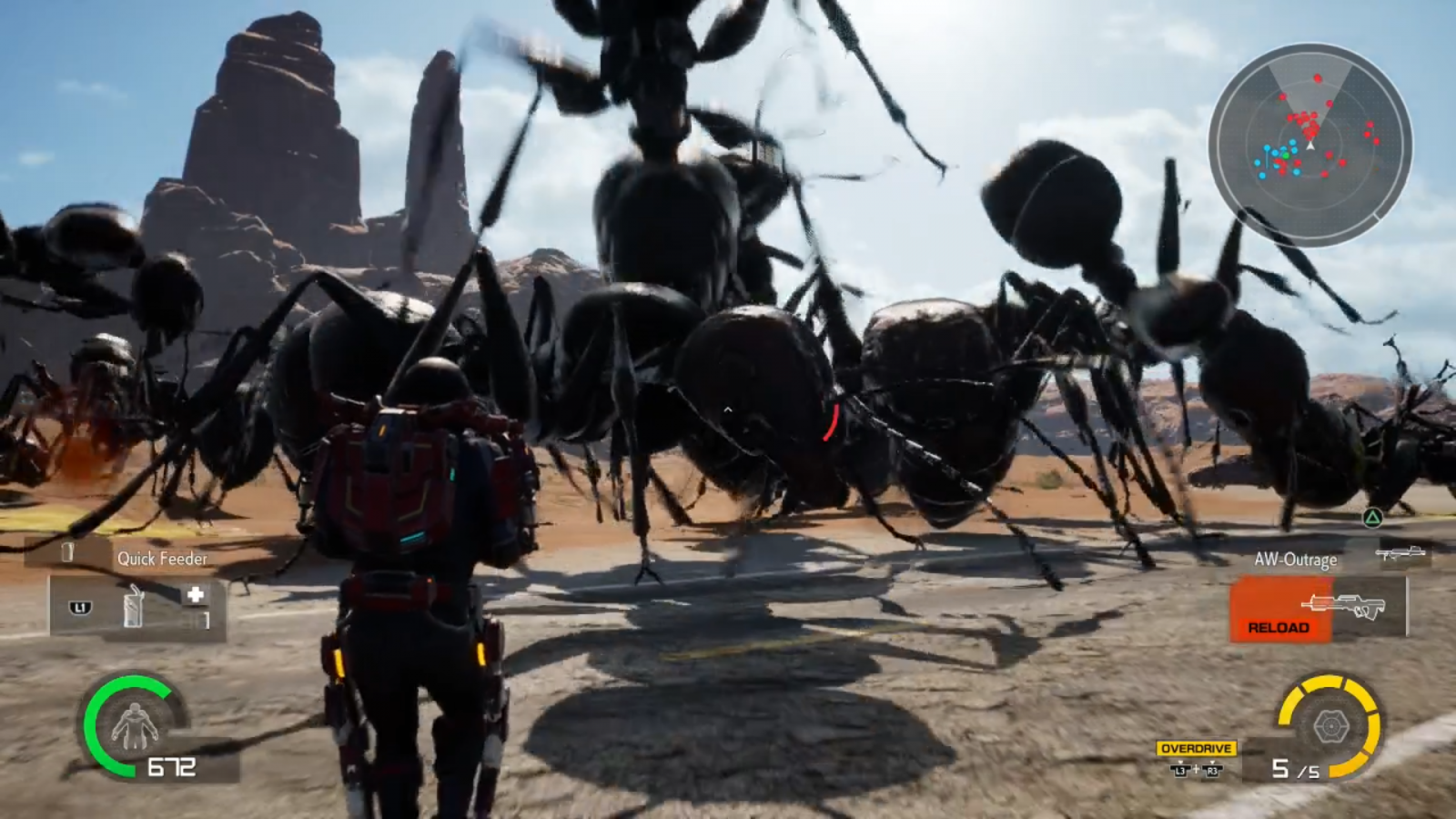 The campaign can be played solo, in local split-screen, and even through online multiplayer. I spent most of my time playing solo, but I did hop online to do some missions with other players. Taking on the Aggressors with a group of other players is a lot of fun, especially knowing that other people have your back. During the missions I played, I didn’t experience any lag or connection issues other than the usual slowdown from too many enemies. There’s also a mercenary mode where you can compete against other players to see who can collect the most gems from defeated enemies. Unfortunately, I couldn’t get into any games for this mode; the only games that I found were passcode locked for friends, and nobody joined the lobby that I made after my previous attempts failed.

Earth Defense Force: Iron Rain isn’t the best third person shooter out there, but it’s still a blast to play. The story isn’t its strong point, but the gameplay is the biggest draw. Firing into groups of large insects, mechs, and aliens while maneuvering around with exoskeleton suits makes you feel powerful. The framerate issues caused by too many enemies is a bit disappointing, but I’ve never had it reach dealbreaking levels.That being said, Earth Defense Force: Iron Rain is an enjoyable alien invasion based shooter that is worth your time if you can overlook its flaws.

Earth Defense Force: Iron Rain lets you blast away at hordes of alien enemies, making you feel powerful. The framerate drops when too many enemies appear, but it doesn't ruin the game. The story isn't very compelling, but manning your PA gear in combat makes up for that.

Codi loves to play video games and watch movies. He will watch almost any kind of movie just to experience them. His ideas take inspiration from the shows and movies he watches, and games he plays. He also loves a good pun.
Related Articles: Earth Defense Force: Iron Rain
Share
Tweet
Share
Submit