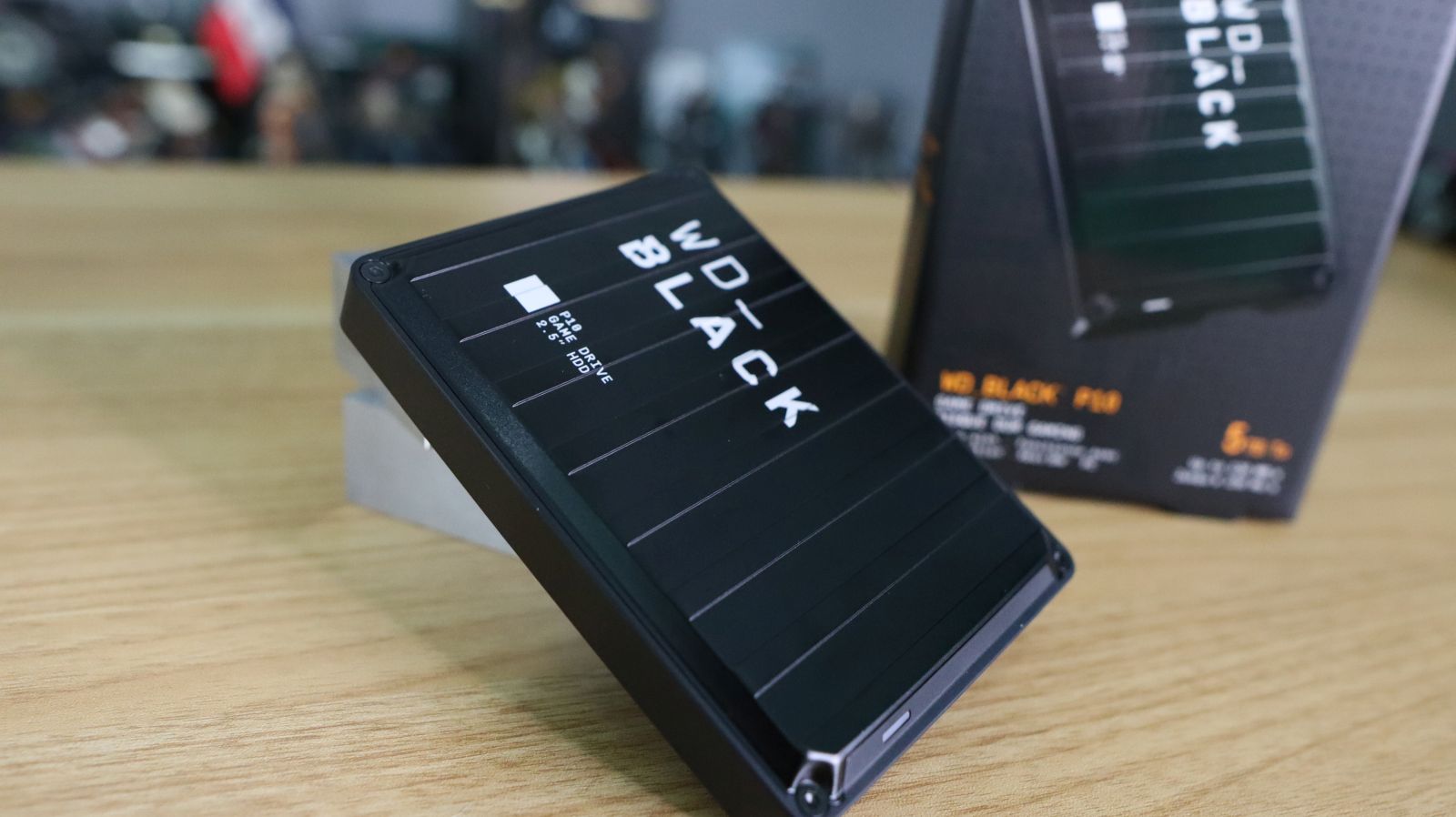 I’ve got a lot of hard drives, and each one has a specific purpose. I use a tiered system for my setup, with a NVMe PCIe 4.0 M.2 drive for my high speed workloads like video editing and gaming, an SSD for high-speed storage where blistering speed isn’t required but mid-tier speed is required, a fat spinning platter hard drive for large files that I access infrequently or aren’t speed-sensitive, and a frankly huge backup drive for “cold storage”. It’s a lot, but there’s one more drive I need – something portable. There are drives like the 1TB WD_Black P50 that are high speed, but the faster you go, the less space you’ll likely have, and sometimes you need that extra legroom. Enter the WD_Black P10 – an armored ultra-quiet 5400 rpm coming in at sizes up to 5TB that could be perfect for holding onto your precious memories, or transporting massive raw video files from here to there. We got our hands on the gaming-focused hard drive, benchmarked it, and put it through its paces. Without further ado, let’s get a closer look at the WD_Black P10.

It’d be unfair to make any kind of comparison without going over the numbers, including price, of the drives involved in the setup I mentioned above.

Looking at the price to performance ratio, there are obvious breakpoints – there’s a reason why larger drives are called “cheap and deep”. By way of comparison, the largest M.2 drive available is the Sabrent Rocket Q 8TB clocking in at an eye-watering $1,299. What I’ve tried to build is my attempts to balance that price to performance, but it still lacks portability. I have a thumbdrive, but frankly it’s getting largely insufficient as file sizes grow. An hour of capture at 4K and 144fps took up 56GB. The WD_Black 1TB P50 certainly does the trick, but at $188 at the time of writing versus 5TB of storage for $109, you can see that obvious price to performance intersection once again. 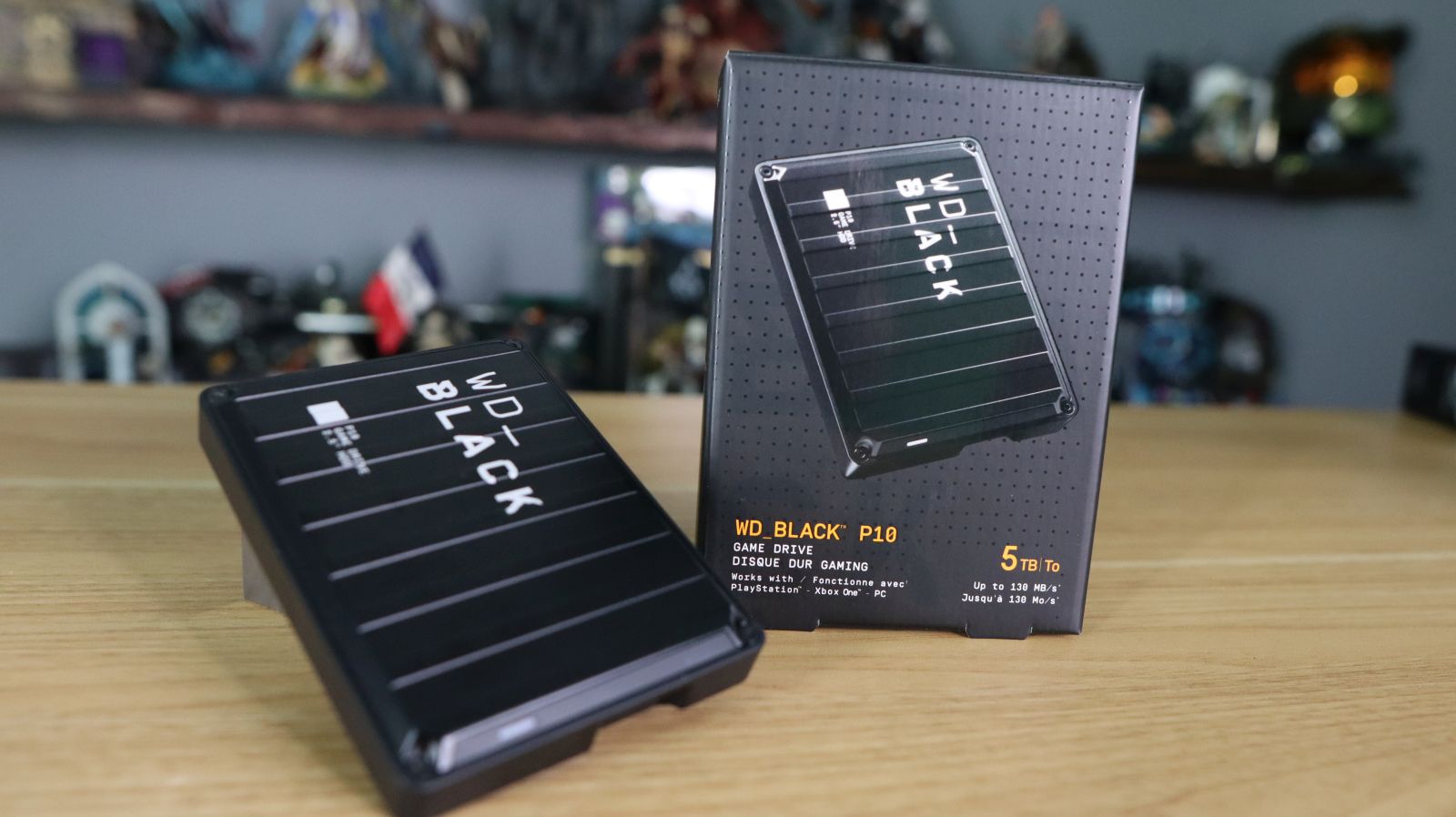 One of the things I like about the P10, especially since it’s a spinning platter hard drive, is the armored case. The 5400 RPM HDD is encased in what appears to be aircraft grade aluminum, with heat-dissipating ridges along the top. Measuring just 3.46″ x 4.65″ x 0.5″, it’s downright tiny. So much so that I had to double check that it’s actually a HDD inside and not an SSD. Connectivity is accomplished with a USB Micro-B to USB-A, something I wish the industry would abandon entirely in favor of USB-C. While it’s not going to offer any additional speed bonus (the Micro-B interface is 5Gbps after all – far faster than the mechanical drive could ever go), we’ve all got USB-C cables hanging around nowadays – it’d be nice to see other connection types dry up wherever possible. The cable is 1.8” in length, which is just right for my console, but very short for my PC, forcing me to leave it on top of the case rather than letting me locate it on my desk. A USB extension cable solves this problem, but a USB-C connector would give me a wider variety of choices, rather than having to buy a single-use USB Micro-B connector for this purpose.

With all the physical bits out of the way, let’s benchmark and see where we land. 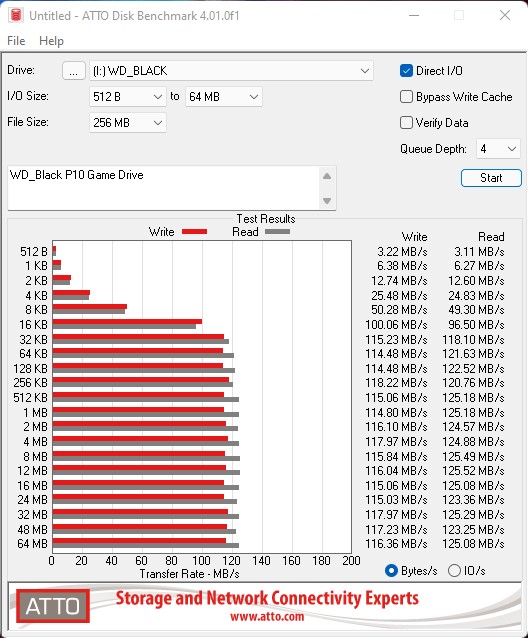 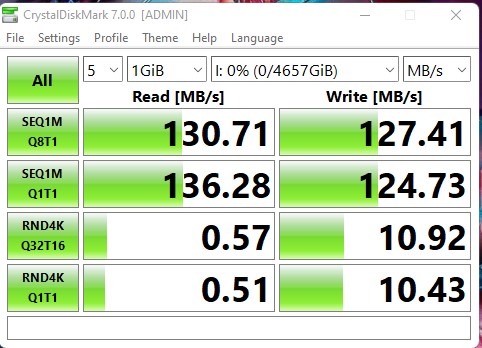 The performance from the drive is extraordinarily consistent. Despite having only 128mb of cache (256mb is the sweet spot), the drive delivers every bit of speed that a mechanical drive can possibly muster. Running this benchmark multiple times yielded almost exactly the same results, as did running it again after dropping a full terabyte of data onto it. It’s nice to see that level of consistency.

The Xbox Series X and S both use a proprietary card for storage, offering an additional 500GB, 1TB, or 2TB of high-speed storage. The PlayStation 5 is more flexible, using an additional high-end M.2 drive you can expand capacity. Both of those storage solutions are fairly expensive, and offer just a sliver of additional space for the money. External drives have a narrow use case for those platforms, allowing you to play and store Xbox One and PS4 games, as well as archiving those same games for rapid retrieval instead of re-downloading them. On the PlayStation 4 and Xbox One X you can use the P10 as you would the internal drive, playing, storing, backing up, and retrieving any game for those platforms. On all consoles the P10 can also store movies, music, or any other multimedia content you might want to have handy. On the PC, the drive operates as any other hard drive would – just plug it in, format it, and go to work. 5TB will hold about 140 games, based on each being 35GB. Obviously some games are far smaller, and a few are far larger, but that seems like a reasonable approximation as any, and far more than anyone would likely want to have installed at the same time. 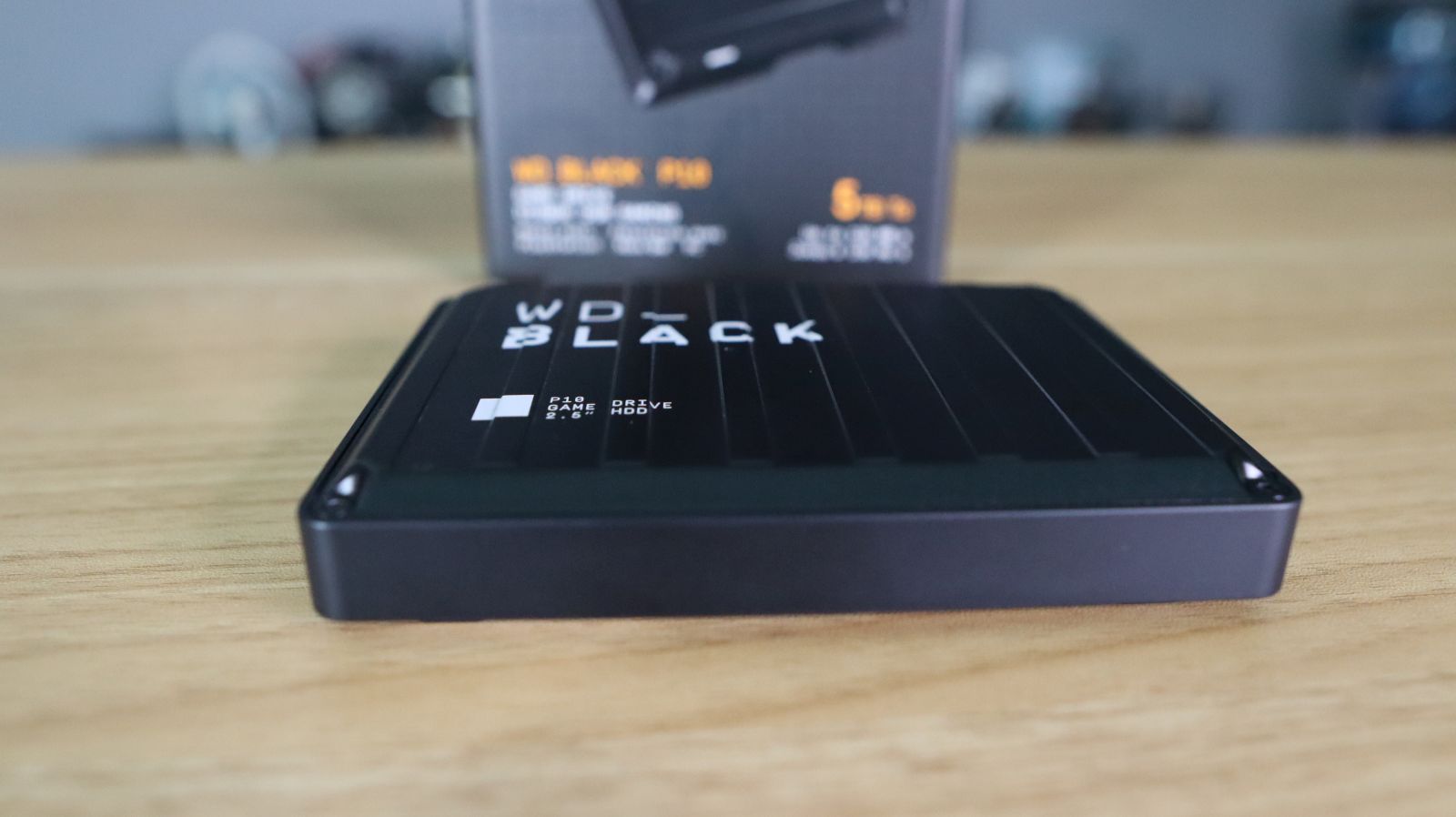 For real-world use cases, Rock Band 4 Rivals takes up about 8GB of space, and then every song is another 50MB. I have just shy of 1,000 songs (hey, don’t judge!) so that’s 50GB. Ghost of Tsushima on PS4 is another 60GB, Call of Duty: Modern Warfare is another 170GB, Destiny 2 is 187GB, NBA 2k22 is 108GB, The Elder Scrolls Online is 126GB, Red Dead Redemption 2 is 105GB – you can see how fast this all adds up. Just the items listed is enough to fill a 1TB drive to 70%, and exceeds the 500GB internal drive of the PS4 by over 200GB, but what about when you start adding movies? A 1080p movie will soak up between 4 and 8 GB in its native format, whereas a 4K movie is anywhere between 35GB and upwards of 100GB depending on content, extras and encoding. Sure, most folks use streaming services instead, but there are plenty of people happy to buy digital versions of their favorite films.

The last item on the list, and frankly it’s one of the most important, is the warranty. So many drives ship with sub-par warranties, with the terrible ones being as pathetic as 90 days. Here we see a 3-year warranty, with a free software suite in tow. The software suite, the Western Digital Dashboard Utility, will tell you your drive health, how much capacity is available, your firmware level, temperature, interface speed, overall drive health, and more. It’ll graph performance over time, allow you to use TRIM (it takes the “slack” out of your drive, scrubbing files flagged for deletion — essentially a defrag), and can be used to run a S.M.A.R.T. diagnostic.

Looking at the speeds above, you’ll need to assess your own use cases. Movies, music, and other multimedia will work at the slower speeds of a mechanical drive, and retrieving archived copies of games you don’t want to have to re-download (e.g. Red Dead Redemption 2, Destiny 2 between expansions, etc.) is always going to be faster than yanking it through the Internet again. While a game like Rock Band 4 won’t necessarily benefit from faster read speeds, a game like The Witcher III does in a big way. In that case, you’d use the P10 as backup, and the internal drive to play. If you are the indecisive type, swapping through a large backlog of titles, or you want to bring your games and movies with you on the go, the P10 could be exactly what you are looking for. If you only play a handful of titles, you might consider something faster like the truly excellent WD_Black P50 – it’s far faster, albeit with a much smaller capacity.

The P10 is listed as “Game Drive”, extending the life of the previous generation just a little bit longer while the market tries to overcome supply chain issues to get the newest gear into our hands. While its use case dwindles as we sunset the 8th generation consoles, there’s still very much a need for large file storage, at least in specific use cases.

Ron Burke is the Editor in Chief for Gaming Trend. Currently living in Fort Worth, Texas, Ron is an old-school gamer who enjoys CRPGs, action/adventure, platformers, music games, and has recently gotten into tabletop gaming. Ron is also a fourth degree black belt, with a Master's rank in Matsumura Seito Shōrin-ryū, Moo Duk Kwan Tang Soo Do, Universal Tang Soo Do Alliance, and International Tang Soo Do Federation. He also holds ranks in several other styles in his search to be a well-rounded fighter. Ron has been married to Gaming Trend Editor, Laura Burke, for 21 years. They have three dogs - Pazuzu (Irish Terrier), Atë, and Calliope (both Australian Kelpie/Pit Bull mixes).
Related Articles: Hardware, WD_Black P10 hard drive
Share
Tweet
Share
Submit