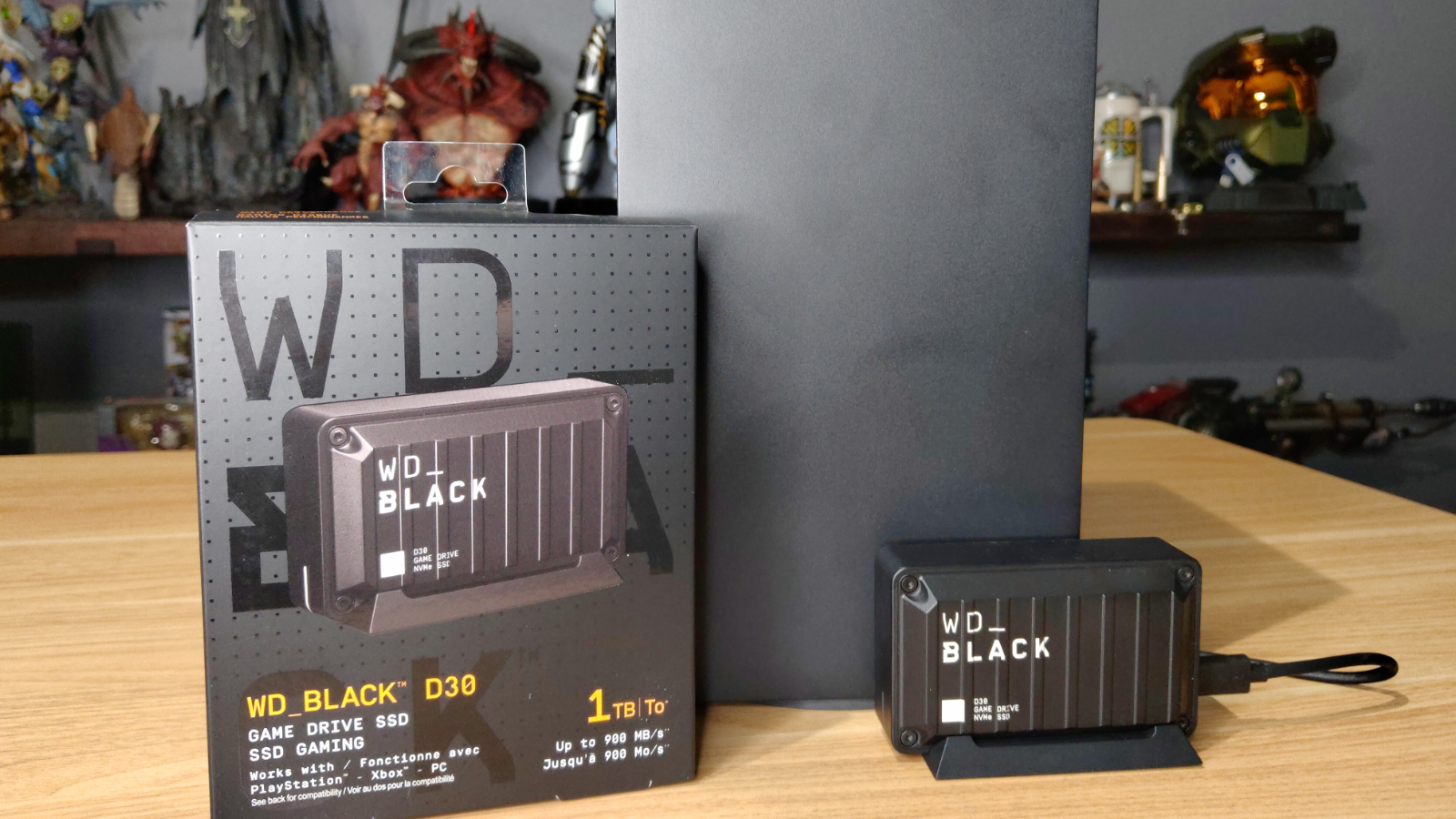 I’ve said it before, and I’ll say it again — it’s time to throw away those USB drives. You know the ones — the 500GB Toshiba you got as a door prize at the conference five years ago, the 250GB Crucial one you got with your laptop, and the 16GB novelty one that fits in the cute corporate toy/press kit that sits on your desk. All of them are trash, and I’m here to tell you why with a simple question: how much is your time worth? Those drives you still have? What speed are they? How long does it take to transfer files to and from them? When a 20GB file takes upwards of 20 minutes to copy to the drive, and another 20 to copy off of it before you can even start working on your project, you’ve gotta start to wonder if there’s a better way. Western Digital’s gaming division, WD_Black has released the D30 — a portable SSD with power to spare. Let’s benchmark it and truly calculate just how much time you might get back for more important things, and just how gamers might use this device.

The first thing you’ll notice about the D30 is that it is a highly ruggedized drive. Contained in an hard thermoplastic chassis painted black, the device features a similar look as their P10 drive from 2019, or the D50 game dock. The drive is slightly taller than a deck of cards — abnormally so, in fact. It’s nearly twice that of their D50 drive or competitor OWC’s Elektron — both of which are far faster (and more expensive) drives but at the same capacity. This is likely to ensure proper heat dissipation, but I can’t help but feel like a nice chunk of aircraft grade aluminum would do the trick while keeping it slim. Still — it will nestle nicely with Microsoft or Sony’s flagship consoles, or sit on your desk next to your PC. The included base for the drive to sit in is a nice touch, and greatly appreciated.

The drive is badged as a gaming drive, and is compatible with the PC, PlayStation, and Xbox, though the latter requires a little more explanation. You see, the D30 works perfectly on your brand new PlayStation 5 or Xbox Series X/S, but you’ll be limited on exactly what you can run from it directly. The Xbox Series X/S uses a proprietary drive that plugs into a port in the rear of the system, and the PlayStation 5 requires an M.2 SSD with speeds over 3500MB/s to be placed internally. That makes the WD_Black D30 great for storing media on either console, but there is one huge advantage — PlayStation 4 and Xbox One games.

The mechanical hard drives in the previous generation of consoles maxed out at a read and write speed of roughly 100MB/s — hardly blowing the doors off, but enough to get us great games like God of War, Horizon Zero Dawn, Red Dead Redemption 2, and The Witcher 3. On the Xbox One and PlayStation 4 you’ll be able to load those games on a drive with a read and write speed of 900 MB/s, making your load times disappear on the PlayStation 4 and Xbox One. If you are bringing those games forward to your Xbox Series X/S or PlayStation 5, you’ll be able to bring those same games, enjoy the same speed, and leave your expensive internal drives free for the next-gen native titles in your library. If you are playing Microsoft Flight Simulator, you know just how much space that game can take up — you now have an elegant solution.

Thanks to the way Microsoft and Sony handle archiving, you also have another option — archiving. Games like Spider-Man: Miles Morales can be archived, though not played from this drive. This lets you quickly move games off the more expensive M.2 storage on both platforms and onto this device, allowing you to juggle which games you keep installed without having to download the entire thing all over again. Crucial if your ISP has saddled you with a cap on your download capacities.

To achieve the 900MB/s read speed, you’ll need to connect this drive to a USB 3.2 Gen 2 port. That’s the 10 Gbps-capable connection sometimes denoted with a SS or Superspeed logo. When I performed this test on my system I hit speeds of 934 MB/s for read, and 835 MB/s for write, as you can see below — above the 900MB/s mark advertised on the box. If you are still rocking a USB 3.2 Gen 1 port you can expect that you’ll still cap out at an impressive 500MB/s. The Xbox Series X/S and PlayStation 5 both sport Gen 2 ports (you’ll want to plug into the back of the PS5 — the front ports cap out at 480MB/s), so you won’t have to worry about speeds there, but the Xbox One and PlayStation 4 are both USB 3.0, so that 500MB/s is as good as it’s going to get. You can thank the IEEE folks for making USB as confusing as humanly possible. 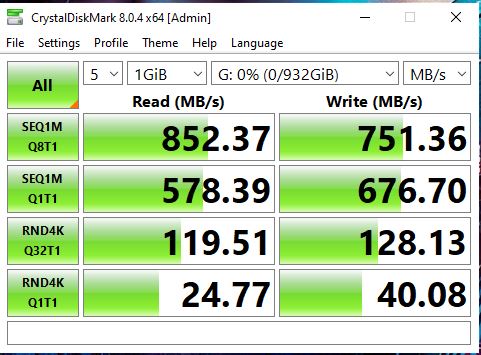 One thing of note is that the WD_Black D30 is a DRAMless drive. DRAM on the SSD allows the storage of a sort of “map” of where all of the objects on the memory cell are stored for faster access. Sounds like it would be incredibly important, right? Well, not so fast. In my testing I was unable to get any significant difference in read speeds on anything but the largest and most compressed file transfers. When pushing a single file weighing in at over 75 GB I began to see the smallest amount of speed degradation, but that’s not the use case for the D30. Even Call of Duty, notorious for massive file footprints, consists of a metric ton of very small files. Put simply, for read speeds, you aren’t going to see a difference with or without DRAM. Write speeds might be affected but only with large and sustained writes over time — again, not something you’ll normally encounter while gaming. Using a 1GB file size, I put that theory to the test using ATTO for a more in-depth look at write sizes over time. 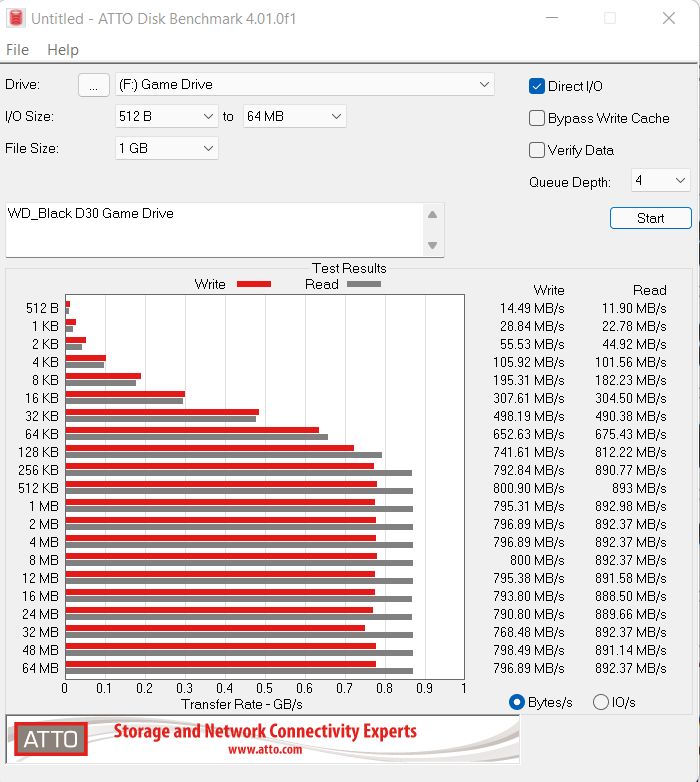 As you can see, the drive delivers remarkably consistent read and write speeds. Do enough research and you’ll likely read a whole lot about DRAM, but when rubber meets the road there is little to dissuade you from using them in practical applications. Sure, I wouldn’t render large video projects to it, but that’s not the purpose of this drive, now is it?

As with all of my SSD reviews, I’m a stickler for warranties. The WD_Black D30 comes with a robust 3 year warranty. We used to measure reliability in MTBF, or Mean Time Before Failure, but in reality this isn’t an overly useful way to calculate it. Instead, drives are now measured with CDL or Component Design Life and Annualized Failure Rate or AFR. This particular drive is a SanDisk SDSSDXPS960G SCSI Disk under the hood — the same as SanDisk’s Extreme PRO 960GB SATA commercial drive. It has a CDF of 5 years with an AFR of less than 0.8%, meaning it’s all but guaranteed to last well beyond the warranty — good news if you hold onto your systems for their full lifespan.

The WD_Black D30 comes in three different size varieties to fit your needs — a 500GB model, as well as a 1 and 2 TB variety. The 500GB drive will set you back $89.99, whereas the 1 and 2 TB versions will cost you $149 and $265 respectively. Of these sizes, the 1TB model feels like the right balance between cost and capacity. No matter which one you choose, there’s one thing that’ll immediately come to mind — why in the world did they include this stubby little cable? Measuring just a foot in length, there’s a good chance you’ll wish you had a little more cable length to put the drive where you want — more so if you plan to use this on PC.

The PlayStation 5 and Xbox Series X continue to be challenging to lay your hands on, and there are still a metric ton of fantastic games coming this year and next that’ll bridge the gap between these new consoles and their predecessors. Storage for both of those consoles is still exceedingly expensive, if they aren’t sold out thanks to the chip shortage that threatens to extend well into the distance. The WD_Black D30 is the perfect solution for this imperfect situation, delivering high-speed storage at a reasonable price. Better still, it’ll still be useful when you do eventually manage to pick up these new flagship consoles.

Built to bridge the gap between the previous generation of consoles and the current, the WD_Black D30 represents the perfect solution to speed up those older games, or to keep your newer games on tap when not on your primary storage.

Ron Burke is the Editor in Chief for Gaming Trend. Currently living in Fort Worth, Texas, Ron is an old-school gamer who enjoys CRPGs, action/adventure, platformers, music games, and has recently gotten into tabletop gaming. Ron is also a fourth degree black belt, with a Master's rank in Matsumura Seito Shōrin-ryū, Moo Duk Kwan Tang Soo Do, Universal Tang Soo Do Alliance, and International Tang Soo Do Federation. He also holds ranks in several other styles in his search to be a well-rounded fighter. Ron has been married to Gaming Trend Editor, Laura Burke, for 21 years. They have three dogs - Pazuzu (Irish Terrier), Atë, and Calliope (both Australian Kelpie/Pit Bull mixes).
Related Articles: Hardware, WD_Black D30 SSD
Share
Tweet
Share
Submit